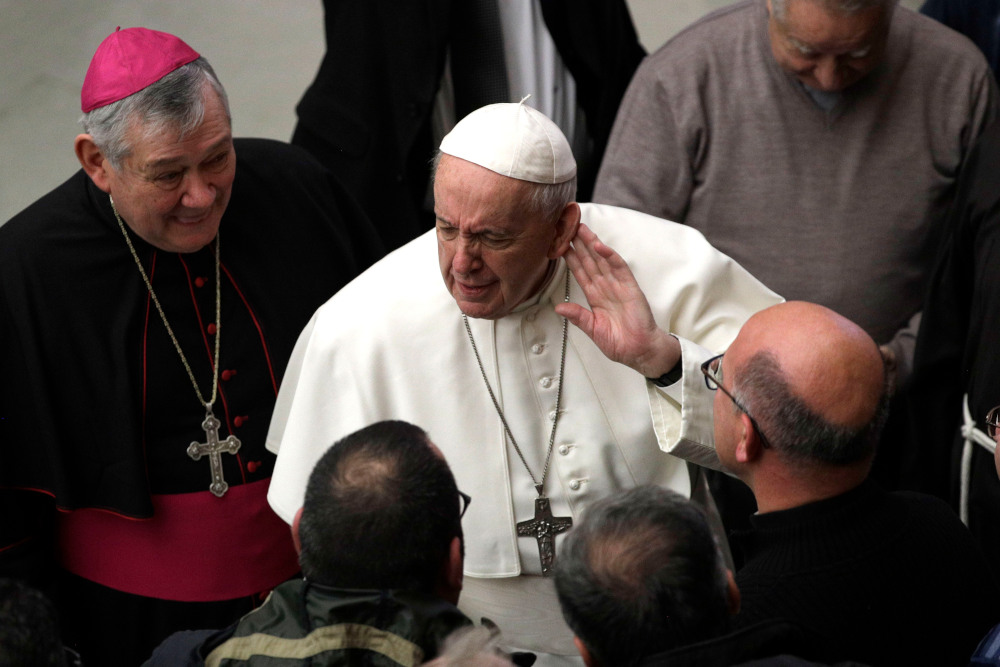 Pope Francis touches his ear as he meets faithful in the Paul VI Hall at the Vatican during his weekly general audience, Wednesday Jan. 22, 2020. (AP/Gregorio Borgia)

The Vatican women's magazine is blaming the drastic drop in the number of nuns worldwide in part on their wretched working conditions and the sexual abuse and abuses of power they suffer at the hands of priests and their own superiors.

"Women Church World" dedicated its February issue to the burnout, trauma and exploitation experienced by religious sisters and how the church is realizing it must change its ways if it wants to attract new vocations.

The magazine published Thursday revealed that Francis had authorized the creation of a special home in Rome for nuns who were kicked out of their orders and all but left on the street, some forced into prostitution to survive.

"There are some really tough cases, in which the superiors withheld the identity documents of the sisters who wanted to leave the convent, or who were kicked out," the head of the Vatican's religious orders congregation, Cardinal Joao Braz di Aviz, told the magazine.

"There were also cases of prostitution to be able to provide for themselves," he said. "These are ex-nuns!"

"We are dealing with people who are wounded, and for whom we have to rebuild trust. We have to change this attitude of rejection, the temptation to ignore these people and say 'you're not our problem anymore.''"

"All of this must absolutely change," he said.

The Catholic Church has seen a continuing free fall in the number of nuns around the world, as elderly sisters die and fewer young ones take their place. Vatican statistics from 2016 show the number of sisters was down 10,885 from the previous year to 659,445 globally. Ten years prior, there were 753,400 nuns around the world, meaning the Catholic Church shed nearly 100,000 sisters in the span of a decade.

European nuns regularly fare the worst, Latin American numbers are stable and the numbers are rising in Asia and Africa.

The magazine has made headlines in the past with articles exposing the sexual abuse of nuns by priests and the slave-like conditions sisters are often forced to work under, without contracts and doing menial jobs like cleaning for cardinals.

The drop in their numbers has resulted in the closure of convents around Europe, and the ensuing battle between the remaining sisters and diocesan bishops or the Vatican for control of their assets.

Braz insisted the assets don't belong to the sisters themselves, but the entire church, and called for a new culture of exchange, so that "five nuns aren't managing an enormous patrimony" while other orders go broke.

Braz acknowledged the problem of nuns being sexually abused by priests and bishops. But he said in recent times, his office has also heard from nuns who were abused by other nuns — including one congregation with nine cases.

There were also cases of gross abuses of power.

"We've had cases, not many thank goodness, of superiors who once they were elected refused to step down. They went around all the rules," he was quoted as saying. "And in the communities there are sisters who tend to blindly obey, without saying what they think."

The international umbrella group of nuns has begun speaking out more forcefully about the abuses of nuns and has formed a commission with its male counterpart to take better care of their members.