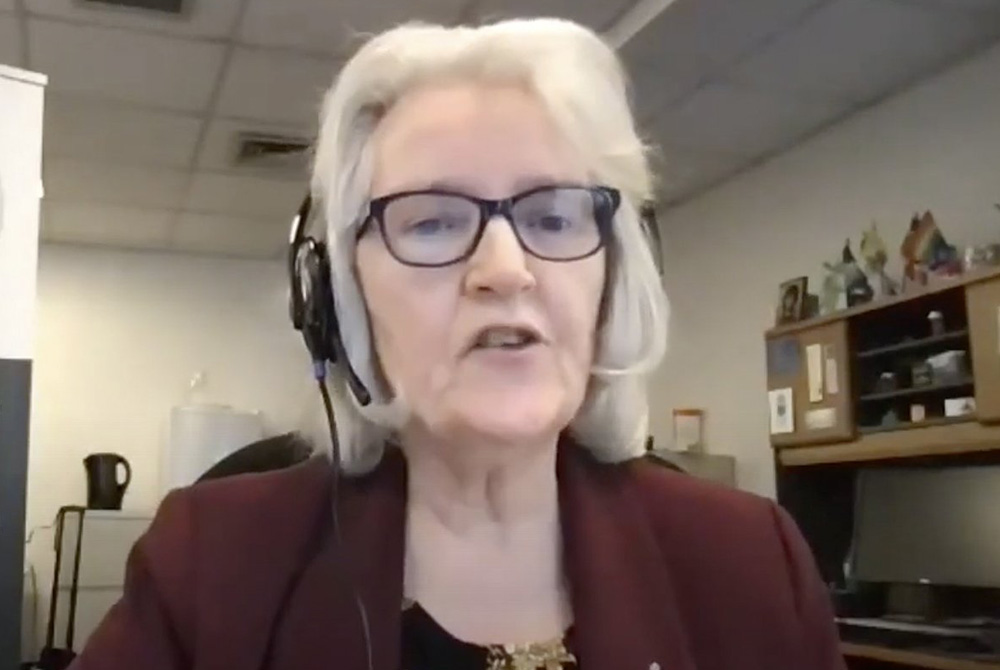 Sr. Winifred Doherty, who is the U.N. representative for her religious order, the Congregation of Our Lady of Charity of the Good Shepherd's Mid-North America province, speaks March 8, during a two-day virtual "Shine the Light" conference on human trafficking. (CNS screenshot/YouTube, National Advocacy Center)

Spotlighting the root causes and intersections of human trafficking, the Shine the Light virtual conference demonstrated the range of people and concrete actions needed to combat trafficking effectively.

The March 8-9 webinar, for which more than 450 people registered, included a variety of voices: survivors with moving testimonies; sisters experienced in helping victims create new lives; experts who can speak to the unseen complexities exacerbating the problem; legislators who pass bills to curb the causes; and religious organizations and volunteers who raise awareness by localizing the issue. Hosted by the Sisters of the Good Shepherd National Advocacy Center, the conference began on International Women's Day. 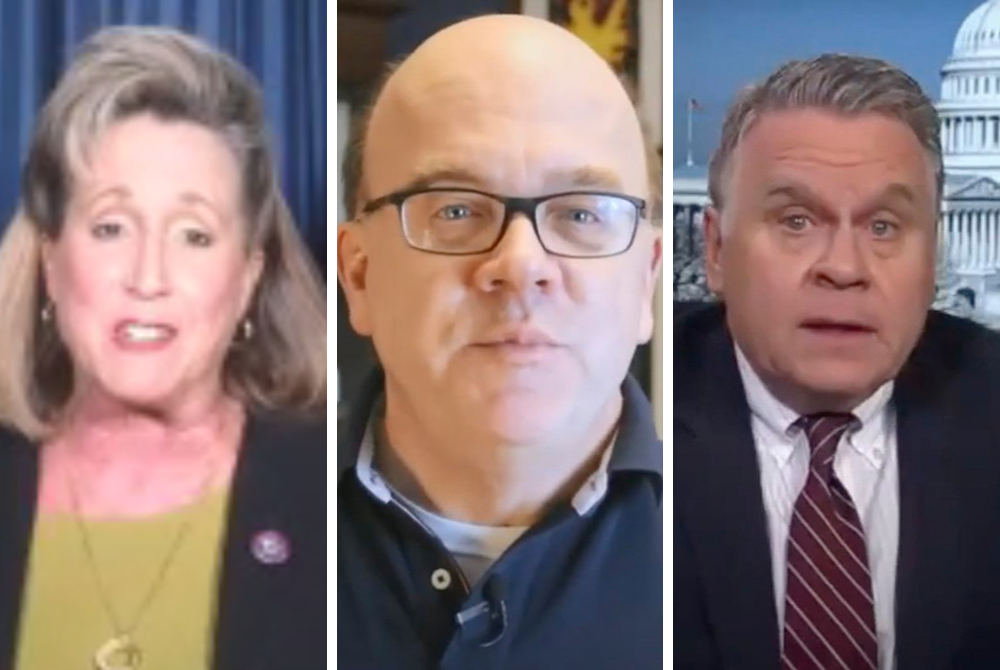 In the spirit of bipartisanship, the conference invited its four congressional honorary co-chairs to address attendees throughout the webinar: Rep. Ann Wagner of Missouri; Rep. James McGovern of Massachusetts; Rep. Chris Smith of New Jersey; and Rep. Jamie Raskin of Maryland (not pictured). Raskin could not attend, but a statement from him was read to conference attendees. (GSR, CNS screenshots/YouTube, National Advocacy Center)

Speaker Sr. Winifred Doherty, who represents the Congregation of Our Lady of Charity of the Good Shepherd's Mid-North America province at the United Nations, emphasized how economic systems and forced migration compound the issue of labor and sex trafficking, with marginalized groups such as non-white people most often falling prey.

Doherty considered how the coronavirus pandemic has shone a light on the "fault lines in society, showing ever more clearly the structural and systemic issues that we have known, ignored or chosen not to address," she said.

The looming threat of climate change, which also is without regard for borders and boundaries, is simultaneously exposing similar inequalities, Doherty added. She also highlighted the Black Lives Matter movement in the United States that experienced a rebirth in the summer of 2020 following notable deaths of Black individuals at the hands of police.

In a condemnation of neoliberal capitalism, Doherty said militarization, globalization, financialization, corporatization, commodification and digitalization are all behind the root causes of exploitation, which she summarized as the "five P's": pleonexia (greed and avarice), privilege, pleasure, power and profit.

"Meeting needs is important, highlighting the issues of exploitation in human trafficking is important, but we must connect with and challenge the very system that perpetuates such abuses, exploitation and injustices including gender inequality," she said in conclusion. "We must look at the big picture — the interconnectedness of the web of all existence — the planet and its peoples." 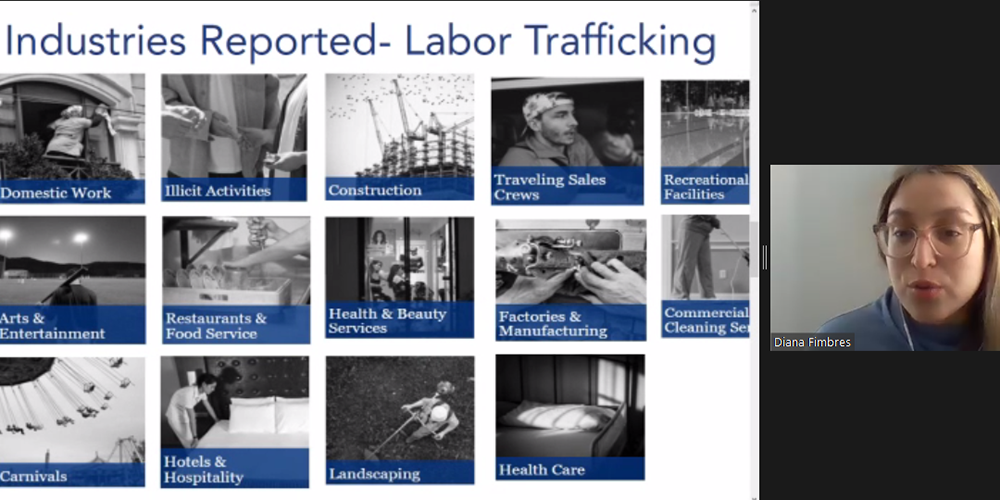 Diana Fimbres, program manager of strategic initiatives on labor trafficking for the Polaris Project, hosts an education seminar highlighting the psychological effects of trafficking and the industries most likely to be complicit as part of the March 8-9 Shine the Light virtual conference. (GSR screenshot)

Missionary of Jesus Sr. Norma Pimentel illustrated Doherty's point of interconnectedness as she shared her experiences ministering to migrants on both sides of the U.S.-Mexico border. Pimentel, the conference's special guest, spoke of the mistreatment and abuse migrants encounter on one side of the border only for it to continue when they cross frontiers. As a "woman of God," she said she feels called to restore their sense of human dignity.

Pimentel choked back tears of joy as she shared her experience witnessing refugees in the Matamoros, Mexico, camp finally cross the bridge into the United States last week after two years of living in uncertainty, having fled their homes but being unwelcome in the States.

"I just hope, never again; never should we allow for something like that to happen," Pimentel said.

"We have the responsibility as people of God to hold each of us accountable for doing what needs to happen to stop the abuse, stop a society that destroys life, that hurts people. It is our responsibility, and we start by accompanying them, by being part of their journey, and then by offering how we can correct this to make sure this doesn't happen anymore." 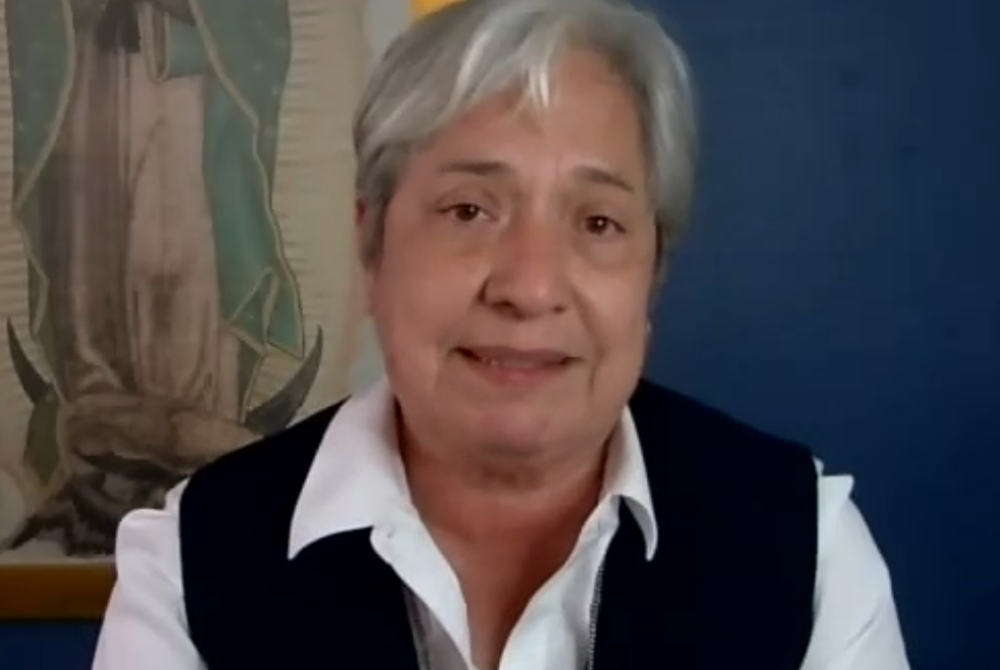 Through tears, Missionary of Jesus Sr. Norma Pimentel shares the necessities of preventing atrocities like the refugee camp in Matamoros, Mexico, from happening again with the March 8-9 Shine the Light virtual conference. (GSR screenshot)

Lured by the prospect of a lucrative sewing job that would help her support her children in Mexico, Flor Molina told webinar attendees how she wound up enslaved in the United States for 40 days, working 18 hours a day sewing dresses to pay her trafficker, a woman who possessed all of Molina's legal documents and forms of identity.

She slept on the floor of the factory, had one meal a day and was forbidden to speak with the other workers. When Molina was given permission to attend church one day, she managed to escape. With help from FBI agents and the Coalition to Abolish Slavery and Trafficking, Molina rebuilt her life and eventually became an advocate for trafficking victims and the recipient of the 2018 Fashion for Freedom Award. (Her trafficker was eventually charged with labor abuse and received six months of house arrest.)

Molina and Melanie Thompson — a trafficking survivor who was sold into prostitution at the age of 12 and now advocates for the end of commercial sexual exploitation — served to remind attendees of the individual stories behind the issue, which often can feel too overwhelming to address when only discussed on a macro scale. Others, like Sr. Christine Truong, executive director of Good Shepherd Services Atlanta, shared how their congregations or organizations were able to rescue individuals who felt trapped in exploitative and abuse jobs and relationships.

During the conference's second day, which focused on calls to action, Hilary Chester and Kara Griffin put forth concrete suggestions for anti-trafficking advocates to bring to their parish. Chester is the associate director of the U.S. Conference of Catholic Bishops' Anti-Trafficking Program, and Griffin helped organize the anti-human-trafficking task force in the Diocese of Charlotte, North Carolina.

The panel highlighted a few U.S. parishes that can serve as examples for how to raise awareness and help trafficking survivors through efforts in local churches.

The St. Francis of Assisi Parish in Triangle, Virginia, for example, built relationships with local and state organizations and leveraged the professional experience skills of its parishioners to deepen the parish's engagement efforts on the issue. Griffin's diocese sells artisanal crafts from anti-trafficking advocacy groups, such as cards that survivors made by hand, at parish gift shops. In addition to raising money for the artisans, the sale also raises awareness: Each card comes with the survivor's personal story.

Parishes can also collect donations, such as the build-a-backpack drive that the Diocese of Orlando Human Trafficking Task Force organizes to provide toiletries and other basic necessities for trafficking survivors as well as other groups that collect bras for women in developing countries to sell, allowing them the option to start a small business with female-only customers.

In addition to utilizing social media, handouts and toolkits, another way to gain potential support on the issue is to write directly to figureheads in the church, such as the local bishop, Griffin said. When her diocese wrote to their bishop, Charlotte Bishop Peter Jugis, requesting greater focus on human trafficking, his support led to the development of Griffin's current anti-trafficking task force under Catholic Charities' Respect Life Center.

Griffin also recommended inviting survivors to speak at local parishes. When her St. Matthew's Parish hosted an FBI agent and a survivor, two local news stations covered the event, expanding the reach of their awareness-raising event around child trafficking and the dangers posed online.

The sum of the conference's speeches affirmed Doherty's speech that opened the conference, calling on all to tackle the many individual causes that ultimately contribute to the phenomenon of trafficking.

But those committed to confronting trafficking must also be honest about the larger systems that insidiously allow exploitation to prosper, she said.

"We must raise our voices for new systems and new structures that seek to uphold the sacredness of life through advocating for economies of care, gender justice, eco-justice and social justice." Doherty said.

"If we fail to do this, we are merely addressing symptoms but not the root cause. Once we make the connection, once we see the intersections and move beyond the symptoms, then we are truly on a journey of change."

The conference's co-sponsors included the Columban Center for Advocacy and Outreach, the Leadership Conference of Women Religious, the Sisters of Mercy of the Americas' Justice Team, the U.S. Catholic Sisters Against Human Trafficking, and the U.S. bishops' Office of Migration and Refugee Services.