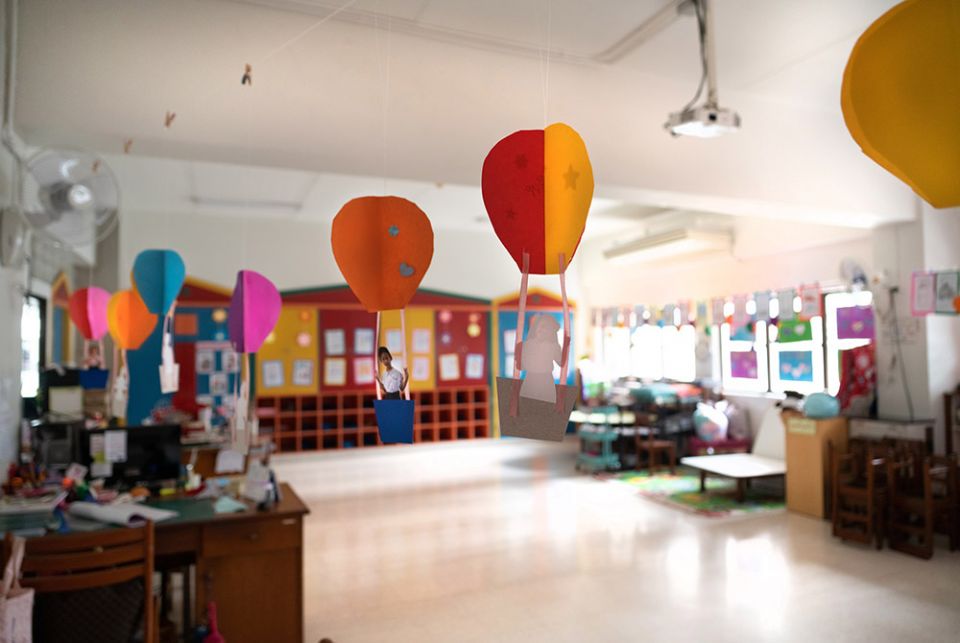 Craft balloons hang across a kindergarten classroom, each holding a cutout of a student, at Mater Dei School in Bangkok. (Guy Wagner)

Bangkok — Hot and smog-filled, Bangkok swells to around 12 million inhabitants daily as people travel into the city for work. Whether they know it or not, most commuters pass by the gates of the Mater Dei School's large complex directly beneath Bangkok's modern Chit Lom Skytrain station. The complex is a calm and verdant sanctuary in the heart of a bustling, affluent financial district.

Thailand has a population of more than 68 million, of which Buddhism accounts for 94.6%. At 388,000 strong, the Catholic community stands at a little more than 0.5%.

Yet Mater Dei, an all-girls K-12 Catholic school founded in 1928 and run by the Ursuline Sisters of Thailand, is thriving.

Bangkok is the location of Mater Dei School

Mater Dei School is located in Bangkok, Thailand. Bangkok swells to around 12 million inhabitants daily as people travel into the city for work. (Guy Wagner)

Besides a first-class education, the sisters teach through the lens of their founder St. Angela Merici's moral principles and in keeping with the spirit of the motto "Serviam," Latin for "I will serve," a motto common to many Ursuline groups. A badge adorned with "Serviam" is on the school's walls, books and uniforms.

Of 1,960 students, about 500 are Catholic, 10 Muslim, 20 Protestant and 20 Sikh, leaving 1,410 Buddhists, reflecting former principal and school administrator Sumitra Phongsathorn's desire for the student body to be somewhat representative of the population. Every year, 700 applications are submitted for 120 kindergarten spaces. 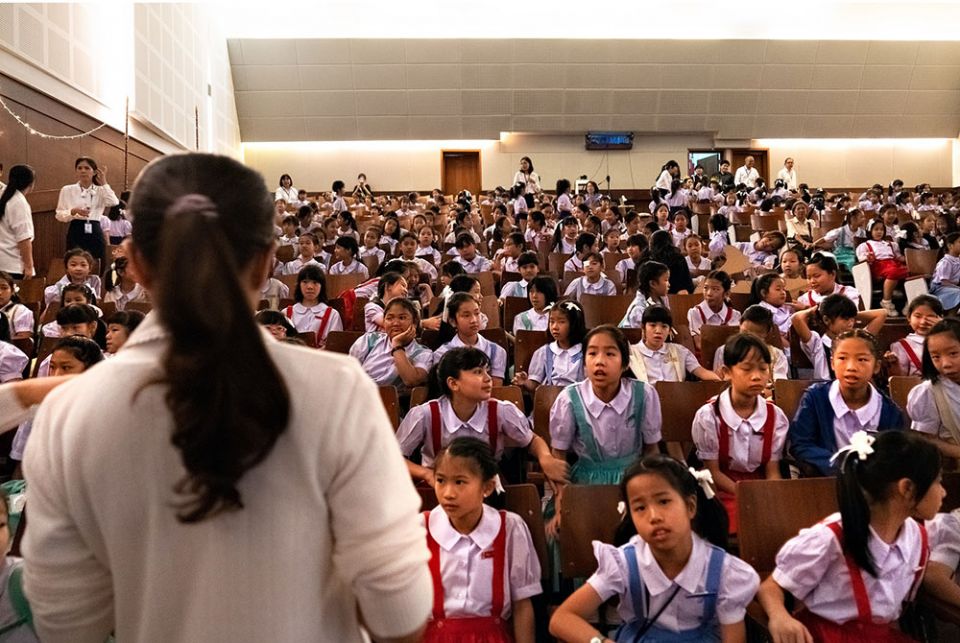 Of the 175 full-time teachers at Mater Dei, 30 are non-Thai language educators. The eight Ursuline sisters involved in running the school largely focus on liturgy classes, administration and policy.

Each morning, after the national anthem and prayer, the students read a proverb from St. Angela in Thai, English, French and Mandarin.

US teacher talks about Ursulines at Mater Dei

Spencer Smith, a U.S. teacher from Lincoln, Nebraska, talks about the Ursulines at Mater Dei School in Bangkok. (Guy Wagner)

Students take part in service activities, including weeklong trips by entire grades to visit refugees on the border with Cambodia, where Mater Dei has 12 sister schools, and northern mountainous hill tribes of Phayao, where familial human trafficking has been prevalent.

Other forms of service happen every day in Chiang Mai city, where a group of around 15 Mater Dei students visit orphans and people who are blind or deaf.

"All Catholic schools in Thailand start off with a good reputation for teaching English," Phongsathorn said.

Though Phongsathorn is not a sister, the Ursulines describe her as having Ursuline DNA: She attended Mater Dei from the age of 4, then later, at the behest of then provincial superior Sr. Somchitr Krongboonsri (now superior of the northern communities), she was the first layperson to attend an Italian retreat meant to acquaint Ursuline sisters with the life and teachings of St. Angela. Phongsathorn has since brought five religiously diverse groups of teachers on this monthlong retreat.

At Mater Dei, "you don't have to talk about [St. Angela's] God, but you talk about her. You give her as an example," Phongsathorn said. "You have to smell the people, smell the atmosphere. You bring love and compassion to them, and God is already there. You don't have sets of belief that you force on people."

Most students pray together, though non-Catholics generally do not attend Mass or liturgical classes.

On a trip to Thailand in 2019, Pope Francis came with the message of inculturation. In a speech addressing the perception that Catholicism is for foreigners, he said: "Let us give faith a Thai face and flesh."

Phongsathorn said Thai tradition dictates deep reverence for any and all things spiritual, which may explain the cohesion Mater Dei students experience despite the differences in religion.

"They have respect for anything sacred — a tree, God, anything sacred. You don't question it," said Tina-Marie Paladiganont, current Mater Dei principal. "Students never make fun or bring science into it."

Sr. Suwanna Chaipornkaew talks about student interest in converting to Catholicism. She speaks about a student who came to her with an interest in becoming Catholic. Chaipornkaew, working with the student and her family, guided the girl. (Guy Wagner)

Krongboonsri acknowledges that Ursuline vocations here have been dwindling, but she said the sisterhood has always been small. Nearly all vocations come from students of Ursuline schools. Never more than 50 Ursuline sisters, the community now has 34 sisters throughout Thailand, of which eight are at Mater Dei in Bangkok.

"It's like in the States, where laypeople are running the school," Krongboonsri said. "[Sisters] may be training people to take over in New York and Australia."

Krongboonsri said she sees this same trend of laypeople in important administrative roles at Ursuline schools in Thailand.

"They have the Angela spirit," she said. 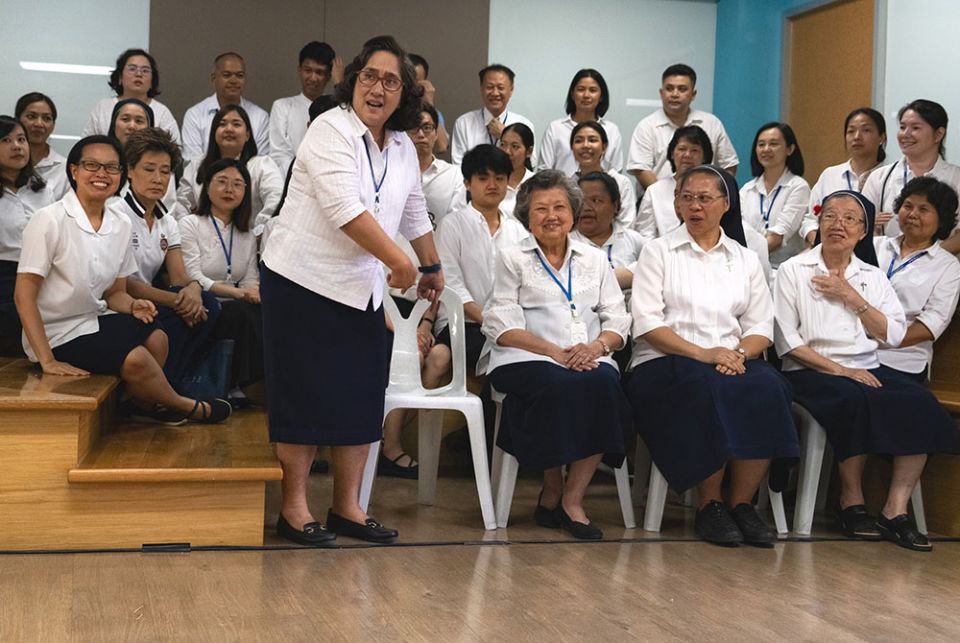 In 1965, the Second Vatican Council's ecumenical mandate of religious dialogue opened the door to a more flexible Catholic practice. In the 1980s, an American Ursuline named Mother Marie Theodore Hahnenfeld traveled to a forest monastery in southern Thailand to study for a month with famous monk Buddhadasa Bhikkhu at Suan Mokkh. This was at a section of the monastery specially designed for non-Thai to learn Buddhism.

At the time, many Thai Catholic teachers found meditation a natural way to prayer but wouldn't dare meditate because they thought it contravened their faith, Phongsathorn said. Following Hahnenfeld's example, many Ursulines and Catholics traveled to Suan Mokkh to learn meditation.

While some older Mater Dei teachers still refuse meditation, Phongsathorn said, "It helps to be able to be quiet in prayer, to enter yourself to listen to God."

These successes are still a work in progress. Adil Pakkidharm, a devout Muslim science teacher of Egyptian descent, has been advocating for better access to daily prayer and more cultural competency at Mater Dei. He has refused to participate in the Thai tradition where students bow to their teachers because he said that action is reserved for God.

"We need to learn more" when it comes to cultural competency, Phongsathorn said. Phongsathorn now brings Pakkidharm to speak about the Islamic faith at a seminar course for Catholic school administrators put on by the Catholic Education Council in Bangkok.

Early on at Mater Dei, Buddhism had only one teacher, Ursuline Mother Bunpra Chahk Dadarananda. She was also the first Thai Ursuline, and in later years, she advocated for expanding the school's Buddhist lessons, saying: "We are all Thai. If you are Thai, you need to know Buddhism."

Principal Paladiganont ends our conversation by asking, "How do we help the nuns carry the torch? How do we go on?" She said besides praying for more vocations, both laypeople and Ursulines have to work toward passing on the spirit of Serviam.

[Guy Wagner is a visual journalist and writer from Hawaii currently based in Minneapolis, Minnesota.]

Can memorized prayers turn you into a prayer robot?

Lent is a time of listening