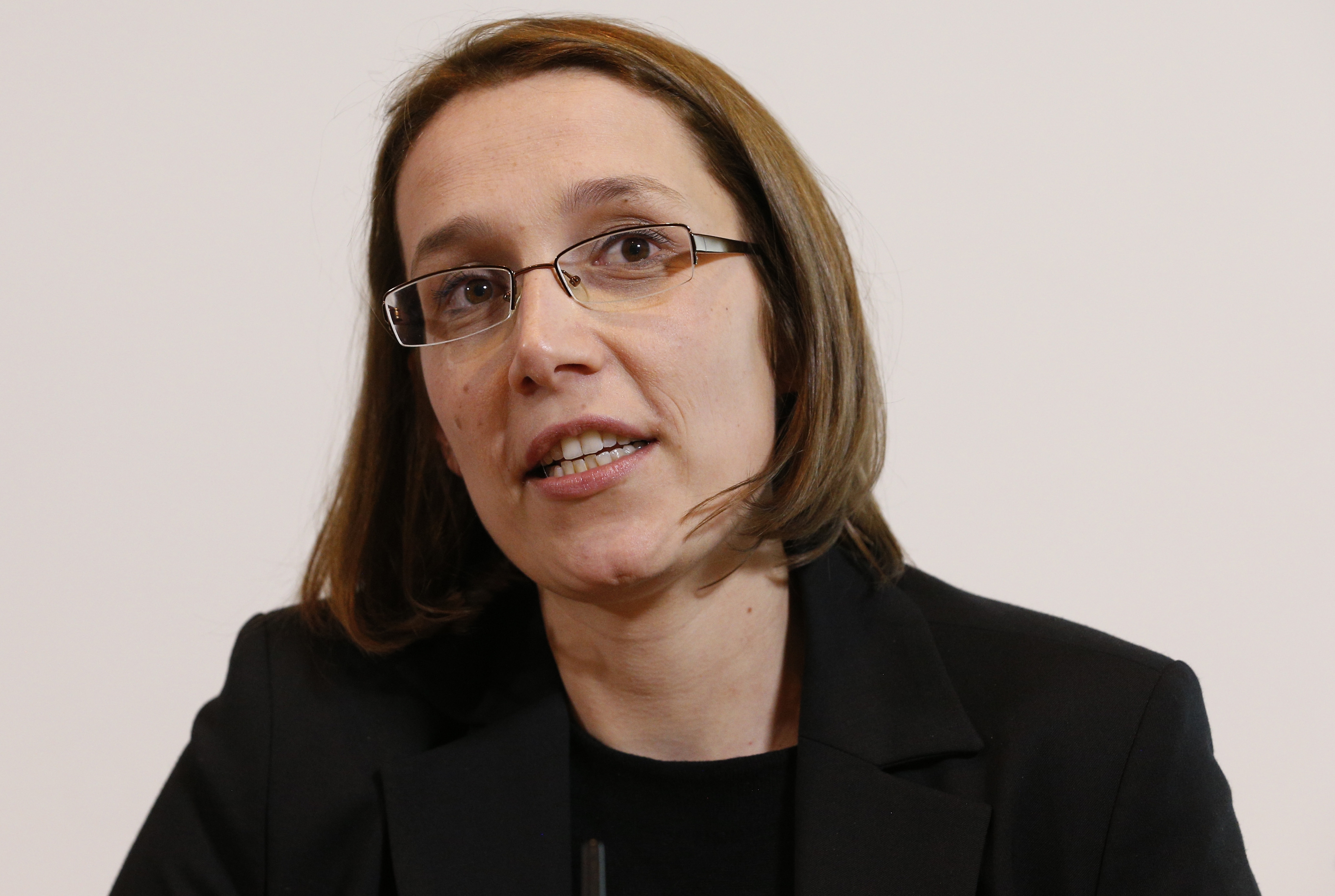 Doris Reisinger is one of four speakers in a webinar series on spiritual abuse on April 28 and May 18 by the Union of the European Conferences of Major Superiors. Reisinger was the recipient of the 2020 Christine Schenk Award for Outstanding Young Catholic Leadership by FutureChurch for her testimony and writings about spiritual and sexual abuse of women, particularly women religious, by clergy.

She has also been critical of "the structures and culture that keep most women in a position of unquestioning obedience to a superior," as FutureChurch notes. That culture, she said in her address (under her former name Doris Wagner) at the Voices of Faith event "Overcoming Silence - Women's Voices in the Abuse Crisis" in November 2018, is what prevented her from speaking out for two years about her own case of being raped by a priest. She had entered religious life at age 19, and was raped five years later, just months after professing her vows, she said. She left religious life in 2011.

While a vowed religious, she said during the Voices of Faith event, she was also solicited for sex in a confessional by another priest, who held a position with the Congregation for the Doctrine of the Faith. Austrian theologian Fr. Hermann Geissler denied the incident but left the CDF in January 2019 after the allegations became public. A Vatican tribunal acquitted him in May 2019 without taking oral testimony from Reisinger, though she was allowed to submit written testimony.

Reisinger, who holds a doctorate in philosophy, teaches at Goethe University in Frankfurt, Germany, and is also one of 12 researchers for the University of Notre Dame's Cushwa Center project on "Gender, Sex, and Power: Towards a History of Clergy Sex Abuse in the U.S. Catholic Church." She has written two books about spiritual and sexual abuse in the Catholic Church, both published in German. "She has been at the forefront of the #NunsToo movement writing and speaking about the abuse of nuns," said the FutureChurch article about the award, "because 'I want no young sister to go through what I have gone through.' "

GSR: How would you define spiritual abuse?

Reisinger: I define spiritual abuse as a violation of a person's spiritual freedom, in terms of Gaudium et Spes: A violation of the "the most secret core and sanctuary" where a person "is alone with God, whose voice echoes in her depths." By its very definition, any act of faith must be free. If an act does not originate from the free will of a person, but simply from her of lack of alternatives, or worse, from manipulation, coercion or violence, it is quite plainly not an act of faith. For it to be an act of faith, it needs to be freely performed, in the first place.

By "free" I mean: The person performing it really wants it, knows what she is doing and could equally refrain from it, without having to fear any form of pressure or shaming. Unfortunately, this fundamental theological principle is not always respected, not even in religious orders. Instead, people, including men and women religious, are more or less subtly pressured or worked on to perform certain acts of faith. That is not only absurd, it is spiritual abuse. And it can have serious consequences, not only for the individuals that experience that kind of abuse, but also for the communities in which spiritual abuse is rampant — and for the church if she tolerates it.

What are classic signs of spiritual abuse? How would a person know?

A classic sign is the mixing of the outer (forum externum) and inner (forum internum) area. If the same person holds a leadership position in the external area and has spiritual authority over members of her community, this is a very red flag: Faced with a spiritual director who is at the same time her superior, a sister's inner freedom is seriously limited. Usually this goes hand in hand with the prescription of spiritual directors or confessors and the compulsion to regularly disclose your conscience to your superiors.

Other signs of spiritual abuse include an extremely emotional spiritual atmosphere or a kind of spiritual uniformity, in which many people seem to have exactly the same spiritual experiences and use literally the same phrases to describe them while people who do not have these same experiences appear to be deficient and are being shamed. Another alarming sign is the dependency that people develop when they undergo spiritual abuse: Under the influence of their abuser, they change radically and quickly and become completely dependent on him or her and the "spiritual stuff" they receive from this person. Whereas any sound and nourishing spirituality leads people to a greater inner freedom and stability, people who experience spiritual abuse become dependent, at times anxious and scrupulous, and sometimes this takes on even pathological forms.

Is it a gender issue? Age related? Describe please.

All kinds of people and religious communities are affected. However, my impression is that young women are especially vulnerable to spiritual abuse and often have particularly bad experiences, including forms of sexual violence that are linked to spiritual abuse. Just think of perpetrators like Frère Ephraim or Marie-Dominique Philippe who used spiritual manipulation to coerce young Sister into having sex with them. These are particularly devastating experiences.

What action is needed to address this issue and by whom?

In my view, there are at least two dimensions that need to be addressed. The one is a deeply rooted but harmful concept of religious life that tends to erase the individual person and her rights and stress almost exclusively self-sacrifice and mortification, often in a highly romanticized attitude. This is extremely dangerous and needs to stop, not only in the majority of religious orders, but also in official documents and everywhere in the church. The other, much more important level, is the level of canon law and binding norms. In theory, separation of forum externum and forum internum exists already. But in practice, many communities do not respect this separation, and in many cases the Congregation for Institutes of Consecrated Life and Societies of Apostolic Life does not intervene. The same is true for many cases of spiritual abuse, including severe cases that traumatize people and scar them for life. These cases hardly ever constitute offenses in terms of canon law or civil law and therefore hardly ever entail any sanctions. I think this needs to change. 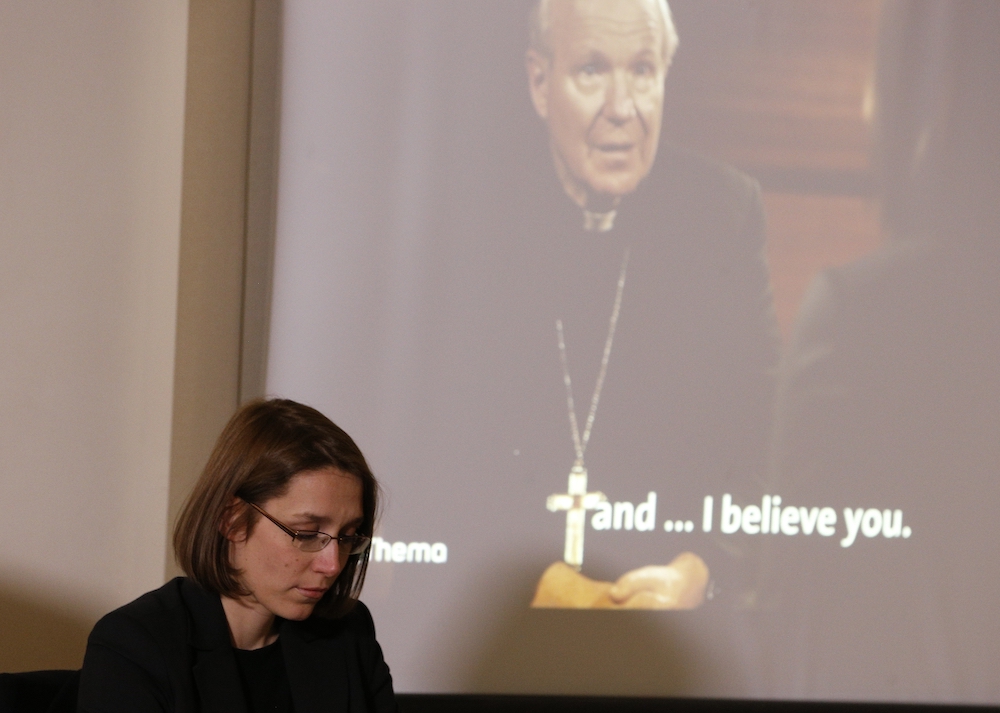 Doris Reisinger, an abuse survivor and former nun, is pictured as a video of her talking with Cardinal Christoph Schonborn of Vienna plays in the background during a news conference in Rome Feb. 19, 2019. (CNS/Paul Haring)

"When people lose their inner freedom to self-declared spiritual 'leaders' who manipulate them, the voice of God is silenced in their hearts."
—Doris Reisinger

What recourse would a sister have if it were a community member or a sister in authority? Who might even recognize it as abuse?

These cases of abuse do usually not constitute offenses and therefore are very hard to report effectively. In many cases, the best thing and the only thing to do is to leave the community. In less serious and isolated instances, a sister might successfully point out to her superior, that for instance superiors are "forbidden to induce the members in any way to make a manifestation of conscience to them" (Canon 630). However, in orders where these kinds of intrusions are normalized, she will probably not be successful.

What do you want people to know about this issue?

It is crucial to understand the seriousness of spiritual abuse. Spiritual abusers appear to be successful spiritual leaders because they manage to attract large numbers of young people in a short period of time, and they get them to endure all kinds of things, seemingly voluntarily. Therefore spiritual abusers have been celebrated and promoted in the Catholic Church for decades. Just think of people like Marcial Maciel. They have become the model that others now imitate. This harms the church deeply, not only because it harms many individuals, but because it endangers the very foundation of our faith. When people lose their inner freedom to self-declared spiritual "leaders" who manipulate them, the voice of God is silenced in their hearts.

Read this next: Bringing attention to exploited obedience, spiritual abuse in religious communities
This story appears in the Abuse of sisters feature series. View the full series.