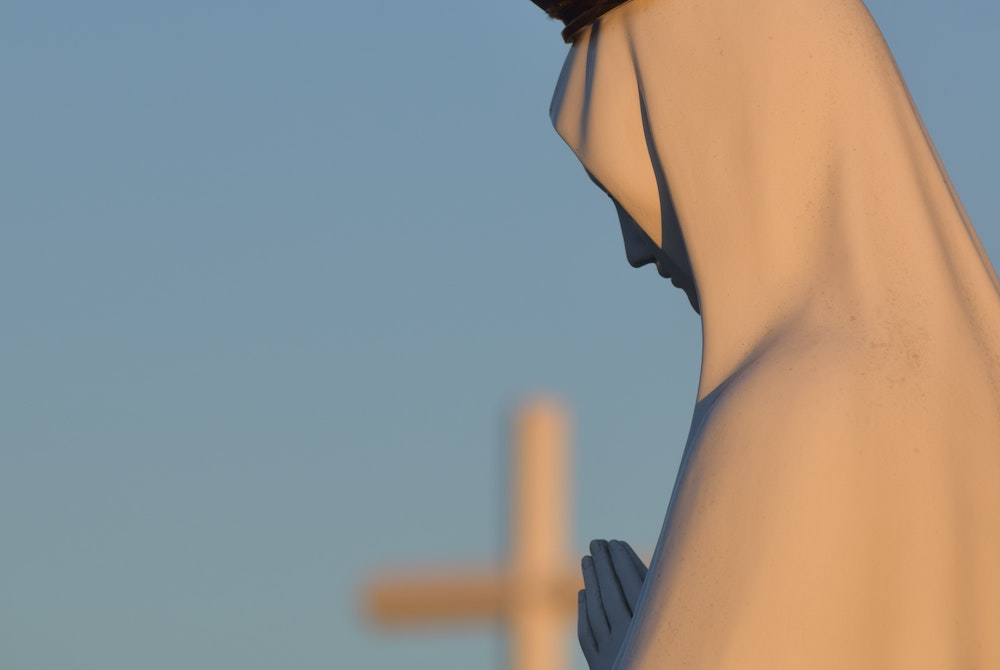 In conversations with other women, we've discussed how Mary the mother of Jesus is often used as a model for us, but in what we consider a caricature — as only mother, pure and chaste, asexual, dedicated to serving others and submissive, and leaving out her need for support, her independence, courage, questioning, strength and authority. Image: a statue of Mary at Our Lady of Fatima in Brazil (Unsplash/Mateus Campos Felipe)

There has been much written recently about rising incidents of abuse and violence against women, including an important meeting of the U.N. Commission on Women. Through conversations about this, I also learned of another kind of abuse: spiritual/religious abuse. Although the term was new to me, the stories from women who have experienced it are not new. It was — and is — experienced in the context of obedience to church leaders, church teachings and projected images of women that tend to shame them.

So, what is it? Spiritual/religious abuse is a dynamic of power and control where Scripture, religious prescriptions and/or spiritual language is used by someone in a position of authority or perceived authority, to manipulate others into specific behaviors or attitudes. The topic is getting more attention, including two webinars being sponsored by the Union of the European Conferences of Major Superiors.

GSR talks to Doris Reisinger, a former sister and clergy sex abuse survivor who has written two books about spiritual and sexual abuse in the Catholic Church. She teaches at Goethe University in Frankfurt, Germany and is a well-known philosopher, theologian and activist. Read the interview here.

An interview with one of the webinar presenters, Doris Reisinger, presented in a question-and-answer format, provides additional information. Reisinger is a former sister who experienced abuse from religious superiors and rape and assault by priests, so has first-hand experience of this horror. She is now a well-known philosopher, theologian and activist.

In conversations with other women, we've discussed how Mary the mother of Jesus is often used as a model for us, but in what we consider a caricature — as only mother, pure and chaste, asexual, dedicated to serving others and submissive, and leaving out her need for support, her independence, courage, questioning, strength and authority. Believing that the authority is describing Mary on behalf of God, women or girls can be convinced that if they do not cultivate this caricature of her in their lives, the consequence would be God's displeasure and even punishment.

Distorted images of Mary and God, and a consequent threat of suffering if not modeled, have potential to create fear and anxiety that can overwhelm the person's sense of autonomy and safety, eliciting lasting feelings of powerlessness, shame and inadequacy.  Unfortunately, feelings of threat do not register only emotionally, but bodily as well: tight stomach or limbs, racing heartbeat, headache, rashes and so on. The physical impact can be lasting for someone with a prolonged sense of being trapped and wanting to escape, but without knowing how. 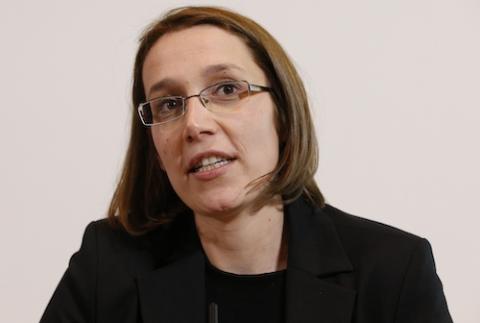 Doris Reisinger, an abuse survivor and former nun, speaks at a news conference in Rome Feb. 19, 2019. Click the photo to read an interview with her. (CNS/Paul Haring)

As I read more about this issue, I realized that spiritual abuse is probably more prevalent than I had thought, across nearly every religion.  Memories flooded my mind of my own relatives suffering from Church practices that engendered shame, such as having to marry a non-Catholic in the church sacristy rather than inside the church. Children also are often spiritually abused, even if unknowingly, by being told that they could go to hell for certain behaviors.

And as I reflected further, I realized there were many instances in my life where I felt coerced into behaviors that I did not believe in, related to religious practices before and after I entered the convent. As a sixth grader preparing for confirmation, for example, we were expected to pledge to be Pioneers, promising not to drink alcohol for the rest of our lives. I did not want to do it, but, did not know how to abstain and so went along with it, not intending to keep the promise. The pain for me was making a promise with no intention of keeping it. While alcoholism was an issue in the community, it wasn't in my family where alcohol often accompanied family celebrations — and after all, Jesus drank wine. However, neither this, nor other experiences caused me the lasting trauma that I heard from others. In my reading about spiritual abuse or trauma, I realized that the severity of impact depends on many factors, including the individual's sense of self and cultural upbringing. No two people respond the same to similar events or proclamations.

I was not raised in a strict Catholic home, nor did I ever attend a Catholic school, so I missed out on many "Catholic" practices and beliefs that I learned about later from others. Consequently, when I began my teaching profession I had some anxiety about teaching in a Catholic school, wondering what I might be expected to promote related to religious practices. I knew there were some things I could not teach, particularly when it came to submission expected of women. I had experienced too many times how women were judged and portrayed in the church, especially during my teen years. We were not to wear sleeveless blouses to church as that might cause temptation to the men present. There seemed to be many rules that programmed women's behaviors for submission. One that I questioned as a girl was why women had to cover their heads in church and men did not. Later, intensive study of the origins of veils led me to understand that the veil is in many cultures a symbol of submission. Consequently, this was one of my motivations for giving up the veil after Vatican II.

In my later ministry with adults, I realized the magnitude of spiritual abuse women have suffered from religious and spiritual expectations because of gender. Listening to their stories, I was often reminded of the novel Trinity by Leon Uris in which a woman confesses her unwillingness to submit to demands of her drunken husband. The priest promptly tells her that she must submit, because it was her duty as a wife, quoted from Ephesians 5:22-24. Even today, this passage is still read in church accompanied by homilies that perpetuate submission of women.

Patriarchal cultures, whether religious or secular, promote dominance/submission ideologies that can traumatize: belief in hell, purity culture, complementarity between sexes or distinct but separate gender roles, and beliefs about sexuality wherein men are assumed to be lustful by nature, and women's role is to avoid tempting them. Such beliefs when internalized can have a deep impact on women and even influence them to stay in abusive relationships, believing it is God who created these systems.

Patriarchal ideologies are found in religious life structures as well. A young woman I met recently told me that after eight years, she is still plagued with fear and guilt for deciding to leave the convent. As a new entrant she had been told that because she had entered believing it was God's will, leaving would only bring her unhappiness. She interpreted her lingering unhappiness of guilt and fear as punishment for disappointing God. Soon after leaving, she was sexually abused by a priest, which only exacerbated this belief and the trauma she already experienced.

Authority figures in religious life who internalize patriarchal systems of dominance and submission can deliberately or unconsciously exercise dominance through the vow of obedience. Traditional terminology of "superiors and subjects," or "mothers and daughters," perpetuates this system of power in which the implicit response to advice or command by an authority is expected to be unquestioned.

I have heard many stories of this internalization in my global travels, particularly related to mission assignments. A sister suddenly receives a letter or message from the leader that she is reassigned. Without any prior dialog or stated reasons by that leader, her expected response is, "God has spoken."

Those of us who entered convents before Vatican II are very familiar with this system. In my congregation, a communal list of annual assignments would be posted in early August, and in a day or two we were sent out. There was no thought of questioning, if one were truly obedient. This changed in the 1970s as personal and communal discernment gradually became part of our practice.

Vatican II shifted this interpretation of obedience dramatically. A recent document, "New Wine in New Wineskins" from the Congregation for Institutes of Consecrated Life and Societies of Apostolic Life, makes this new interpretation clear: "It must be kept in mind that true obedience always puts obedience to God first, before authority and the person who obeys. … true obedience … requires that each individual demonstrates his or her own conviction obtained through discernment, even when this conviction does not coincide with what is being asked by a superior. Then, if a brother or sister obeys at his or her own will in the name of communion, charitable obedience is put into practice."

Obedience must be a free choice or it is not obedience.

It goes on, quoting Perfectae Caritas: " 'Superiors are to exercise their power in the spirit of service […] govern their subjects as sons and daughters of God, and promoting the voluntary obedience with reverence for the human person. …' "

Although not easy for leaders to balance the good of the institution and that of individual members, it does require taking care to consider the needs of both, through mutual dialogue and genuine discernment. 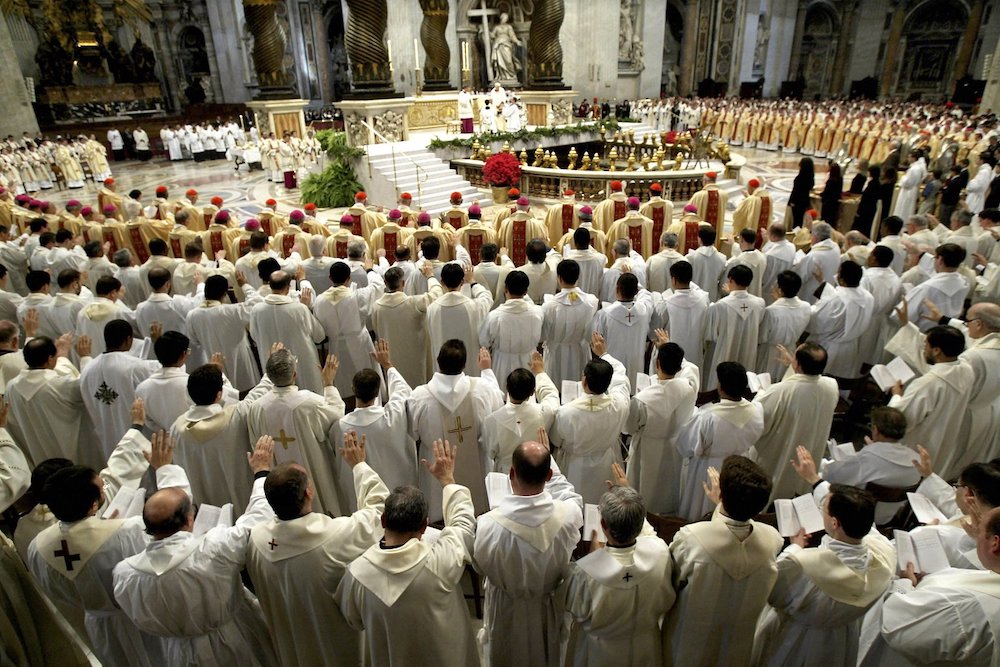 Priests surround Pope John Paul II during the Holy Thursday chrism Mass at the Vatican April 8, 2004. During the Mass, the pope and clergy renewed their vows as priests. (CNS/Reuters)

As noted above, elected authorities in congregations wield positional power vested by the community to serve — not to have power over the members. However, it is not uncommon that a leader will employ personal or congregational spirituality tenants to coerce compliance for specific behaviors. Thus, frequent meditating and reflecting on one's images and use of power can be helpful in preventing spiritual abuse or even violence to others.

Although religious leaders have positional power, authorities are not the only ones who wield power; members do as well. Personal power combined with personal spirituality or interpretations of congregational charism /spirituality can also be used negatively to manipulate or intimidate others in ministry or congregational life.

Jesus is the model for the use of power for everyone. He says to the disciples in Matthew 20:25-26, "You know that among the gentiles the rulers lord it over them, and great men make their authority felt. Among you this is not to happen. No; anyone who wants to become great among you must be your servant ..." (New Jerusalem Bible.)

Later, St. Peter says: "Be the shepherds of the flock of God that is entrusted to you: watch over it, not simply as a duty but gladly, because God wants it. ... Never be a dictator over any group that is put in your charge, but be an example that the whole flock can follow" (1 Peter 5:2-3).

This is straightforward, leaving no room for spiritual manipulation of any kind.

This story appears in the Abuse of sisters feature series. View the full series.