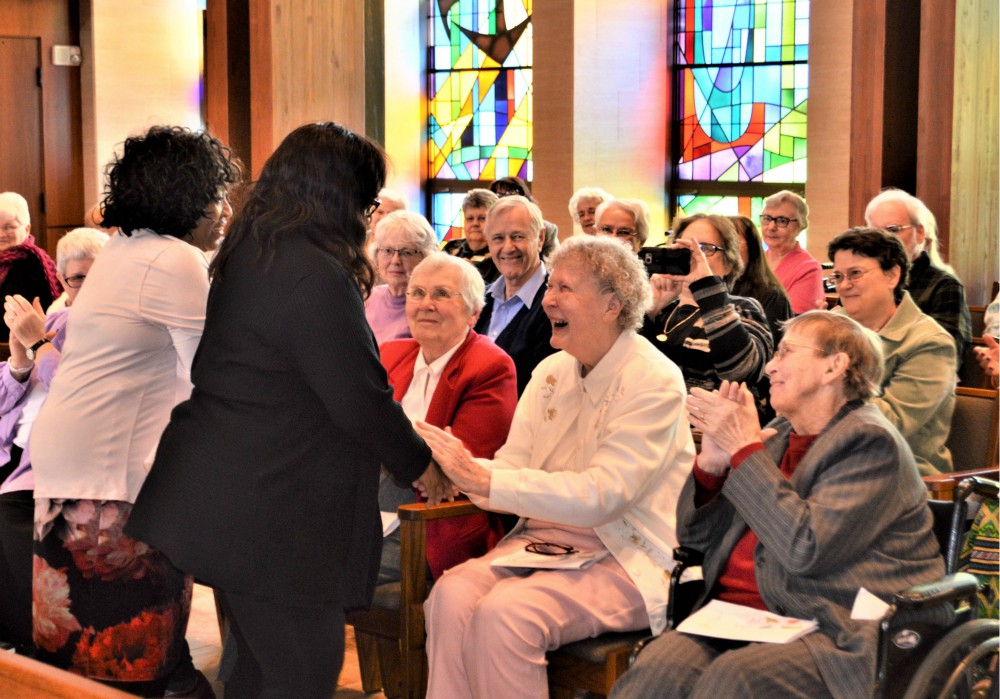 Editor's note: Yesterday, June 14, was the birthday of Harriet Beecher Stowe, one of the overlooked women authors described in this column. Among other things, she wrote Uncle Tom's Cabin, which contributed so much to popular feeling against slavery that it is cited among the causes of the American Civil War.

We have a "giveaway" table in our monastery. It's where a sister can unload an item she no longer needs or wants. If another sister doesn't claim it in a day or two, it gets packed up for donation to a good cause or dropped in the dumpster.

A few weeks ago, I glanced at the table and spotted a book I didn't need called How to Read a Book. Intrigued, I carried it off to my reading corner. The exclusively male language used for all humans was jarring, and often that is enough to make me put even a good book down. The original publication date of this one was 1940, so I practiced some leniency. But as I read, I mentally changed the language to include women as human, too. This practice, by the way, was not included as a suggestion of "how to read a book."

At the end was a 13-page "Recommended Reading List" of 137 authors that would be "worth my while to read." I congratulated myself on having read works by some of those listed. Plato, Augustine, Kant, Dickens, Sartre ...

And then it hit me. None of the writers were women. I reviewed it again, more carefully, and I found one — Jane Austen. On a book list with works written from 900 B.C. through 1940 — that's almost 30 centuries, nearly 3,000 years — the publishers found only one female author worthy of inclusion.

Then a flash of realization connected this to another issue I've been pondering.

Recently, we began work on the 2021 celebration, taking time to discuss our understanding of the purpose of Catholic Sisters Week. To be effective and relevant, I need to know the why behind the what. The task force, consisting of three women religious and four laypersons (two women and two men), spent the better part of our meeting discussing the purpose of a week that is popularly billed as a time to "thank and honor" Catholic sisters.

The inaugural 2014 celebration was situated in Women's History Month and began on March 8, International Women's Day. The intent was to honor specific historical contributions of Catholic sisters in founding schools, hospitals, social service agencies and more.

That is a noble intent; recognition and gratitude are essential to the art of being human. But it's also safe. It easily lets unprecedented historical accomplishment become the stuff of legend rather than a challenge to continue such work in our day.

A sister on the committee spoke against the stereotypical honoring of "quaint little old nuns," which is one of the traps given the current median age of women religious. It makes the women who, against incredible odds, built schools and hospitals on the American frontier seem like another entity altogether. Or those who made Vatican II renewal a reality, or marched in Selma, or moved out of convents into the lives of the poor and disenfranchised. Chapter read and book closed. That was then. This is now.

We discussed broadening the focus beyond thanks and honor for past accomplishments to highlight the traditions and charisms of communities and how they are lived today and embraced by large numbers of lay associates and oblates and agrégées. Another committee member pointed out that most people still don't know the important role of sisters in our country's history, let alone know what the charisms are.

How do we share a message about sisters when fewer and fewer people have personal contact with sisters and young people only know them through old movies or tasteless social media posts? Around and around we went, finally settling on a purpose of celebrating traditions that continue to change the world.

Now back to the list of recommended books written over a span of 3,000 years that only included one book written by a woman. You can't tell me that women had nothing to contribute to a meaningful life from 900 B.C. to 1940, that they didn't think or weren't filled with creative insight and natural curiosity. That they, too, didn't help advance the evolution of human consciousness.

That list helped me realize we need to do much more than celebrate the historical contributions of women religious. Much more, even, than broaden the focus of how we see their traditions expressed today. We need to rewrite history where women's achievements are the norm, not the exception. We need to promote nonplacating recognition and full-on acceptance — if not reparation.

It is an amazing history. Until the 1960s, women religious were kept at a distance or still symbolically locked in the cloister where men put them in the early centuries of the church because women dared to take control of their own lives. They were a disembodied reality, hidden head to toe under medieval robes that created an image of otherworldly, asexual being. They were often simply "Sister" with no individual identity. When they were included in diocesan or parish histories, they were often pictured in nameless large group photos while their male counterparts were identified by name with individual portraits. Yet they created history with their remarkable accomplishments, and that often unrecorded and seldom recognized history is a legacy that continues to benefit church and society.

We are the fruit of their courageous and unstoppable mission to follow Jesus. Can we even estimate the number of children whom sisters educated who then educated and influenced others who influenced others? Even though the Catholic school system has passed its prime, we continue to reap the seeds sown over generations.

Adults who flock to spirituality centers and programs, many run by sisters and their associates, who volunteer in soup kitchens and work for nonprofit agencies to benefit the poor, millennials who are on the front lines for justice for immigrants, for the Earth, for women and for peace — I wonder how many of them can trace the pull in their hearts to the influence or witness, direct or otherwise, of a Catholic sister. This is what we celebrate now.

If our focus is too narrow or too romanticized, we run the risk of rendering sisters today benign and silent. We negate their prophetic action throughout history even while their voices were silenced. We risk writing them off as historical artifacts or "little old nuns."

The message they continue to faithfully live and share with the laity whom they empowered following the mandate of Vatican II continues to speak, like Jesus, for justice, for the poor, for the Earth and for women, even when pulpits are silent.

We must be suspect of any list that omits women. The gifts of women, intellectual, creative, scientific, political and spiritual, are needed now more than ever. The difference is that now we know it because history has proven it. And, we can choose to do something about it.