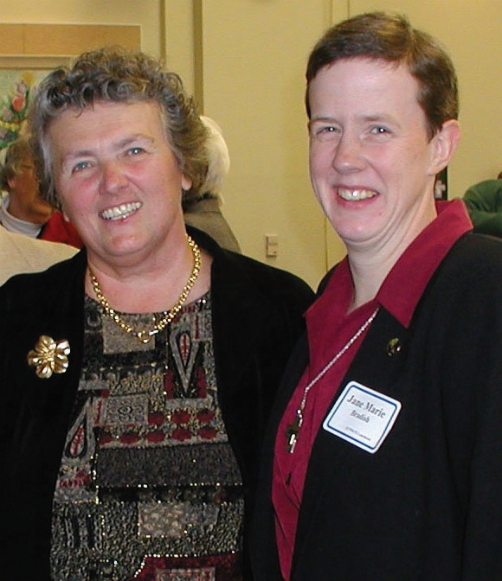 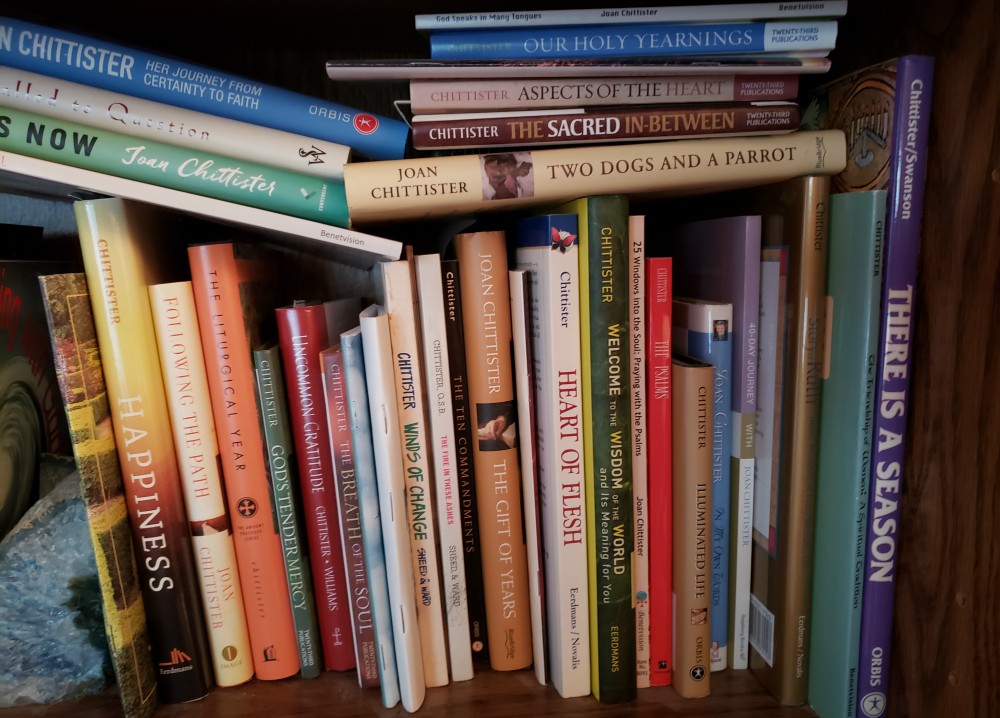 My bookshelf with books by and about Benedictine Sr. Joan Chittister (Jane Marie Bradish)

When I became a novice in 1987, I found among my welcome messages and holy cards a book titled Winds of Change: Women Challenge the Church by Benedictine Sr. Joan Chittister. My community has always been progressive, so I wasn't startled by the book, but I was intrigued. I had not read any of Chittister's work; I hadn't even heard of her. Little did I know where that small book would lead.

In April 2001 Chittister was one of the main speakers at the National Catholic Education Association convention in Milwaukee. The conference was surrounded by controversy as various bishops and dioceses across the country had either forbidden their teachers to attend or had withheld funding and credit for their teachers. The Milwaukee Archdiocese (my home diocese where I was teaching) welcomed her and encouraged all the teachers to attend.

I wanted to know why some bishops were so upset, so I was determined to attend the Chittister session. Sisters from various congregations filled the chairs closest to the stage as a show of support. Of all the speakers we heard, I connected the most with Chittister: She challenged us as educators to be spiritual leaders for our students and to empower them to become spiritual leaders as well.

I proudly wore the "I support Joan Chittister" button that various groups were distributing. At the convention I picked up another of her books. One book would lead to the next and the next and the next over the years. The books I started with were easy reads for me, they spoke of real-life experiences to which I could relate. 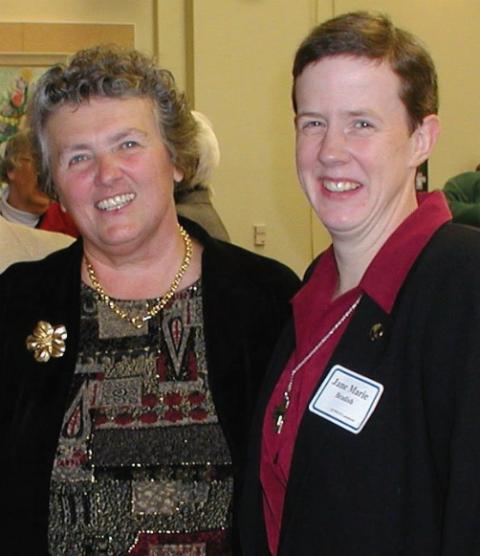 Milwaukee is home to many religious communities and hosted the national convention for Call to Action for many years. When word came that Chittister would be the keynote speaker in November 2006, the wheels started turning.

Catholic sisters and nuns had once again been under the microscope, the Vatican visitation would be a few short years later, so I suggested to the leadership team of my province that an invitation be extended to Chittister. A lunch, a reception, something, to offer thanks and support for all the work she had done for so many — especially the sisters — over so many years.

I heard nothing until a week or so before the convention. Then a call came: I was asked to meet Chittister at her hotel and bring her to our motherhouse for lunch. "Stunned" would be the best way to describe my reaction.

The luncheon was primarily for the leadership teams of regional Leadership Conference of Women Religious communities; I sat in the back corner of the room. She mingled before lunch and spoke briefly to the group, appreciative to have a chance to gather with the local leaders.

When it came time to leave, she thanked them for the "great idea" of gathering; it was at that point she found out the young sister-driver in the back corner was behind the effort.

The ride to the luncheon had been mostly context-setting: where we were going, who would be there, and Milwaukee trivia. The ride back to the hotel was much more personal. Joan was genuinely interested in me, the one bold enough to ask for the "locals" to show her their support. She wanted to know what I was passionate about, what I was involved in, how did I come to know about her — everything.

There I was, the local kid, having an engaging and mutual conversation with an international leader and author. Before she left the car, I had her business card and a request to share my recently completed thesis.

When we saw each other later in the weekend at the convention, she not only recognized me, she remembered my name. Little did I know our paths would cross again.

In 2009, I heard Joan speak again. It was my first venture back into the world after my mom died. She knew by looking at me something was wrong, and her sympathy and support were touching. In a room full of people, she managed to have short but personal conversations with so many.

In 2010 and 2015, Joan was back in Milwaukee addressing Call to Action again. When another invitation was sent to her to have lunch with the sisters (yes, I instigated that again!) she contacted me to make sure "her driver" would be available. 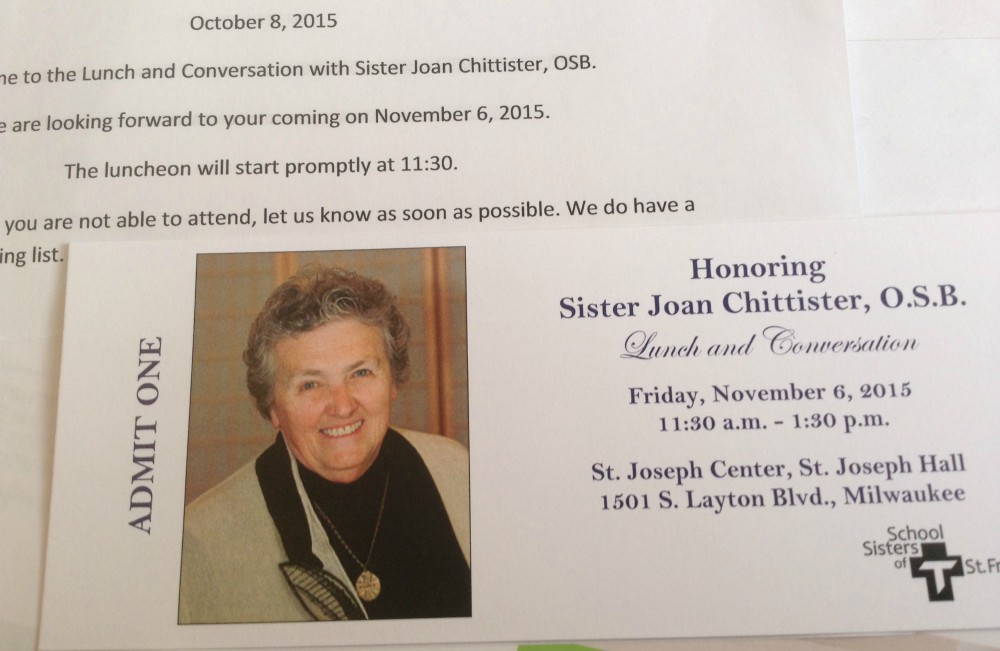 Ticket to the luncheon with Sr. Joan Chittister in Milwaukee in November 2015 (Provided photo)

In between those face-to-face encounters over so many years, there is the occasional "just checking in" email.

So, who cares? I'm sure many people have encountered Joan. A quick internet search or reading Tom Roberts' biography of Joan will give you all kinds of information about her.

I care! There was no vested interest on Joan's part; neither of us knew we would ever see each other again. She's a well-respected international leader and I'm a local with minimal experience outside of my hometown. Yet Joan, among others, helps me find my voice and a broader and more global perspective. And as I age, I know how vitally important it is to let people know that they've helped me grow.

Joan's books, our in-person encounters and those occasional emails continuously challenge me to look at the world with a critical eye instead of simply getting caught up in the day-to-day-ness of life and ministry. I learned how to ask BIG questions and not accept standard or simple answers.

When I moved from teaching mathematics to theology, I insisted we clean up the God language: God would not be male (or female) in my classroom. When teaching morality, I made sure each and every "hot topic" was explored from all possible angles, so "right to life" meant total care from womb to tomb, not only anti-abortion. 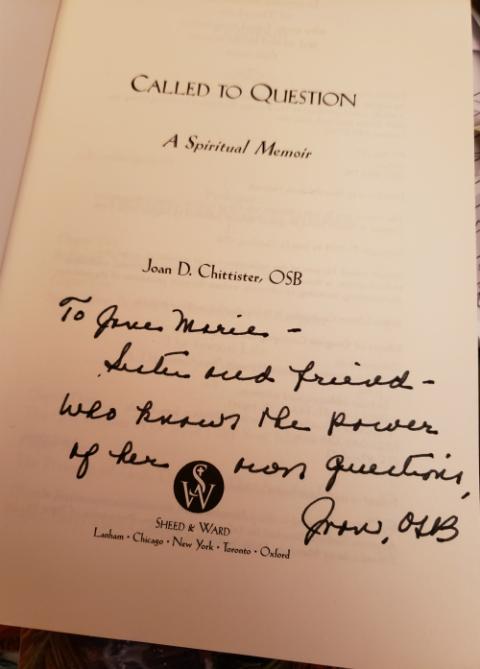 When all-school prayer experiences expanded to include more than eucharistic liturgy, I pushed for the girls and female staff to take leadership roles. None of those may sound like a big deal, but they were pretty bold steps for me.

I've learned I don't have to be out leading or participating in protests to call people's attention to issues that need it. I can be going about my daily life and at the same time raising awareness for not only myself but those I encounter. And I've learned when and how to lead and participate in protests when other options have been exhausted.

Those are the lessons I'm trying to pass on. I hope I've risen to Joan's challenge of calling forth the next generation of spiritual leaders.

When I sent her a draft of this column to be sure it met with her approval, she let me know we were on the same wavelength by commenting "In fact, this article would be a great companion to the new book, The Time Is Now: A Call to Uncommon Courage. This book breathes what you discovered. Prophecy is about 'showing up.' Where you are and in what you do. It's not about screaming; it's all about the little changes, the honest conversations, the support we bring to the big movements, the spiritual revolution that we start on the one square foot of land on which we each stand."

And while I have no inside information, I'd bet money that Joan will continue to call everyone — those who listen and those who try so hard not to listen — to step out of their comfort zone and become the spiritual leaders they are meant to be.