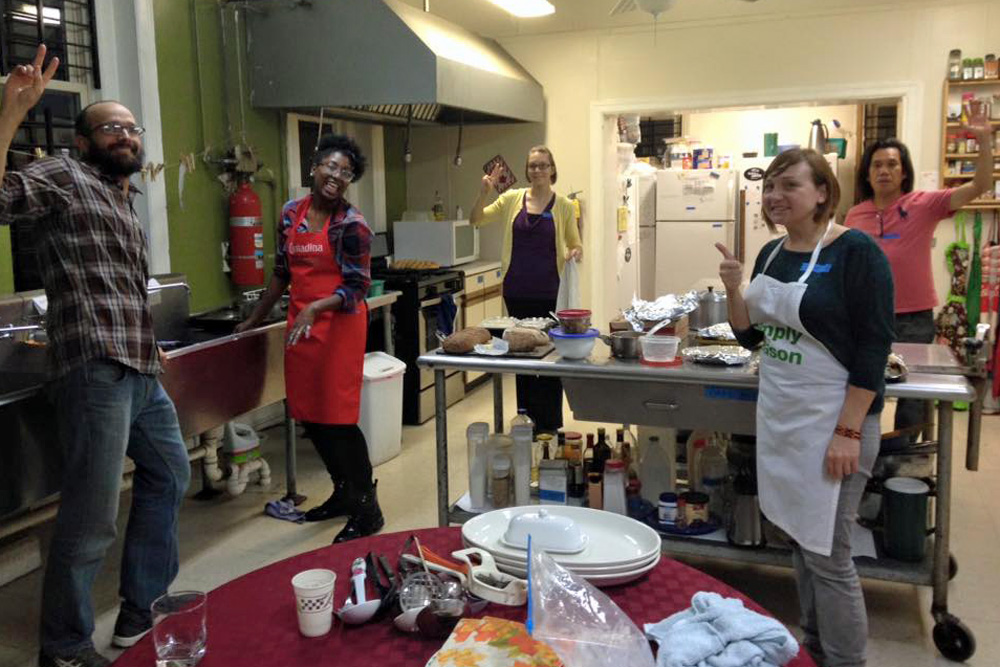 When I visit my family, we often watch Chip and Joanna Gaines transform Texas homes on their Home and Garden Television show. Joanna always decorates the homes according to the customers' wishes and tastes. However, with each beautifully reconstructed home, Joanna leaves her signature plaque, which features a quote often attributed to Mahatma Gandhi: "Be the change."

Reservoir Hill House of Peace, or RHHP, a mansion built in 1914, is located just a few blocks from where the 2015 Baltimore riots occurred. The Mennonites used the mansion for various purposes, and in response to the need to care for refugees in the United States, opened their home to their first refugee guests in 2003. The Mennonites also saw the need to create the Asylum Seekers Housing Network, which has served more than 80 refugees and asylum seekers since 2003.

During this past spring, the mansion housed a community of 12 who desire to "be the change" and learn from each other by sharing cultural practices and international foods, while embracing the beauty of our different backgrounds (Germany, Sri Lanka, South Korea, Togo, the Philippines, the United States and Uganda). We are committed to creating a Christian, peace-centered presence in the city of Baltimore, especially since Baltimore was identified in 2019 among the nation's most dangerous cities.

The Reservoir Hill House of Peace community ministers in various parts of the city: two residents, members of the global Brethren Voluntary Service, minister at Project PLASE or (People Lacking Ample Shelter and Employment) —a shelter in West Baltimore for the most vulnerable people without a home. Four members of the RHHP community are in the process of seeking asylum status and attending classes and activities at Asylee Women Enterprise, or AWE. One resident studied at a neighboring university and the remaining five, including myself, minister to the people of Baltimore through various other ministries/jobs.

As a community, we live the mission of Reservoir Hill House of Peace by playing a vital role in the hospitality and friendship shown in the North Baltimore Mennonite community. And the RHHP mission?

The RHHP mission is to provide a community rooted in Christian values where persons of diverse cultures and faiths learn from each other and engage with the surrounding neighborhood, providing shelter and social support in a welcoming community to asylum-seekers. 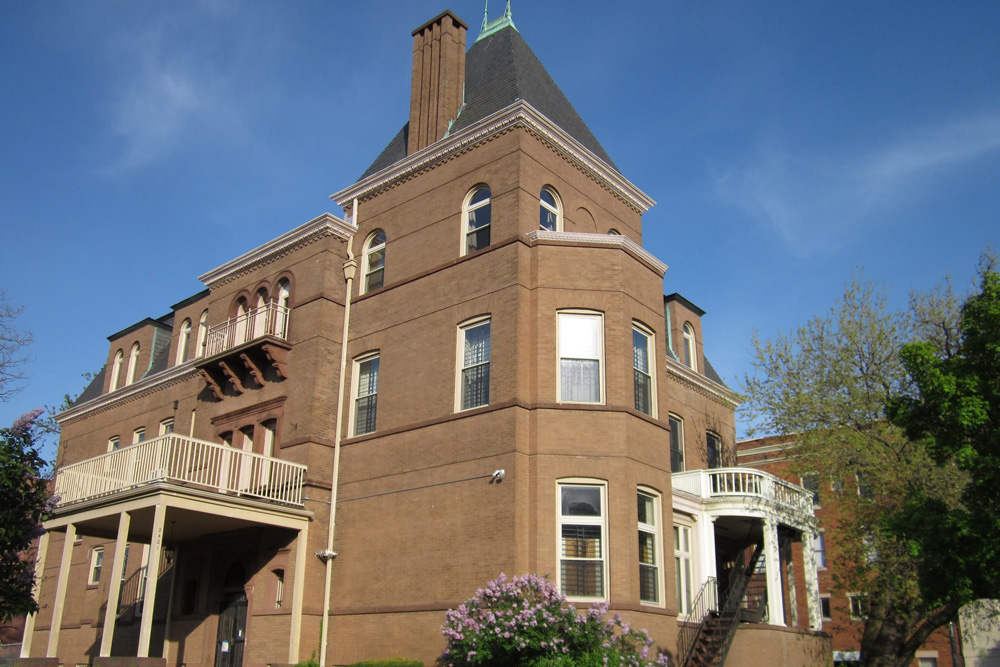 We give life to our mission through our five core values: service, simple living, peace and reconciliation, cultural exchange and spirituality. We strive to serve each other with love. Evident in the day-to-day living at Reservoir Hill House of Peace, we also work to serve our neighborhood and Baltimore City. Our acts of service may seem small, but we know they have a positive and lasting impact. We embrace efforts to live more simply and sustainably. We seek opportunities to share resources; consume wisely; grow some of our own food; walk, bike, or take public transit; compost, recycle, conserve energy and take time to read a good book (adapted from RHHP Handbook).

Two early childhood experiences deeply influenced my own spirituality and life choices when I was six years old, a time when the imagination is highly active. I watched in horror the construction of the Berlin Wall. The second was while reading the Maryknoll magazine, when I was about nine years old. As I carefully studied the joyful faces pictured there, I felt moved to join the Maryknoll congregation.

Those two experiences seemed to root in me a passion to serve others and set me on a quest to help those in need. The desire and attraction to serve a diverse people grew with intensity, and continually leaves me wondering about life choices, spirituality and humanity. And so I wonder: does a person naturally identify with another group of peoples — complete strangers from somewhere around the globe, or does one naturally identify with their own — their tribe?

How does one find such a place where "be the change" becomes a daily conscious choice? Why do some allow themselves to be culturally stretched, rather than seeking comfort in their own culture? Could this possibly be a template for religious life in the future? Where does seeking such a life begin — is it nature or nurture? Do the positive effects of tribalism help people make such choices? These questions rise within me as we create community together at Reservoir Hill House of Peace. 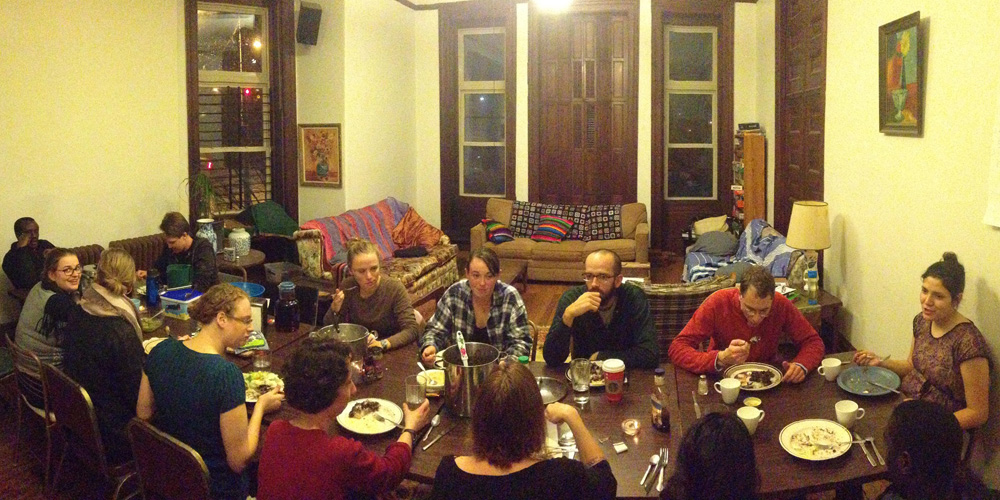 These questions also led me to explore the concept of tribalism and how understanding it might help us stretch beyond the comfort zones of our own social groups. Does tribalism play a role in stretching beyond our comfort zone, or does it just keep us as a member of the tribe?

The question above resurfaced while listening to a Canadian talk show, The Agenda with Steve Paikin. This particular show, entitled "The Psychology of Tribalism," stirred even more questions and helped me to expand my understanding of tribalism beyond its typical connection with politics.

The interviewer, Steve Paikin, asked David Berreby, one of the panelists and author of Us and Them, about a fascinating 1950s experiment with some 40 10- and 11-year-old boys split into two groups at a "fake" summer camp in Robbers Cave State Park in Oklahoma. After listening to the details of the Robbers Cave experiment, one can understand how the social psychologist, Muzafer Sherif, developed the realistic conflict theory with which many of today's theorists agree. Berreby explained that the experiment showed that the negative effects of tribalism can be undone when there is less competition and all members benefit by together working toward a common good. In a world where political tribalism penetrates today's conversations and culture, many choices polarize us, such as our political party and viewing our television options. The upside of tribalism, belonging and caring, speaks to those who seek to broaden their experiences by living/working with and learning from a diverse people while seeking the common good, as the residents of Reservoir Hill House of Peace strive to live community each day.

That desire to live and work with people of a variety of cultures once again rose up within me, when an invitation arrived in my email from the director of Asylee Women Enterprise and the North Baltimore Mennonite Church. This invitation became a gift for my sister and me as we eventually became co-coordinators at Reservoir Hill House of Peace.

Since moving into Reservoir Hill House of Peace and walking with both those seeking asylum and those serving Baltimore, it is no wonder that Gandhi's purported words place together all the puzzle pieces of life's experiences, forming a remarkable international picture of Christian community in the middle of such a violent city. We spend our time together "Being the change we wish to see" as we stand witnessing God's reconciling love to the people of Baltimore.

The future of religious life remains a question, but with strong evidence that this way of life can be a path for people to experience Christian community and "be the change." It is in this sacred place where the world meets.

[Helene Cooke, a member of the Sisters, Servants of the Immaculate Heart of Mary in Scranton, Pennsylvania, is the counselor at Mother Seton Academy, a Baltimore Nativity Miguel School. She and her biological sister currently minister to immigrants, volunteers and people desiring to live intentional community as they together create an intercultural community at Reservoir Hill House of Peace in Baltimore.]