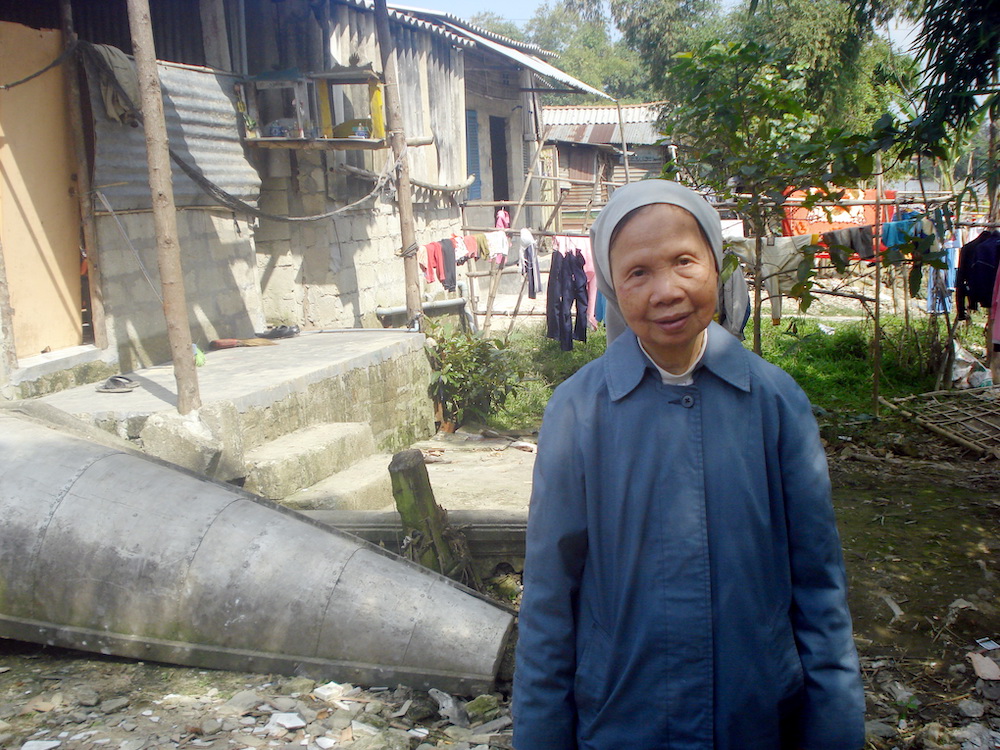 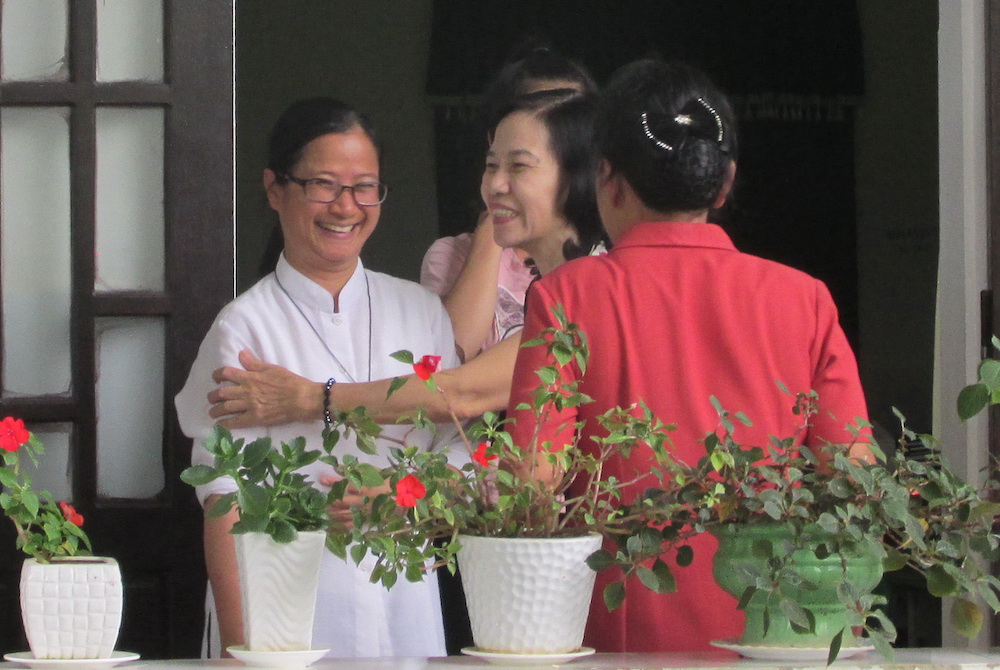 Daughters of Mary of the Immaculate Conception Sr. Joanna Tra Thi Quanh welcomes Catholic women to a celebration marking Mother's Day at her congregation in Hue City on May 10. (Peter Nguyen)

Thua Thien Hue Province with the ancient city of Hue, the former capital of Vietnam, is predominantly home to Buddhism in addition to other religions.

But Catholic sisters who work in the province and elsewhere inspire followers of other faiths to be interested in Catholic religious life through the example of their pastoral care and services.

In the last five years, 11 women from other faiths embraced Catholicism and joined four local congregations — the Sisters of St. Paul de Chartres, Daughters of Our Lady of the Visitation, Daughters of Mary of the Immaculate Conception, and Lovers of the Holy Cross — according to Hue Archdiocese statistics.

Catholicism is seen as a foreign religion in Vietnam, with 52,000 followers among the population of 1.3 million in Thua Thien Hue province, according to church statistics. There are about 7 million Catholics in Vietnam, which has a population of about 98 million.*

Three sisters who have their origins in other religions recently talked with Global Sisters Report about their admiration for what sisters have done for them and others, inspiring the women to convert to Catholicism, pursue religious vocations and commit to people in need.

Sr. Joanna Tra Thi Quanh, 41, is a member of the Daughters of Mary of the Immaculate Conception and its Committee for Charity.

I have one brother and one sister, and we are from a Cham ethnic family [of Malay-Polynesian origins] based in Ninh Thuan Province. My family originally embraced Brahmanism, or Hinduism, which is a dominant religion among local Cham communities.

When I was a child, I had poor health and ailments. My mother asked local shamans to heal me, but my health did not improve.

In 1995, I was sent to study at a high school in Ho Chi Minh City and lived at my oldest sister's home. I was impressed at the way two sisters from the Bethany community of the Daughters of Mary of the Immaculate, 2 kilometers away from our rented house, visited us and offered free scholarships to my nieces and me. In return, we also attended Christmas and other feasts at the community as a way to show our gratitude to the nuns.

I was happy to be admitted into the nuns' hostel in May 1996 after my eldest sister was unemployed and unable to continue supporting me.

Since then, I was interested in the new religion, learned how to pray from the nuns and, consequently, my ailments disappeared. Seeing my improvements, blissfully, my family allowed me to embrace Catholicism and follow the nuns.

I had completed a catechism course before being baptized on Dec. 6 that year.

Hearing of my conversion, many of my relatives were shocked and kept themselves far away from me. When I returned to my village that summer, local shamans dropped my name out of the village list and threatened not to hold rites for my family members' funeral anniversaries or our harvests.

I entered a university in Hue City in 1997 and joined the congregation's motherhouse based in the city.

On Dec. 8, 2000, I took my first vows at a solemn ceremony that my mother and siblings attended.

After that, I spent one month visiting my home and relatives, who were old and in poor health. I told them God creates the sun, the moon, the earth, all plants and animals, and humans. I told my aunt's family about God's love and his good relations with people through the parable of the lost son, about sins from evils, and especially, it is God, not shamans, who cures me of my ailments.

At the same time, a Franciscan sister was paying regular visits to poor Cham families, and offering them money to erect houses and cover their children's school fees.

In 2008, my parents and aunt's family with four members joined the religion. Months later, my mother informed me that many of her relatives also converted to her new religion. [Cham people's activities are organized by a matriarchal system, so women have authority and power in their families.]

I worked with ethnic groups in Gia Lai Province from 2005 to 2015, when I was assigned to serve people in the mountainous district of A Luoi in Thua Thien Hue Province.

Other sisters and I quietly visit farmers in need, especially Pako and Van Kieu ethnic groups, and share food, clothes and scholarships with them when they suffer illnesses, lose crops or are hit by natural disasters.

Loving and serving other people, especially disadvantaged groups, is the core of our religion.

I am happy that we have some 250 Cham Catholics, including 15 nuns and five men following the priesthood.  Most of them are from provinces of Ninh Thuan and Binh Thuan. 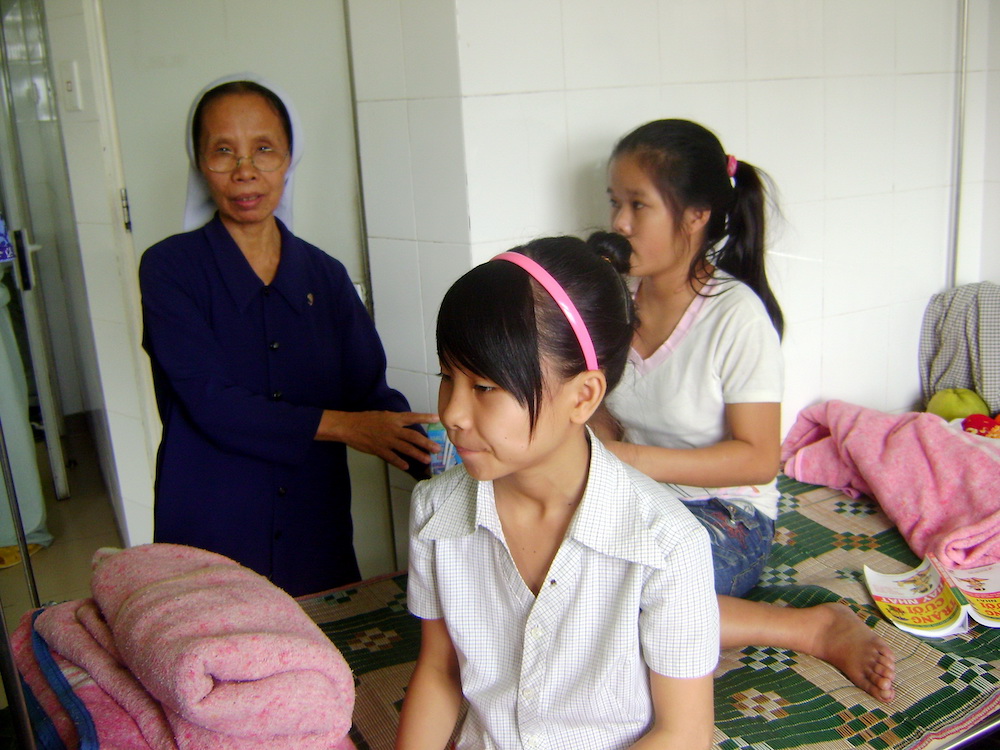 Sr. Lucia Nguyen Thi Nong, 64, a Daughter of Our Lady of the Visitation, is based in the Luong Van community at Phu Vang District.

I am from a Buddhist family with five members in Huong Tra District. After my father was killed by communist guerrillas in 1967, my family and many local people ran 15 kilometers [about 9 miles] to Hue City and we stayed at our relatives' house.

We decided to convert to Catholicism after we were given free food and education by the Daughters of Our Lady of the Visitation sisters. A Catholic benefactor helped us to buy a house, where my family has lived until now.

On May 31, 1974, I attended celebrations to mark the 50th anniversary of the congregation's establishment. I was inspired by the sisters' consecrated life and decided to follow them. I took my first vows in 1977 and the final vows three years later.

Three sisters and I were assigned to the convent in Kim Doi, the cradle of the congregation. We repaired the building, which was ruined in the [Vietnam] War, cultivated crops and raised poultry for a living. We held catechism courses for catechumen and offered pastoral care to some 200 Catholics who lived among 10,000 people, many of them following Buddhism, Confucianism and Taoism.

Now I serve as head of the community with four sisters in Phu Vang district. We look after 40 children under age 6 from local families, and 10 pregnant women who were abandoned by their boyfriends. We also do some pastoral work at the local parish.

I am happy to be a Catholic nun and bring God's love to poor people.

I was born in a Buddhist family in Hue City. My parents had two sons and me, their only daughter.

Finding my musical talent, in 1957 my parents sent me to study at a school run by De La Salle Brothers after I had finished at another school run by St. Paul de Chartres sisters. I had opportunities to learn basic catechism and attend Eucharistic adoration. I had many close friends who were Catholics. We played musical instruments, sang hymns and danced to celebrate Christmas. In my dreams, Jesus and poor people visited me.

Three years later, when I was 16, I decided to follow Catholicism and my parents were in complete agreement with me. I wished to serve people in need, so I joined the St. Paul de Chartres sisters based in Da Nang City in 1963 and took my first vows in 1969 and final vows five years later.

I have served marginalized people since 1973. I offer food, clothes and other basic supplies to ethnic patients at local hospitals, elderly people without relatives, and children from families who live on boats in rivers.

We hold courses in basic education for 200 illiterate children who sell newspapers, polish shoes and collect used items for a living. Some also collect algae and catch fish in rivers to make money.

Many children are given vocational skills — repairing motorbikes, making shop windows and embroidering.

Thirty people now work for themselves and nine out of them embrace Catholicism.

I felt special love from God when my parents converted to my religion in 1984. In my experience, we should respond positively to God's call and then He will care for you and your families.

*Editor's note: These statistics have been clarified.