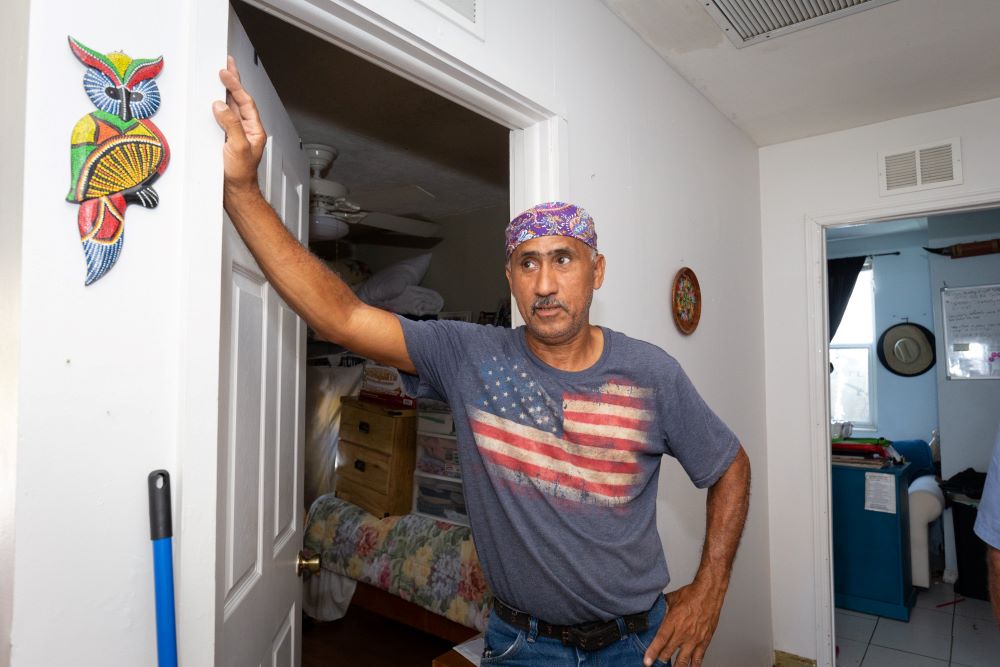 Luis Reyes, an employee of Catholic Charities of the Diocese of Venice, inspects damage to his home in Fort Meyers, Fla., Oct 5, after Hurricane Ian brought at least 3 inches of rain into the residence Sept. 28. A fallen tree pulled down the power line from his home. (CNS/Tom Tracy)

I lived through Hurricane Ian! I live in southwest Florida, but inland from Fort Myers, in Immokalee, the unincorporated agricultural and immigrant community that lies about 25 miles from where the storm surge stopped. We received over 6 inches of rain, and pounding wind knocked down trees and electric wires and tore roofs off trailers. Most the town was without electricity for two or more days.

Sitting in a house in the dark with windows boarded, the wind howling and rain battering the structure, there was nothing much to do. I read, worked on jigsaw puzzles and ate peanut butter sandwiches by flashlight. I had lived through the 2010 Haiti earthquake, so although this was frightening, still I felt quite secure in the cocoon that was my small four-room house.

Before the hurricane hit and for those days afterwards until electricity was restored, I had lots of time for reflection. The hurricane came ashore on Wednesday. Southwest Florida was told to prepare starting the previous Friday. I went to the beach! It was a beautiful day with no signs of the devastation to follow.

When I got home and listened to the nightly news, I saw lines of vehicles waiting to fill their gas tanks. By the end of the weekend, stores were running out of food, water and other supplies, even though the eye of the storm was anticipated to come ashore north of us in Tampa. I decided to fill my gas tank on Monday. My landlord boarded up my windows. 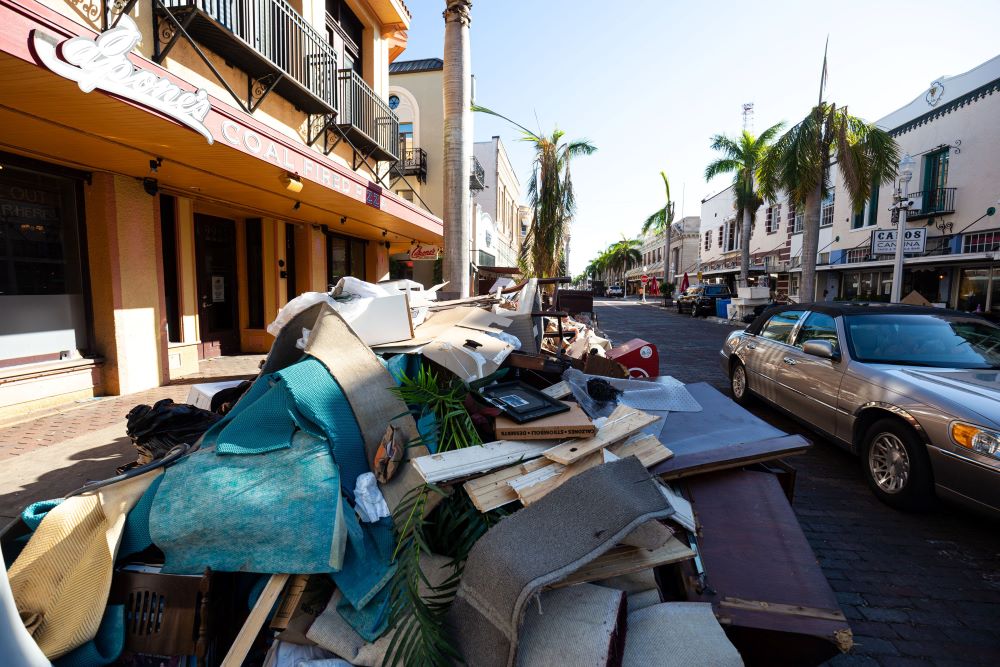 I thought about the "invisible people" being affected by this natural disaster because I live surrounded by invisible people. They are everywhere where there is poverty and limited options. The people in Immokalee, and people living in poverty all over Southwest Florida, were not able to top off their gas tanks. They were not able to purchase extra food and water. Nobody spoke about them on the news. When they earn perhaps $1,000 or $1,200 per month and pay up to $600 in rent, plus utilities, they are lucky (if they have a vehicle) to be able to put more than $10 of gas in it at one time.

I remembered several months ago when a young mother of five came to get food at Catholic Charities, where I volunteer. It was raining and she did not have enough gas to get home. I went to the station with her and paid for $25 worth of gas. She ran out in the rain to embrace me in gratitude. She could not remember the last time she had $25 worth of gas in her car!

When we heard that Ian had changed direction and was headed for Fort Myers and the surrounding area, people were told to evacuate. Again, as I watched on TV the endless lines of vehicles crawling across Alligator Alley toward the east coast, I thought of the invisible people. The poor people in Immokalee (almost 40% of the population) and all the other invisible people along the coast who could not evacuate — and, if they could, where would they go?

And what about the people who are homeless? Where would they go? What would happen to them? Where I live and work, many of the homeless are immigrant men who work in the fields and don’t speak or understand English. How do they get the message about shelters, and if they do go, they have nothing to bring with them. I have visited homeless camps. Most sleep in doorways or in the woods. Where did they go when the storm suddenly shifted direction? I am sure that many of them died and are known only to God if their bodies are ever found.

The storm came, the storm left, and the devastation is beyond imagining. Thousands of people are displaced and homeless. The long-term effects are indescribable; I call them the ripple effects. Even the inland communities of poor and working people are suffering. In agriculture, the first plantings of the ground crops (tomatoes, peppers, potatoes) and many of the fruit trees were destroyed. There will be no work until the land is cleared and the second planting is done.

Those who work in landscaping, the hospitality industry, restaurants and other businesses will have no employment for a long time to come. A week after the hurricane, a young working, single mom came to Catholic Charities asking for help. She had commuted to Fort Myers every day to work in a bakery. The bakery was destroyed in the storm. She needs help to pay her bills and get food for her family until she can find work again. We are blessed that we can help. There will be many more like her coming to us in the next weeks.

As news of the hurricane and its aftereffects fade from public attention, we cannot forget the long-term suffering left all over Florida. And let us never forget the invisible people who are always among us. They never have many options, and disasters just add to their suffering. The invisible people that I know are resilient, hopeful and faith filled — knowing and believing deeply that God walks with them always.