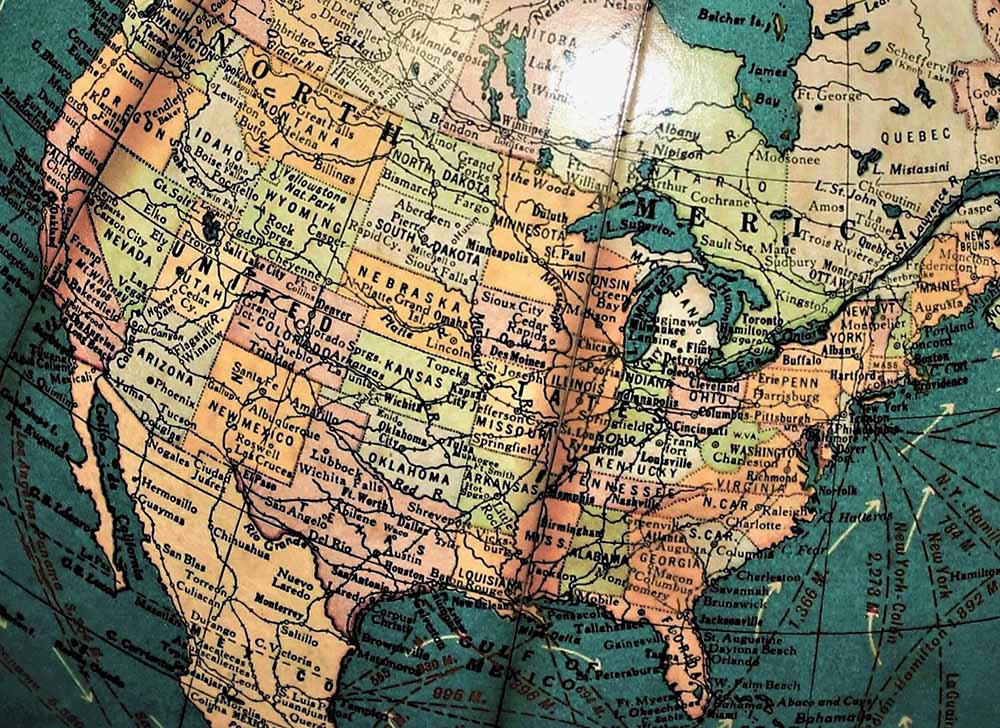 My hometown of Toledo, Ohio, incorporated in 1836, has approximately 270,000 people and the motto Laborare Est Orare, to work is to pray. Since early 2020, many jobs across the country have been negatively affected by COVID-19, causing unwelcome unemployment. Toledo had an unemployment rate of 5.6% — 15,120 Toledoans unemployed! Referring to the city's motto, even though many local folks aren't working, most likely they're definitely still praying.

Toledo is the fourth largest city in the state of Ohio — which also has a religious motto, With God, All Things Are Possible. But given the contentious national events since Election Day in November 2020, the lies spread about election validity, and the insurrectional show of violence in Washington, D.C., on Jan. 6, 2021, religious inclinations haven't been too evident here or anywhere. Thankfully Congress acted quickly to restore order after the events of Jan. 6.

As a result, I am imagining a meeting of all the state mottoes like this:

Once upon a time, there was a country having 50 states, a District of Columbia and five territories. This country was established in 1776 as a democracy having 13 original colonies, and, over the decades, it grew into a beacon of freedom that inspired the whole world.

This country elects a president every four years, with November 2020 having been the most recent election. The individual elected, President Joseph Biden, was inaugurated on Jan. 20, 2021, the date prescribed by law.

The gathered mottoes represented the entire country, from Indiana's The Crossroads of America to Minnesota's L'Etoile du Nord (The star of the north), from Utah's Industry, Tennessee's Agriculture and Commerce, to Oro y Plata (Gold and silver) of Montana. Si Quaeris Peninsulam Amoenam Circumspice (If you seek a pleasant peninsula, look about you) — at Michigan. Kansas goes Ad Astra per Aspera (To the stars through difficulties), while Alaska maintains it's North to the Future! There was cause for celebration, according to Hawaii: Ua Mau ke Ea o ka 'Aina i ka Pono (The life of the land is perpetuated in righteousness).

Unfortunately, the November 2020 election was contentious since the incumbent would not concede, so even in Arkansas, it took a while for Regnat Populus (The people rule) to fully manifest. Maine may say Dirigo (I lead) but it was not demonstrated, other than by those who incited the insurrection at the Capitol. But the new president upon his inauguration seized those leadership reins and is already showing Dirigo.

Fear of the democracy being destroyed gripped the people, in spite of Idaho's Esto Perpetua (Let it be perpetual). Was another Civil War brewing? Democracy was the concept intended to be perpetual, not division. Esto Perpetua represents freedom — a positive to be carried on.

The recent months' troublesome lies and destruction were beaten back, inspired by Alabama's Audemus Jura Nostra Defendere (We dare defend our rights!) and Sic Semper Tyrannis (Thus always to tyrants — Virginia). New Mexico's Crescit Eundo (It grows as it goes) created an awareness of what was really happening: that a few separatist, fractional, malicious and misguided individuals tried to overtake the Capitol and, frighteningly, even to harm legislators.

But the mottoes quickly realized that democracy, not darkness, prevailed because Oregon Alis Volat Propriis (She flies with her own wings) as the country was aghast at the domestic attack. Instead, South Carolina said Dum Spiro Spero (While I breathe, I hope) and watched the counterattack as Congress held a business session the evening of the insurrection, not adjourning the session until early the next morning.

Alki (By and by), Washington, with Mississippi's Virtute et armis (By valor and arms) watched law enforcement regain control of the Capitol. North Carolina restored order, crying Esse Quam Videri (To be, rather than to seem). And with Oklahoma reminding that Labor Omnia Vincit (Labor conquers all things), additional efforts were expended to quell the riot.

All the state mottoes continued to hold high expectations for this democracy. Liberty and Independence (Delaware). Our Liberties We Prize and Our Rights We Will Maintain (Iowa). Live Free or Die (New Hampshire). Liberty and Union, Now and Forever, One and Inseparable (North Dakota). Virtue, Liberty, and Independence (Pennsylvania). All for Our Country (Nevada). Montani Semper Liberi (Mountaineers are always free — West Virginia).

All the state mottoes continued to hold high expectations for justice and prosperity. Salus Populi Suprema Lex Esto (Let the welfare of the people be the supreme law — Missouri). Justitia Omnibus (Justice for All — District of Columbia). Wisdom, Justice, and Moderation (Georgia). Equality Before the Law (Nebraska). Liberty and Prosperity (New Jersey). Equal Rights (Wyoming).

The newly inaugurated president, a seasoned public servant with a reputation as a peacemaker and collaborator, urged the unity demonstrated by Maryland — Fatti Maschii, Parole Femine (Strong deeds, gentle words) — as he clearly shared his visionary plan about restoring unity, health and opportunity for all.

Several mottoes reminded the group that they reflect the influence of a higher power, realizing the wisdom and guidance of something higher and larger than themselves. American Samoa, Muamua Le Atua (Samoa, let God be first). Arizona, Ditat Deus (God enriches). Nil Sine Numine (Nothing without providence — Colorado). Under God the People Rule (South Dakota). In God We Trust (Florida). With God All Things Are Possible (Ohio). Focusing on a higher power calls out the best in all of us.

All the mottoes were of one accord. No faction or destructive domestic force or negative show of power would or could shake the foundations of the country. Democracy is and has always been the fundamental quest and objective, no matter how it has been expressed by the mottoes over 357 years since 1664, and all the mottoes couldn't be more relevant. The oldest motto present, Rhode Island's 1664 Hope bore an uncanny resemblance to the second newest motto present, U.S. Virgin Islands' 1991 United in Pride and Hope, penned more than 300 years later. All agreed that the sentiment is the same, even if the words may be different.

The mottoes rejoiced in acclaiming with the newest (2002) — Kentucky's Deo Gratiam Habeamus (Let us be grateful to God) — because the USA will always say, with California, Eureka (I have found it!) as the exclamation of democracy we appreciate yet re-create each day.

The mottoes all held firm, not to be swayed. "We've come too far, we've worked too hard, and we've expended incredible efforts to remain free across our land. Nothing now or in the future will change our resolve."

And the USA's motto, In God We Trust, smiled knowingly, pleased with that resolve.

The mottoes then returned to their home states, excited to take their rightful places serving as motivational phrases, uplifted by the renewed bond of solidarity, and ready to remind their own citizens that democracy is precious and must be held at all costs.

And unemployed Toledoans join with everyone across the country in hoping for jobs once again, so that their noble work can become a grateful prayer.