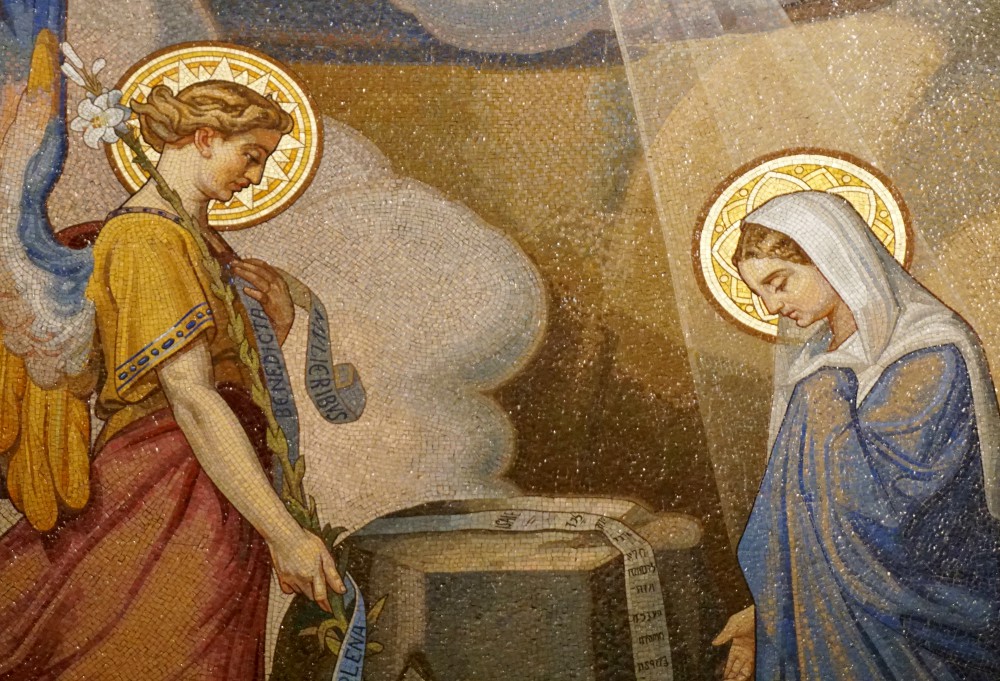 The Annunciation is depicted in an 1896 mosaic by Melchior Doze in the Basilica of Our Lady of the Rosary of Lourdes, France. (Wikimedia Commons/Hammondtravels)

During my novitiate in the 1960s, I was introduced to the inspiring poem A Woman Wrapped in Silence by John W. Lynch. We used that account of the Annunciation as the narrative for a tableau on the occasion of the superior's feast day.

Surprisingly, it is difficult to find much biographical information about the author, though the poem is quite well-known. Divided into 16 sections, it is a touching meditation on Mary's life from childhood

This was the little child who knew not man,
Nor life, nor all the needed frauds of life,
Nor any compromise ...

through her life after Jesus' ascension

She was a woman now who was alone with time,
And in her heart, the wait and ache of time.

Meditating on my connection with her — like me, she seems not to have had any brothers or sisters — I recalled my first attempts to socialize with neighbours' children and classmates at school. I never felt different from them, though I was above average in both academic and cultural subjects.

In high school, I came in contact with the Sisters of Charity. In those days, they were very private about their families and backgrounds but I was inspired by their commitment, dedication, practical spirituality and some intangible qualities — they were connected with God and with people. I wanted whatever it was that they had.

It was during my novitiate that I first became aware that my being an only child might cause me to feel uncomfortable among some sisters. But then I was introduced to

A woman wrapped in silence, and the seed
Of silence was her heart that tried to give
All that it held to give and ever more.

I began to understand that I would always have a unique bond with this woman and her only Son. The "all" that my own heart longed to give was just as much as what anyone else had to give.

The lines that have particularly remained with me for 55 years of life as a Sister of Charity refer to God "Who made all power, paused, and suppliant, was powerless ..." waiting for the yes of Mary!

I ask myself in times of reflection, "Is God still waiting for me to discover what has been planned out for me? Are the signs there but I continue to miss them?"

But I am encouraged when the poet reminds me that this woman who is full of grace and completely dedicated to God retains the frailty and weakness of any pregnant woman:

God gives me strength to face any challenge, but it is the strength of Jesus that will carry me through. As St Paul writes, "for Christ's sake, I delight in weaknesses, in insults, in hardships, in persecutions, in difficulties. For when I am weak, then I am strong" (2 Corinthians 12).

I continue to learn lessons from Mary and others — like Sts. Bernadette and Thérèse.

An experience that gave me an insight into the heart of Mary was my visit to Lourdes about 10 years ago, where I had a close encounter with Bernadette. I first visited the site of the Boly flour mill where her father made a successful living until the Industrial Revolution took its toll. Poverty forced the family — father, mother, two daughters and two sons — to live in Le Cachot, a small prison intended for overnights or short stays. It was from there that Bernadette and her sister left to gather wood for the fire and where Mary appeared to her at the Grotto.

In the years since I made that pilgrimage to Lourdes, I have thought of Bernadette almost every day. I ask her to obtain for me through Mary a love of simplicity and a desire to enjoy being the person I am, the one God wants me to be.

This year, the people of Australia welcomed the relics of St. Thérèse of Lisieux and of her parents, Zélie and Louis Martin, for a tour of churches, schools and university campuses. St. Thérèse has a special connection for Australians, as she was named one of the principal patrons of our "young and free" country, along with Mary, Help of Christians and St. Francis Xavier.

I also have a special connection with St. Thérèse as I took the name Thérèse at my confirmation.

Thérèse was even less known in her lifetime than Bernadette Soubirous. Her father was a jeweler and watchmaker and her mother a successful lace maker. At an early age, Thérèse was excluded from social contact because of illness and so she was very much unknown. But on Nov. 20, 1887, during a general audience with Pope Leo XIII, Thérèse approached the pope, knelt and asked him to allow her to enter Carmel at 15. The pope told her to do what the superiors decided, and assured her that she would enter if it were God's will.

Thérèse's time as a postulant began with her welcome into the Carmel on Monday, April 9, 1888, and she spent her short life as a cloistered Carmelite. She had extraordinary insights into God's intervention in her life and in the lives of others before dying from tuberculosis at the age of 24.

When I reflect on St. Thérèse's parents, I think about the faith and generosity of my own mum and dad. They would have been such proud and delightful grandparents, but they encouraged me and supported my decision to enter the Sisters of Charity — despite some contrary opinions of family members. I hope that over the years they experienced blessings, connections and opportunities that compensated for a somewhat isolated and devoted life.

On the feast of the Annunciation, I always acknowledge the many messages that God sends to me and pray for the grace to respond with courage and love, remembering Jesus' words:

"My grace is sufficient for you for my power is made perfect in weakness" (2 Corinthians 12:9).

[Angela Burke is a Religious Sister of Charity of Australia with an academic background in speech/drama and archives administration. Present volunteer ministries include Vision Australia in service to the blind, Jesuit Refugee Services, the congregation's own Heritage Center, and singing at Sunday liturgies in Sydney.]