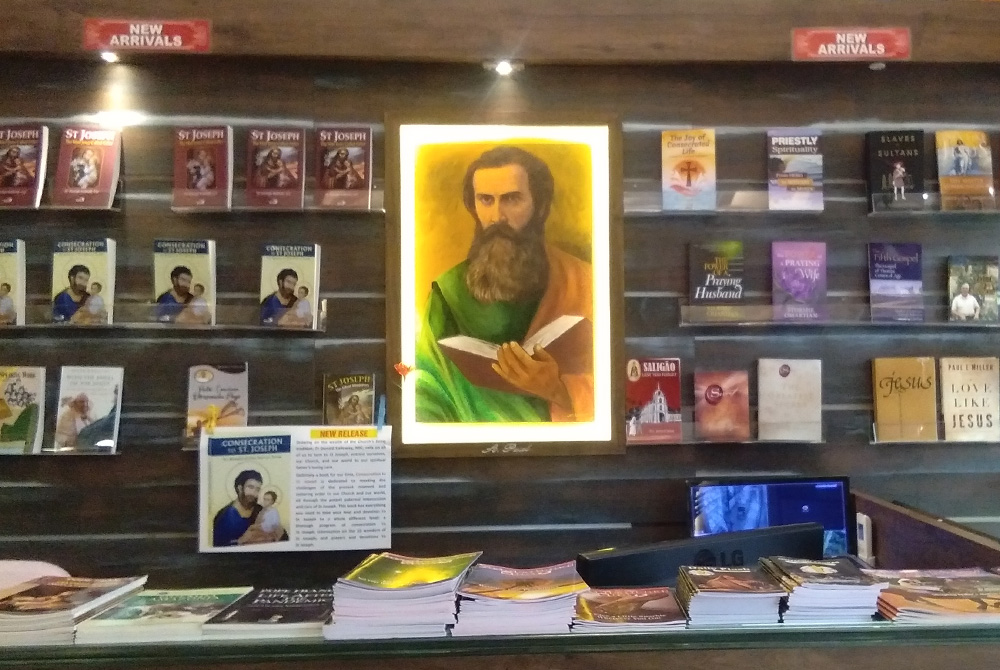 A painting of St. Paul hangs behind the counter at the Pauline Book Centre in Panaji, Goa, in India. The feast day of St. Paul is June 29. (Courtesy of Lissy Maruthanakuzhy)

For me, as one of the Daughters of St Paul, the month of June is a time of reflection and study on the life, mission and writings of St Paul, in preparation for his feast day June 29.

Paul, a deeply religious person, was captured by Christ, en route to Damascus. Immediately Paul realized the worthlessness of all his knowledge, academic preparations and popularity. His pride was crushed into oblivion in the unexpected meeting with Jesus. The man who traveled with the determination of destroying the followers of Christ, reached his destination with another mindset — to live for Christ and to build up his kingdom. But he was struck blind. Now he sought light from the very people whom he sought to destroy. Christ had suddenly become real to him, a loving and living person, calling him to join the band of his disciples.

He was empowered to be his emissary. He was promised suffering but assured of Jesus' presence beside him. Paul heard the voice of Jesus: "Be fearless; speak out and do not keep silence: I am with you. I have so many people that belong to me in this city that no one will attempt to hurt you" (Acts 18:9-10). This assurance by the Lord must have worked like a courage-installing vaccine for all seasons! What more do we need in life than the assurance of God's constant presence with us?

He believed that the Lord was giving him the grace to face the difficulties in his mission. He wrote to the Corinthians, "But we hold this treasure in pots of earthenware, so that the immensity of the power is God's and not our own. We are subjected to every kind of hardship, but never distressed" (2 Corinthians 4:7-8).

Each of us holds this treasure of Jesus in our hearts. If we were aware of it, we would be on fire with zeal like Paul, would be creative in sharing the message of the Gospel through various activities, according to the signs of the times.

Paul was always creative. His missionary journeys are examples of his creative ventures.

In his book Let Us Dream Pope Francis refers to Paul's Damascus experience as a "COVID moment" in his life: a moment calling for change, or ripe for change.

Blessed James Alberione had a "COVID moment" when at age 16 he was dismissed from the minor seminary, his initial enthusiasm thwarted by excessive reading. His mother understood his predicament and supported him with prayer; his elder brother — a farmer — encouraged him to pursue his heart's desire saying, "Boy, if you want to study and become a priest, go ahead. I will work harder to make up for your absence." Gradually he got over the crisis moment.

Reentering the seminary, he realized, "If reading can mislead me, it has the power to build up young minds like me." His enlightenment — matured with prayer, spiritual accompaniment and academic preparations — flowered into the Pauline family. 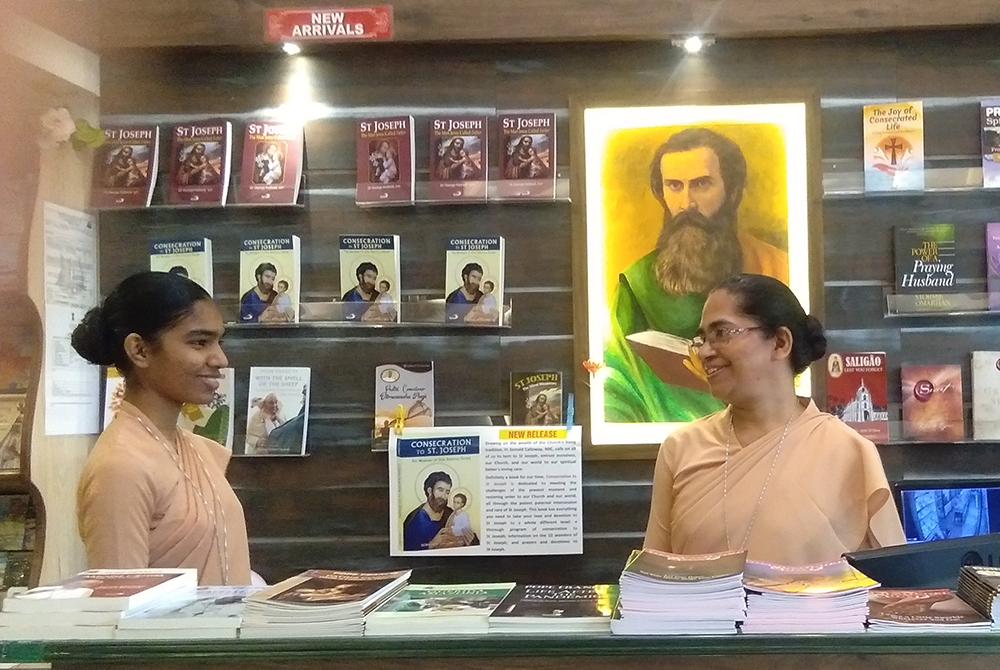 Sr. Priyadarshini Nayak, left, and Sr. Priya Paul are pictured at the Pauline Book Centre in Panaji, Goa, in India. A picture of St. Paul hangs behind them. (Courtesy of Lissy Maruthanakuzhy)

At this moment of pandemic we are in a crisis. I feel the call to change knocking at the door of my heart. I can feel the call of our founder who, in the moments of difficulties, exhorted his sons and daughters for an examination of conscience and confession. A purified heart allows the light of Christ to shine better.

Paul retreated into the desert of Arabia for introspection, returning after 14 years, refreshed and renewed for a new journey.

In moments of decision-making, we are told that Alberione would close himself in his room for a day or two. His spiritual guide, Canon Chiesa, would allow him to spend this time with God; at the end of his silent days Alberione came out with new projects.

In Let Us Dream, Pope Francis said that crises call for change, and that we come out better or worse but never the same; the trials are the means to growth.

As a young priest James Alberione welcomed the opportunity to use the media of social communications to spread the Gospel. It was a novel idea coming from a priest. He rejoiced when the bishop asked him to edit the diocesan newspaper, among his other responsibilities. At that time, the church had not yet realized the importance of new discoveries in communications.

There he is: humble, silent, tireless, always vigilant, recollected in his thoughts, which run from prayer to action; always intent on scrutinizing the 'signs of the times,' that is, the most creative ways to reach souls. Our Fr. Alberione has given the Church new instruments with which to express herself, new means to give vigor and breadth to her apostolate, new capacities and a new awareness of the validity and possibilities of his mission in the modern world with modern means. Dear Fr. Alberione, allow the Pope to rejoice in your long, faithful and tireless work and in the fruits, it has produced for the glory of God and the good of the Church.

Alberione's convictions helped him over the initial objections even from his own friends. His trust in the providence of God gave him unimaginable confidence that his venture was pleasing to God.

His life calls me to examine myself: Am I at this moment of crisis prepared to think out of the box? To think about alternative ways to reach out to the people of God? Our usual ways to them are closed — schools where we organized collective distribution; our book centers — places of meeting and dialogue for the customers. We are encouraged to maintain social distance and avoid gatherings. Can I accompany them from the silence of my room, inside of the center? Can I get to know their aspirations, pains and struggles through social media?

On a similar note, Pope Francis said in his message for the 55th World Communications Day: "Every tool has its value, and that great communicator who was Paul of Tarsus would have certainly made use of email and social messaging."

Inspired by the universal spirit of St Paul, at the turn of the last century, Blessed Alberione perceived with clarity and prophetic foresight the needs of the people of God. Seeing the power of the press and the newspapers to reach and move the masses, who were leaving the church in ever-increasing numbers, he wanted to put these same powerful means at the service of evangelization in the church. As we explain here, Alberione saw the mission of communication not as a "business," but as preaching, as an exercise of the ministry of salvation, in which we offer Jesus as a gift to others.

How can I step into the new normal now, to continue my mission of sharing Jesus?