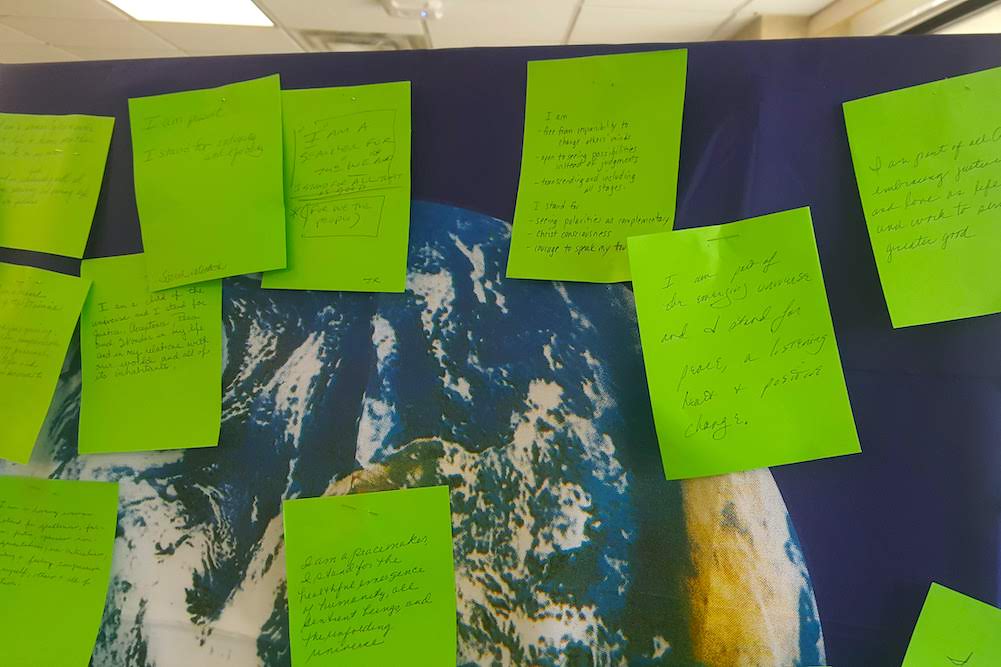 Wisdom affirmations from participants in the "Enter the Chaos: Engage the Differences to Make a Difference" workshop held Feb. 13-16 at the Bon Secours Retreat and Conference Center in Marriottsville, Maryland (GSR photo/Gail DeGeorge)

In the past few years, I've learned to carefully sidestep certain topics with family members and some friends who I know have different political leanings than me. However, I don't want my silence to be misinterpreted as acquiescence. I'd like to be more balanced, more centered, less prone to frustration and anger in these tense times. And I want to adopt a regular practice of contemplative prayer, something I've tried for years but never fully developed.

So when I saw the title of the retreat and workshop offered by the Institute for Communal Contemplation and Dialogue, "Enter the Chaos: Engage the Differences to Make a Difference," I knew I had to attend. Even better: One of the sessions was at the Bon Secours Retreat and Conference Center in Marriottsville, Maryland, about a 30-minute drive from where I live.

After I registered, I had some doubts. What if you had to be a woman religious or, at least, someone with a regular habit of contemplative prayer, a calm and collected soul, to really benefit? But when I emailed about those concerns, the reply from Sr. Nancy Sylvester, a member of the Sisters, Servants of the Immaculate Heart of Mary and founder of the Institute for Communal Contemplation and Dialogue who would co-lead the workshop, was reassuring. No such prerequisites were needed. The best preparation, she said, was to "do your contemplative sitting — don't worry about whether it is daily or not."

The 40 or so participants at the Feb. 13-16 workshop were a mix of laywomen (and two men) from parishes in New York, New Jersey, Maryland and Virginia as well as women religious from various congregations. Some attendees were pastoral ministers. Most attendees were of Catholic or Christian denominations. One was Jewish. Some already had regular contemplative practices. Others, like me, were wannabes.

Yet as we introduced ourselves, it was apparent how much we had in common. Nearly all of us had someone in our lives, sometimes multiple people, with whom we could no longer talk frankly without fear of discord. The political division in our nation had fractured our personal relationships. We were all looking for ways to build bridges. 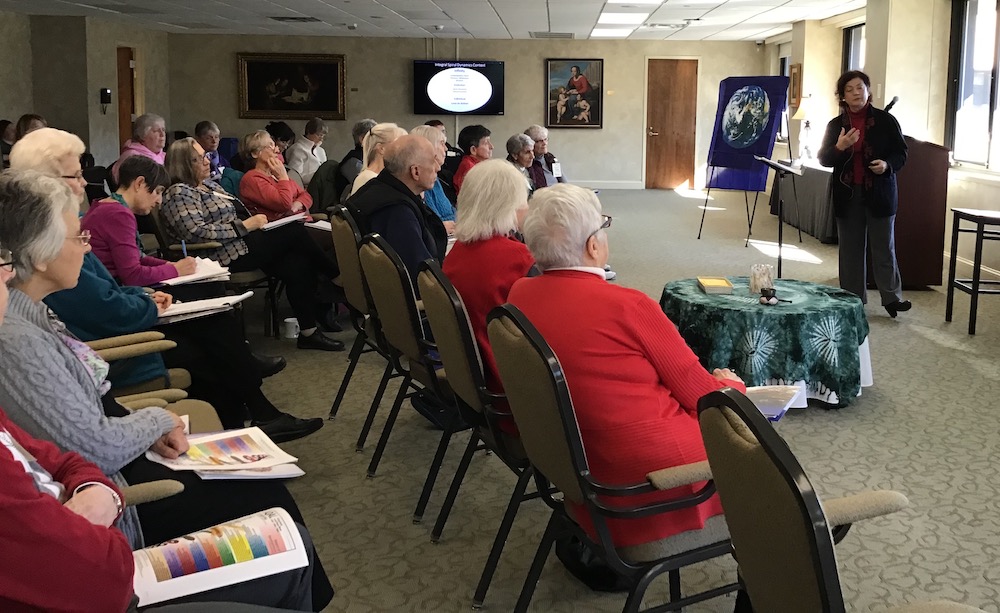 About 40 people attended the Feb. 13-16 workshop "Enter the Chaos: Engage the Differences to Make a Difference" at the Bon Secours Retreat and Conference Center in Marriottsville, Maryland. (Courtesy of Nancy Sylvester)

Sylvester, a regular columnist for Global Sisters Report, and Sr. Margaret Galiardi, a Sister of St. Dominic of Amityville, New York, who also has written frequently for GRS and who has worked with Sylvester in designing other programs, led us through contemplative prayer, guided meditations, reflections and role-playing. Vernice Solimar, former chair of Consciousness and Transformative Studies at John F. Kennedy University, walked us through the integral theory of spiral dynamics, a model that uses colors and tiers to explain levels of psychological and social development. This was new to me, but Solimar has spent years studying, teaching and using this model.

It was humbling and gratifying that the three facilitators were taking their collective years of experience and the months spent developing the "Enter the Chaos" program for a four-day workshop for us to deepen our individual consciousnesses and awaken new levels of awareness and engagement.

"We believe contemplation is a transformative practice, that it has lots of connections to all of social justice in all its dimensions and that we need to live it within our interconnectedness a planetary community," Sylvester told us at the opening session. "We are at what many systems thinkers say is a chaos point. We have to make choices about how we are and what we do. But it is as much about our interior life as it is about our external."

The workshop is designed to weave together some major refrains, she said: to deepen our contemplative practice, demonstrate how that practice transforms us individually and collectively, understand spiral dynamics and the evolutionary process, and how to act out of a "contemplative heart," to put what we learned during the workshop in practice in personal and social justice issues.

We were invited to call to mind the person or people with whom we've had conflict or been wary of engaging with and envision an encounter from a new space in which we respond rather than react and suspend our own beliefs and opinions to appreciate and be open to discover a new possibility of exchange.

A checklist of reflection questions helped create a framework for this imagined encounter: What do I appreciate about that person? What are my assumptions, fears, concerns about them? How do I avoid language that has blame or shame? Other role-plays involved discussions on social issues such as migration and refugees that encouraged us to understand how others operate and how to engage in constructive dialogue.

Contemplative practice is essential to this process because it opens new neural pathways in our brain, encouraging us to live and act out of our deepest selves, the facilitators told us.

The workshop itself is the result of an evolutionary process. Solimar was invited to a workshop Sylvester gave on contemplative prayer in February 2016 in which she mentioned the stages of consciousness. Solimar approached her later in the workshop and shared her own background in the field of spiral dynamics. They connected again in April 2018, when Sylvester and Galiardi, who had joined the Institute for Communal Contemplation and Dialogue in 2011 and worked with Sylvester in developing and delivering other workshops, were looking to develop a program that would more closely link contemplative practice with stages of consciousness and spiral dynamics.

Solimar, Sylvester and Galiardi spent hours on Zoom calls as they shared experiences and ideas on how to shape the retreat and workshop. The first workshops were held in 2019, and more were planned through the rest of this year.

I found the whole retreat and workshop fascinating and rich for further thought, consideration and, yes, contemplation. Throughout the weekend, I felt my interior ground shift. I approach life somewhat skeptically — 30-plus years as a journalist will do that — yet I found my hard edges softening as I learned new tools and techniques. 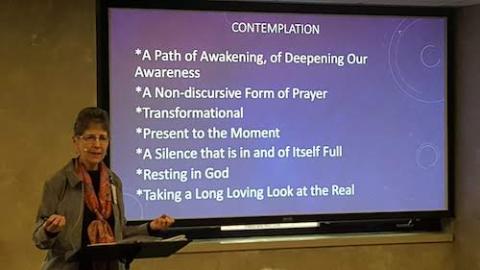 Sr. Nancy Sylvester at the opening of the "Enter the Chaos: Engage the Differences to Make a Difference" workshop held Feb. 13-16 at the Bon Secours Retreat and Conference Center in Marriottsville, Maryland (GSR photo/Gail DeGeorge)

We are not out to "convert" someone to our position, the facilitators reminded us, but to better understand our own views and motives — and that of the other person. In doing that, we try to form new commonalities. Asking "generative questions" that invite greater awareness and curiosity, such as "Help me understand why you feel this way" and "What are some other possibilities in addressing the issue," is part of this. Tone, of course, is everything, and I still need to work on making the questions sound welcoming and neutral, not prosecutorial.

But it wasn't just newbies like me who were impressed.

"Best workshop I've ever attended," Sr. Fran Gorsuch, a Sister of Bon Secours and a veteran of dozens of retreats and workshops, said to the group at a closing session. "The obvious preparation, prayer, work and struggle they put into this weekend — it shows."

Kay Furloni, one of six parishioners attending from the Church of the Presentation in Upper Saddle River, New Jersey, was likewise enthusiastic. She and the others planned to discuss how to bring key lessons to others in their justice and peace ministry and the wider parish.

"It affirmed for me the importance of contemplative practice every day," she said.

Weeks after the workshop, that lesson is underscored for me, as well. I am more committed to contemplative practice and miss it when I don't do it, as my day feels off and I'm not as centered and balanced. I haven't sought out difficult conversations yet, but I feel more prepared to engage in them when I do.