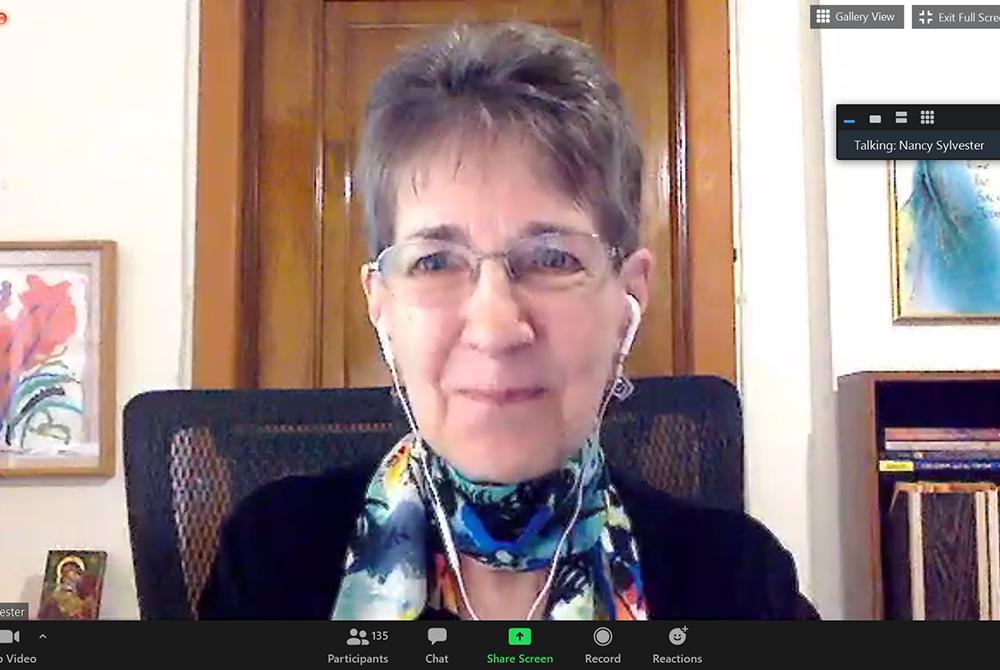 In these tense and troubled times, the spiritual and emotional balm offered through a regular practice of contemplation is more important than ever, Sr. Nancy Sylvester, founder of the Institute for Communal Contemplation and Dialogue and member of the Sisters, Servants of the Immaculate Heart of Mary of Monroe, Michigan, said during Global Sisters Report's first Witness & Grace: Conversations with Sisters program Sept. 3.

More than 850 participants attended the morning and afternoon sessions on Zoom or watched via YouTube. (Apologies to those who tried to attend and couldn't for various technical reasons. A recording of the session is available here.)

We knew she would draw an audience because of the importance of her message and her own following. Her Contemplate This columns, which she has written for Global Sisters Report since its launch in 2014, often have the highest readership of the month. She is well-known through her various leadership roles: She has served as a president of the Leadership Conference of Women Religious, an elected leader of her congregation and the head of Network, the Catholic social justice lobby.

I felt I had gotten to know Nancy a bit through her columns and our conversations during visits in Detroit and at LCWR assemblies. I also participated in an "Enter the Chaos: Engage the Differences to Make a Difference" workshop in February, offered by the Institute for Communal Contemplation and Dialogue and developed with Sr. Margaret Galiardi, a Sister of St. Dominic of Amityville, New York, and Vernice Solimar, former chair of Consciousness and Transformative Studies at John F. Kennedy University.

Yet I learned so much more about Nancy and contemplative practice during our Witness & Grace conversation. She shared her spiritual journey and invited participants to recognize similarities in their own paths. 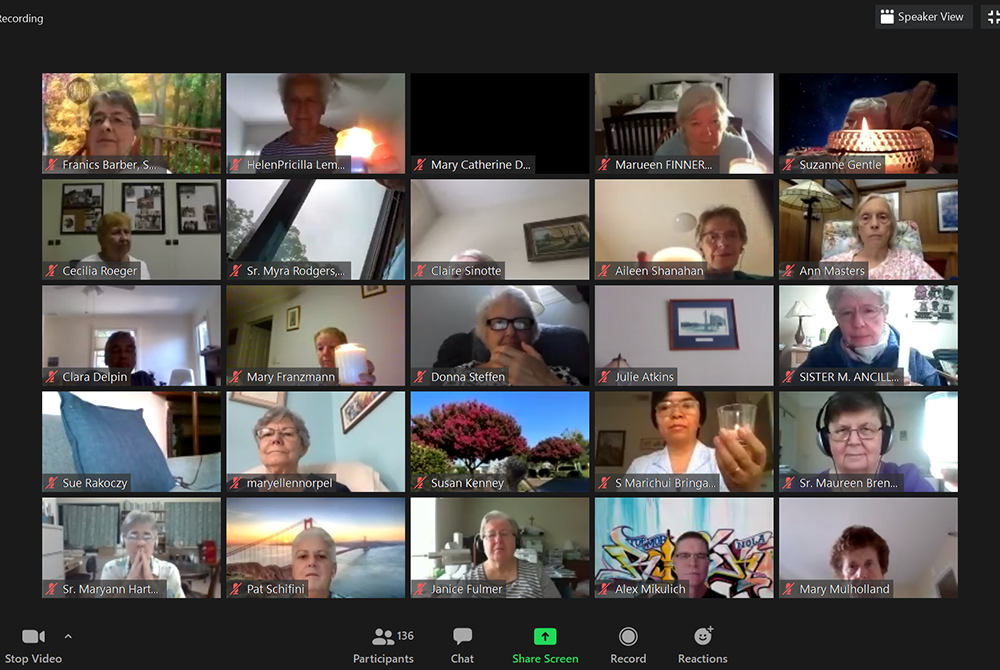 She came from a traditional "Chicago Catholic schoolgirl" upbringing, developing over time to adapting and embracing contemplative practice as a form of prayer, a communal experience and way to address unjust social structures.

Her own social consciousness was awakened after the Second Vatican Council, as she was drawn to new theology and Catholic social justice teaching, including papal encyclicals beginning with Pope Leo XIII in 1891 that connect faith and the issues of human rights, economic justice and political responsibility.

By her late 20s, the way of praying that had sustained her growing up no longer worked, she said. During her 15 years working to change public policy at Network in Washington, D.C., she was also reading liberation theology as well as feminist, womanist, mujerista and Black theologies and eco-spirituality, she said.

She was introduced to the writings of Trappist monk Thomas Merton during her formation. She was drawn to the poetic insights of Fr. Anthony DeMello, an Indian priest and psychotherapist, and continued to read and deepen her understanding of French philosopher Jesuit Fr. Pierre Teilhard de Chardin and evolutionary theory, which prompted her to "to rethink how Divine Mystery permeates the universe." She read of Ken Wilber's integral theory philosophy, discovered spiral dynamics by Don Beck and became familiar with the principles of quantum physics, which, she said, "helped me see that we are all connected, that we can live out of a both/and world, and I could embrace change as the only constant."

A spiritual director set her on the path of contemplative prayer. Nancy recounted how the writings of Sr. Constance Fitzgerald, a contemplative theologian and cloistered Carmelite from Baltimore, Maryland, and others such as Cynthia Bourgeault, an Episcopal priest and modern mystic, deepened her understanding and appreciation for contemplative practice. Other influential writers included Evelyn Underhill, an Anglo-Catholic writer, Benedictine monk John Main and Thomas Keating, a Trappist monk and a principal developer of centering prayer.

I shared with participants my own experience from the "Enter the Chaos" workshop, which is being adapted to be offered online because of the pandemic.

I confess I am a contemplative wannabe. I long for that spiritual time with God and the benefits of it, but I fail to practice it daily. When I do, I find I can be easily distracted. But I still draw on three key lessons from the workshop.

First, I am more convinced of the importance of setting aside some time for contemplative practice, so now, I build it into my daily schedule. (For me, mornings are busy with other prayer practices and focused on work, so I schedule a session around lunch, giving my mind and spirit time for renewal as well as my body.) The more I practice, the less I am distracted. It has also made me more grounded, less reactive — key benefits in this difficult time. Finally, I am also more aware, as I enter contemplative space, of others. I take a moment to think and hold in my heart others who may be entering or in a contemplative space at that same time, and that sense of connection is affirming and sustaining.

Throughout her presentation, Sylvester came back to that point: Contemplation is a communal experience. She noted that the Institute for Communal Contemplation and Dialogue has a Contemplative Sitting Network, which has close to 1,000 people in the United States and 23 other countries "who sit for 20 minutes every morning with the intention of opening to God's working within us for the transformation of the world," she said. 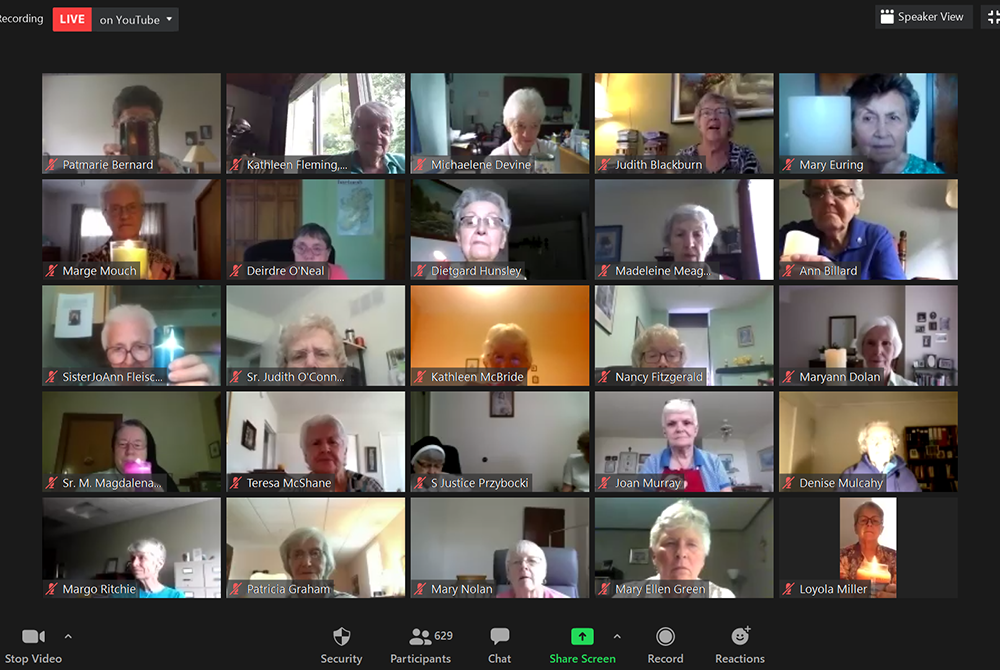 She then led us on a shorter version of a contemplative sitting. To those new to the practice, she suggested two methods to choose from. The first, the use of a mantra or following your breath, includes a simple phrase like "Jesus, mercy," with one word on the in breath and the other on the out breath. The other, drawn from centering prayer, suggests finding a simple word to say whenever a thought or distraction comes by. Don't place your attention on the word, but simply let it go after it is said.

Regardless of the practice used, she said, what is most important is to set your intention to be "open to God working within you."

We lit candles and held them up to our computer cameras, and across Zoom, dozens, hundreds of lights could be seen. For the next 10 minutes or so, we entered that contemplative space together, forging a connection through a special type of prayer that may transform ourselves and, indeed, our world.