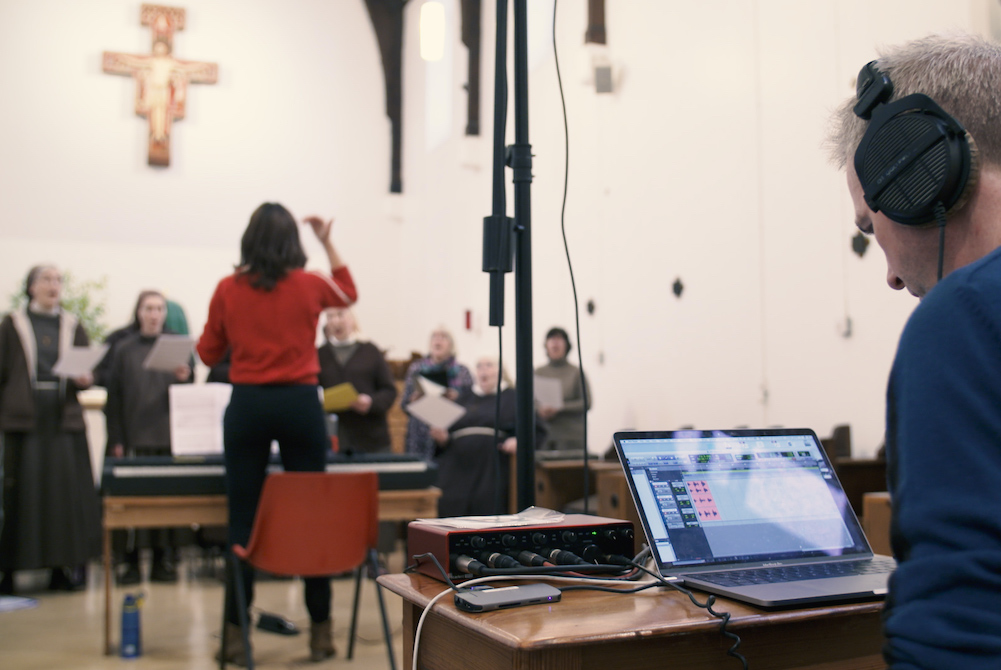 James Morgan, right, checks the recording levels as the sisters perform some of the music to which St. Clare's writing was set for the first time for the album "Light for the World." (Morgan Pochin Music Productions)

The Poor Clares of Arundel in the United Kingdom live a quiet life of prayer in a modest convent in the Sussex countryside.

But when Morgan Pochin Music Productions approached them about making a CD of the sisters' singing, "suddenly, it seemed we had this chance of reaching out to so many people we will never meet and might be moved in their deep selves by a touch of God," Sr. Aelred Casey told Global Sisters Report.

And so, the community of 23 nuns, ranging in age from their 40s to their 90s, seized the opportunity to collaborate with James Morgan and Juliette Pochin. The husband-and-wife partnership highlighted that the music might provide young people with a way to find inner silence and calm in a noisy, pressurized world.

"There was nothing we wanted more than to be part of such an enterprise," Casey said.

The fruit of that endeavor is "Light for the World," released Oct. 16 by Decca Classics.

Music plays an important role in the community. Sr. Leo Faulkner told GSR that the sisters sing their morning and evening prayers daily.

"We also sing during the celebration of Mass. For us, music brings an added dimension, a deepening of our prayer together, a unity," she said. "We have a variety of music that we sing, ranging from traditional, including a few in Latin, to more modern hymns, psalms and songs. We enjoy singing in parts and trying out new material."

Described as "the original isolators" in some of the CD's publicity, the Poor Clares and their producers said they feel lucky that they managed to get almost all their recording sessions done before lockdown hit in late March because of the coronavirus pandemic.

"We had one last session scheduled which was canceled, but Juliette and James said they had enough recorded for them to work with that," Faulkner said.

Morgan and Pochin have composed, arranged and produced music for International Emmy Award-winning TV series such as "The Kumars at No. 42" and feature films, including the forthcoming movie "The Courier" starring Benedict Cumberbatch.

The couple formed their partnership as undergraduates at the University of Cambridge. Pochin, a classically trained mezzo-soprano, told GSR that they met when Morgan was the organ scholar at Trinity College Cambridge and she was in the choir. Morgan has worked at the English National Opera and conducted many of the U.K.'s leading orchestras, including the Royal Philharmonic Orchestra and London Philharmonic Orchestra. They have three children. 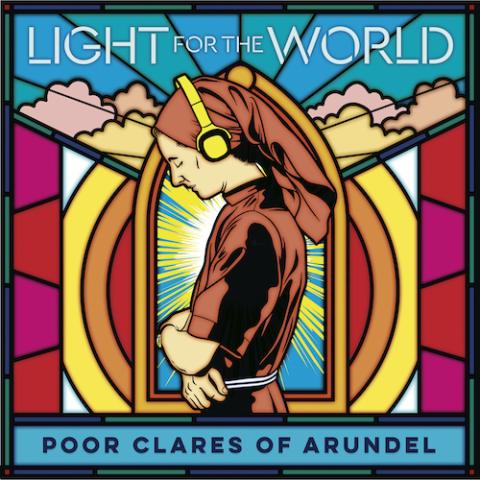 "We were looking for a community that enjoyed singing and were good at it," Morgan said.

But his invitation to the Poor Clares in Arundel was not just based on professional considerations: "I have a very old connection with these Poor Clares. The cousin of one of my mother's great friends is in that order."

Half of the CD is Gregorian chant.

"We tried to update it and make it a bit more accessible because I think a lot of young people today don't know Gregorian chant," Pochin said. "They don't go to church, and if they do, Gregorian chant is not necessarily heard that often."

Morgan, who was once a chorister at Westminster Cathedral, said there is not enough new liturgical music commissioned by the church.

"I think it is lovely that we are able to move the Gregorian chant into the 21st century for a younger generation," he said.

Both Morgan and Pochin co-wrote all the new music on the CD using texts supplied by the nuns from St. Clare's writings, which have never before been set to music. Casey said another member of the community, Sr. Gabriel Davison, chose "some of the lovely texts" from St. Francis and St. Clare. 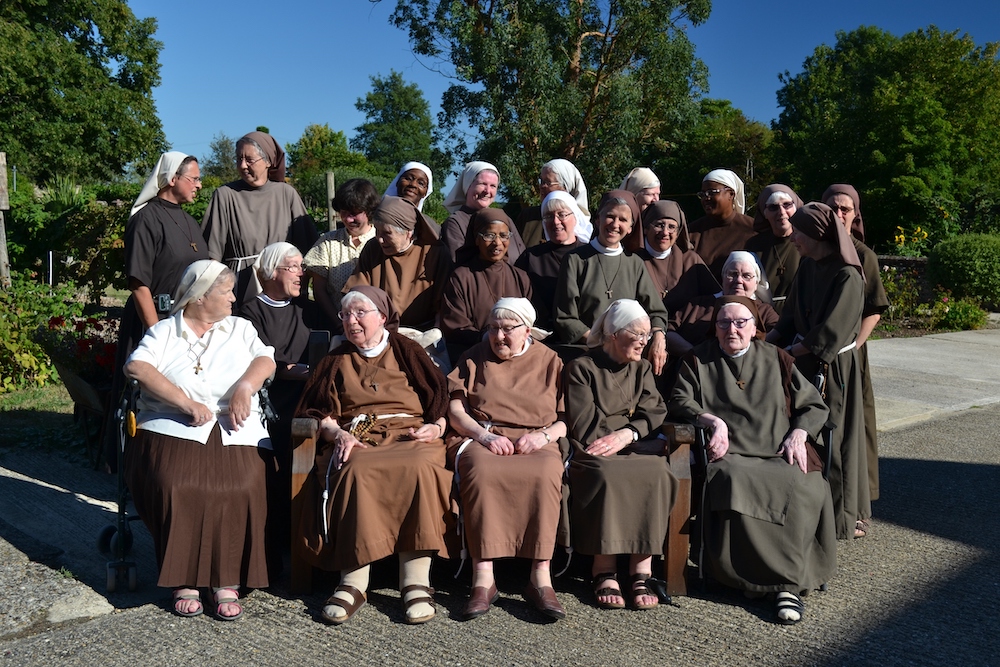 "James and Juliette were thinking of excerpts from ancient Latin hymns like 'Pange Lingua' or 'Veni Creator Spiritus.' We love these but did not want to be identified as a community whose diet was Latin and plainchant, as that is not us," said Casey, 77, who has been a Poor Clare since 1961. "We offered them some lines from the Psalms and one of the Gospels. These are also on the CD."

Morgan and Pochin wanted the CD to have a "simplicity of melody and accompaniment" and to create something that people who weren't necessarily religious could access.

The sisters "wanted particularly to lock into a younger generation," Morgan said. "They are very mindful of the fact that there is a lot of pressure on young people these days and a lot more mental health issues than there used to be. They wanted to see if they could help and give people a sense of what their community is like through music."

One of the conditions of making the CD, said Faulkner, 66, was that any sister, "whatever her singing capabilities, was free to join in. Four sisters chose not to, and of the remaining 19, 15 sisters formed the main singing group, attending every singing practice and recording session." 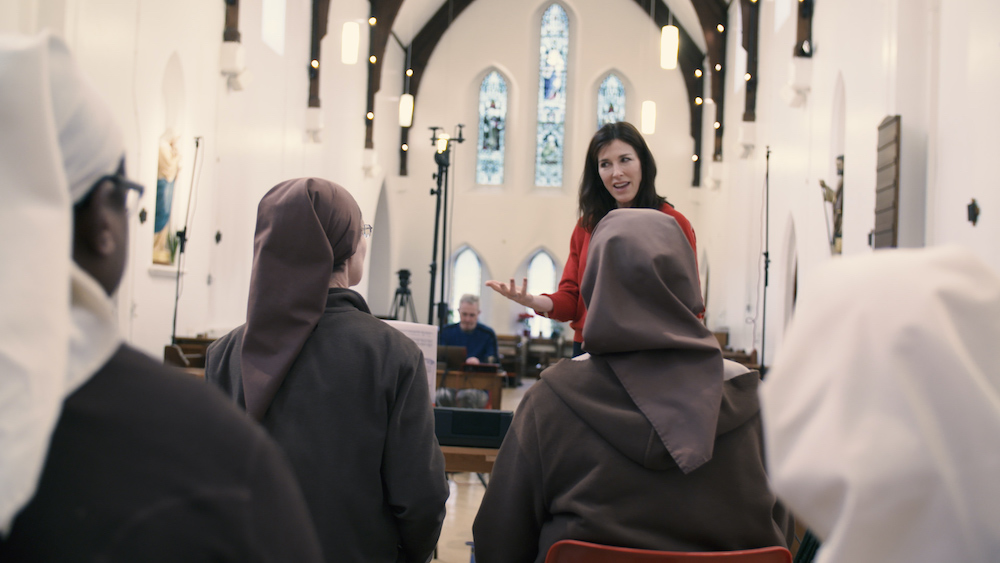 Opera singer Juliette Pochin, standing, works with members of the Poor Clares of Arundel to finesse their singing for the CD's recordings. (Morgan Pochin Music Productions)

Pochin worked with the nuns to finesse their singing.

"They love their singing and sing every day," she said. "They have some first-rate musicians."

The sisters had a few practice sessions with Pochin before recording.

"It was very much a community project, and they were a joy to work with," she said. "They wanted to improve and there was no ego, so that was really refreshing. They are some of the most contented people I have ever met."

Casey said the sisters benefited from Pochin's "teaching, her patience, her fine ear and her sense of humor.

"She never squashed anyone, just drew us on, and we were amazed at the results," Casey added. "We worked hard and loved every minute of it. Another inspiration was the way she and James worked together. We felt really privileged to be in their hands."

Now that the CD has launched, the community hopes it will offer "a bit of God" to listeners with an open heart as well as peace and reflection. 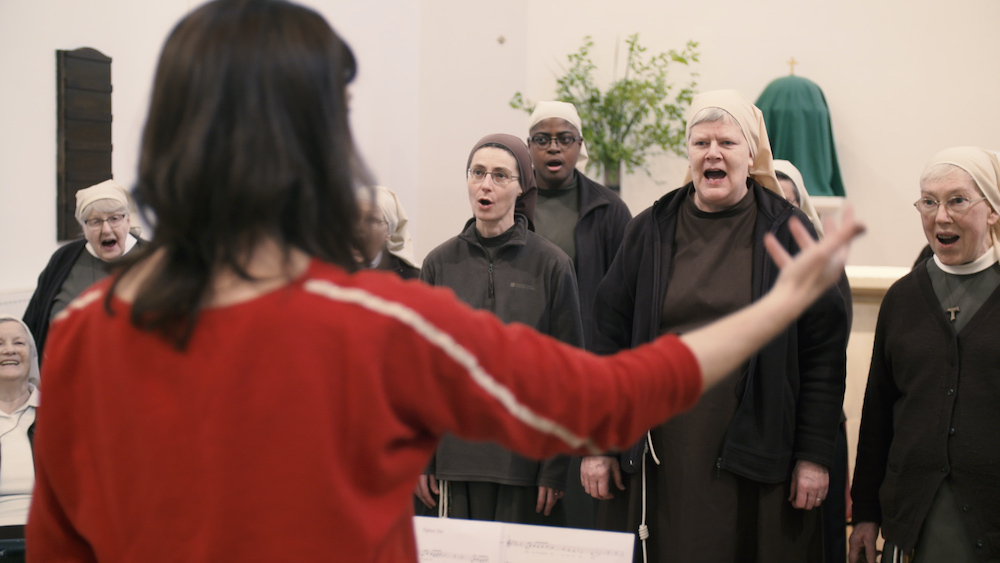 "We would love the CD to enable people to connect with Francis and Clare, those lovely iconic saints in whose footsteps we try to walk and who have such a wonderful spirituality for our present times of conflict, oppression, climate change and displacement," Casey said. "I'd be happy if some of the young people who might listen and have no bedrock of faith in their lives gained some sense of a person, a mysterious being out there whose meaning is love, as Julian of Norwich says, and that they are not alone in this tough world."

For Faulkner, the album is a prayer in itself.

"These are words we pray with, meditate on, ponder even without music, so being able to sing them definitely brings an added dimension, more depth, more breadth. For me, having the words set to music tends to make them more memorable."