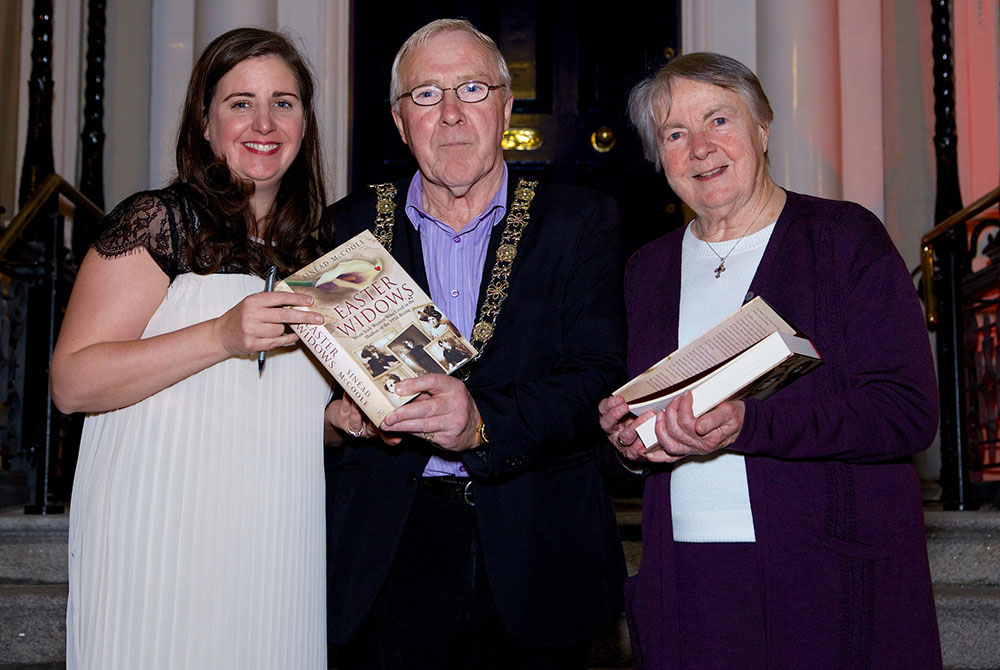 President Michael Higgins led tributes from all sectors of Irish society to the distinguished historian, educator, feminist and human rights activist Sr. Margaret MacCurtain, who died in Dublin on Oct. 5 at the age of 91.

In his statement, the Irish president said the Dominican Sister made "a unique and valuable contribution" to so many aspects of Irish life, past and present. "We owe her a profound debt of gratitude for her advocacy on the abolition of corporal punishment in schools and for the rights of children with special educational needs, and indeed for her academic work in which she highlighted the oft neglected role of women in Irish history," the head of state said Oct. 6.

Margaret Kelleher, professor of Anglo-Irish literature and drama at University College Dublin, where MacCurtain taught for 30 years between 1964 and 1994, described her as "an immensely significant public and private intellectual." Speaking to GSR, Kelleher explained that, as a public intellectual, the Dominican sister was "a courageous and pioneering voice for many who were not adequately or fairly represented in Irish society."

This courage, she said, was evident throughout her campaigning work over many decades, including as an early supporter of the anti-apartheid movement in South Africa, as a voice of opposition to the urban development of an ancient Viking heritage site at Wood Quay in Dublin dating from the ninth century, and the 1995 right to remarry campaign after civil divorce or annulment, of which she was a patron. The referendum in November 1995 saw Ireland overturn its ban on divorce by a very small margin of 50.3% to 49.7%.

"Throughout this activist work, Margaret championed the rights of the individual conscience and the importance of social justice. I also think of her as a private intellectual since she combined that public activism with a deep spiritual life, and we can see this also in her historical writings where she provided a new understanding of women in society with a keen appreciation of, in her own term, women's 'faith-worlds.' "

Addressing mourners at her funeral in Dublin on Oct. 8, Prioress Sr. Elizabeth Healy of the Dominican Sisters of Our Lady of the Rosary and St. Catherine of Siena in Cabra said, "We often say that our sisters are our treasure and how true that is in Margaret's case! A woman who combined a powerful intellect with a warm and outgoing personality; generous and wholehearted in community living, she wore her talents lightly, was looked up to and admired by colleagues, students and sisters alike; a trailblazer and innovator with a strong sense of justice and a deep love and appreciation for Dominican life."

She added that the Dominican ethos and core value of truth was at the very heart of MacCurtain's being and integrity, humility and respect for others. It "shone through in every facet of her life both within community and beyond. She had the capacity to combine her public life with her Dominican vocation and was true to both."

Born in Cork in 1929, Margaret MacCurtain was one of Sean MacCurtain (a school inspector) and Ann McKenna's five children. At University College Cork, MacCurtain was "an outstanding" student, according to historian and writer Sinéad McCoole, author of several books on women in Irish history including Easter Widows, which MacCurtain was adviser and supporter of before she officially launched it in 2014.

Speaking to GSR, McCoole explained that MacCurtain was deeply active in student politics as an undergraduate and held the role of vice president of the student council. At just 20, she was awarded a first-class honors degree in history and English in 1949. She won both the gold medal for the most outstanding student in her year and the Peel Memorial Award, which honors students who have taken their primary degree with first class honors in the minimum time and who have played a distinguished part in the public life of the university.

Her external examiner, J.R.R. Tolkien, the noted author of The Lord of the Rings and The Hobbit, invited MacCurtain to study medieval literature with him at Oxford, but she declined, opting instead to take the higher diploma in education at Cork in preparation for the Dominican novitiate at Kerdiffstown House, County Kildare, in 1950.

After profession, she took the name Sr. Benvenuta and was assigned to Sion Hill, a Dominican school in County Dublin, and taught senior history there from 1956. She was given permission to study for a graduate degree in early modern Irish history at University County Dublin and did her thesis on Dominic O'Daly, the Dominican diplomat who founded the Monastery of Corpo Santo and the Convent of Bom Sucesso in Lisbon. She wrote her dissertation by candlelight as there was no electricity in the sisters' rooms in her convent until later in the 1960s.

MacCurtain examined O'Daly in the wider context of the diplomatic relations between Ireland and Europe in the 17th century for her doctoral thesis. Her research took her to archives in the Vatican, Spain, Portugal and France. She was awarded a doctorate in history from the National University of Ireland in 1963 for her thesis, "An Agent of the Irish Counter-Reformation, Dominic O'Daly." She appeared in a front-page photograph in The Irish Times on Oct. 29, 1963, in her doctoral robes worn over her habit, the first of many media appearances over the course of her life. Kelleher, the professor, said that her favorite media appearance by MacCurtain was her famous statement of support for the 1969 student protests at University College Dublin, which appeared on Irish national television. 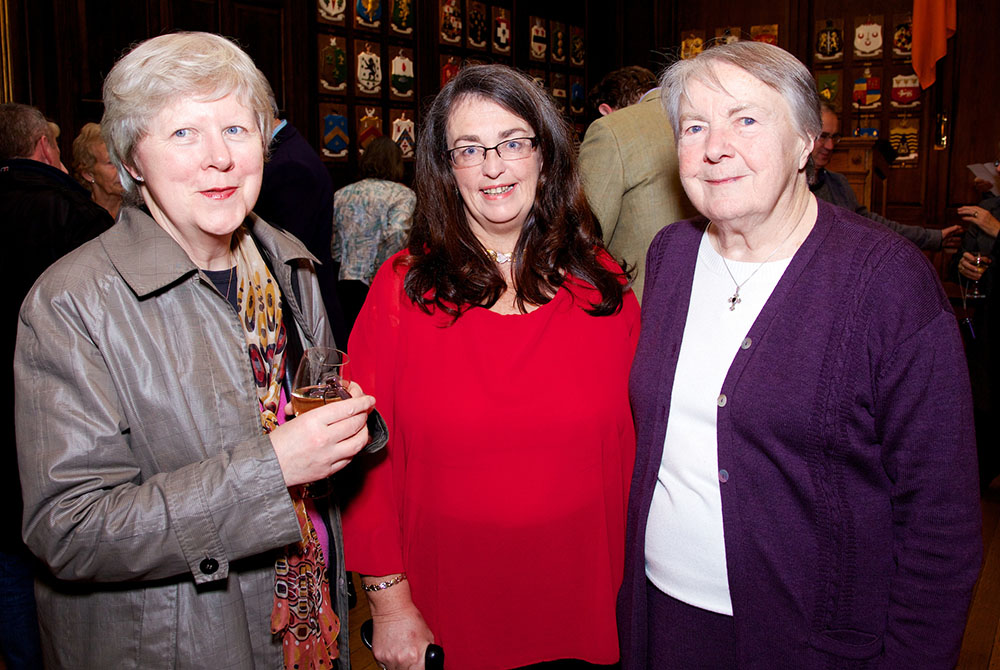 From left to right: Monica Cullinan, Gráinne Blair and Sr. Margaret MacCurtain at the launch of the book "Easter Widows" in 2014. (Lensman Photography/Sinéad McCoole)

In her appreciation, Healy said that if she could pick out one characteristic which marked MacCurtain's life, it was her courage to face difficulties and opposition head on, such as refusing to submit her lecture notes on the Counter-Reformation to then Dublin Archbishop John Charles McQuaid in 1964.

In the view of many, despite her many academic accolades and publications as a historian, her most significant educational contribution was as founding principal of the Senior College in Ballyfermot, Dublin, when she took a career break from UCD from 1980–1983. According to Kelleher, "This college has provided further educational opportunities to generations of students from socially disadvantaged areas and its graduates now include four Oscar nominees in film animation."

In 1971, MacCurtain proposed a women's history course to her colleagues in the history department at UCD. It was rejected. "The Academy, including my own institution University College Dublin, was slow in the 1960s and 1970s to recognize the importance of women's history as a professional subject," Kelleher explained.

MacCurtain produced a series for RTÉ Radio in 1975 to commemorate International Women's Year. She edited the series into a book of essays titled Women in Irish Society: The Historical Dimension, but the collection was refused by major Irish publishers as noncommercial. Catherine Rose of the pioneering feminist press Arlen House accepted the book and it appeared in 1978. It sold more than 10,000 copies, going into three Irish printings and a major North American edition.

Asked in a 1994 interview in History Ireland to name her most significant book, MacCurtain said Women in Irish Society because it demonstrated the "intellectual and creative energy of the 1970s." That decade began for MacCurtain with the student revolution of 1969–70 and ended with her involvement in the protests at Wood Quay in the late 70s against Dublin Corporation's proposal to erect city council offices over the remains of one of the most significant Viking settlements outside of Scandinavia. An archaeological dig of the site had uncovered evidence of the Vikings of the ninth and tenth centuries. But despite protests which drew up to 20,000 people on to the streets of the Irish capital in September 1978, the construction of the offices went ahead and priceless history was lost.

"She was a feminist and a pioneer of women's history and played no small part in 'writing women into Irish history,' " Healy stressed, using the title of a publication of MacCurtain to describe her work. Alan Hayes, who has run Arlen House for 20 years, told GSR that MacCurtain had a 45-year history with the publishing house and was one of its patrons when he relaunched it in 2000. He highlighted MacCurtain's pivotal role in promoting the very first anthology of Irish women's writing, The Wall Reader in 1979. It was edited by Irish poet and author Eavan Boland, who was professor at Stanford University. According to Hayes, "The current flourishing of Irish women writers starts in the reclamation work and the revolutionary work that Eavan Boland, Catherine Rose and Margaret MacCurtain did in the '70s and '80s."

MacCurtain played a key role in editing and producing Volumes IV and V of the comprehensive and wide-ranging Field Day Anthology of Irish Writing which aimed to address complaints over the deficit of women's texts in Volumes I to III, which were edited by writer and academic Seamus Deane. In Kelleher's opinion, MacCurtain's determination "to restore the individual to history" was achieved in monumental form by her contribution and role in the Field Day Anthology of Irish Women's Writings (2002) which showcased her "astonishing range of knowledge and interests."

Retirement from UCD in 1994 brought new challenges. She was the Baldwin Scholar in the College of Notre Dame of Maryland (Baltimore) in spring 1995. When she returned to Ireland, she was a member of the Coimisiún ar Eagraíochtaí Deonacha na Gaeilge, a ministerial commission to advise on the Irish language. She chaired the National Library of Ireland Society for four years after her return from Baltimore. In 1997, she was named to a five-year term as chair of the National Archives Advisory Council.

Recollecting MacCurtain's pivotal role in helping so many people in the educational and creative fields, McCoole told GSR, "She always kept her moral compass in terms of championing causes that were right and she was willing to stand up to authority for causes such as equal pay for women, apartheid and divorce. She was writing history while being involved in history."