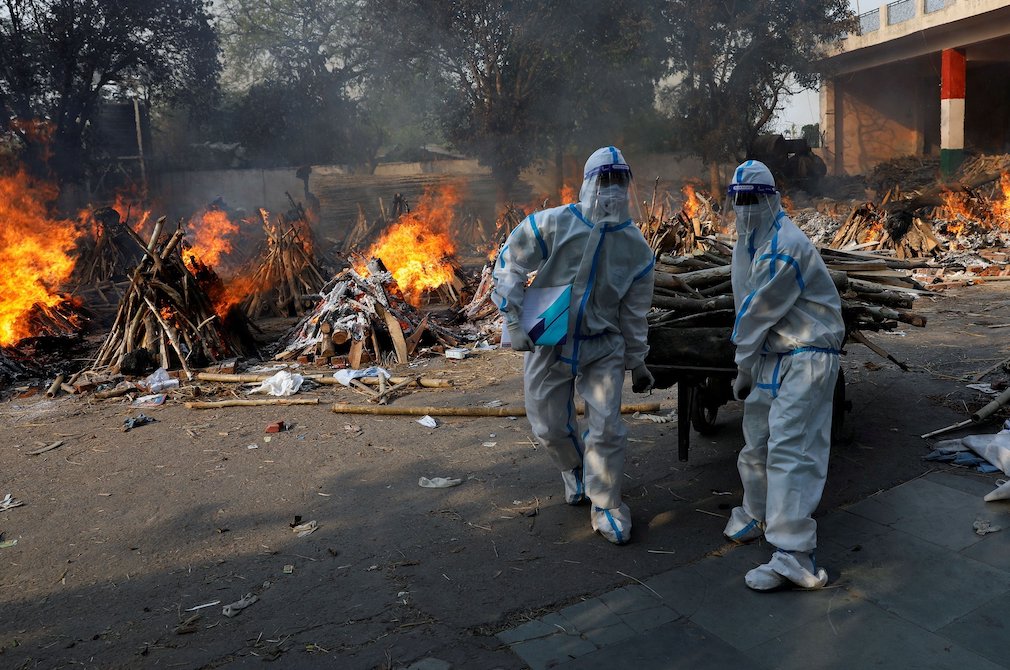 India is leading the world in the number of coronavirus infections. On May 2, Reuters reported that India's new daily COVID-19 cases passed 400,000 for the first time, as the second wave worsened. Reuters reported May 6 with information from India's Health Ministry that a "record 412,262 new cases and 3,980 deaths were reported over the past 24 hours, taking total infections past 21 million and the overall death toll to 230,168."

Almost everyone I know is affected by the second wave in one way or the other. Some are infected, some have lost (or fear losing) a family or a community member, a friend, a neighbor, a colleague. Most are living in isolation, unable to express apprehension and anxiety, unable to go out and do something.

I and most sisters in my community had the virus the first week of April, and we had to isolate ourselves immediately. Our normal life abruptly came to an end.

I had a fever, coldness, cough, throat pain, chest pain, conjunctivitis, dizziness, diarrhea, and worst of all, a painful headache that persists. Around day 13, I felt most of the symptoms were gone except for the bouts of headache. Then unexpectedly I developed vomiting, night sweats, mild breathlessness, fatigue. And my case was considered mild COVID-19!

On day 20, I tested negative and the cause of the persistent headache was determined to be COVID-19. I am under treatment. It prepared me to embrace the new normal.

But what has caused me the most heartache has been the death of hundreds of thousands of innocent citizens of my beloved country. As I write this, my eyes are full of tears.

Unceasing death, overflowing crematoriums, unending pyres burning thousands of bodies; hospitals with no beds or oximeters and with insufficient oxygen, medicines, testing tools and personal protective equipment; medical staff at the breaking point; and on and on. 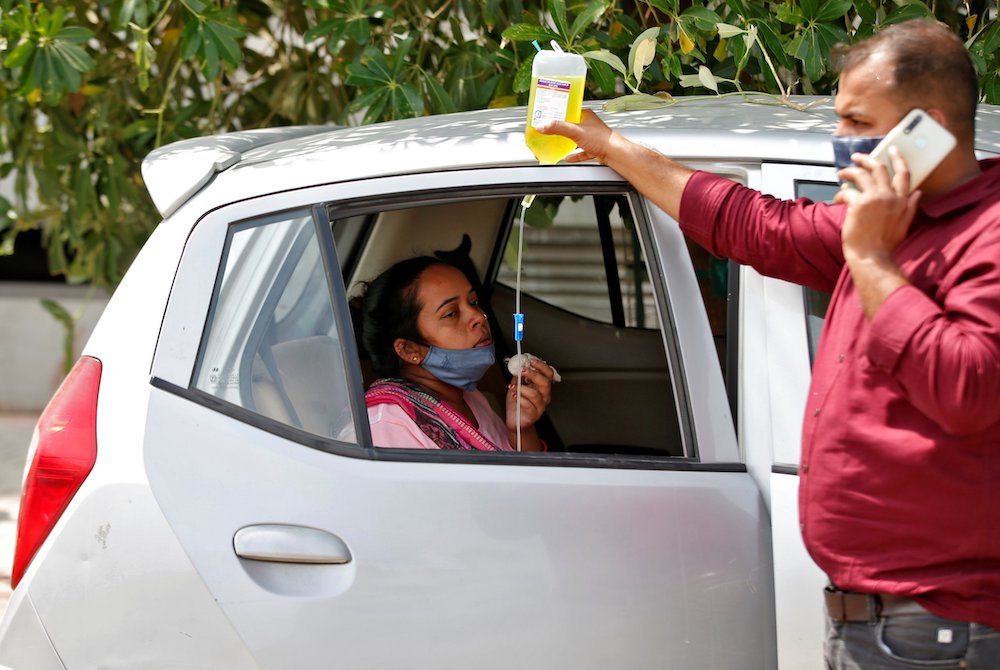 A relative holds a bottle of intravenous medicine being administered to a COVID-19 patient waiting to enter a hospital for treatment in Ahmedabad, India, April 26, 2021. (CNS/Reuters/Amit Dave)

According to The Week Magazine, 165 Indian journalists have lost their lives to COVID-19 so far. And NDTV reported on the suicide of a doctor in Delhi Hospital's COVID-19 ward.

Though I have received little information from nuns, on the basis of my WhatsApp communication, I estimate that over a hundred priests and nuns have died of COVID-19. And on May 4, Emeritus Archbishop Anthony Anandarayar of Pondicherry and Cuddalore died, the first Bishop in India to die of COVID-19. Then, Bishop Basil Bhuriya of Jhabua-Indore Diocese and emeritus Bishop Nirmal Minz of the Protestant North Western Gossner Evangelical Lutheran Church died on May 6.

So, India failed miserably to contain coronavirus for the second time! The first failure began on March 24, 2020, when Prime Minister Narendra Modi within four hours of notice, announced a 21-day national lockdown as the death toll from COVID-19 rose to 12, with 500 infected. The mass exodus resulting from this unwise decision caused immense suffering for migrant laborers.

What caused this second tragedy?

India is a vast, diverse, complex country, difficult for any government to run — even more complicated in a pandemic. Most of us started behaving as if the virus were gone. People were overconfident about their immunity.

However, there is a national consensus by prominent lawyers, journalists, commentators, activists and citizens that India's federal government and critical institutions were principally responsible for the mishandling of this second wave.

In an interview with The Wire, noted lawyer Dushyant Dave accused India's critical institutions of letting the country down during the present COVID-19 crisis.

The prime minister — a hardworking, high-tech and determined leader, I think — could have prepared better for the pandemic. He could have better coordinated vaccine production with world leaders — because India has the greatest capacity for manufacturing vaccines. The government could disseminate information and discharge duties to different departments.

The Modi government could have canceled or postponed the two mega-events; an election rally and Kumbh Mela (a Hindu festival where pilgrims bathe in the waters of the Ganges and Jumna rivers, at four locations in India) with millions of mask-less crowds that served as super-spreader events for coronavirus. The ruling party was obsessed with winning in the West Bengal election and maintaining its religious profiling; but the people of Bengal let them down badly!

Across the country, state governments are responsible for the health care of their citizens. They could have done more testing and kept better records of data — so the states also failed.

The election commission should have played a bigger role at the national level to contain the virus by ensuring that the elections were postponed or held virtually.

The Supreme Court could have used certain powers (suo moto and Public Interest Litigation) but has been a silent spectator for the past weeks.

Reflecting on this, I am struck by three things in particular. First, the intensity of my prayer. Second, the frustrations I have experienced, and third (the finest) Pope Francis' latest book, Let us Dream: The Path to a Better Future.

The beloved leader of over one billion Catholics sees the growing economic inequality, social injustice, individualism, hunger, and poverty exposed more intensely than ever in the COVID-19 crisis. He also sees that the resilience, fraternity, generosity and creativity of many people are the way to restore our society, our economy and our Earth.

The pope offers a moving and workable plan for building a better world for all humanity by putting the poor and the earth at the center of new thinking, which can be used by Christians and non-Christians all over the world. The Jesuit pope uses "see-judge-act" as the foundational pastoral approach. In brief, he proposes three concrete models as a solution to a crisis like COVID-19.

The pandemic has taken so much away from us. But it has also allowed us to come together as one humanity, to work and grow together in love and solidarity.

First, a maternal economy, an economy that sustains, protects, generates and promotes just like a mother manages a home: the weakest have the most care, the other are equally treated, and girl children are given attention. It is a positive promotion of God's chosen people — the ones on the periphery.

Second, a "doughnut economy," a distributive economy that moves people out of the "hole" — everyone should be in the circle and have an equal opportunity to grow.

Third, recognition of the values and integration of the fresh thinking that women are bringing to this moment. The fact that countries with women leaders have on the whole contained the coronavirus effectively — must be the Spirit prompting us to look at this approach, he says.

In these, the pope calls world leaders to take inspiration from Jesus's parable of the good Samaritan, which shows how we can develop our lives, our calling and mission.

Significantly, U.S. President Joe Biden, in his first speech to a joint session of Congress, rejected the theory of trickle-down economy — as does the pope — and spells out a new policy for America!

The pandemic has taken so much away from us. But it has also allowed us to come together as one humanity, to work and grow together in love and solidarity. Hope springs up in me as over 40 countries assist India in its battle against COVID-19's second wave. It is high time for India to acknowledge this worldwide support and recommit to working together as one global family.

In these depressing times, I hear heart-breaking news each day — checking on communities, families and friends, counseling with isolated patients, sharing the personal experience of being a COVID-19 patient, helping people observe the symptoms, praying for grieving families, talking with the migrants who need information — all of these have brought me as much hope as it has them.

Special thanks to my sisters, friends from all over the world (including from Global Sisters Report), family, acquaintances, and some fellow COVID-19 survivors for pouring out your love, and prayers, and quietly reaching out to check on me every day and guide me through this. To Sister Vandana, who cared for us with food and medicines, and helped during our recovery. Your hand-holding and encouragement is invaluable!

Together, let us dream for a better world! 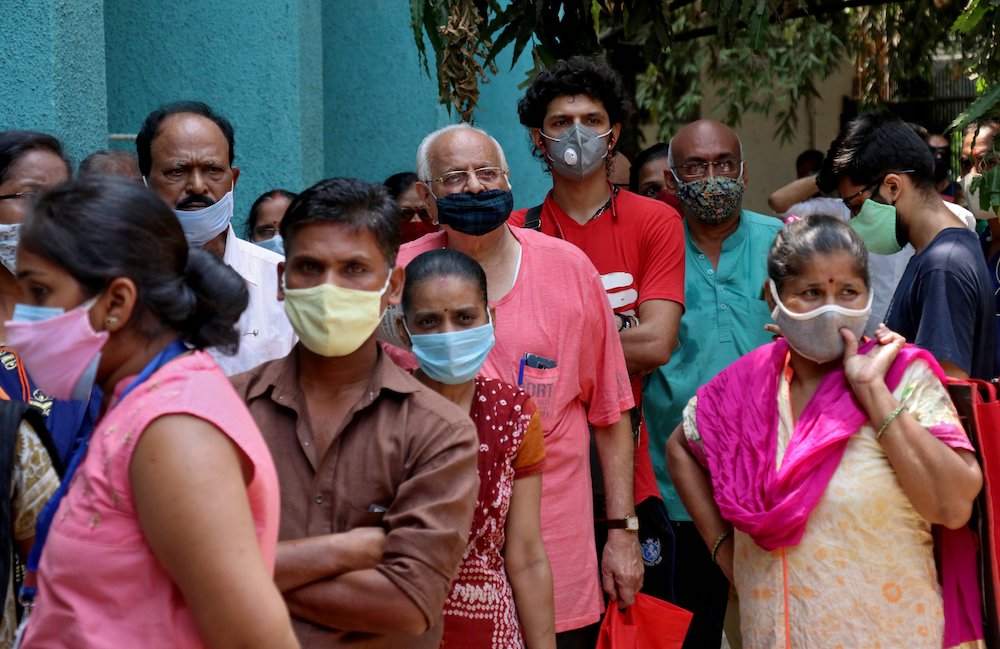