Sisters to march in support of climate change solutions 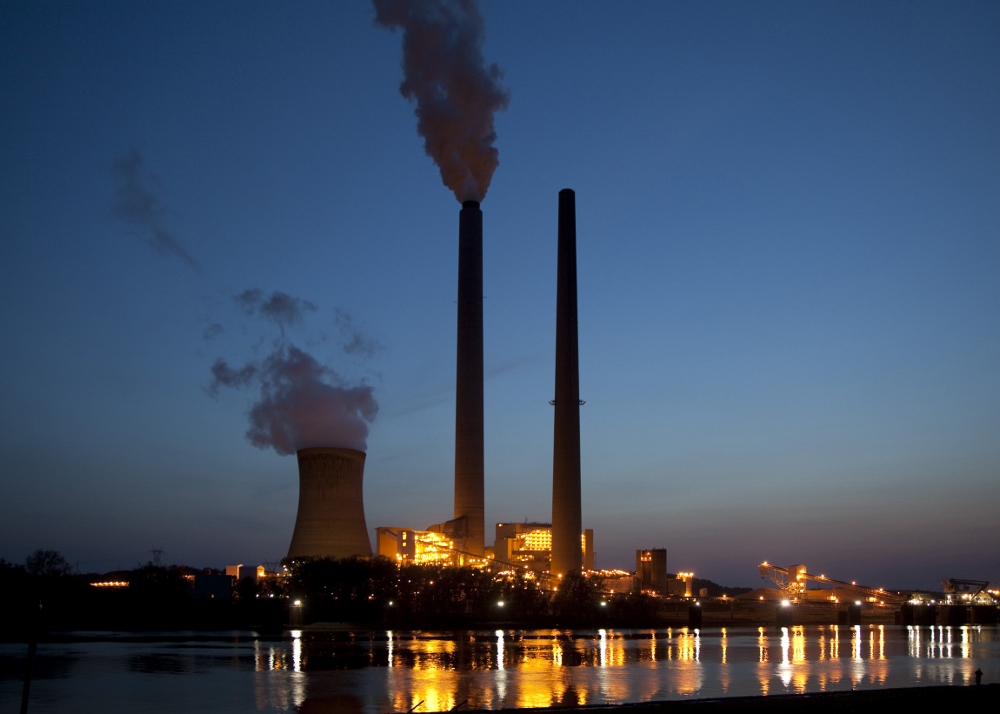 Smoke from the American Electric Power's coal-fired Mountaineer Power Plant, along the banks of the Ohio River in New Haven, W.Va., is seen in this file photo. In May Archbishop Thomas G. Wenski of Miami urged the head of the Environmental Protection Agency to craft rules limiting pollution that respect human life and dignity as the agency addresses concerns that power plants are a major contributor to climate change through carbon emissions. (CNS photo/Jim West)

During a crush of events in New York September 19-28, religious congregations will join a throaty and growing chorus of voices raised in support of an anticipated 2015 global agreement on climate change mitigation. Hundreds of thousands of people are expected to demonstrate, discuss and pray for bold action by participants in the United Nations Climate Summit on Sept. 23. U.N. Secretary-General Ban Ki-moon invited governments and private-sector representatives to the ambitious summit for an early opportunity to commit to substantial, replicable, concrete actions to reduce carbon emissions.

“We want to show world leaders in town for the summit that there’s strong support for action to come up with a global solution,” Patrick Carolan, executive director of Franciscan Action Network, said.

“We’re in the midst of a mass extinction event and climate change is a contributing factor,” said Sr. Mary Pendergast, who is ecology director for the Northeast Community of Sisters of Mercy.

Her group is one of more than 850 sponsors of the week’s signature event, the People’s Climate March. Organizers describe it as “the largest climate march in history” and estimate 200,000 to 700,000 people will participate in the Sept. 21 walk on the west side of Manhattan. Thousands more will connect to the effort through prayer and awareness activities. Catholic groups have organized, or will participate in, interfaith programs throughout the week.

“Climate change is a moral issue and we need moral solutions,” Carolan said. “We can no longer debate the science of climate change. It’s real. Ninety-five percent of scientists acknowledge it. Popes Benedict and John Paul II issued statements about it and Pope Francis is writing an encyclical on this.

“For Catholics, the discussion shouldn’t be about whether climate change is real, but what we can do about it. People who deny climate change are denying their Catholic faith.”

This month’s events are prelude to the U.N. Framework Convention on Climate Change scheduled for December 2015 in Paris. The convention is expected to negotiate a legally binding international agreement on carbon emissions.

Religious congregations that have long spoken out about climate change and prioritized it for study and activism welcomed the summit and related activities.

Dominican Sr. Arlene Flaherty said, “Sisters have been weaving advocacy with contemplative life and direct service and have been at the forefront” of environmental awareness and justice. Flaherty is the director of Justice, Peace and Integrity of Creation Office for the School Sisters of Notre Dame and a justice promoter for the Dominican Sisters.

“We are giving voice to the pleas and cries of the earth, and to beg for mercy and intervention,” she said. “The climate march is not just an act – it’s also a prayer, a response to, and an engagement with, the self-disclosure of God’s presence. Our sisters work around the world to restore earth’s systems and bring attention to right relationships with the earth. More deeply, we’re trying to integrate the theology of creation. We’re not just stewards.”

The Sisters of Mercy are among congregations that have included climate change in their direction statement. Pendergast said members of the Northeast Community have made a personal commitment to reduce their carbon footprint and “be more aware of who is under our footprint.”

Climate awareness is growing in small and large ways.

“I’ve been uplifted because more and more sisters are expressing they see the interconnectedness between migration, poverty, the undocumented and climate change and how it’s connected to our lifestyle and our vows,” said Sr. Carol DeAngelo. She is the director of Peace, Justice and Integrity of Creation for the Sisters of Charity of New York. 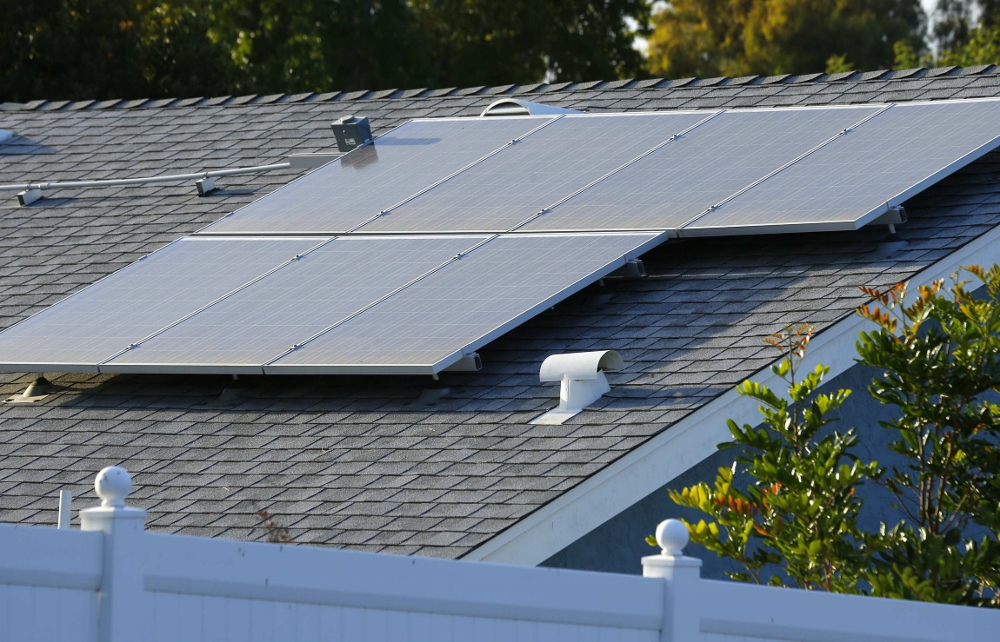 Solar panels like this one seen in 2013 on a house in San Marcos, Calif., are key to a new program in Diocese of Stockton, Calif. Diocesan officials have teamed with a solar energy firm and the Catholic Climate Covenant to offer members of three parishes a chance to save on their electricity bill and raise funds for their parishes and local Catholic Charities programs. (CNS photo/Mike Blake, Reuters)

“Climate change is no longer the concern of industrial and government leaders, but now has a broader base of concern,” said Sr. Didi Madden, who is promoter of Justice, Peace and Integrity of Creation of the Dominican Sisters in Committed Collaboration.

“It has been at the macro level of policy, industrial profits and treatises,” she continued, “but the patterns of climate change are being driven by human industry and are affecting us. It involves us in our everyday life and we want to part of the conversation.”

“The march is about opening the door to a wider base of understanding among the people we minister to. It’s a conversation that challenges us to put our bodies where our concerns are and treat the issue as more than an intellectual exercise,” Madden said.

Sisters anticipated robust participation in the climate summit events by their members and student affiliates. Pendergast said they plan to send two busloads of people to the march, including students from Georgian Court University in Lakewood, N.J. “We have the educational resources and influence to speak about the immense suffering that is going on in creation.”

Several sisters said the march would be both action and prayer, in recognition of the physical limitations of some of their older members who have adopted new ways to live the Gospel. D’Angelo said in addition to letter-writing, emailing and advocacy, sisters who can’t march have received an “armchair ritual” to unite them with the movement.

Expectations for the march are high. Sr. Caroljean Willie, Sisters of Charity Federation NGO representative at U.N., said, “My greatest hope is that it will be a wake-up call for citizens everywhere about he seriousness of the issue and also a wake-up call for our government leaders.”

Flaherty hoped the scale of the march would encourage global leaders to “get about the business of healing the earth” and be a call to consciousness for individuals.

“Also I hope it will be fun,” she laughed. “There’s something about the magic of people’s creativity, in the music they make and the clothes they wear. Even in a serious situation, the spirit can soar. I hope it will be a deeply spiritual and energizing experience that will help us go forward,” Flaherty said.

Franciscan Action Network will participate in an interfaith “Religions for the Earth” conference at Union Theological Seminary September 19-21 and Carolan will speak at 9:30 a.m. Mass for participants at St. Columba Church on West 25th Street the morning of the People’s March. Pastor Fr. Keith Fennessy will address climate change in his homily.

Updated information on the U.N. Climate Summit, the People’s Climate March and related events is available at www.un.org/climatechange/climate-summit-2014/ and www.peoplesclimate.org/march/.

[Beth Griffin is a freelance journalist based in Rye, N.Y.]

Related - Why I'm going to the People's Climate March by Patricia Siemen.

Environment | Sisters to march in support of climate change solutions

The Egg and I: Dominican community celebrates Mother Earth