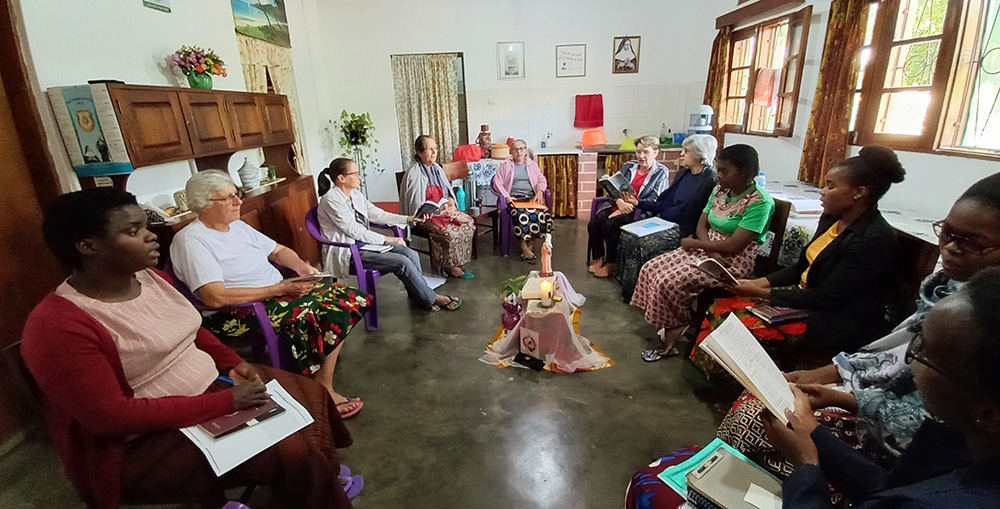 Members of the Immaculate Heart of Mary Congregation pray together. (Courtesy of Rita Schneider)

In June and July, two sisters in my community — Luciane Terezinha Piovesan, training counselor, and me, missionary animation counselor — had the privilege of visiting our Immaculate Heart of Mary Congregation communities in Angola and Mozambique. I learned that Africa is the second-largest continent in the world, bathed by the Atlantic and Indian Oceans and the Mediterranean and Red Seas.

As Brazilians, we know that the history of Mother Africa and the history of Brazil are closely linked and that we are fruits of the meeting of the diversity of Amerindian, European and African ethnic groups. In the colonial period, enslaved Africans were brought to Brazil to work in sugar production and later in coffee, contributing their dances, cuisine, religious rituals and customs to the consolidation of the Brazilian culture. 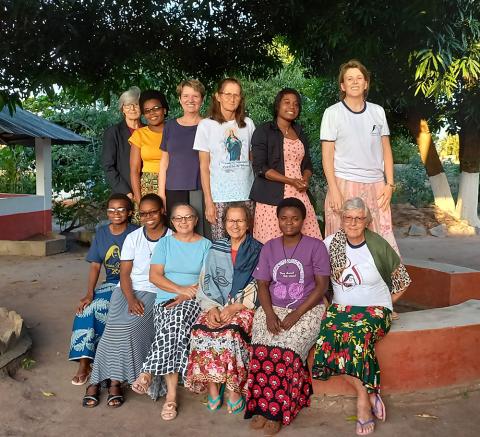 We can see and feel this richness of diversity of ethnicities, traditions, religions and languages. In addition to the thousands of African languages, Brazilians speak the languages their colonizers brought, such as our Portuguese language from Portugal, which is officially spoken in six African countries: Angola, Mozambique, Cape Verde, Guinea-Bissau, São Tomé and Príncipe, and, recently, Equatorial Guinea.

The "vibe" that breaks out of this culture is fascinating and contagious, especially in the festivals, the celebrations of faith, and welcome ceremonies for visitors. Amid drums, dances, chants and hisses, and dressed in multi-colored capulanas, the people offer what is richest and necessary in their lives, the products grown by hand in their small machambas: chicken, peanuts, rice, cassava, pumpkin, banana, yams.

We learned that the economy of the vast majority of the people in the countries we saw is primary and basic to survival despite the enormous wealth of the African continent in minerals such as uranium, gold and diamonds, oil and natural gas. Unfortunately, large European and American companies exploit these natural resources with the connivance of corrupt and unscrupulous local leaders, inflicting pain on their people. As in Brazil, it is a shame, an injustice and an incomprehensible crime that abundance in so-called modern societies coexist with the only thing that should never be missing: the daily bread.

The sisters in Nampula took us to visit a refugee camp in Cabo Delgado, one of the provinces of northern Mozambique, home to about 700,000 people who were forced to leave their villages when armed Islamic groups looted them and set them on fire. They fled with only the clothes on their bodies to the bush, where they spent several days walking and hiding without access to water or food. Many were killed or are missing. The resettlement camps, like the one I saw in Corrane, are overcrowded, and people live in conditions of extreme poverty.

In our wanderings in Angola and Mozambique, in addition to studying, praying and living with the sisters, we had meetings with aspirants; with the coordinators of Alcoholics Anonymous groups; and with the construction staff and those who benefited from the houses, wells and water cisterns. We did vocation work with the laity and visited parishes, communities, institutions and other partners. And we saw all the missions and uplifting work that the sisters carry out in health, pastoral care, education and special projects. There, each sister gives her all, bravely honoring the charism of our founder, Bárbara Maix, walking in the mission of love, committed to all, especially, to the poorest.

We concluded our mission pilgrimage with a regional assembly and an annual retreat guided by two of our sisters.

Today, when we hear about Chalaua, Nampula, Maputo and Quelimane in Mozambique and M'banza Congo in Angola, our memories are vivid because our eyes have seen and our ears have heard. We are immensely grateful to our Province of Mary Mother of God, who entrusted this mission to us, and to all the sisters for the warm welcome and for being the presence and witness of our congregation on this "forgotten" continent, our Mother Africa. With you, sisters, the province and the whole congregation are present.