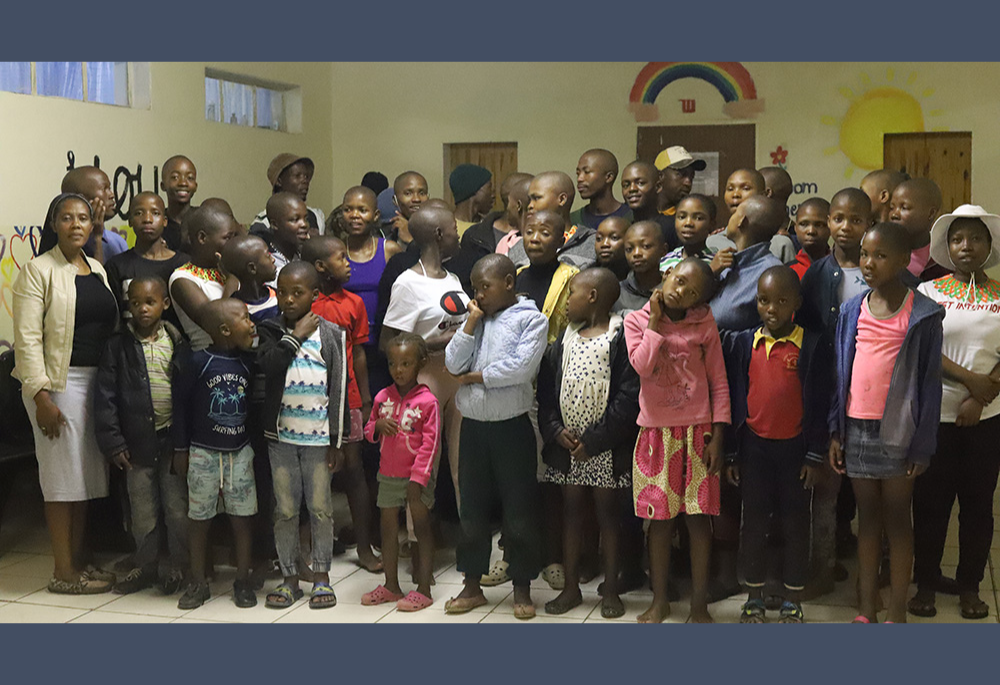 Sr. Eusebia Maselitso Lerotholi, a member of Handmaids of Christ the Priest, with the children at Andrew Blais Orphanage Home. Lerotholi founded the orphanage in 2013 to help homeless and orphaned children have a home and access to education. (GSR photo/Doreen Ajiambo)

Sr. Eusebia Maselitso Lerotholi strongly believes God called her to serve the poor and the vulnerable. As a trained pastoral caregiver and counselor, her ministry has evolved into being the mother of many through the Andrew Blais Orphanage Home in Motsekuoa, a small town 27 miles south of Maseru, Lesotho's capital.

Lerotholi, a member of the Handmaids of Christ the Priest, founded the orphanage in 2013 after an emotional encounter with one of the workers at the hospital where she was a health counselor.

"I met one guy working as a cleaner for the clinic. The boy was 17 years old, and he told me that he was staying with his grandmother and taking care of his entire family of six after the mother passed away and the father left for South Africa, never to return," she said. "His story really challenged me to think about what I could do to help him, and that's how I started the orphanage."

The home recruits children between the ages of 4 and 21 and is currently home to 52 children. Most have been abandoned by their parents, who left the small mountainous southern African country to seek jobs in neighboring countries, especially South Africa, which surrounds Lesotho. Others are orphans who have no one to look after them, while some depend on their aging grandparents.

Lerotholi said children in such a situation end up on the streets and are exposed to sexual harassment, violence, abuse and exploitation. She noted that the home rescues the children and give them a chance to start a new and better life.

The World Bank classifies Lesotho as "a lower-middle-income country," with a poverty rate of 36% in 2021. The country's unemployment rate, which was 24.6% in 2021, is projected to remain high because of the effects of the COVID-19 pandemic on the country's population of 2.2 million.

"Our country is poor," Lerotholi said. "Therefore, most people migrate to South Africa, leaving children behind. As a result, most of these children have nowhere to go and end up dropping out of school. I do not know who tells people that grass is always greener on the other side." 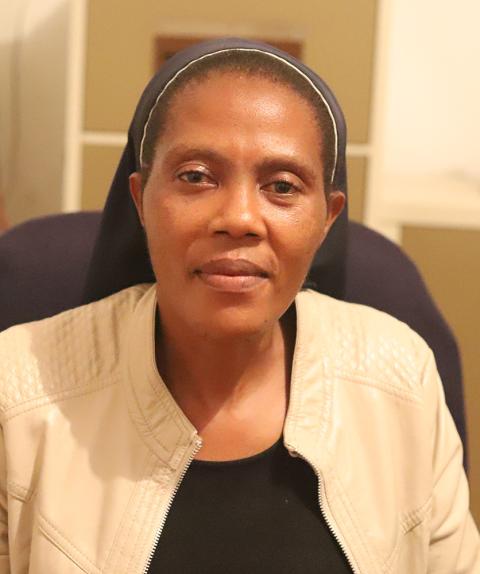 Lerotholi said the migration of parents to neighboring countries to look for jobs had increased the number of street children in the country. Government social workers, police, and local leaders bring dozens of children to her home daily, but she doesn't have enough resources to accommodate them. She is only able to take one child every two months on average.

Despite the challenges, she says she has achieved a lot.

"Hundreds of children have gone through this orphanage so far," she said. "We have some of our children who are in various universities and colleges. Others have opened their own businesses and can take care of themselves while others went back to their homes and are doing nothing, which is quite heartbreaking. Seeing those doing well in life gives me immense joy."

GSR: What are some qualifications for a child to be admitted to your orphanage?

Lerotholi: Any vulnerable child is welcome to stay here, especially those children going through hardships and even abuse. We also take children whose parents have died and whose relatives are no longer caring for them. Abandoned children are also welcome here because in Lesotho, some parents abandon their children and go to neighboring countries to look for jobs.

We accommodate children from 4 years old until they are through with school, especially college levels for those who can study. For those who do not do well in school, we enroll them in vocational courses to learn hands-on skills like farming, plumbing, hairdressing, baking and dressmaking. These skills are to help them live a self-sustained life.

Sometimes we allow other siblings to join the children so they are taken care of by family.

What are some of the challenges you experience?

The main challenges are education and funds. At the orphanage, we don't have a school. This means the children have to go to other schools. Despite education being free at primary levels, the administration usually requires certain amounts of money. For other parents, they have maybe one or two children they pay fees for, but for me, it will mean I have to pay the required amount for like 20 children, which is very expensive with limited resources.

Feeding the children here is also not easy. We solely depend on well-wishers. This makes our source of income very limited.

There was a time I employed a person to help me run the orphanage, and he turned out to be a fraudster. He squandered all the money sent by donors and even stole the laptops donated to the orphanage. The donor opened a case against me in a court of law. People pointed fingers at me when I stood in court to defend myself. I had nobody to advocate for me. It was challenging, but I had to face the judges.

That was a tough time for me. After a year of in-and-out-of-court procedure, the case was closed for lack of evidence. However, since then, the number of donors has gone down. That was last year in June.

This was the time I felt like maybe I should close down. But the look on these children's faces stopped me.

What was your worst moment?

There was a time a 7-year-old child went missing for two days. We kept looking for her to no avail. On the third day, she was found in our dam here, dead. I was in the hospital at the time working as a pastoral counselor for the patients when I received a call to go and attend to the incident.

When I saw her body, I was devastated. To make matters worse, she had been transferred from another orphanage to come here so she could get the best care but ended up dying. It was the first year of this orphanage, and this incident made me question whether I had done the right thing by opening this orphanage.

How did COVID-19 affect you or your ministry?

The challenges skyrocketed. The number of donors went down, and the number of children increased. I received 10 children between mid-2020 and mid-2021. The children were also not in school, and feeding them was a big problem. The space here is also limited, and they are many.

In early February last year, one tested positive for COVID-19, a challenge for us. We had no isolation room for him, so 11 of them who were sharing the room with him got infected. It was a hectic time. With limited resources for protection and space, we had to remove those who were not infected and put them into other rooms. It was a tough time. 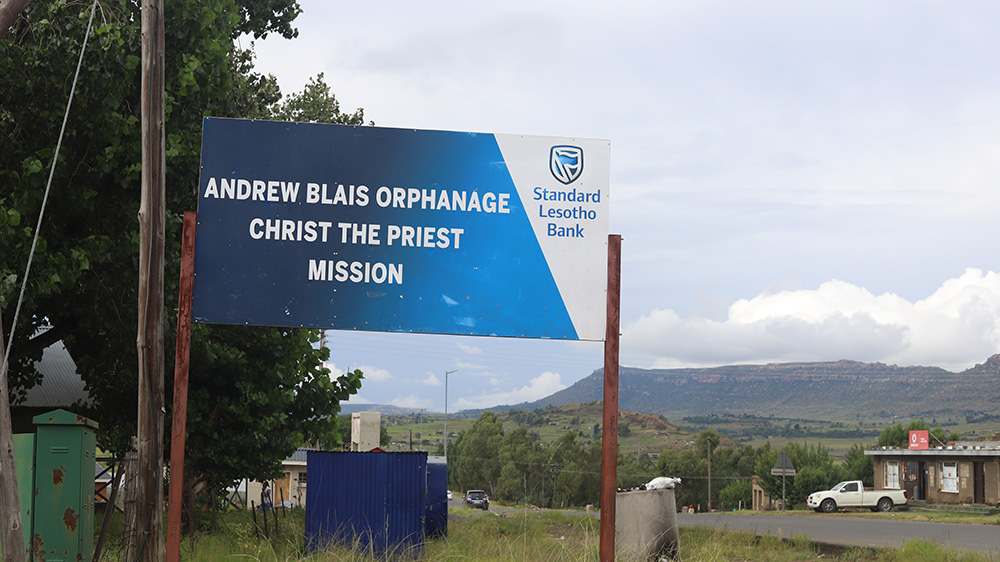 You reintegrate the children with their families when they reach 18. How is this done since some of them are orphans?

Most of the children here have extended families. Once we see the child has attained 18 years of age and can take care of themselves, we reunite them with their families and assist from there. We have a program where the family members take them home, especially during holidays when schools have closed, to stay with them because we believe family is essential. We want them to grow up appreciating family.

At the orphanage, we have activities that teach them to be responsible. We engage them in farming, especially poultry farming, where we rear chickens and sell eggs. We also have dairy cows that give us milk for food and a source of income. These children learn both farming and business, which are skills that prepare them to face the world.

How do you see the Holy Spirit working in this ministry?

There are situations where you need God's intervention as a religious. There are some serious challenges I have gone through, but with the help of the Holy Spirit, God gave me the solutions. Sometimes I wake up in the morning and don't even know what to feed the children, but we pray, and God provides.