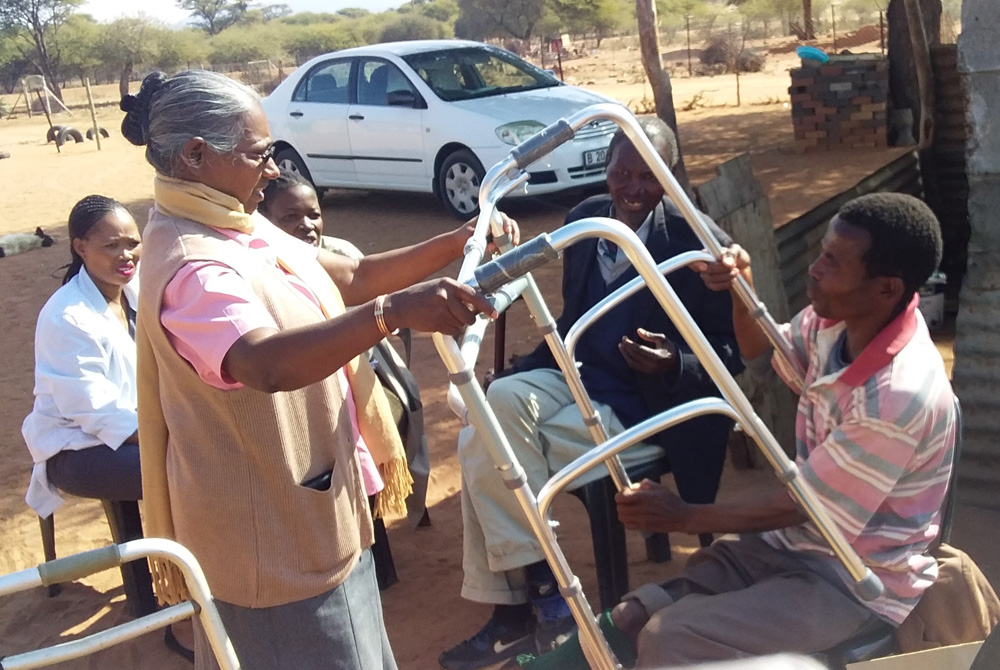 Sr. Vinaya Chalil presents Oliver (not his real name), one of her patients, with a new walker, as friends and careworkers watch. (Rumbi Chakamba)

It is a cold morning in the quiet village of Metsimotlhabe, in southeast Botswana. Most of the residents here are preparing to make the 12-mile work commute into the capital city of Gaborone. A 68-year-old pensioner, Mathew (not his real name), is also up, despite having been retired for the last three years. He has been woken by pain from an infection on his right leg.

Under normal circumstances Mathew would have to walk for more than a mile from his home to the local clinic to have the wound treated. However, as part of the Pabalelong Hospice homecare program, he is relieved that he just has to wait for a visit from the sisters or caregivers who treat him regularly.

"I don't think I could have walked to the clinic today, it is very painful," he says rubbing his wound. "I have also run out of bandages so I am really happy you have come to see me today," he tells his caregivers.

Pabalelong is a 10-bed inpatient facility based in Metsimotlhabe. It provides accessible, quality, 24-hour, palliative care services to patients throughout the country as well as home-based care to nearly 90 patients living within the four villages near the hospice. Mathew is one of their home-based care patients.

The hospice is owned by the diocese of Gaborone and is administered by two sisters from the Sisters of Charity of Nazareth, Srs. Vinaya Chalil and Sunila Erumangalathu. 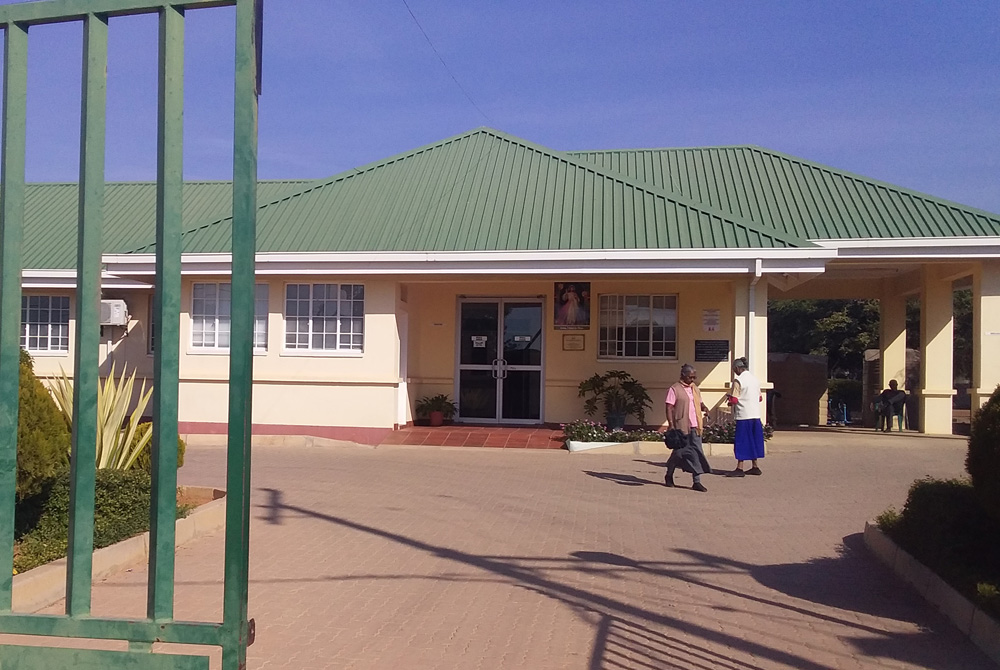 On this morning, Chalil has accompanied the home-based care team to visit Mathew. He has an undiagnosed infection on his leg and his doctors have recommended an amputation to stop the infection from spreading. However, he is reluctant to give the go-ahead as he fears that his life will be unbearable without a limb.

"I am afraid because I do not know what it will be like and how people will look at me," he explains.

Chalil has arranged for him to meet with one of the hospice's former patients, Oliver (not his real name), a 45-year-old former construction worker whose leg was amputated in 2018. She hopes that Oliver will be able to allay Mathew's fears about life after amputation.

"When I tell him that he will be able to do all the things he can do now, he does not believe me," explains Chalil. "So I thought it best for him to meet someone who has had a similar experience. That way he can see for himself that life does go on."

Chalil is a social worker by profession. She first came to Botswana in 2004 where she joined five other Sisters of Charity who had come to the country in 2000 when then Bishop Boniface Setlalekgosi invited them to assist with the HIV and AIDS epidemic.

Today she is one of seven Sisters of Charity of Nazareth serving in the country. They work in three communities in the southern part of Botswana — Metsimotlhabe (at the hospice), Kanye and Lobatse.

She describes her first impressions of the country as a cultural and religious shock compared with what she had grown up with in India. 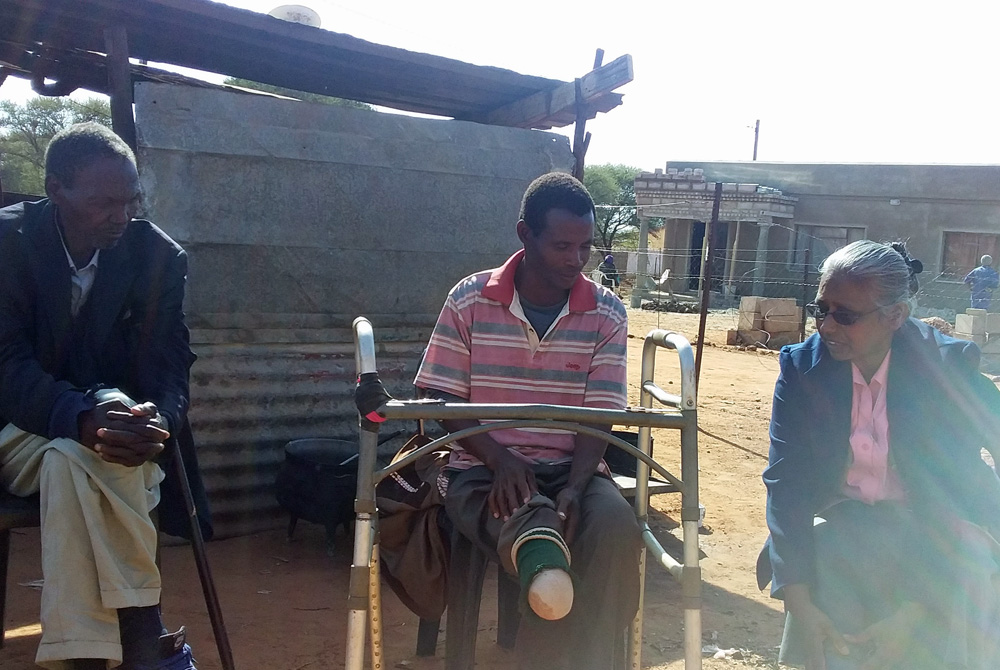 Sr. Vinaya Chalil sits alongside her patients, Mathew and Oliver (not their real names), as Oliver tells the story of his amputation. (Rumbi Chakamba)

"What I found different was the spirituality because African spirituality is very vocal. It centers on praise and worship, whereas Indian spirituality is more meditative and quiet. In addition, the lifestyle of the people also shocked me, especially the number of single mothers and children outside of marriage, because Indian culture is centred on the family bond and marriage. That is a bit different here," she said.

Despite these differences, she soon found herself an integral part of the community and was given the name "Sister Bonolo" (the Setswana translation of her name meaning "humble and modest") and began her work assisting those infected by HIV and other life-threatening illnesses.

"We initially set out to establish a preschool but ended up starting an outreach program for those with HIV and other chronic illnesses in 2004," she recalled.

During their outreach meetings, the sisters would gather patients in different villages and conduct checkups, prayers, praise and worship, and some tai-chi exercises before sharing a meal with the patients.

They found that such meetings helped to lift spirits and positivity amongst the ill.

"We found that people who were part of the program lived longer as compared to those that refused to take part," said Chalil.

This outreach program ran from 2004 to 2009 and set the foundation for the Pabalelong Hospice.

In 2009 the sisters realized that, though they were assisting nearly 300 patients through their outreach program, many of those who needed their help were bedridden and unable to attend such meetings.

"We found that a lot of people were too sick to attend the outreach meetings. We also found that these people were usually left alone at home because their caregiver had to work. So many of them would be locked in an empty house or left at home with a young child or elderly person who could not look after them properly," said Chalil. 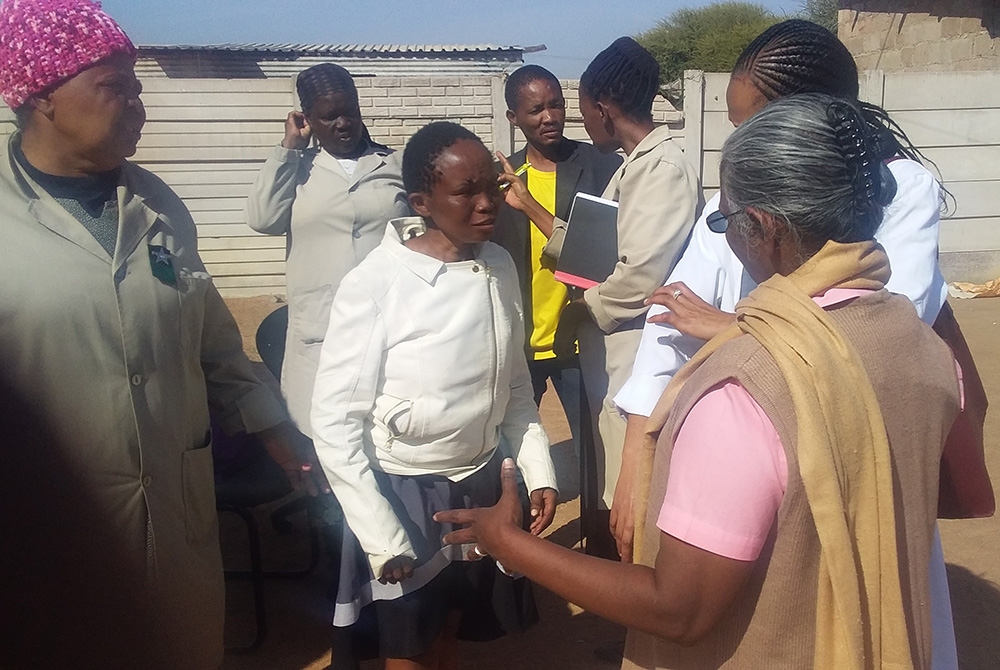 To cater to these people, they approached the Gaborone Diocese to establish a hospice.

The hospice was launched in 2010 and named Pabalelong, meaning "place of love and care." It offers spiritual and medical care, counseling and physiotherapy as well as convenient visiting hours (from 9 a.m. to 6 p.m.), allowing families the chance to spend as much time as they can with their loved ones.

By combining spiritual and medical care the hospice ensures that patients are not only cared for but are also given hope. The positive effects of spiritual care on patients' quality of life have been reported among patients of all age groups and patients with different medical conditions.

Chalil has also seen this among her patients as she has noted that those patients with faith and a positive attitude usually have better outcomes and "live longer." 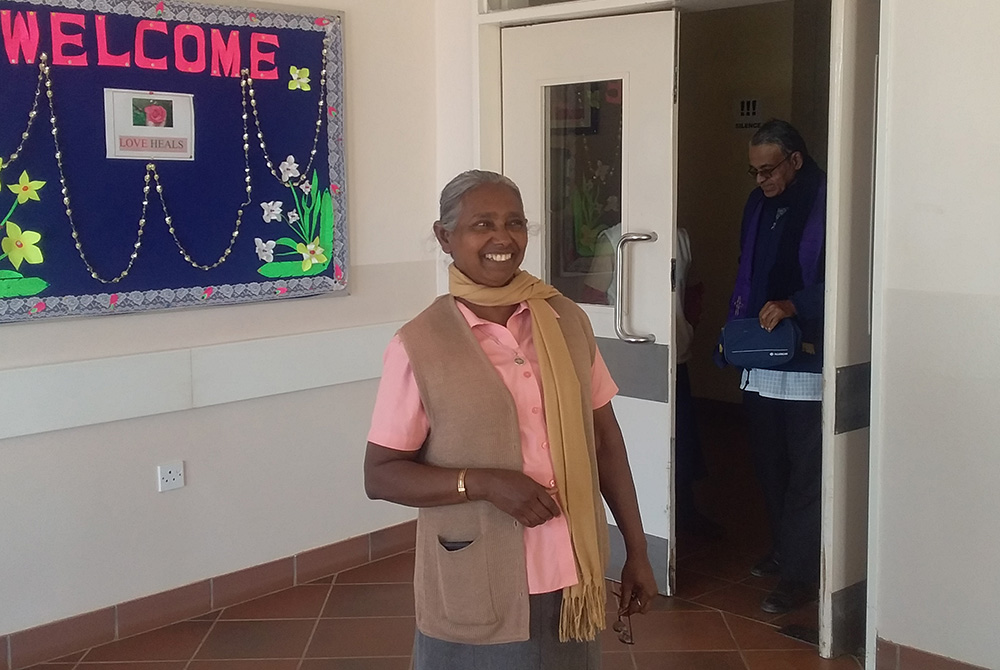 The effects of a positive outlook are clearly illustrated during the meeting between Mathew and Oliver.

Oliver first visited the hospice in 2012, due to a fall at his construction job that resulted in a broken leg. In 2018 he was once again admitted to the hospice as he had developed an infection on the same leg, which eventually led to his leg being amputated. He is currently part of the home-based care program as he awaits his prosthetic leg. He aims to do everything he was able to do prior to the amputation.

"It was a very scary experience and a painful experience," Oliver told Mathew. "You keep asking yourself how I will live after this, but I was determined to do it and get back to my family and my gardening and here I am."

He credits the sisters' care for his recovery and describes them as "God sent."

"They gave me all the help and support I needed. From 2012 before my leg was amputated, they have been there for me. After the amputation, they were there and even today they are still here, taking care of me. What more could you ask for?" he says with a smile. 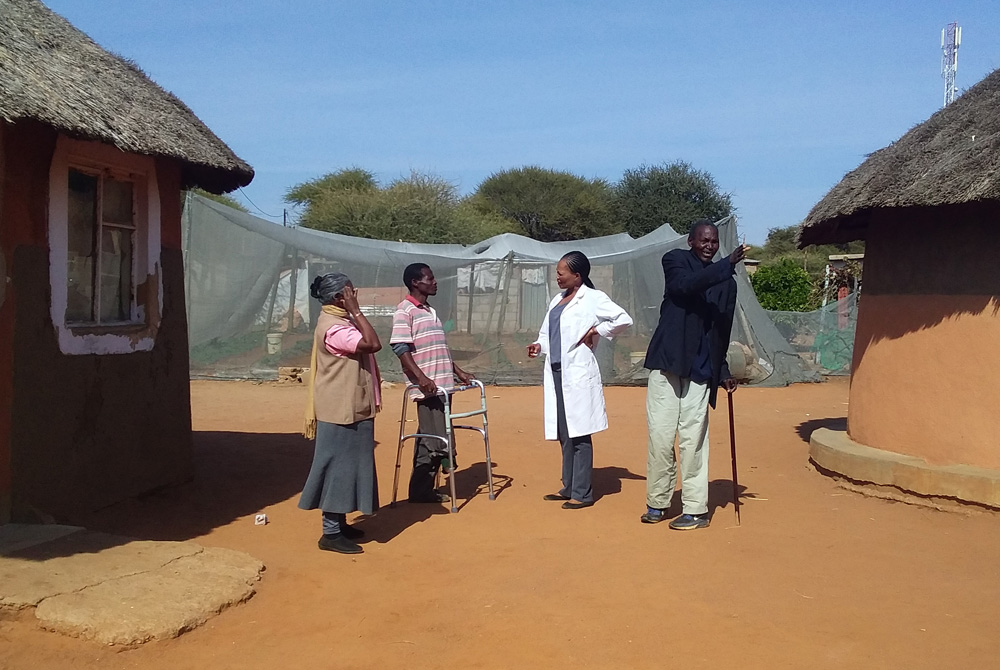 During this meeting, Chalil quietly watches as the two men share their stories like old friends and only interrupts when Oliver unwittingly reveals that before he gave the go-ahead for the amputation, he had been to a traditional healer who burnt his leg in an attempt to save it.

At this point, she exclaims, "You told me that your mother did that, you did not say it was a traditional healer at the time."

"How could I, tell you that," is his sheepish response.

Back at the hospice. Sr. Sunila Erumangalathu is busy in the office going over her administrative duties. She manages a staff of 16 including nurses, guards, care staff and support staff.

As a qualified nurse with years of hospital administrative experience, the hospice was a good fit for her.

She describes her work as "challenging but very satisfying" and an opportunity to "draw closer to God." 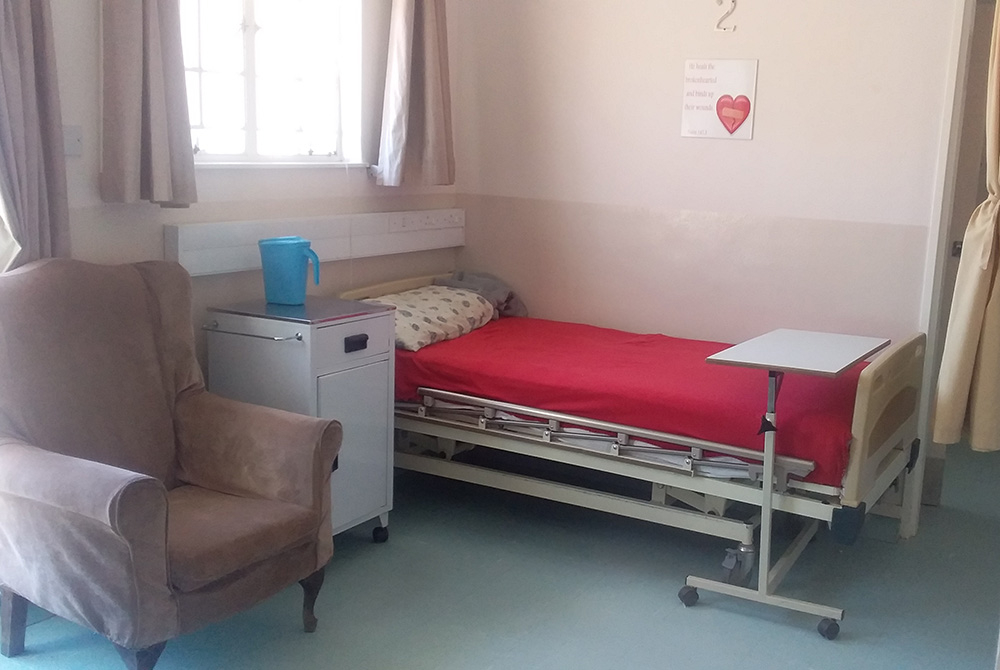 One of the 10 rooms at the hospice (Rumbi Chakamba)

"Working with terminally ill patients can be very challenging as you are constantly confronted with sad cases, so whenever I feel a bit down because of a patient's situation I turn to God. I talk to my God; there are a lot of things you cannot do but God can do. So working here is a constant reminder of that and has helped me draw closer to Him," she explained.

The work that they are doing has not gone unnoticed as Pabalelong has become an integral part of the community. This is attested by 46-year-old Harry Mosweu, a member of the community who approached the sisters to help take care of his sister after her stroke.

"It has been very difficult for me to take care of her because as a man I cannot bath her or help her change, so she has not bathed in the last two days. Everyone I asked for help or advice just told me to 'go and see the sisters, they will help you, they help all the sick people in the village,' so I came here (to the hospice)," he says.

Mathew is also relying on this dedication as he begins his amputation journey. "After seeing Oliver and his family and the work that he still does, I feel a little better about my situation, but I am still afraid. It is a big change but at least I know that you will be with me," he says to Chalil.

[Rumbi Chakamba is a freelance journalist based in Southern Africa. With a background in international relations, Chakamba specializes in regional development and gender reporting.]