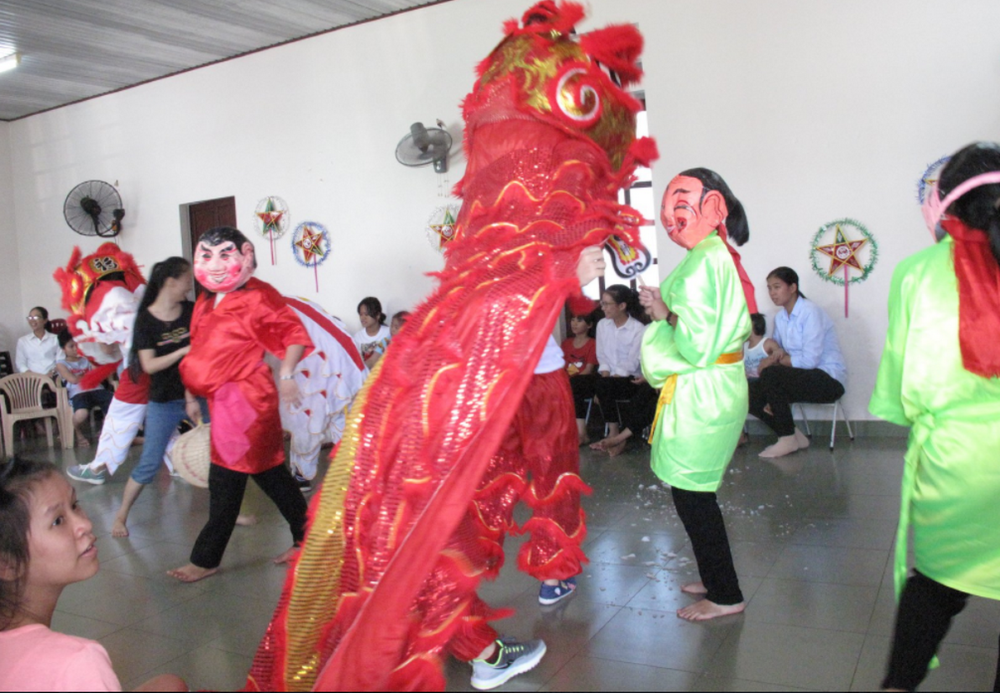 Five sisters of the Daughters of Our Lady of the Visitation perform a lion dance in colorful costumes to bring good luck and fortune to 30 children in their community in the Huong Thuy district of Thua Thien Hue province Sept. 7. One of them, Sr. Marie Le Thi Dieu Mai, said they also offer lanterns and cakes to the children of single mothers. (GSR photo/Joachim Pham)

During the Mid-Autumn Festival, which marks the traditional end of the harvest season and is the year's biggest children’s festival, children wearing carton masks run around with colorful flower- and animal-shaped lanterns, sing mid-autumn songs, perform lion dances, and enjoy traditional foods and games.

This year's festival fell on Sept. 10, but people held festivities weeks earlier, offering each other mooncakes — a traditional baked food made with rice flour, green tea, beans, and sesame seeds.

The festival, also called Lantern Festival or Moon Festival, is the 15th day of the eighth lunar month and is popular in China, Vietnam and other Southeast Asian countries. 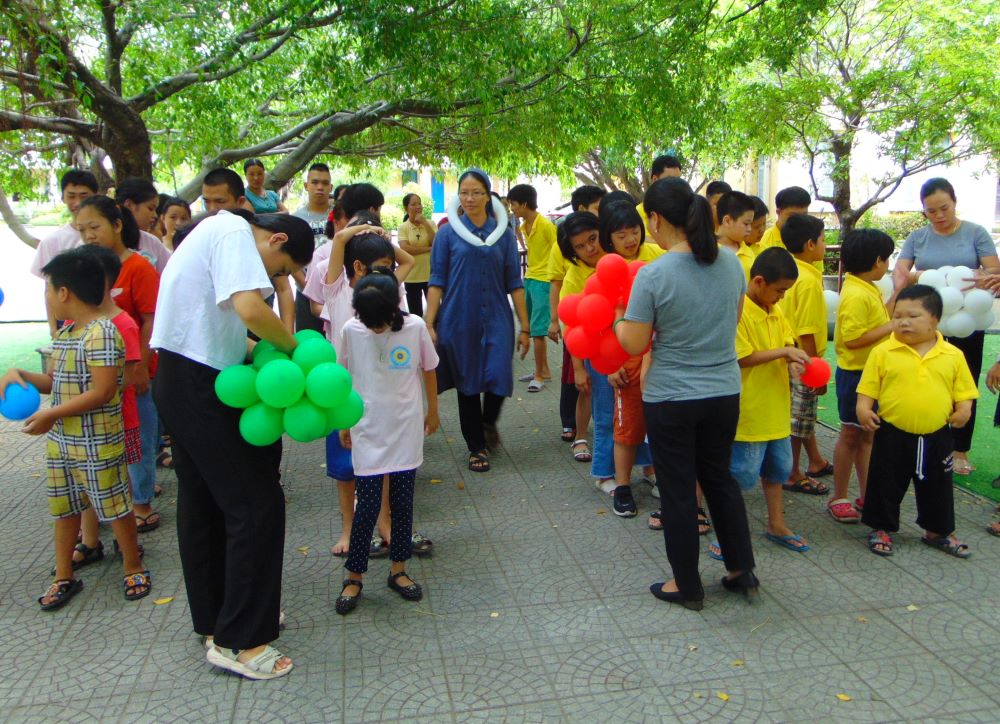 Lovers of the Holy Cross of Huế Sr. Maria Truong Thi Bich Thao (center) and other volunteers lead 60 children who are hearing-impaired and mute to play a balloon game at their convent in Hue Sept. 7. Thao said the children from local impoverished families are given traditional games to develop their senses and integrate into society. Nuns and teachers feed and care for them year-round. (GSR photo/Joachim Pham) 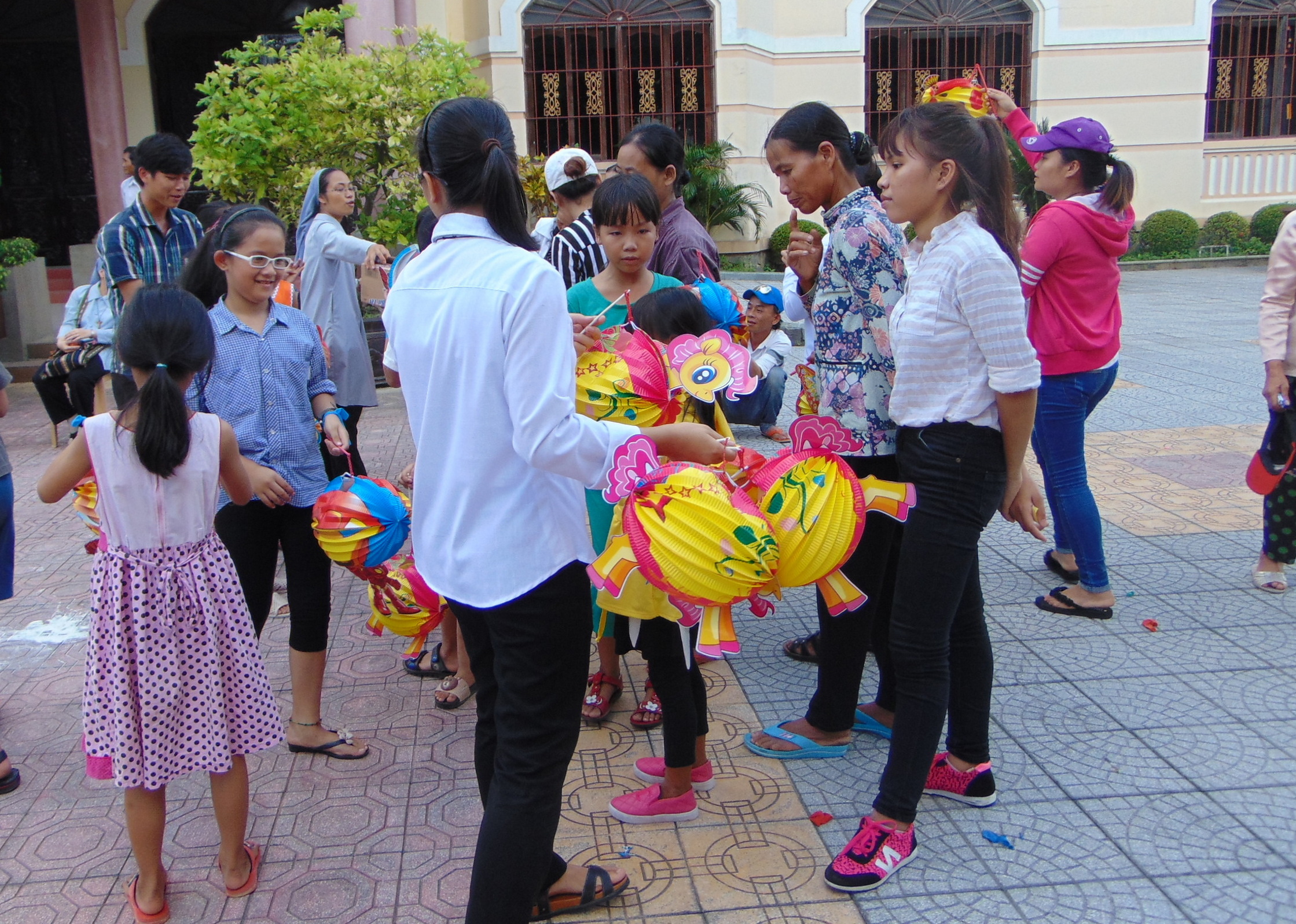 Sisters of St. Paul de Chartres offer food and colorful lanterns to 50 children in Hue whose families live on boats Sept. 7. Many of the children drop out of school and sell food in the streets for a living. "We try to do useful things for the children to enjoy the festive joys," Sr. Anna Tran Thi Nhan said. (GSR photo/Joachim Pham) 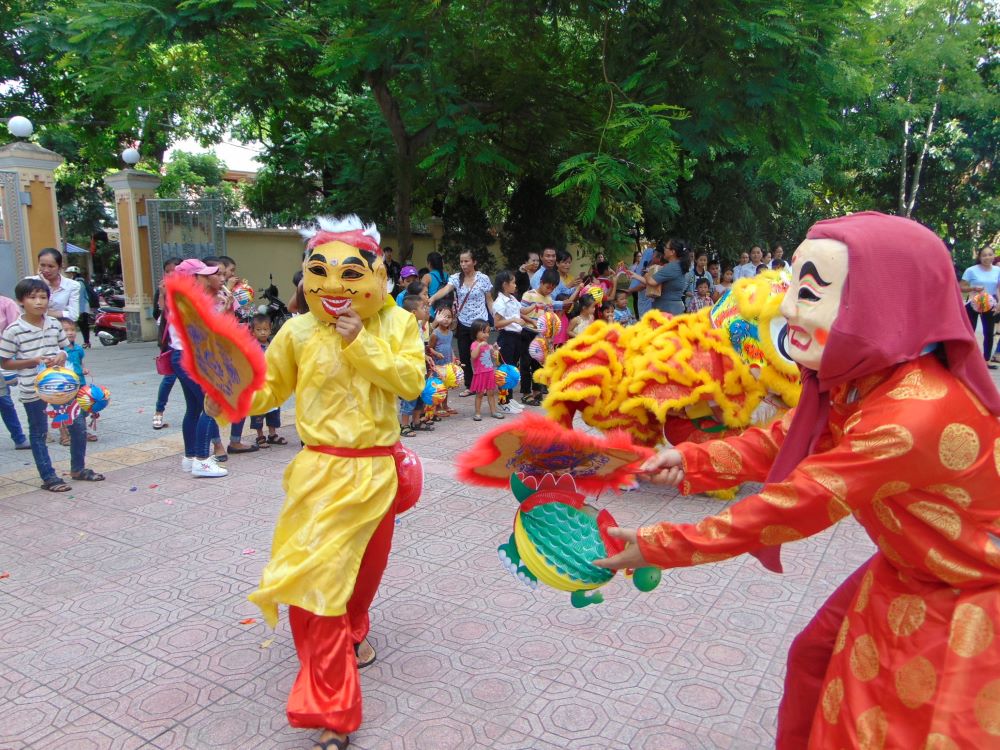 Some 100 orphans and children of families with HIV/AIDS watch a lion dance with drums and are given lanterns and candy by sisters from the congregation Filles de Marie Immaculée (Daughters of Mary of the Immaculate Conception) in Hue Sept. 7. (GSR photo/Joachim Pham) 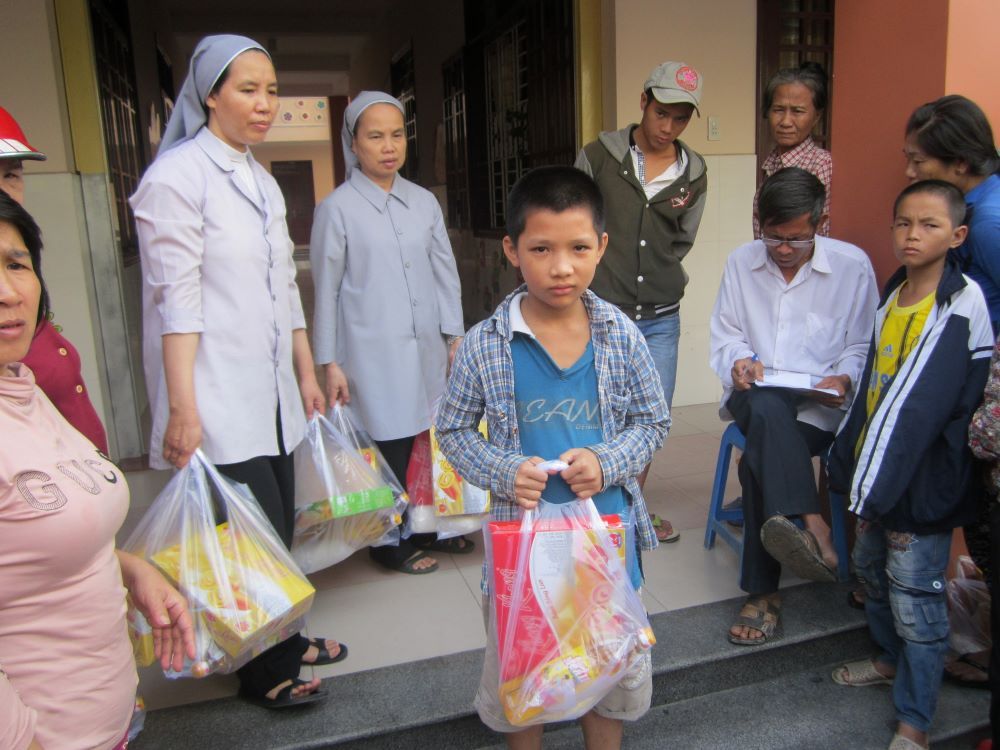 Le Dinh Thuan (center), an orphan who lives with his grandmother in Hue, receives cake and cooking oil from St. Paul de Chartres nuns Sept. 7. Sr. Agatha Ngo Thi Hong (center right) said that the Lantern Festival is a chance for children to show gratitude to their parents by offering them gifts. (GSR photo/Joachim Pham) 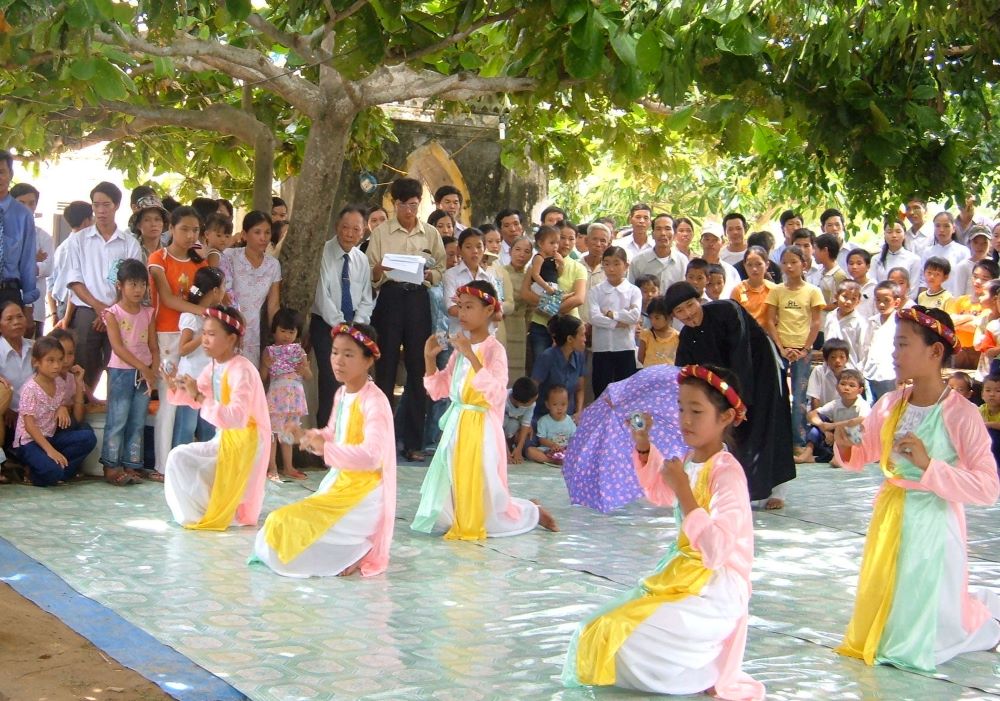 Children in traditional clothes do folk dances for the annual festival and honor Mother Mary on the feast of the Nativity of the Blessed Virgin Mary Sept. 8. The event at Tan Luong Parish in Quang Trị province is organized by the Daughters of Our Lady of the Visitation, who also distributed cakes and candy to 70 children. (GSR photo/Joachim Pham) 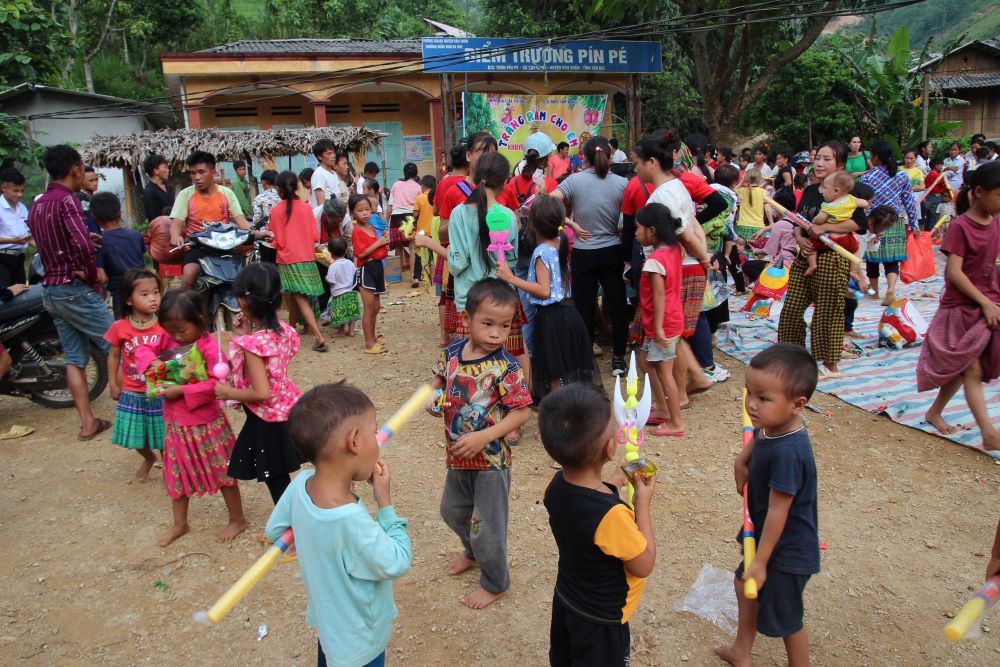 More than 200 Hmong ethnic children from Pin Pe Subparish in the mountainous province of Yen Bai attend the celebration of the Mid-Autumn Festival, organized by the Missionaries of Charity nuns and Catholic volunteers from Hanoi Sept. 3. The children receive confectionery, soft drink, fruits, toys, lanterns and scholarships. (GSR photo/Joachim Pham) 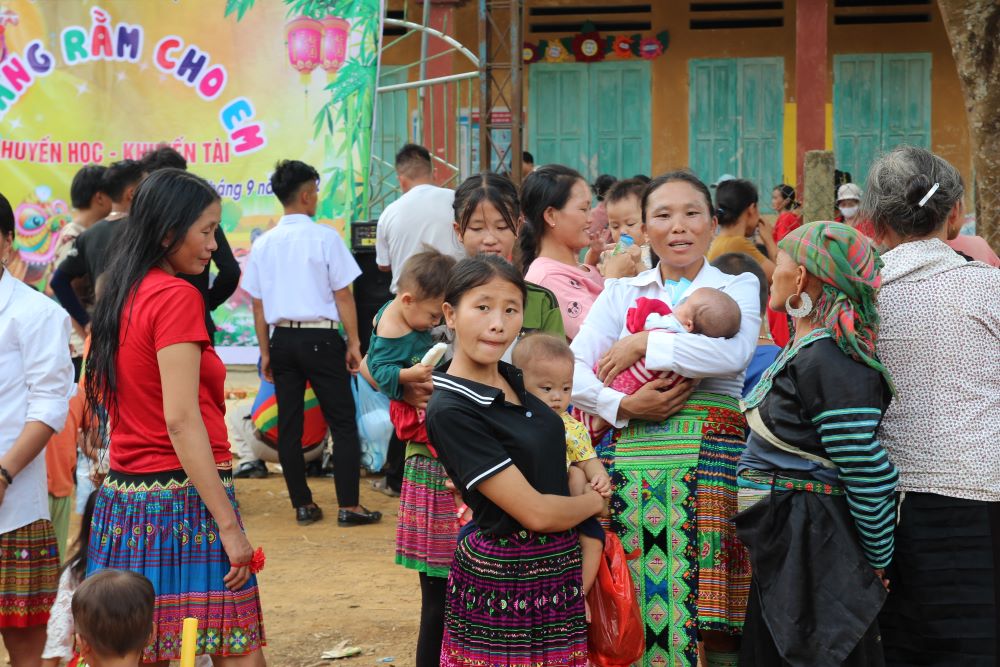 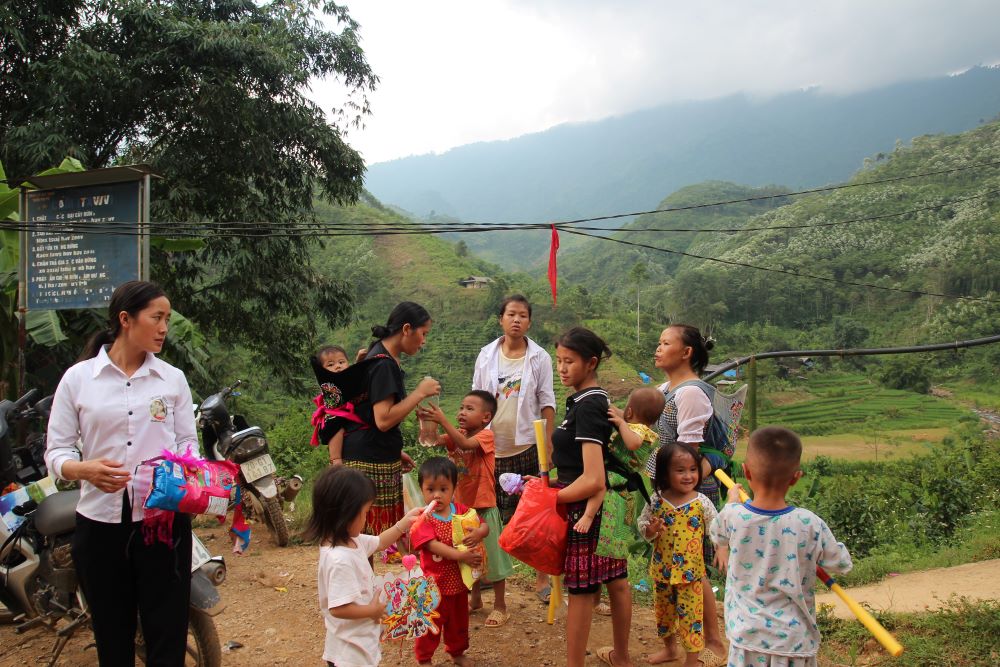 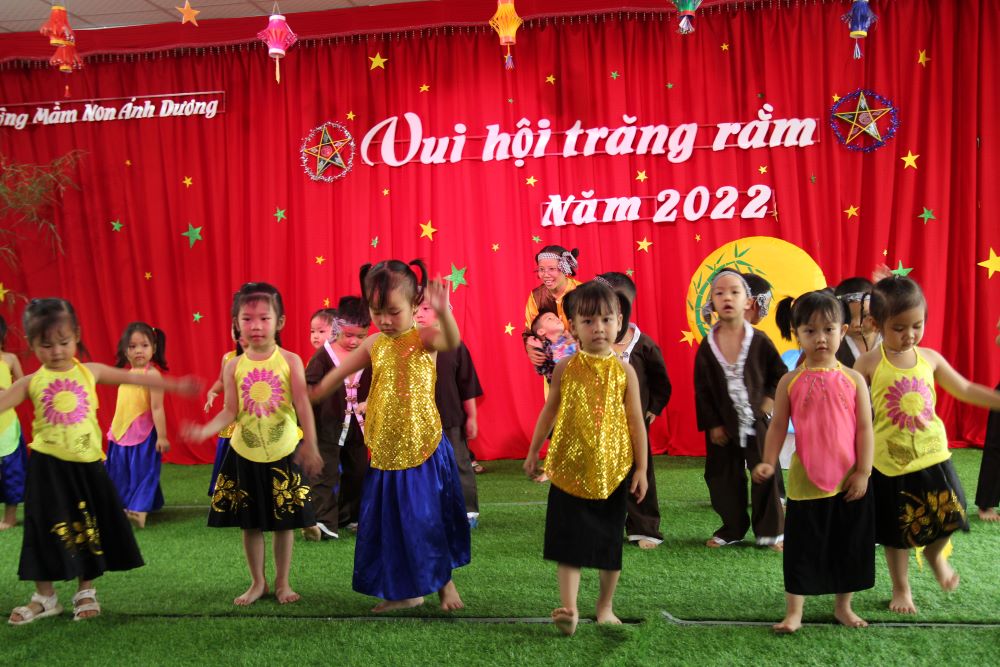 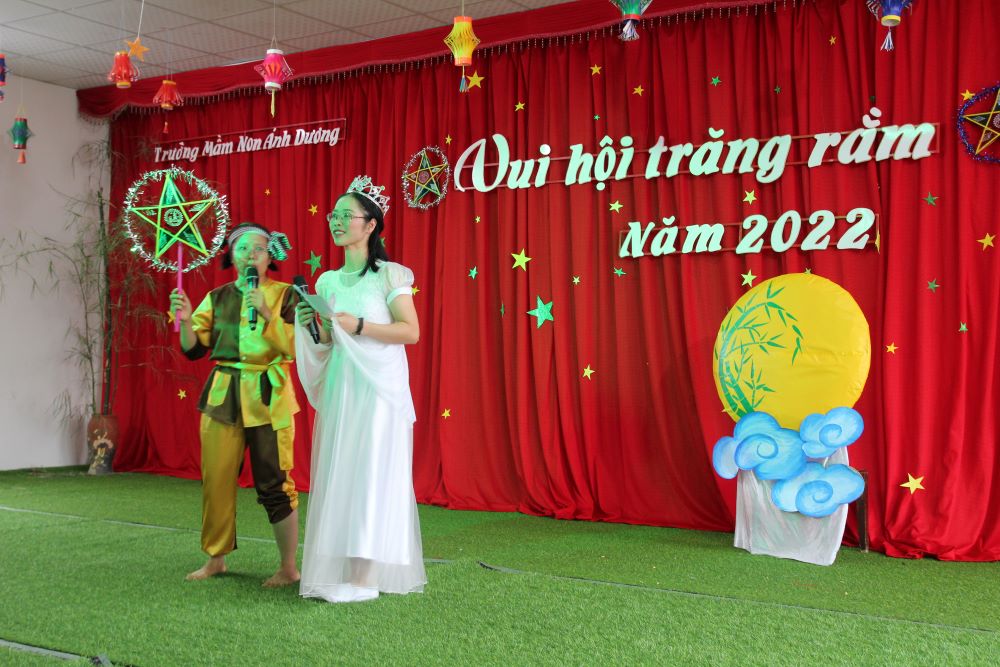 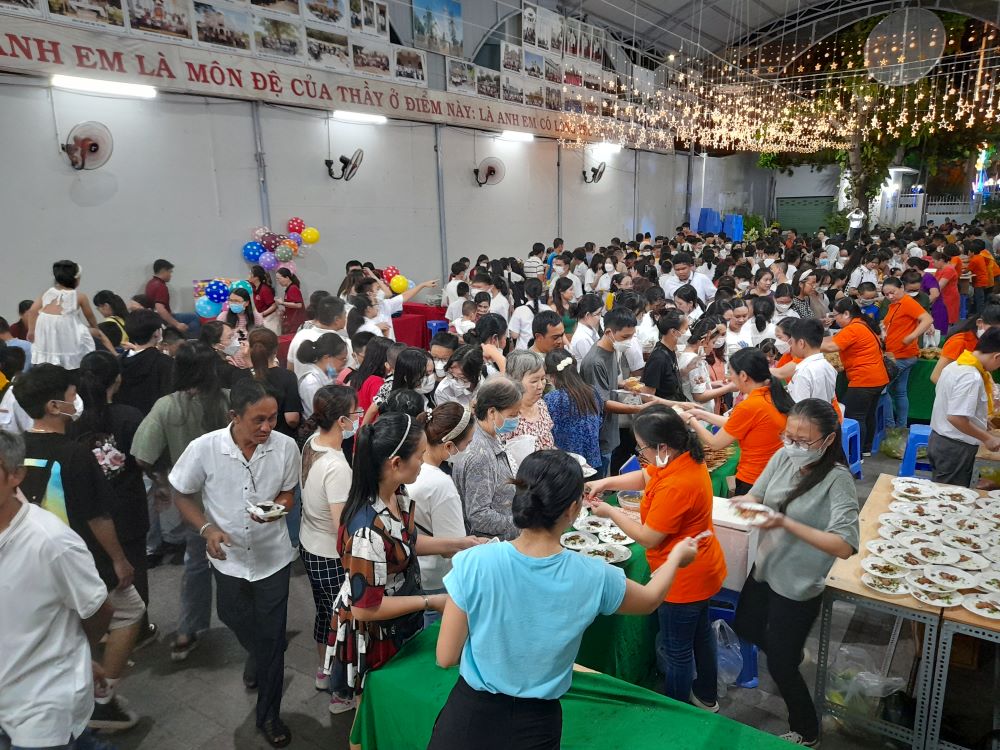 Children and their parents enjoy traditional food served by Our Lady's Immaculate Heart sisters and catechists at Bac Thanh Church in Khanh Hoa province Sept. 11. After daily Mass during the summer, children receive gift certificates, which they use to buy food during the festival. (GSR photo/Joachim Pham)