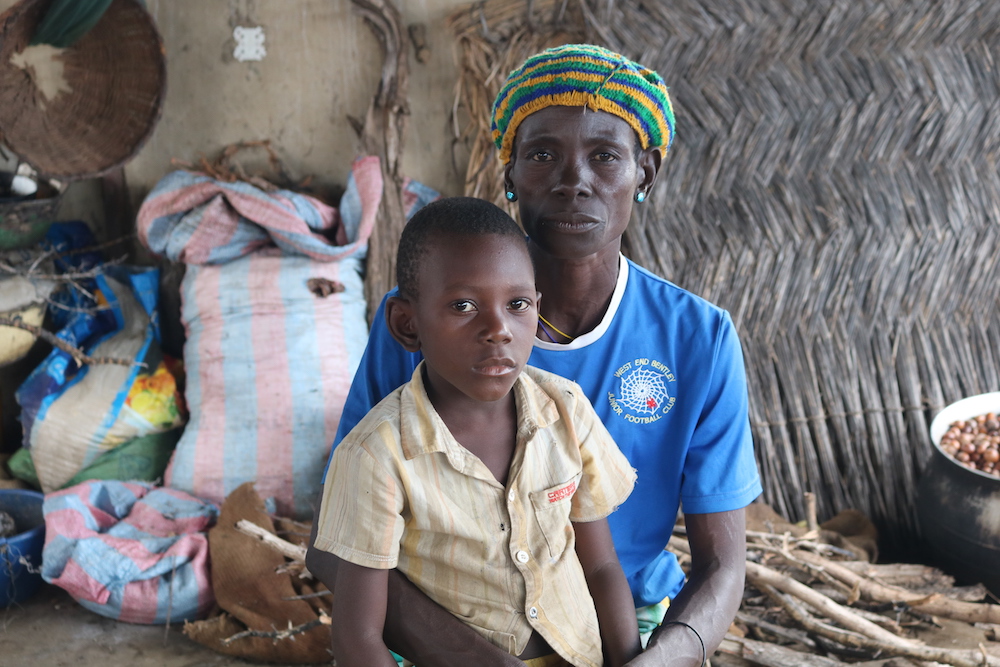 Vivian Salamatu, outside her house, relates how she escaped death from angry villagers who had accused her of killing her brother-in-law. (Doreen Ajiambo)

Vivian Salamatu and 200 hundred other women here are bound together for life. They share each other's misfortunes and all have a similar story. They were accused of witchcraft, beaten, cast out and sent to "witch camps" that serve as havens.

"When my nephew died after a short illness, everyone hated me," Salamatu explains in Dagbani, her native language. "My brothers-in-law said I was responsible, they accused me of being a witch."

Dozens of elders and villagers gathered at her home to determine her innocence or guilt. One of the elders participating in the ritual test grabbed a chicken, slit its throat and flung it overhead. After it finished struggling, the chicken fell head first and died face down.

It was clear by the village standard she was a witch.

"If the chicken had died face up, then I would have been declared innocent of witchcraft," said Salamatu, 39, a mother of three. "That night, villagers led by my brothers-in-law attacked me with machetes and set fire to my house. They wanted to kill me with my children."

Her attackers, who had tied her up with a rope, were intercepted by nuns and local authorities. She was rescued with her children and taken to Gushegu "witch camp," located in the north of the country.

"I can't believe I'm alive today," she said, noting that the allegations came barely a year after losing her husband in a road accident. "I had no one to protect me from the angry villagers. But I want to thank God and the sisters who came and rescued me. It was a miracle!"

Salamatu is among hundreds of women who have been rescued by the Missionary Sisters of the Poorest of the Poor and taken to Gushegu. The refuge, which is run by Sr. Ruphina Anosike and other sisters, provides homes to women accused of witchcraft. Anosike also cares for the homeless by providing meals and other necessities such as medical care and education for their children.

The immense majority of these women are widows with children. They have been accused by relatives, or sometimes by a competing wife, neighbors or village elders, of witchcraft, mainly of killing their husbands or other family members, said Anosike.

"It's heartbreaking to see that these women suspected to be witches are no longer needed in their families and communities," she said, noting that her camp, which accommodates more than 200 women, has become a safe haven for widows accused of witchcraft. "They stay here because they have no place to go, no food to eat, and no one cares for them." 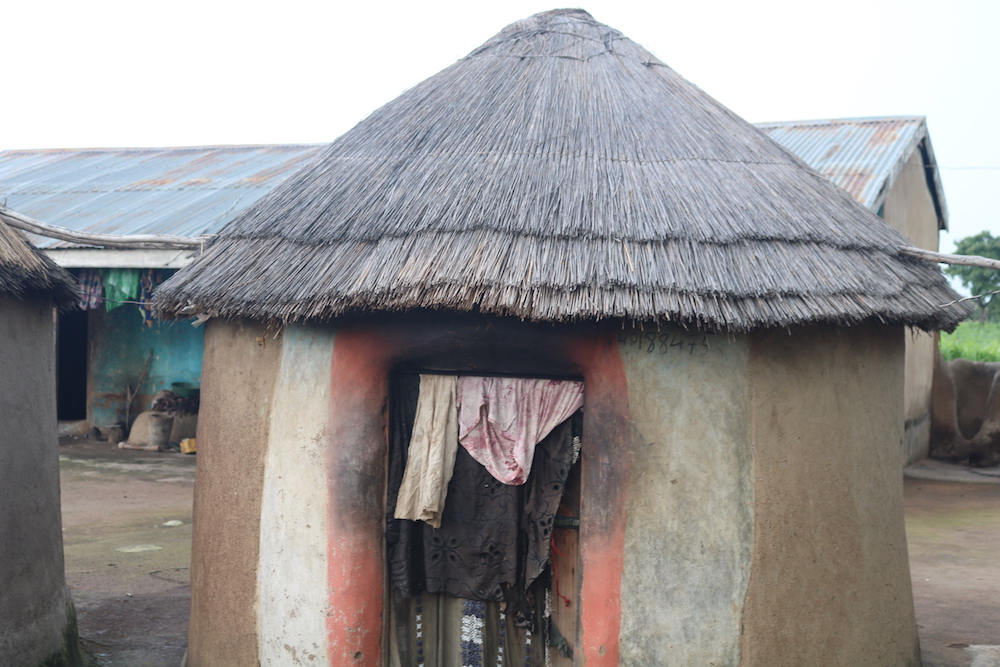 The motive to call someone a witch

Anosike notes that the chief motive behind such acts is often greed, and labeling these women as witches becomes a means of taking away their husbands' wealth. Camp residents also include mentally ill women and children who are considered outcasts in Ghana, she said.

Salamatu agreed there is a motive.

"My father-in-law wanted to take cows, land and some money that my husband had left, and I refused," she said, adding that her husband's relatives became hostile to her and toward her children. "They later accused me of practicing witchcraft so that I could be chased away and leave them everything. One of my neighbors told me they held a meeting to discuss how they could chase me away so that they would be able to take my properties."

Thousands of women and their children in northern Ghana have been left homeless after being accused of witchcraft, according to a 2018 report by the U.S. State Department. The report indicates that there are more than six witch camps spread throughout the northern region, holding 2,000-2,500 adult women and 1,000-1,200 children.

There is a widespread belief in witchcraft in the West African nation, according to 2009 Gallup surveys, despite 96% of the population declaring themselves to be active worshippers in one of several world religions. The belief in the phenomenon has devastating consequences. Elderly women believed to be witches are often persecuted, ousted from their homes or even murdered. Their children are also cursed and not allowed to go back home after they have grown.

Though both men and women can be accused of witchcraft, the vast majority are women. Men are considered to have a strong socio-political base and are therefore better able to successfully contest the accusations leveled against them, knowledgeable observers say.

The witch camps are unique to northern Ghana. However, the West African nation shares with other African countries an endemic belief in witchcraft, with drought, death, poor harvest, illness and other natural disasters blamed on black magic.

The situation has prompted religious sisters in this part of the country to provide residential shelter for the women and children shunned by relatives. Anosike depends on supporters to build homes at the camp and she pleads for food, clothing, bedding and other necessities from neighbors and passers-by.

"I actually go out every morning to beg for food for these women to ensure they have something to eat," said Anosike. "The bishop also helps us very much, especially with food and money to run the camp. These women also survive by collecting firewood, selling little bags of peanuts or working in nearby farms."

A superstition that sticks

Witchcraft is a stubborn phenomenon in African cultures, experts say. Witches and wizards are thought to possess intrinsic and supernatural powers that are used to create evil. Many seek out the services of witchdoctors and wizards to find solutions for their relationships, troubles and even for good health. However, the practice has for years also had its negative side. In worst-case scenarios, such beliefs lead to murder and destruction of the accused witches, they said.

"The belief in witchcraft is deeply entrenched in Africa culture and dictates people's lives," said Charles Nzioka, a professor of sociology at the University of Nairobi in Kenya. "Witchcraft is in people's minds. If someone loses a job, Westerners assume that it's due to economic conditions or poor performance. An African is likely to say that someone used witchcraft to make or confuse an employer to hate and sack the person concerned."

Nzioka said that the belief in witchcraft in Africa is intended to keep order in society; any deviation in behavior may lead to an allegation. As in Ghana, women who do not want to conform to society's expectations may fall victim to the accusations of witchcraft, he said.

"For instance, when a woman accumulates wealth and becomes independent, she deviates from local norms that recognize only men to own wealth, and as such she becomes a target," said Nzioka. "Sometimes women are targeted by relatives of the husbands in order to inherit their son's wealth."

Nato Blenjuo, who has lived at Gushegu camp for the last two decades, explained how she escaped death by a whisker after villagers claimed she had used witchcraft to kill her ailing husband. A post-mortem was reportedly held, establishing that her husband died of malaria, she said. Malaria has continued to be the leading cause of death in the country, according to 2018 data of the Centers for Disease Control and Prevention.

"They really wanted to kill me," said the 66-year-old widow who lives in one of the huts made of mud, sticks, grass, cow dung and cow's urine. "My stepson led other irate villagers with machetes to attack me at night. They set my house on fire, but I was lucky to escape with my three children into a nearby bush and I made my way to this camp." 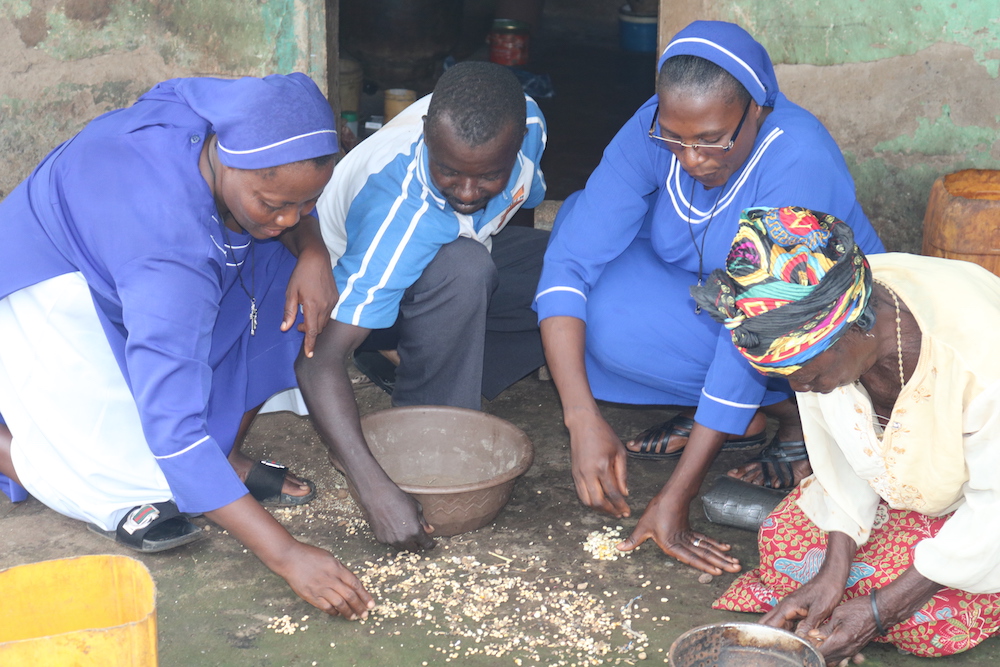 Srs. Ruphina Anosike, left, and Monica Yahaya, second from right, help sort out the grains that had been swept from the market by women accused of witchcraft in Ghana. These women survive by collecting firewood, selling little bags of peanuts or working in nearby farms. (Doreen Ajiambo)

Sr. Monica Yahaya said that women are seen as the most vulnerable members of the population and are therefore often labeled as witches because of their inability to contest the accusations. This explains why there are no men at the camps and women are predominantly the victims, she said.

"The problem here is that relatives cannot allow widows to inherit their husband's possessions," said Yahaya, who works with Anosike at Gushegu camp. "They will definitely look for a reason to accuse them and then send them away from their homes in order to take properties left by their dead husbands. Without a husband, these women really have no way to defend themselves after such an accusation."

Osei Ekow, an elder, denies that greed is the impetus behind calling someone a witch. He says the villagers rely on the traditional slain chicken ritual to determine whether a woman is a witch.

"That's our culture, and we must respect it," said Ekow, 75, who says he has witnessed tens of thousands of widows being sent away from their homes. "There's no way that ritual can be wrong. These women taking refuge at the camps are all witches because it was culturally confirmed."

The government has on several occasions tried in vain to close down the camps in a bid to discourage attacks on women. Officials contend the very existence of witch camps encourages people to levy allegations of witchcraft knowing that the women they accuse will find refuge at the camps.

"People should stop accusing and harassing innocent women of witchcraft," said Issah Mahmudu, a government official who oversees the Legal Aid Department in northern Ghana. "We want to encourage suspected witches and wizards who have been harassed to report to the police so that investigations begin. The law protects every citizen."

Mahmudu said the incidents of witchcraft accusations have recently declined but encouraged local chiefs to dispel outdated cultural practices that are injurious to others.

"These women are vulnerable, that's the reason they are attacked," he said. "The chiefs should arrest any person committing offenses that are recognized under the law. The laws of this country condemn dehumanizing the fundamental human rights of all citizens."

Anosike and other sisters are trying to shape the way people think about witchcraft. They conduct weekly seminars in various villages to campaign against ongoing violence on women, educate the public about the myths that surround witchcraft, rehabilitate and reintegrate women into their homes, and call for an end to the persecution of alleged witches and to superstition.

"Cases of women being chased away from their homes have of late been reduced as a result of the ongoing campaign, but more needs to be done," she said. "We are going to continue educating people in the villages to ensure women live freely without fear of their rights being abused due to the belief in witchcraft."

However, victims of the attacks call for more to be done.

"I have never been a witch, I don't know how witchcraft works," said Salamatu. "Men should treat us with dignity because we are all human beings created in the image of God."