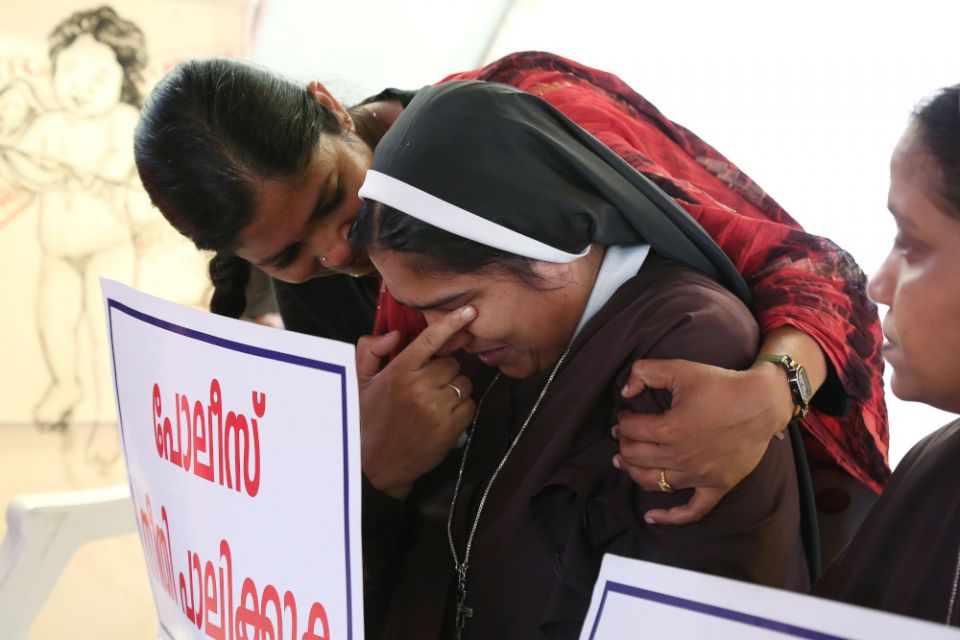 A woman religious is consoled during a Sept. 13, 2018, protest in Cochin, India, demanding justice after a nun accused Bishop Franco Mulakkal of Jalandhar of raping her. On Nov. 5, 2020 India's Supreme Court dismissed the bishop's second appeal seeking to clear him of charges of raping a nun. (CNS photo/Reuters/Sivaram V)

New Delhi, India — India's Supreme Court dismissed a Catholic bishop's second appeal seeking to clear him of charges of raping a woman religious, clearing the way for trial in a district court.

The bishop's petition sought a review of the court's earlier judgment, which denied his discharge plea seeking to dismiss the charges.

"We have perused the review petition and its connected papers. We do not find any error in the order impugned, much less an apparent error on the face of the record, so as to call for its review. The review petition is accordingly dismissed," the court's latest order said.

The discharge petition contended that even if the body of evidence collected against the bishop is proven right, it does not demonstrate he committed the crime.

The same panel of justices dismissed his previous discharge plea Aug. 5 and asked the bishop to face trial.

The case made its way to the Supreme Court after a lower court in Kottayam district of Kerala started the bishop's trial in August, more than a year after police filed rape charges against him.

The case is based on a complaint filed with police by a woman religious in June 2018. The nun, a former superior general of the Missionaries of Jesus, an indigenous congregation under Mulakkal's oversight, complained that the prelate raped her 13 times when he visited her Kerala convent from 2014 to 2016.

Mulakkal, however, maintains the nun fabricated the charges after he initiated disciplinary action against her for violating her religious vows and financial misdeeds. 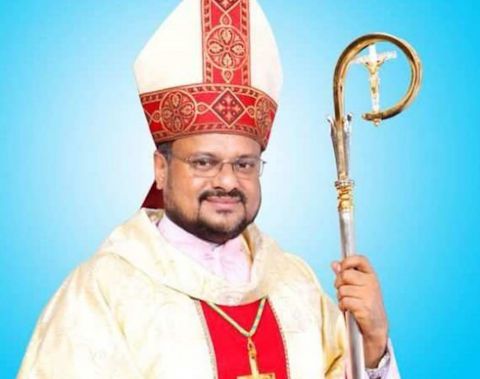 Bishop Franco Mulakkal of Jalandhar, India, is pictured in an undated photo. India's Supreme Court on Nov. 5, 2020 dismissed the bishop's second appeal seeking to clear him of charges of raping a nun. (CNS photo/courtesy Diocese of Jullundur)

The nun has already recorded her testimony. Court records show that cross examination of both parties has begun and will continue on Nov. 12-13.

Lawyers familiar with the case said the questioning of witnesses would start after the court completes cross examination.

In September 2018, days before police arrested Mulakkal, the Vatican removed him from the diocese's administrative responsibilities by appointing an apostolic administrator. Mulakkal, however, continues to hold the title of bishop of Jalandhar and resides in the bishop's house.

"Now, Mulakkal has exhausted all his legal remedies to escape from the trial," said Riju Kanjookaran, convener of Save Our Sisters, a lay movement formed to support the rape victim.

Kanjookaran also appealed to church leadership in India to suspend the bishop and require that he move from the bishop's residence in Jalandhar, given the top court's dismissal of his review petition.

"It is an opportunity for the church's leadership to rise to the occasion and prove its neutrality by removing him from the bishop's house and suspending his title as bishop until he comes out clean from the case," Kanjookaran told ucanews.com Nov. 6.

Food banks, firewood and outreach: Sisters minister to the Navajo amid pandemic