Mulakkal appears for trial in nun's rape, next hearing set for Jan. 6 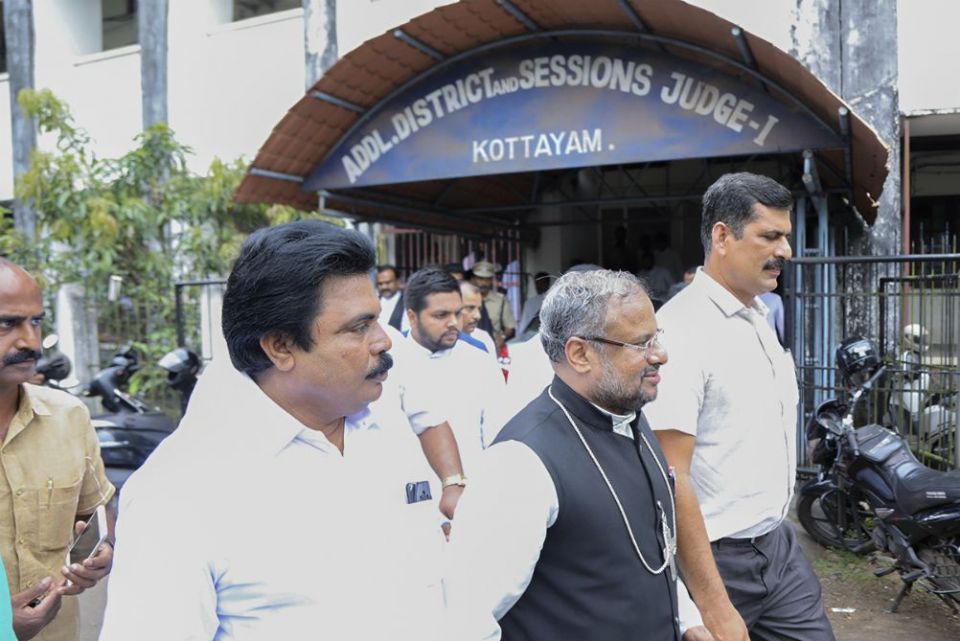 Bishop Franco Mulakkal of Jalandhar arrives at court in Kottayam, Kerala, on Nov 30 to stand trail in the rape of a nun. (M.A. Salam)

The Additional District and Sessions Court in Kottayam, a Christian-dominated town in the southwestern Indian state of Kerala, is expected to frame the charges against the accused at its next proceeding.

Mulakkal was accompanied by 15 priests on the 2,000-mile journey to Kottayam from his diocese in the northern Indian state of Punjab. A few of his relatives in Kerala joined the group of his supporters.

The 55-year-old-prelate reached the court premises in a rented van at about 10:35 a.m., M.A. Salam, one of the waiting press photographers, told Global Sisters Report. Security personnel allowed only Mulakkal, his legal team and guarantors to enter the courtroom and asked the priests and others, including the media, to wait outside, said Salam, who observed the proceedings through a window from outside.

The judge took his seat at 11 a.m. and heard a couple of cases before turning to the Mulakkal matter. When a court attendant called Mulakkal's name in a loud voice, the prelate went to the witness box. The judge then announced a 10-minute break after which the bishop returned to the witness box.

Meanwhile, two guarantors for the bishop's bail extension submitted their documents and photocopies to the court.

After the judge extended the bail and fixed the date for next hearing, Mulakkal returned to his seat and waited half an hour, apparently to avoid the public and the media waiting outside, Salam said. 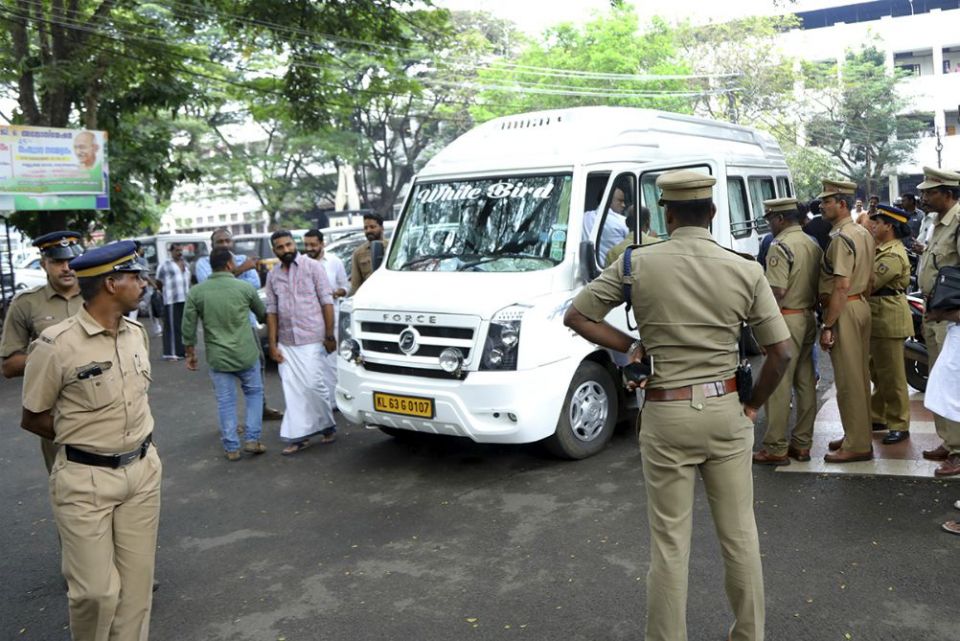 Police provide security outside the van bringing Bishop Franco Mulakkal of Jalandhar to the Additional District and Sessions Court in Kottayam, Kerala, on Nov 30. (M.A. Salam)

The bishop looked cheerful when he emerged from the courtroom and interacted with the waiting priests before leaving in the van, the photographer said.

Six priests joined the bishop in his vehicle while others left in separate cars to an undisclosed destination.

Neither the bishop nor anyone from his team talked to the media.

"There was a small crowd in the court premises to see him. Many did not turn up, as there was rain in the morning," Salam said.

Before coming to the court, Mulakkal and his companions had prayed at nearby St. Antony's Church, a pilgrimage center. 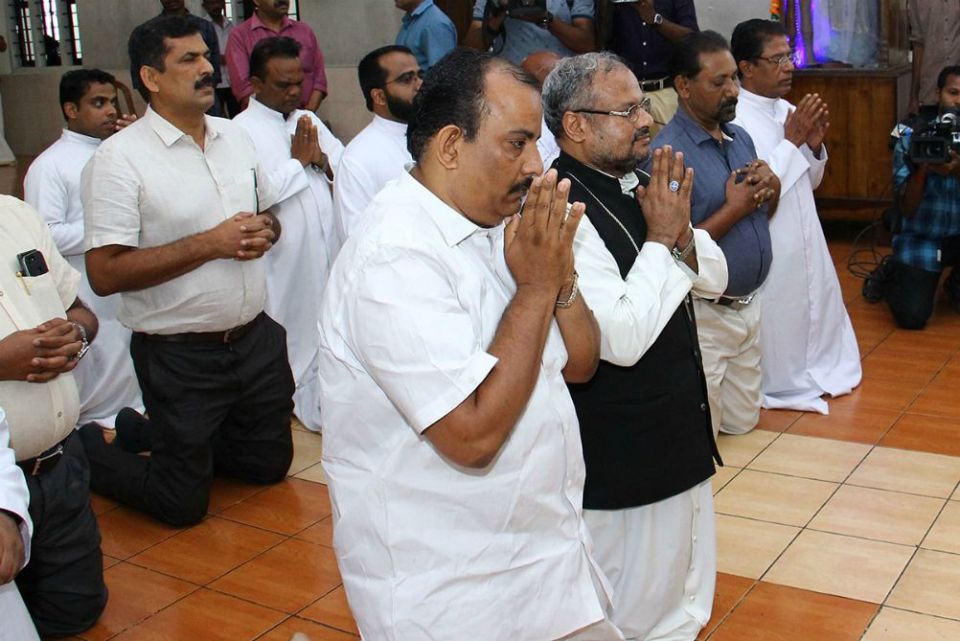 Bishop Franco Mulakkal of Jalandhar, in black, and supporters pray at the St. Antony's Church, a pilgrimage center in Kottayam, Kerala, before appearing in court in the rape case of a Catholic nun. (M.A. Salam)

Mulakkal was accused of raping the former superior general of the Missionaries of Jesus, a congregation under the Jalandhar Diocese, multiple times between 2014 and 2016. The alleged crimes took place in the guest room of the congregation's convent in Kuravilangad, a village 13 miles north of Kottayam.

The nun filed the police case in June 2018. Mulakkal was arrested on Sept. 21, 2018, but was released on bail three weeks later.

The trial was first fixed for Nov. 11, but was postponed due to the unavailability of the judge.

Some supporters of the survivor have expressed happiness that the trial has begun finally.

"The delay has brought us a lot of anguish," says Riju Kanookaran, an advocate for transparency in the church and the coordinator of Save Our Sisters (SOS), a civil society group formed to support the survivor and five nuns from her congregation who had joined a public protest in September 2018 demanding Mulakkal's arrest.

Related: Sister who questioned church on rape accusation is expelled by her community in India

Kanookaran pointed out that the case's chargesheet was filed six months ago. "It is sad that the real trial has not yet begun," he told GSR.

The Special Investigation Team that probed the case had submitted in April a 2,000-page chargesheet to a lower court in Palai near Kuravilangad where the bishop was presented after his arrest. The Palai court then transferred the case to the district court in Kottayam.

Mulakkal is accused of committing offenses such as wrongful confinement, rape of a woman incapable of giving consent, causing grievous bodily harm during rape, unnatural offense (or sodomy), and criminal intimidation.

"The way the accused bishop came to attend the trial with his entourage gives the impression that he has the full backing of the church," Kanookaran alleges.

"Who foots the travel and other expenses of 15 priests from his diocese?" he asks.

The SOS leader regrets that the Kerala government machinery and the church leaders back the accused, "not the innocent nuns."

Elaborating further, Kanookaran said, the survivor recently had complained to the police seeking action against Mulakkal and an online news channel for character attacks on her and her supporters. Subsequently, one of the investigation officers sent a notice to Mulakkal asking why his bail was not canceled for violating a bail condition.

"Within 24-hours of receipt of the notice, the officer was transferred and now [we have] no idea what happened to his notice," he explains.

"Against this background, the delay in the trail is a matter of grave concern for all of us," he says.

Meanwhile, Sr. Lissy Vadakkel, a prime witness in the case, has demanded a speedy trial. "I am being [pressured] through different people to change my statement given to the police," she told GSR on Dec 2.

The member of the Kerala-based Franciscan Clarist Congregation said an elderly woman, apparently under Mulakkal's influence, had pressed her to withdraw her statement to the police.

"She asked me to state that I had given the statement under a different mental state. She also warned me the statement against a bishop will destroy the church," said Vadakkel, a renowned charismatic retreat preacher.

Even her charismatic group members have exerted similar pressure on her, she said.

Earlier, her congregation tried to prove her to be mentally ill.

"I had given the statement to the police out of my conviction, and I will not go back from it under any pressure," she asserts.

She suspects Mulakkal and other church leaders are using money and power to sabotage the case.

"I want the nun to get justice. I believe Mulakkal will be punished for his crime," she added.

Fr. Augustine Vattoly, a priest in the Ernakulam-Angamaly Archdiocese and the first convener of SOS, says the Mulakkal case has damaged the church's image gained through ages of hard work, sacrifice and the holiness of priests, nuns and lay people.

"The church is supposed to be the watchdog of the conscience of the people," said the priest who has been asked to break his links with the supporters of the survivor.

Vattoly says Mulakkal "leaves no stone unturned to prove his power and authority whenever he comes to attend the court. He also makes sure to give the impression that the whole church is with him and not with the survivor," Vattoly told GSR.

Even those opposed to Mulakkal remain silent, giving a "negative impression" about the church, added the activist priest.

"Pope Francis asks everyone to be with the survivors of rape or child abuse or any other ills, but in this case, the survivor and her supporters are left to their destiny. What message are we giving to the new generations," he asks. 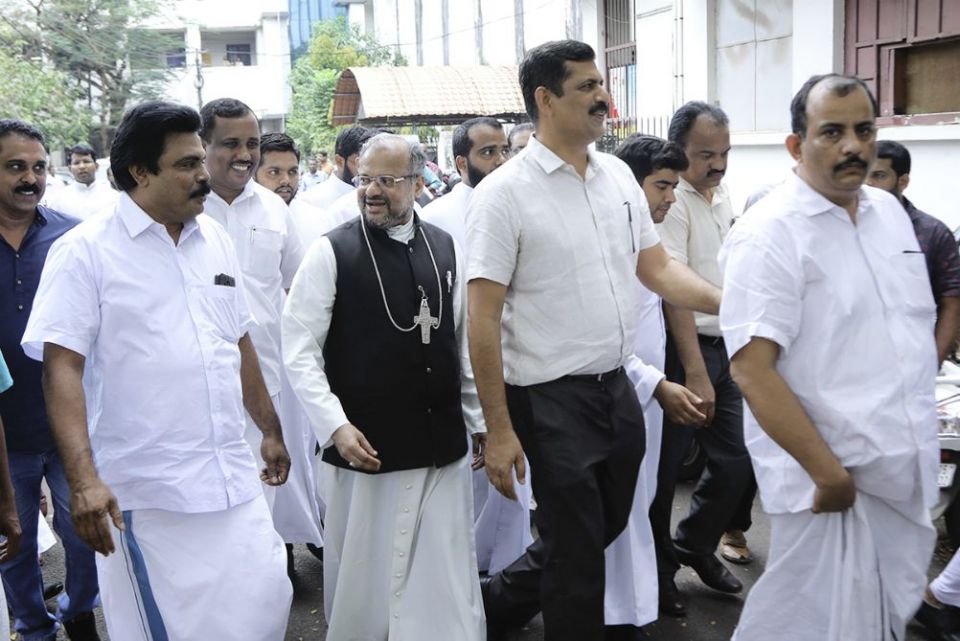 Sr. Lucy Kalappura, who was recently dismissed by the Franciscan Clarist Congregation for alleged violation of vows, warns that the lives of the victim and her five supporters will be ruined if the Mulakkal case is prolonged inordinately.

Kalappura, who still lives in her convent awaiting the result of her second appeal to the Vatican, maintains her congregation expelled her because of her public support of the victim and her companions.

"Whatever may be the outcome of the trial, it should be finished as fast as possible, failing which, the six souls will have no life," she told GSR.

"If the trial finishes fast, they can restart their life anew. Now no one cares about them, not even their congregation," says Kalappura, who on Dec. 1 created a ripple in Kerala announcing her plan to release her autobiography titled, Karthaavinte Naamathil (In the Name of the Lord).

Excerpts from the book, published in a Malayalam weekly, talk about consensual sexual relationships between priests and nuns in convents, and misuse of positions by priests and bishops to sexually abuse nuns.

She says she knows about the "horrendous experiences" some of her sisters have endured at the hands of priests and bishops.

"I am aware of some convents, where young novice nuns are sent to priests for their 'pleasure' as a matter of practice. They were made to pose nude for the priests for hours. They wouldn't be permitted to leave even when they plead," Kalappura writes in the book, which will be released on Dec. 10. 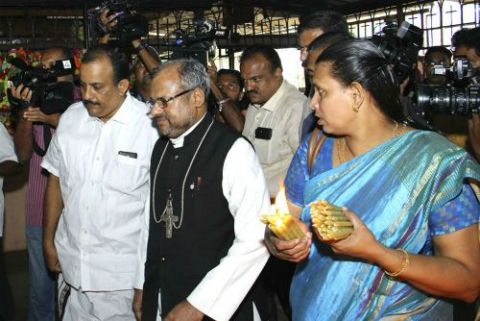 Kalappura said her "immediate motivation" to release the book was the denial of justice by the church to the survivor in the Mulakkal case.

"Church leaders are very well aware of the happenings in churches and convents, but do not support the innocent nuns. However, they came out openly supporting the accused bishop," she explains.

Sr. Anupama Kelamangalathuveli, spokesperson for the survivor and her supporters, says they are happy with the progress in the case.

"What can we say about the trial? We are bound to follow the orders of the court. We are hopeful that the trail will start from the next hearing and will get us justice," she told GSR.

Read this next: Q & A with Sr. Lissy Vadakkel: 'I want to live until I give my statement' in court

News | Mulakkal appears for trial in nun's rape, next hearing set for Jan. 6