Pope Francis has said that human trafficking is a modern form of human slavery, and he has been critical of governments, business leaders and those in civil society who turn a blind eye to it.

Now, Canadian artist Timothy Schmalz is hoping his new sculpture will help put a spotlight on an issue he believes too many individuals and governments would prefer to look away from. And on Sunday, Feb. 6, the pope offered his blessing — both to the sculpture and to the religious sisters on the front lines leading the fight against human trafficking.

The design for the sculpture is inspired, in part, by the work of a 19th-century Canossian religious sister, now saint, Josephine Bakhita, who hailed from the Darfur region of Sudan and was kidnapped by traffickers at age 9. Upon becoming free, she entered religious life and committed herself to caring for the poor and destitute. She is the patron saint of human trafficking victims and survivors.

The bronze statue design — which will eventually have permanent homes in locations in both Rome and the United States — depicts Bakhita opening up the gates of the underworld and allowing those enslaved by trafficking to be set free. More than 50 individuals represent a range of trafficking victims — including a child bride, young beggars, an individual trafficked for their organs, and both men and women enslaved by prostitution.

"Thank you for your courage," the pope said to the religious sisters present with a 10-foot bronze model of the statue in St. Peter's Square during his remarks after the Sunday Angelus.

Ahead of the International Day of Prayer and Awareness Against Human Trafficking on Feb. 8 — the feast day of St. Bakhita — Francis called for "decisive action" in fighting the "scourge" of trafficking during his address on Sunday. 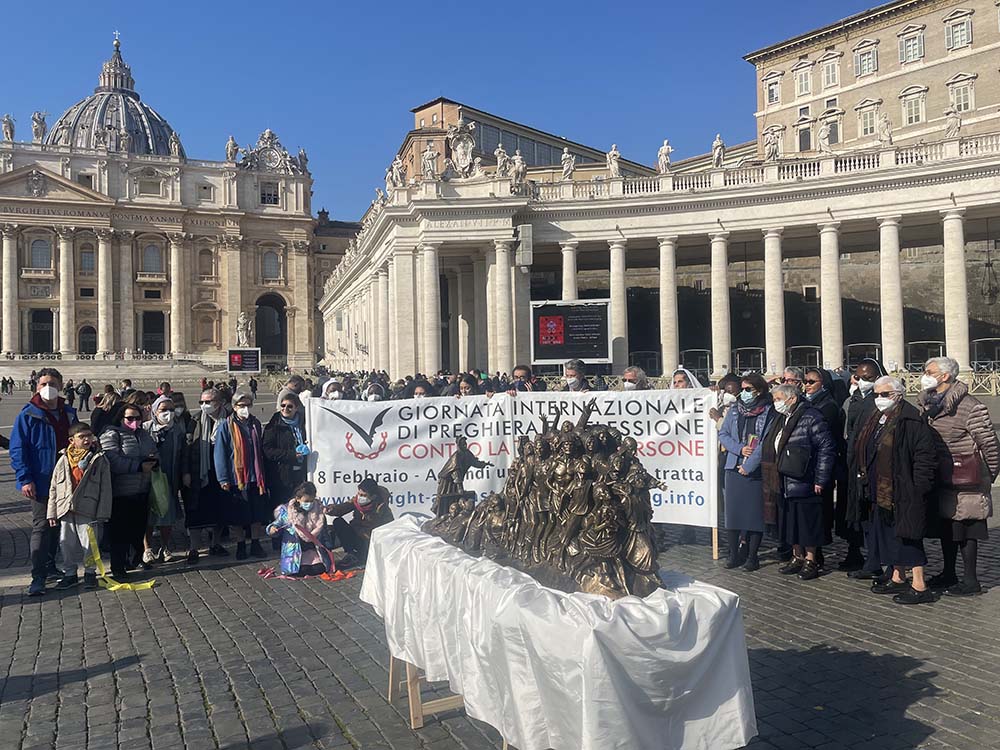 Catholic women religious and other anti-human-trafficking supporters gather with the model of "Let the Oppressed Go Free" at St. Peter's Square. Pope Francis offered his blessings to the sculpture, officially unveiled Feb. 6, and to the religious sisters on the front lines leading the fight against human trafficking. (Christopher White)

Schmalz is no stranger to the world of the Vatican. In 2019, his 20-foot bronze "Angels Unawares" sculpture found a home in St. Peter's Square, depicting migrants and refugees from different cultural and racial backgrounds. The sculpture, the first to be installed in St. Peter's in several centuries, has become an immediate favorite of pilgrims crossing through the iconic piazza, and a replica of the sculpture has toured throughout the United States in an effort to raise awareness of the plight of migrants and refugees.

Following its widespread acclaim, Jesuit Cardinal Michael Czerny, who serves as Francis' point man on issues related to migrants, refugees and human trafficking, asked Schmalz to consider another subject matter for his next project.

"Like I think so many other people, at the time I thought, well, 'What is human trafficking?' " Schmalz recalled.

He began his research and what he discovered haunted him.

According to the most recent data from the International Labor Organization, there are more than 40 million individuals trapped in modern slavery through a range of industries, most of whose faces and stories are never seen or told.

Schmalz said he wanted his sculpture to offer an accurate representation of this reality and not only show trafficking victims as young sex workers as it is often depicted in the media.

"Most human trafficking victims are not these alleged models or prostitutes that are depicted with their hands tied up," he said. Instead, he added, they are often the men and women next door.

"What this epic sculpture allowed me to do is to bring an authentic representation to what human trafficking looks like," Schmalz said. 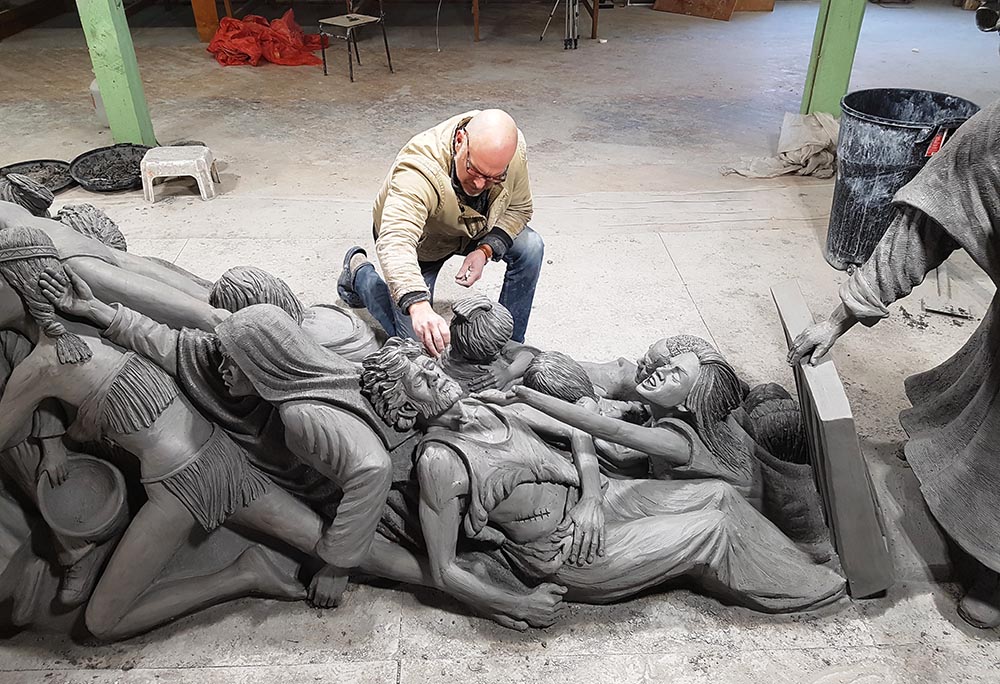 When Comboni Missionary Sr. Gabriella Bottani first saw the model of the sculpture, she made only one request of Schmalz.

Bottani, who is the coordinator of Talitha Kum, the international network of religious sisters working to end human trafficking, asked him to include a depiction of a young baby in the sculpture.

They too, Schmalz noted, are trafficked on the black market for "God knows how much money," and he hopes the sculpture helps expose that reality, as well.

If that's one dirty secret of the trafficking industry that depressed viewers, Schmalz says another secret will help provide a bit of hope: the often-untold work of religious sisters combating trafficking.

"I can't believe it," Schmalz said of their work. "They are head-to-head with probably one of the greatest evils in humanity today, yet they seem to me filled with absolute hope and joy."

Schmalz said that in the year he spent working on the sculpture, he would often become exhausted because the subject matter is so intense.

For that reason, he has dedicated the sculpture to women and particularly to religious sisters committed against human trafficking.

Bottani told Global Sisters Report she believes it will be used for prayer and contemplation, but also to raise awareness. She said Talitha Kum is working to find a permanent home for the sculpture in a publicly accessible place in the Rome Diocese.

The 10-foot model for now is currently in the chapel at the offices of the International Union of Superiors General in Rome. 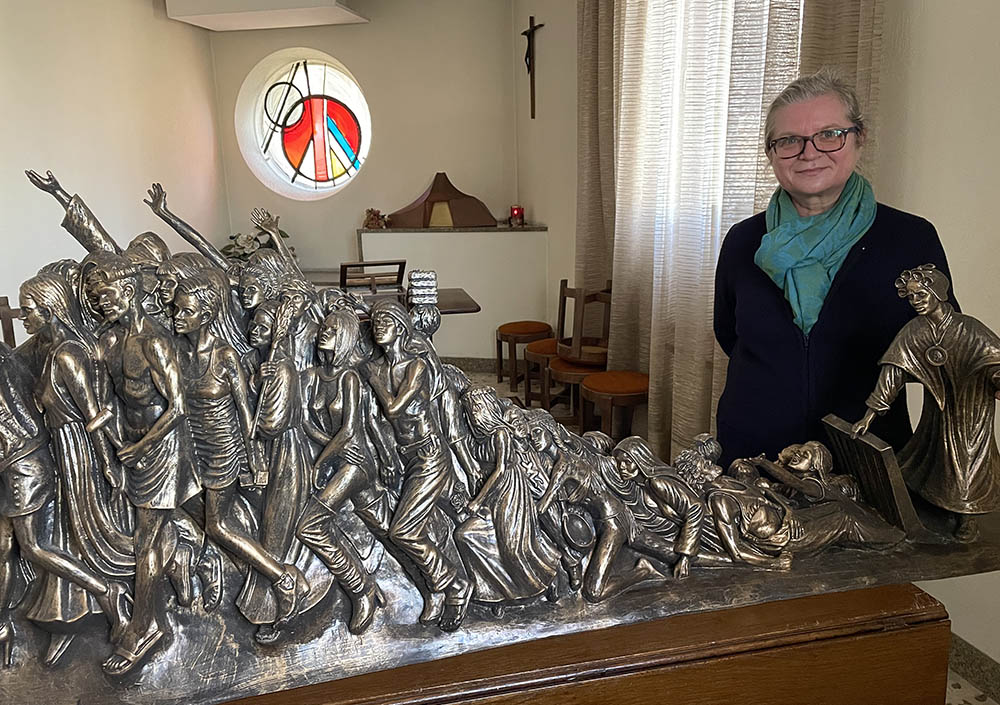 Comboni Missionary Sr. Gabriela Bottani, coordinator of Talitha Kum, the international network of religious sisters working to end human trafficking, with a model of the statue in a chapel at the offices of the International Union of Superiors General in Rome (Christopher White)

Meanwhile, Schmalz said that three 20-foot replicas are being made, and he is currently seeking support to help tour them. In addition, one will be permanently located right beside the Basilica of the Immaculate Conception on the grounds of the Catholic University of America in Washington, D.C.

"There are more than 50 images on the sculpture, which means there are 50 opportunities to learn about the realities of trafficking," said Schmalz.

Those realities are "horrific," but ultimately, he believes it is a sculpture of hope.

"It shows Bakhita opening up a manhole to the underworld," said Bottani. "She keeps it open to allow trafficking to become visible."

"Visibility is the first important step towards liberation and also the process of social integration and liberation of victims and surviving of trafficking," she noted.

Such imagery, Schmalz said, "has a shock value by showing humans coming out of the ground."

"It's the perfect image for what we hope to do," he continued, "to bring these people and this issue into daylight."

Read this next: Breaking the silence of human trafficking: Catholic sisters in Zambia speak out