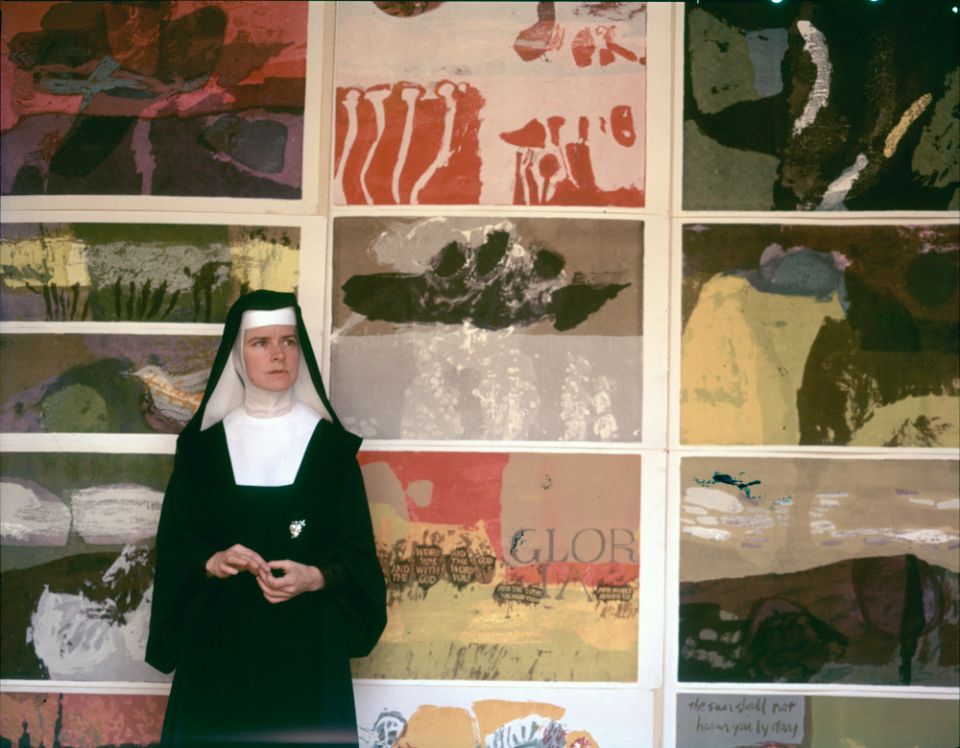 Corita Kent, known as Sister Mary Corita, in front of some of her artwork. (Courtesy of Corita Art Center/Immaculate Heart Community)

Los Angeles — The former Hollywood art studio of a Roman Catholic religious sister who was known for her pop art covering racism, poverty and misogyny appears to have been spared from the wrecking ball after all.

The art studio of the late Corita Kent, known as LA's "pop art nun," is now a dry cleaner and had been slated for demolition to make way for additional parking.

To prevent this, the nonprofit Corita Art Center and the Los Angeles Conservancy have urged the city of Los Angeles to designate the building as a historic cultural monument.

The city recommended the Cultural Heritage Commission vote against the historical designation at its Dec. 17 meeting, but the agency wound up voting in favor of it after hours of public testimony from Kent's family, former students, artists and LA residents who urged the agency to see the historical value of the structure. The application for the historic monument designation was filed by the Corita Art Center.

The cultural monument nomination will now be forwarded to the City Council Planning and Land Use Management committee for review. 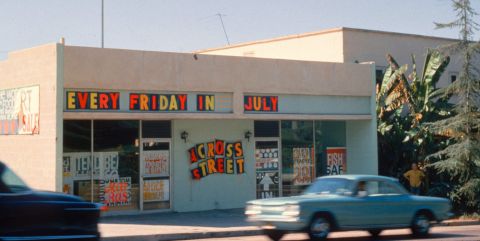 City officials said in a staff report that they were against the proposal because the building had been extensively altered, to the point where it's "unrecognizable from its period of significance." The main entrance, for example, was once a wall of storefront windows that has since been removed, and extra square footage has been added to the building.

In essence, they contended the building must resemble the art studio, where Kent produced some of her most recognizable works, in order to be eligible for historical designation.

But advocates of Kent and her legacy maintained the building must be preserved.

During the Dec. 17 meeting, Blake Megdal, the property owner and developer of the proposed development, said he would no longer pursue demolition. However, he was against the proposed cultural designation.

The application argues that the building, a humble storefront on Franklin Avenue, is the only remaining property in Los Angeles primarily associated with Kent's artistic production. It's where she produced notable artwork such as the 1965 piece "power up," which addresses social justice and equity based on a sermon by American Jesuit priest Dan Berrigan.

"It's in the art studio where art happened," said Adrian Fine, director of advocacy for the Los Angeles Conservancy. "When you don't have that connection you're missing a piece of the story." 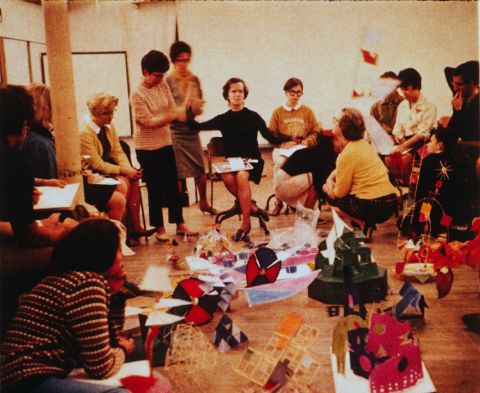 Currently, it's unclear whether Kent proponents and advocates would aim to use the building as a tourist destination or a space that showcases her legacy.

Fine said that in order to make future plans for the building, they had to first win their case to preserve the space as a cultural monument.

With only 3% of the city's historic cultural monuments associated with women's heritage, preservationists say it's even more urgent to hold on to the building that many, including her former students, still associate with Kent.

Kathryn Wollan, an architectural historian who is volunteering in the effort to save the building, said it's up to a new generation of preservationists to identify more spaces linked to accomplishments of women, people of color and the LGBTQ community.

Kent grew up in LA after her family moved from Iowa to Hollywood in 1923. The family belonged to the Jesuit-led Blessed Sacrament Parish on Sunset Boulevard, where Kent and her siblings attended school, according to the Corita Art Center. After graduating from Los Angeles Catholic Girls' High School, she entered the Order of the Immaculate Heart of Mary and took "Sr. Mary Corita" as her religious name. She graduated, later joined as faculty at the Immaculate Heart of Mary Art Department and began screenprinting as she completed her master's degree at the University of Southern California.

While working at Immaculate Heart College, Kent used the building as her primary studio space while living at the Immaculate Heart Motherhouse across the street, according to a Los Angeles Conservancy report. 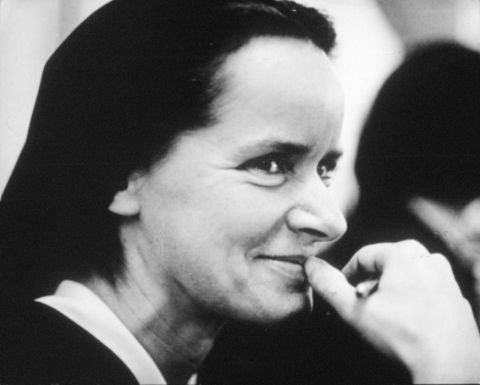 Kent's work embodied the spirit of the 1960s and was prevalent in church basements, dorm rooms and communes of people involved in the civil rights movement and the anti-Vietnam War campaign.

During this period, the Immaculate Heart College sisters "took to heart" the words of the Second Vatican Council that sought to modernize the Catholic Church by renewing and adapting "to the sign of the times," the Corita Art Center recounted in the application to preserve the building, adding that "they looked to meet the citizens of Los Angeles where they were at, physically and spiritually in their life."

Kent's fame and popularity rose as she was named one of the Los Angeles Times' Women of the Year in 1966. A year later, Harper's Bazaar profiled her as one of "100 American Women of Accomplishment." By 1968, her work was being displayed alongside that of Andy Warhol and Roy Lichtenstein.

For Wollan, saving the building "is an opportunity to preserve a tangible association with Corita's history."