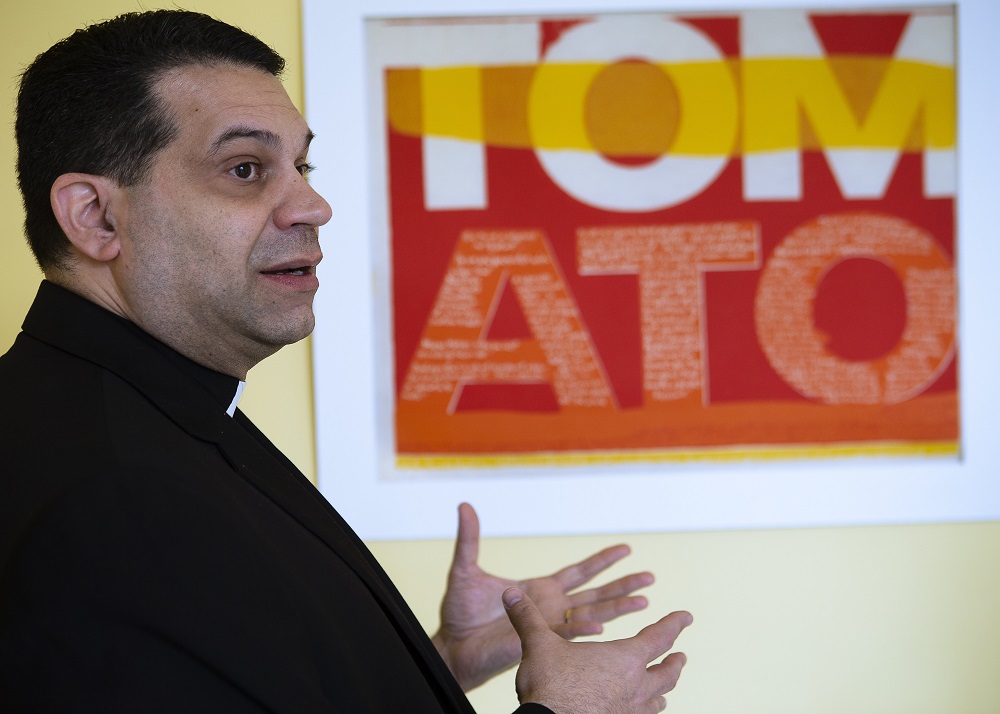 Sulpician Fr. Dominic Ciriaco, rector of Theological College in Washington, points to a serigraph by Corita Kent on Feb. 17. The piece is part of an art exhibit he put together at the college titled "Beauty and the Priest: Preaching with the Artwork of Corita Kent." (CNS/Tyler Orsburn)

Sulpician Fr. Dominic Ciriaco finds inspiration for preaching in the vibrant serigraphs of artist Corita Kent, who created art as a religious sister and later as a former religious.

And he hopes the seminarians he leads as rector of Theological College in Washington will be inspired too.

An exhibit of Kent's work currently on display at the seminary explores "how the preacher can turn to the art world for inspiration when preparing and preaching a homily."

"Her serigraphs became her pulpit as her artwork preached the Gospel and challenged people to put their faith into practice," Ciriaco said. 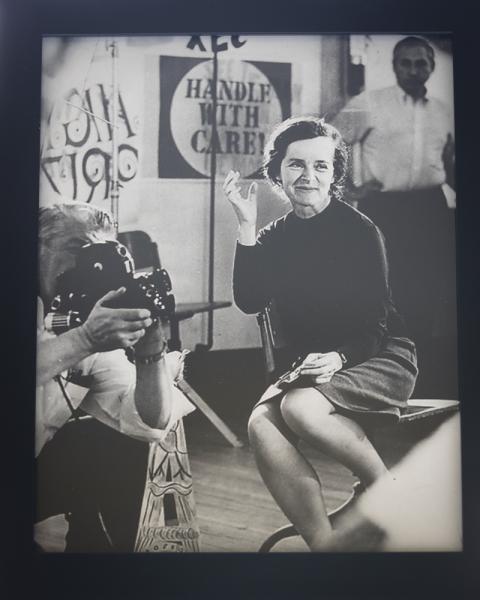 A photo of Sr. Corita Kent is seen at the Theological College in Washington on Feb. 17. Kent created art as a religious sister and later as a former religious. Her work, with its scriptural and social justice themes, was particularly popular in the 1960s and 1970s. (CNS/Tyler Orsburn)

As Sr. Mary Corita Kent, a member of the Sisters of the Immaculate Heart of Mary in the Los Angeles Archdiocese, and as a former religious later in her life, the artist used Scripture passages, psalms and messages about war and peace, love, poverty and social justice in her prints.

She also drew on the imagery of everyday products and companies, from Wonder Bread to Sunkist to General Mills.

Her artwork was particularly popular in the 1960s and 1970s. One of her creations that might be most familiar to the general public is the "Love" stamp she created for the U.S. Post Office in 1985.

Ciriaco put the exhibit together, titling it "Beauty and the Priest: Preaching with the Artwork of Corita Kent." It's a play on "Beauty and the Beast," as he explained in comments opening the show Feb. 3.

In the movie, he said, "Belle had to look beyond the exterior of the Beast to see the beauty within and the Beast likewise experienced the love and acceptance from Belle, who then began to change the Beast's disposition on life and himself. The artist's eye can help the preacher do the same with their preaching."

Creating the exhibit also fulfills one of the last requirements he needs to complete his doctorate in ministry in preaching from the Aquinas Institute of Theology in St. Louis. He had to do a thesis project on preaching geared toward his ministry, which is seminary formation.

In a Feb. 17 interview with Catholic News Service, Ciriaco said he first encountered Kent's work through his religious order, the Society of St. Sulpice.

Many of her works are at the order's provincial house in Baltimore. Others are in the archives at St. Mary's Seminary and University, run by the Sulpicians in Baltimore. The order also operates Theological College, which is affiliated with the Catholic University of America.

"I immediately fell in love with her work," said Ciriaco, who had help in pulling the exhibit together from Catholic University art students.

The artist, who died of cancer in 1986, bequeathed the pieces to the Sulpician priest who was her spiritual director, Fr. Robert Giguere. He left the artwork to the order when he died.

Kent's artistry took flight as a woman religious. She joined the Immaculate Heart of Mary community when she was 18. Born Frances Elizabeth Kent in Fort Dodge, Iowa, in 1918, she took Mary Corita as her religious name; "Corita" means "little heart."

A self-taught artist, she earned a bachelor's degree at Immaculate Heart College, which was run by her community, and received a master's degree at the University of Southern California.

She taught art classes at the college, eventually becoming the chair of its art department, in 1964.

Amid the Second Vatican Council and the changes it brought to the church, her religious community adopted reforms that put the sisters into conflict with Cardinal James McIntyre, then archbishop of Los Angeles. The dispute led to many sisters leaving; those who stayed created an ecumenical community that welcomed laypeople.

Kent took a sabbatical in Cape Cod, Massachusetts, in 1968 and decided to leave religious life. She moved to Boston and continued to create art.

By the time she went on sabbatical, Ciriaco said, she was exhausted, in part because of the labor-intensive process of making serigraphs.

In general, only one or two color applications can be made per day with long drying times in between. She chose serigraphs, though, because every image she produced was an original but affordable for those who wanted to own her work.

Ciriaco said Kent also was stressed by McIntyre's criticism of her order and her work in particular.

"Vatican II was going too fast for him," the priest said.

One image the cardinal particularly disliked and "was a scandal to him" — and one Ciriaco included in the exhibit — was a Kent print comparing Mary to a "tomato," which at the time was slang for an attractive woman.

"What a tomato! She used a slang term to give homage to Mary, that Mary is the one — the juiciest tomato of all," Ciriaco said. 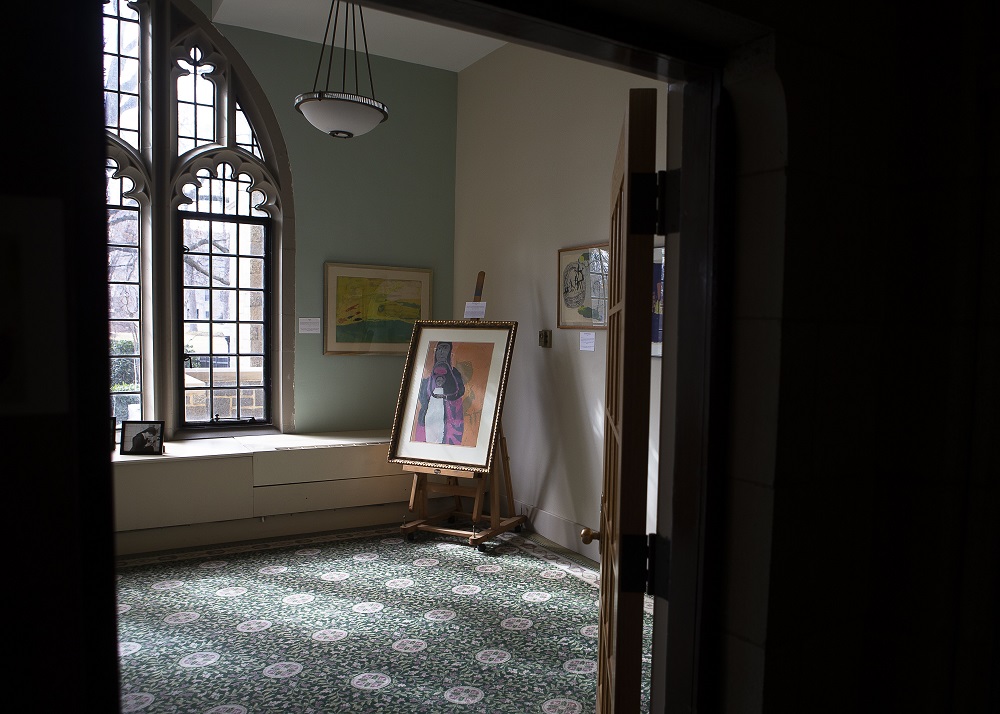 Artwork by Sr. Corita Kent on display at Theological College in Washington on Feb. 17 as a part of an exhibit titled "Beauty and the Priest: Preaching with the Artwork of Corita Kent," on display through March 3. (CNS/Tyler Orsburn)

The Theological College exhibit includes display cases with photos of Kent at various points in her life, with several of her working in her studio at Immaculate Heart College in full habit. In a couple of photos, students gather around while she demonstrates how to make a print.

The items on display include a children's picture book, Make Meatballs Sing: The Life and Art of Corita Kent, published in 2021 by Enchanted Lion, an independent children's book publisher in Brooklyn, New York.

Among the exhibit's prints is one of St. Thomas More that Ciriaco said has never been displayed in public before.

The saint was a key counselor to King Henry VIII but the king had him executed for standing firm in his Catholic faith. Kent shows him next to his famous words: "I die the king's good servant, and God's first." And he points to a cross.

Kent was inspired by Andy Warhol's famed "Campbell's Soup Cans" to create prints of everyday objects, like Wonder Bread. Other subjects include the Vietnam war as well as an homage to St. John XXIII and President John F. Kennedy.

With the exhibit, Ciriaco said he hopes seminarians, priests "and all people" will discover "the beauty of God in art and in the common everyday things in life" and "connect them to the Gospel we preach and live."