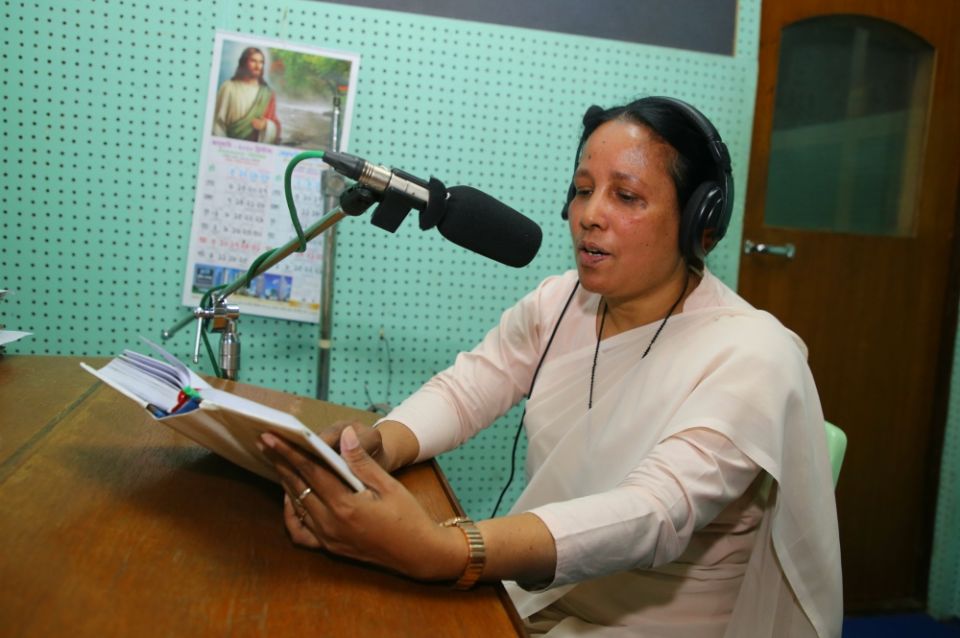 Dhaka, Bangladesh — Sr. Mary Anna Gomes, 51*, of the Sisters of Our Lady of the Missions is the popular presenter of an online radio station, Radio Veritas Asia, Bengali Service, in Bangladesh.

She has been working for Christian Communication Center (CCC), run by Catholic bishops in the Episcopal Commission for Social Communications for the last four years. At Radio Veritas Asia (RVA), she is a producer and the coordinator for the station's cultural section.

Gomes said the objective of RVA is "to present and promote the good news of Christ and the church's social teachings through social communications and to stimulate, develop and awaken the spiritual, social, civic and economic consciousness."

Recently, Global Sisters Report interviewed her at her office about making a difference in people's lives through her pastoral work, using media like radio programs.

Born in 1969* in Tuital parish in the Dhaka Archdiocese, Gomes previously worked in church-run schools as a teacher and at a girls' hostel. She said she is committed to her responsibility to preach truth, love and dialogue by using media.

GSR: How did you get involved in the Christian Communication Center?

Gomes: In 2016, I was appointed by my congregation to serve in Banideepti as coordinator. Besides that, my additional responsibility was as an accountant of five departments of Christian Communication Center. Before I joined, the RVA program broadcasted in shortwave. Now, it runs on Facebook, YouTube and the website in video and audio format.

At first, I did not want to join RVA to serve because I did not have any experience with media. Later, I saw it was the desire of God. So I joined. I asked RVA to provide me training, and they gave me the opportunity: I obtained training for two months from the Philippines on radio production. It gave me confidence. Now I am enjoying life in media.

What is your responsibility in the Christian Communication Center?

Inside of Banideepti, we have an audio-visual studio. During Christmas and Easter, CCC produces video and audio programs for state-run TV and radio stations. At that time, I work as co-coordinator to be in contact with script writers, actors and artists.

Almost every Christmas and Easter, we produce audio cassettes of hymns for Christians' spiritual care. A few months ago, the Mymensingh Diocese established its Catholic museum. At that time, we helped produce a video documentary for them. Additionally, we make audio-visual productions for special occasions, like the Year of Mercy and World Youth Day.

For RVA, I am responsible for writing and editing scripts, communicating with script writers, overseeing staff members and anchoring the program. We also make occasional programs for Eid, puja (a Hindu religious festival), and national and international days.

How do you like working for Banideepti and Radio Veritas Asia?

I do enjoy my media ministry greatly. Nowadays, social media has an instant feedback system. Viewers can make comments after we post programs on Facebook and YouTube. Around 98% of our viewers make positive, encouraging comments on our programs. They highly appreciate our radio programs. 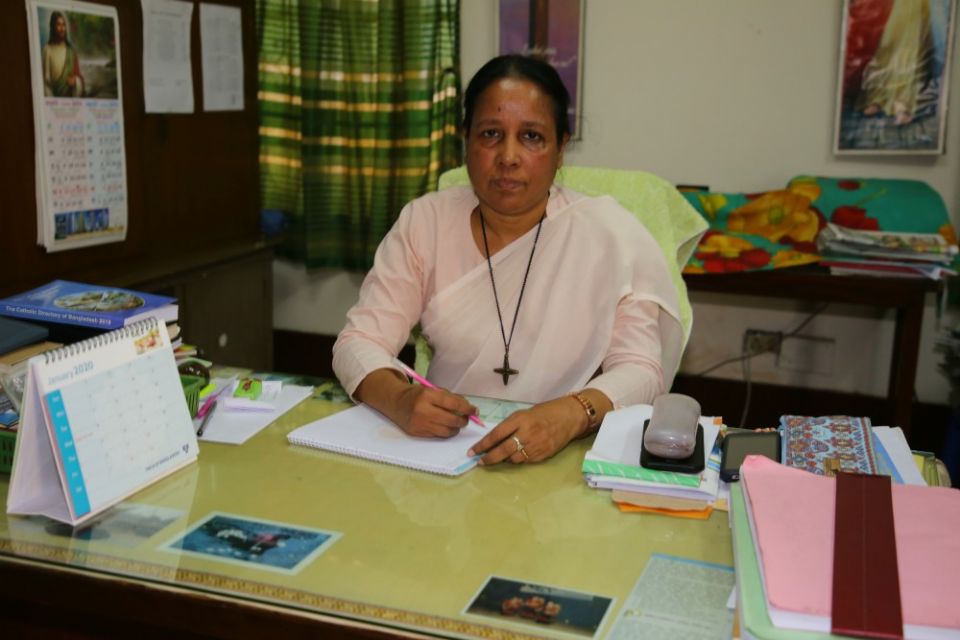 Once, radio consumers merely could listen, but now, people can watch the broadcasts via our website and social media. When I see a thousand people watch my program, share it and make positive comments, it gives me inspiration to make a better program.

Some people make negative and insulting comments purposely that get me down. It makes me hurt.

What kinds of challenges do you face?

I enjoy my work as a radio program producer, but there are some challenges. After posting a program to Facebook, the audience can comment. I follow what they say. Some audience members make negative comments, but their number is few. Some non-Christian audience members want to know how they can be Christian. Generally, we don't reply to these kinds of comments.

Some viewers try to catch mistakes on the program and make negative comments. Once, I told Fr. Augustine Bulbul Rebeiro, who is director of CCC, that I would resign from my work at RVA because of bad comments on Facebook, but Fr. Rebeiro gave me encouragement. I tried to improve my quality of work, and now, very few audience members make negative comments.

On the other hand, it seems some people want to insult me through negative comments. So it also gives me motivation to do a higher-quality program, and this is how I am overcoming that challenge. However, I get much more positive feedback.

In my past life, I never did any anchoring, but now I do. I hope it receives the blessing of God. Sometimes, I feel the audience might want the anchor to wear colorful clothes, but I have limitations as a nun. As I am a nun, I do presentation in a simple way by wearing nun's dress.

How do Banideepti and Radio Veritas Asia change people's lives?

Our radio program helps make a difference in people's lives. The motto of RVA is: "Preach the truth." As such, we have programs that focus on social and contemporary issues such as justice and peace.

Our radio programs help the audience financially, socially and spiritually. More interestingly, by watching our program on income-generating, some audience members become inspired and follow teachings from the program. They become self-reliant, and later, they send their positive feedback, including video.

How do you spread God's message through your work?

Each Sunday, we produce a Sunday homily. Different priests deliver a 10- to 15-minute sermon. Presently, many Christians cannot attend Sunday Mass because of their busy lives. Viewers share sermons on social media, and comparatively, viewership of them is better. We preach teachings of all religions. Our viewers like religious programs.

What is your plan for the future?

I am planning to make more life-related and income-generation-related radio programs so people can develop their lives and can be transformed.

Do you want to say anything else?

RVA is run by Catholic priests and nuns. If anybody wants to help us write scripts and give advice, they can help and support us. On our team in Dhaka, we have only four staff members. So we need volunteers.

*An earlier version of this Q&A gave an incorrect birth year and age for Gomes.

[Sumon Corraya is a Catholic journalist based in Dhaka, Bangladesh. He covers issues affecting the Christian community in Bangladesh.]

Q & A with Sr. Mary Mitali, training laypeople in Bangladesh for a more enlightened, participatory church

Q & A with Sr. Mary Nibedita, a Christian nurse in Muslim Bangladesh

Women of Bangladesh have narrow options for work