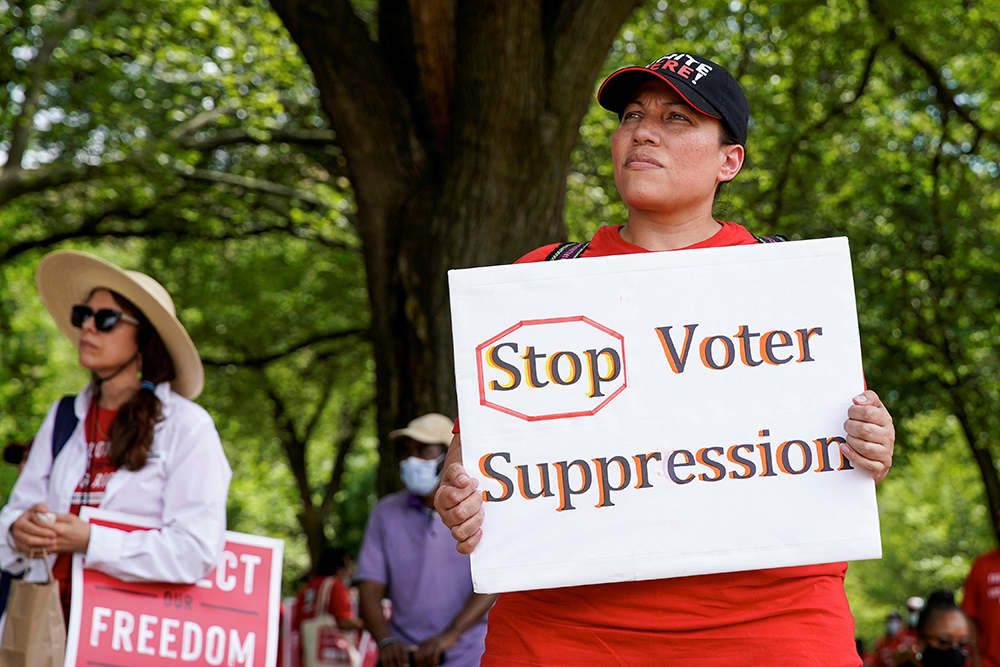 People attend a June 26, 2021, rally in Washington calling for a stop to voter suppression. (CNS/Reuters/Elizabeth Frantz)

Organizations led by women religious in the U.S. as well as other Catholic institutions denounced those who threaten democracy and efforts that make it difficult for some U.S. citizens to vote.

"Powerful institutions and political leaders are working to rig the system and erect racially discriminatory obstacles to voting and full participation in American life," they said in a Sept. 27 statement published by the Washington-based Faith in Public Life.

As midterm elections approach, they are trying to shine the light on what they see as increasing hurdles that several states have enacted, or may put in place, to make it more difficult for people to cast their ballots.

Trying to take away a person's right to vote amounts to a "sin," the statement said, citing examples such as asking for more identification, cutting back on voting by mail or groups challenging the veracity of results because they disagree with the outcome.

"Catholics must not be silent in the face of growing threats to voters, fair elections and democratic principles," the statement said. "Our faith tradition teaches that every person deserves equal access to participate fully in our democracy."

Sisters of Mercy of the Americas, the Leadership Conference of Women Religious, and the National Black Sisters' Conference were joined in signing the statement by other Catholic organizations such as the Association of U.S. Catholic Priests, Network, Pax Christi USA, Franciscan Action Network and Maryknoll Office for Global Concerns.

"So many people struggled and died to secure the Voting Rights Act of 1965, and those victories are now threatened today," said Sr. Carol Zinn, a Sister of St. Joseph of Philadelphia, who is executive director of LCWR.

"We must rise to meet this challenge with the same moral courage and persistent advocacy characterized by those who refused to accept white supremacy and Jim Crow laws," she said in a news release on the groups' statement.

The obstacles, the groups said, primarily affect voters of color and negate rights long fought for in the United States.

"As a Black Catholic and an American, I believe we dishonor the legacy of courageous activists and faith leaders who were beaten and often killed fighting for the sacred right to vote when we fail to challenge those undermining our democracy today," said Fr. Bryan Massingale, a Milwaukee archdiocesan priest and a professor of Christian ethics at Jesuit-run Fordham University.

"The connected threats of Christian nationalism, political violence and racist voter suppression are not new, but they must be confronted again with moral clarity," the priest said. "I urge our bishops, my fellow priests and all Catholics to speak out more boldly."

The rise of what some call "white Christian nationalism" involved in the efforts is "heretical to authentic faith" and "a clear and present danger to building a multi-faith, multiracial democracy," the groups' statement said.

Greenfield of DeSales University said leaders in Catholic higher education have a vital role to play in advocating for equal access to the ballot.

"When those in power make it harder to vote and even deny the results of fair elections, the foundations of our democracy are threatened," he said. "Catholic social teaching tells us that all have a right to and responsibility for active participation in society."

He added, "We are called to work for an inclusive democracy where all Americans can participate in civic life."