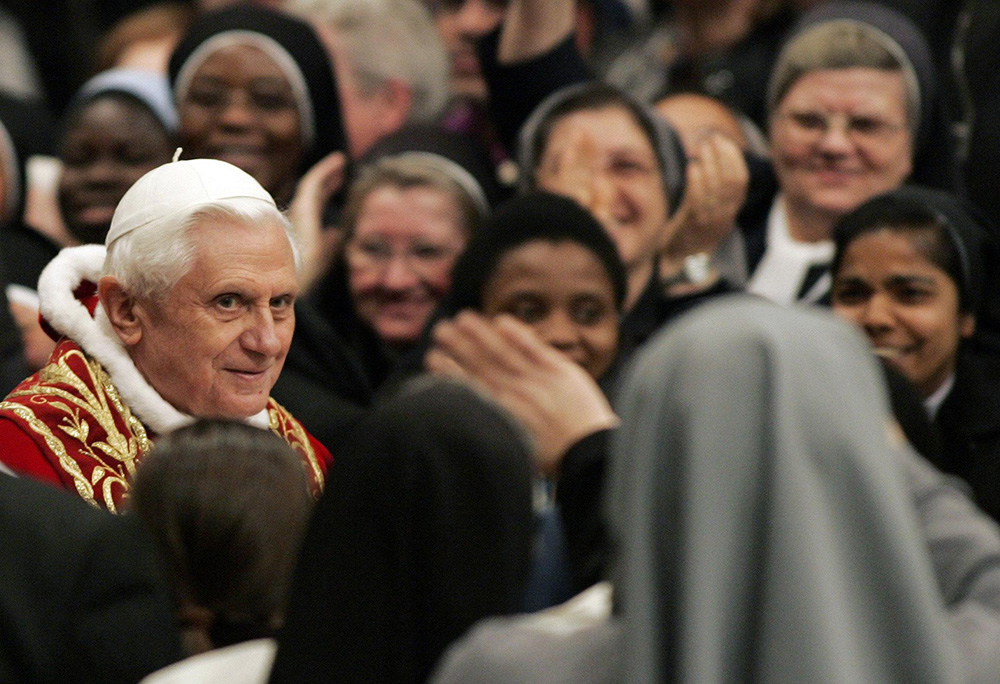 Pope Benedict XVI greets nuns as he arrives for a special Mass for consecrated men and women Feb. 2, 2007, in St. Peter's Basilica at the Vatican. (CNS/Reuters/Dario Pignatelli)

Prominent Catholic sisters, some affiliated with U.S.-based organizations subject to Vatican investigations during the papacy of Pope Benedict XVI, are mourning Benedict's death and praising his life of scholarship, spirituality and service.

"We thank the Lord for the wisdom and humility with which he accompanied the People of God and for the witness of love with which he sustained the path of the church by giving his life during the years of his pontificate," Sr. Nadia Coppa, an Adorer of the Blood of Christ and president of the International Union of Superiors General, said in a statement Dec. 31, the day of the late pope's death.

In joining "the choral prayer of the church for our dear Pope Emeritus Benedict XVI," Coppa said on behalf of Rome-based UISG, "we raise to God our praise for the dedication and care he reserved for religious life and for the prophetic thrust of his magisterium that will remain in the memory of us all."

"May he now sing with all the saints the glories to the Paschal Lamb who created and redeemed him and by whom he allowed himself to be transfigured."

The U.S.-based Leadership Conference of Women Religious said in a Jan. 3 statement:

We are grateful for his long life of service to the Catholic Church and respect how he integrated his experiences in the Nazi regime in Germany, his service in World War II, and his work as a theologian and professor into his papacy.

His depth of scholarship and his understanding of the human condition led him to make contributions that will be long valued in the church. May his passing remind all of us of our responsibility to care for the marginalized and work to close the gap between rich and poor as Pope Benedict did tirelessly with great courage and faith.

Sr. Carol Zinn, a member of the Sisters of St. Joseph of Philadelphia and LCWR executive director, was among a number of sisters who praised Benedict for his decision to leave the papacy in 2013, making him the first pope to do so in 600 years. 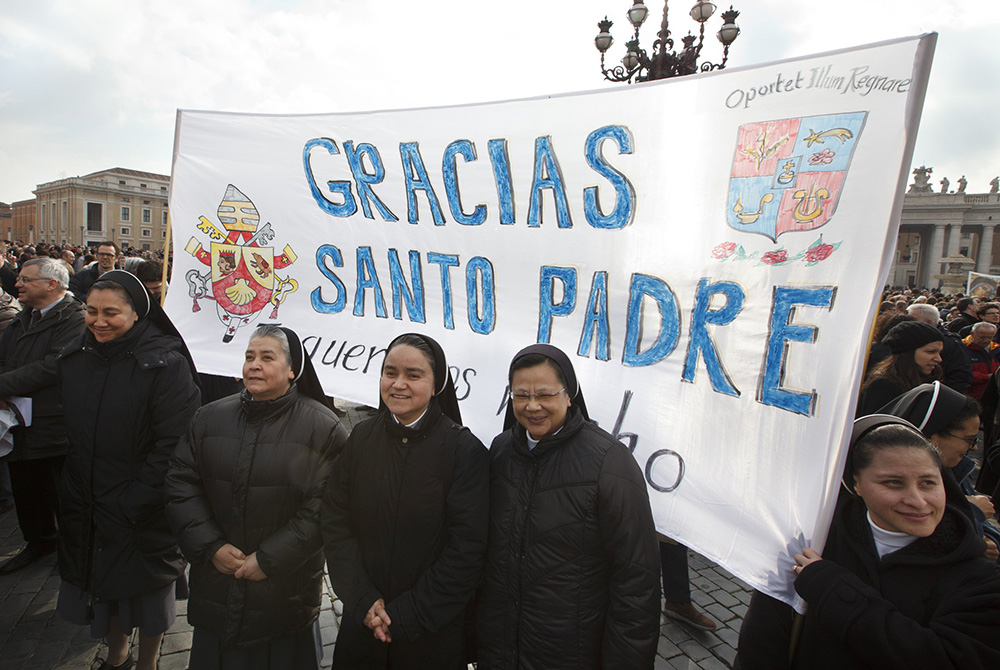 Nuns hold a banner thanking Pope Benedict XVI before he delivers the Angelus from the window of his apartment overlooking St. Peter's Square at the Vatican on Feb. 17, 2013, a week after he had announced his resignation. (CNS/Paul Haring)

Zinn said Benedict was known for being reflective rather than reactionary, and that reflection led him to resign.

"It came from that same deep place of his reflection on his own life and what it meant for him to be faithful to his position," Zinn said in an interview with Global Sisters Report. "He did not want to repeat what John Paul II had done" and remain in office long past he was physically able to do so.

Benedict was known as a conservative and was pope at the start of the doctrinal assessment of LCWR, the Resource Center for Religious Institutes, and Network, a Catholic social justice lobby, in 2012. An apostolic visitation examining all sisters in the United States began in 2009.

But Zinn said it is an oversimplification to solely blame Benedict.

"That whole situation was way more complex and way beyond any one person," Zinn said. Instead, "over the years, a feeling arose about LCWR in particular and American sisters in general, and that feeling got institutionalized."

She said she doesn't think even Benedict "had all the pieces as it was unfolding. It was over a number of years with a lot of people involved. To even make a connection to himself and the sisters in the United States is shortsighted and not appropriate. What's needed now is to recognize this person's gift to the church."

However, Sr. Simone Campbell of the Sisters of Social Service, who was executive director of Network during the doctrinal assessment, said the three-year ordeal would not have happened if Benedict had not been pope.

"He didn't have a clue about us," Campbell said in an interview with GSR. "I don't think Benedict thought of change. He thought of preservation, and change scared him, and that's why the sisters in the United States scared him."

Campbell said it is true Benedict did not instigate the investigation, but he allowed it to happen and maintained the culture that spawned it.

"It was more about the U.S. hierarchy and their allyship with Benedict," Campbell said, noting that the doctrinal assessment came after thousands of sisters publicly supported President Barack Obama's Affordable Care Act, which the bishops opposed. "I don't understand an allegiance to a structure because for me, it's all about allegiance to the Gospel."

Sr. Rebecca Ann Gemma, a member of the Dominican Sisters of Springfield, Illinois, and current LCWR president, said that however the doctrinal assessment and apostolic visitation began, the Holy Spirit used them for the good of the church and for Catholic sisters. 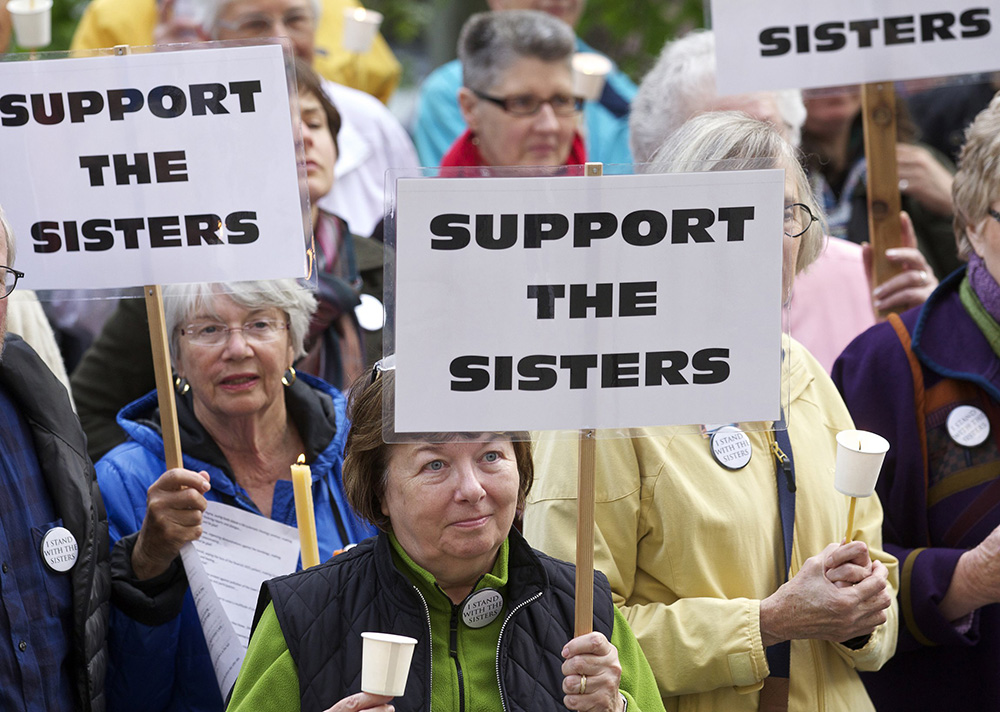 Jenner Mathiasen, center, of Seattle takes part in a May 8, 2012, vigil outside St. James Cathedral in Seattle to support sisters against the Vatican's call for a reform of the Leadership Conference of Women Religious. (CNS/Stephen Brashear)

"That experience really made women religious explore their charisms, their relativity and, honestly, their own individual relationships with the church," Gemma said in an interview with GSR. "And because of that, I really believe we became stronger in our commitment to the call to live the Gospel message."

She said that, without that experience, "I don't know that we would be where we are today, even in how we collaborate with one another."

Gemma said every pope leads a complex institution in a complex world.

"I believe so strongly in the intercession of those who've gone before us, so I've been praying to Benedict that he intercede for us to have the wisdom we need at this time — not just LCWR, but women religious and the whole church," she said.

Sr. Sharon Holland of the Sisters, Servants of the Immaculate Heart of Mary, a canon lawyer who served as a staff member of the Vatican's Congregation for Institutes of Consecrated Life and Societies of Apostolic Life from 1988 to 2009, was president of LCWR when the doctrinal assessment ended in 2015.

She told GSR in an email that Benedict "was a man of great faith and great intellect. He was a theologian and scholar, while also a humble man, able to listen. These qualities continued into his papacy," Holland wrote. 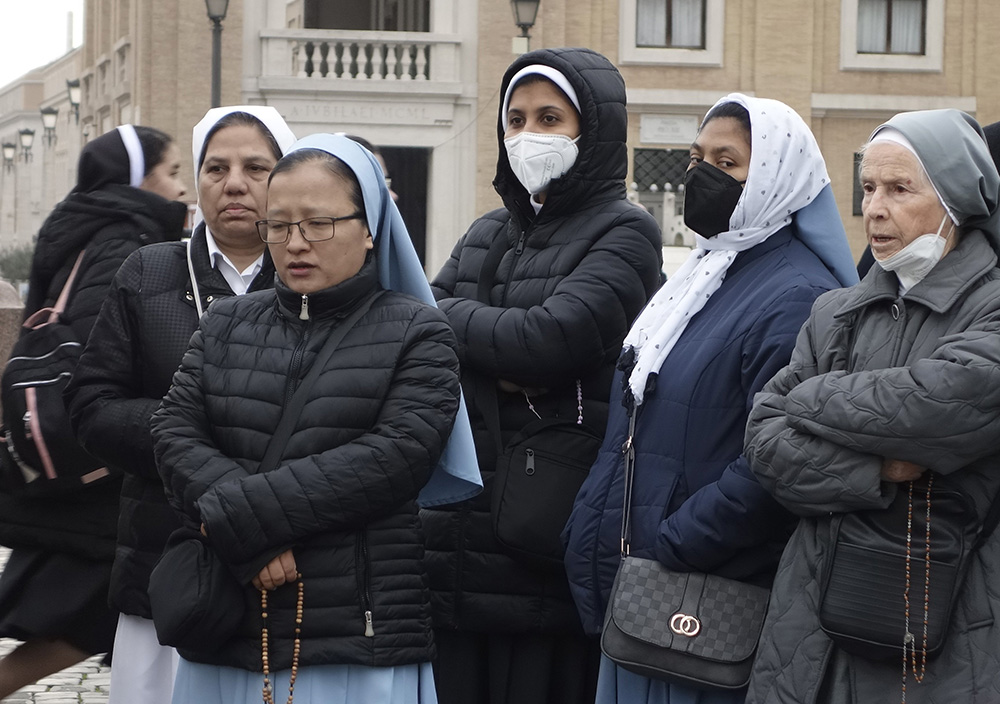 Nuns wait in line to enter St. Peter's Basilica to view the body of Pope Benedict XVI at the Vatican Jan. 2. (CNS/Jennifer Haring)

"His writings will continue to be valuable to religious and to theologians moving into the future. A unique piece of Benedict's history will also be his decision to resign the papacy, and to spend his last days in the monastery on the Vatican grounds. Indeed, a great man of the church!"

Sisters based at the United Nations took note of the late pope's many complexities and uniformly praised his decision to leave the papacy.

"He knew his physical limitations," Adrian Dominican Sr. Durstyne Farnan, U.N. representative for the Dominican Leadership Conference, wrote in an email to GSR. Stepping down from the papacy "was an important moment in his papacy. He will be remembered for this precedent in the church."

"It paves a way for any pope in the future to do likewise," she added. "Perhaps this is one of the additional gifts Benedict leaves the Church today as well."

"John Paul visited over 120 countries in his lifetime. And Benedict did not. John Paul was an extrovert and Benedict not. He was an accomplished pianist and scholar," she wrote. "In many ways he was the opposite of St. Pope John Paul. Yet he led the church the best way he knew how."

Farnan said Benedict will be remembered "as a shy scholar who led the church for eight years. He was a student of the Word and desired to know Jesus intimately, thus his three volume work on Jesus. He is now with the God he desired to serve faithfully in his life on Earth. May he rest in peace."

In an email, Sr. Winifred Doherty, an Irish sister and the main U.N. representative of the Congregation of Our Lady of Charity of the Good Shepherd, praised parts of Benedict's encyclical Deus Caritas Est ("God is Love"), published in 2005.

In that document, Benedict acknowledged the exploitation posed by prostitution and highlighted what Doherty called "the relationship between the necessary commitment to justice and the ministry of charity."

Similarly, Zinn said she most appreciated Benedict's intellect, especially as it was exhibited in his three encyclicals, which she said makes theology so simple it becomes profound. That was particularly the case with Deus Caritas Est, she noted.

"He just could not get over the love that God lavishes on all of humanity and that our mission is to turn around and lavish that love on God and each other," Zinn said. "He had this global sense of the love of God."

This story appears in the The Ratzinger/Benedict XVI legacy feature series. View the full series. 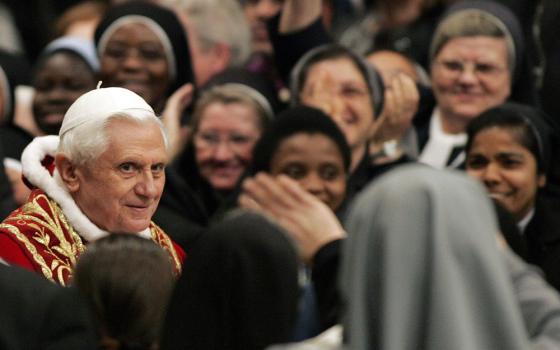