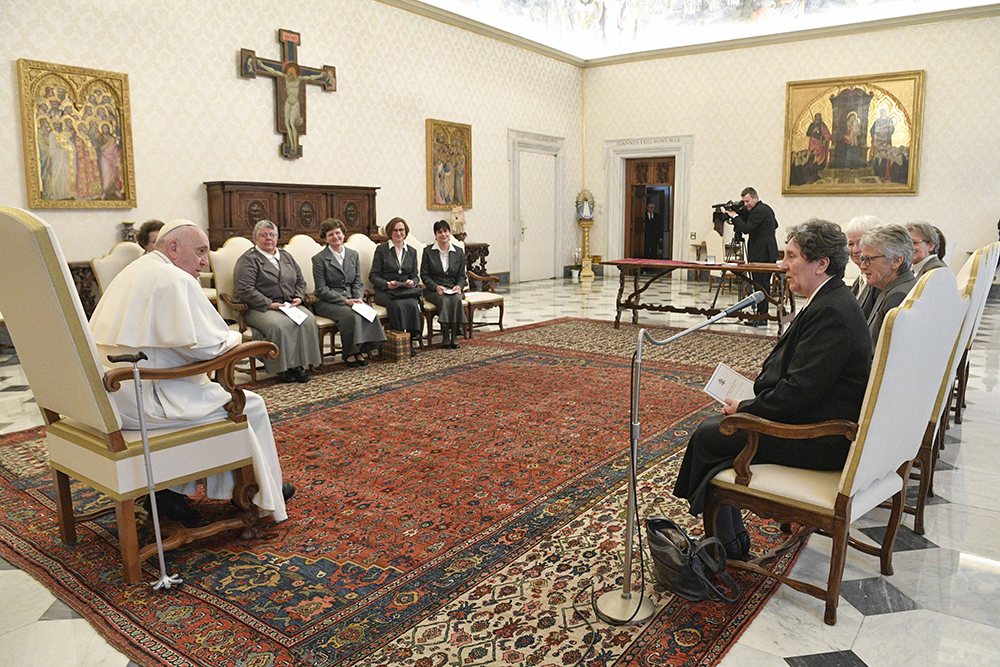 Pope Francis meets with a group of Sisters of Social Service on Jan. 20 in the library of the Apostolic Palace at the Vatican to marck the 100th anniversary of the founding of the order. (CNS/Vatican Media)

"May God give us the strength to be witnesses of that love, of that truth and of that justice in living the vocation to which he has called us," he said in a text given to members of the Sisters of Social Service, who had an audience with the pope Jan. 20 at the Vatican.

The order, which was celebrating its 100th anniversary, was founded by Sr. Margit Slachta in 1923 to respond "to the needs of those who were socially, economically and politically powerless," according to the order's website. The sisters "believed that they should not only work to heal the wounds of society but should spend their lives trying to change the conditions that caused the wounds," it said.

In his written greeting to the sisters, the pope told them, "We can see that the charism received 100 years ago by your foundress, Margit Slachta, has been applied over time and through the church's social teaching to different political and social situations, up to the present day."

"I am impressed that your foundress was actively engaged in societal issues even while living the consecrated life," he wrote.

"What is particularly inspiring is her declaration during the Holocaust that the precepts of the faith obliged the sisters to protect the Jews, even at the risk of their own lives," he wrote.

Slachta, who was the first woman to be elected to the Diet of Hungary in 1920, was actively opposed to anti-Jewish laws and policies. It is estimated the sisters rescued more than 2,000 Hungarian Jews, and they used films, lectures and other means to counter Nazi propaganda and teach that God's laws, especially the Christian principle of universal love, should guide people's actions.

Slachta, who died in Buffalo, New York, in 1974, was recognized as Righteous Among the Nations, and Sr. Sára Salkaházi, who was executed by far-right militants for sheltering Jews, was beatified in 2006.

Pope Francis told the sisters in his text that "this is a truth that we find difficult to admit: many martyrs died for the faith, not because they were denied the freedom to worship their God, but because of the coherence of life that this faith imposed on them, thus making it a defense of freedom, justice and truth."

The first evidence of this, he wrote, is the martyrdom of St. John the Baptist, who "died for admonishing the tyrant for not living according to divine law and for inviting the people to renounce the perverse system that distanced them from God's will."

The saint, he wrote, "was a witness — martyr — to the Truth with a capital letter."

"Our current time is no different," the pope said, "and today, as in the past, the call to be witnesses is still necessary."

He urged them to let Slachta's teachings fill their hearts "with the same intensity with which they surely did in the first sisters of your community."

"They are an inspiration to you, teaching you to face social challenges, like those sisters did against Nazism, with only the weapon of charity."

"Dear sisters, your foundress, the church, the Holy Spirit challenge us by always repeating the same truth that there is no greater love than giving one's life for others," the pope wrote.

Read this next: Re-interment of Sisters of Social Service foundress in Hungary pays 'homage to her spirit'