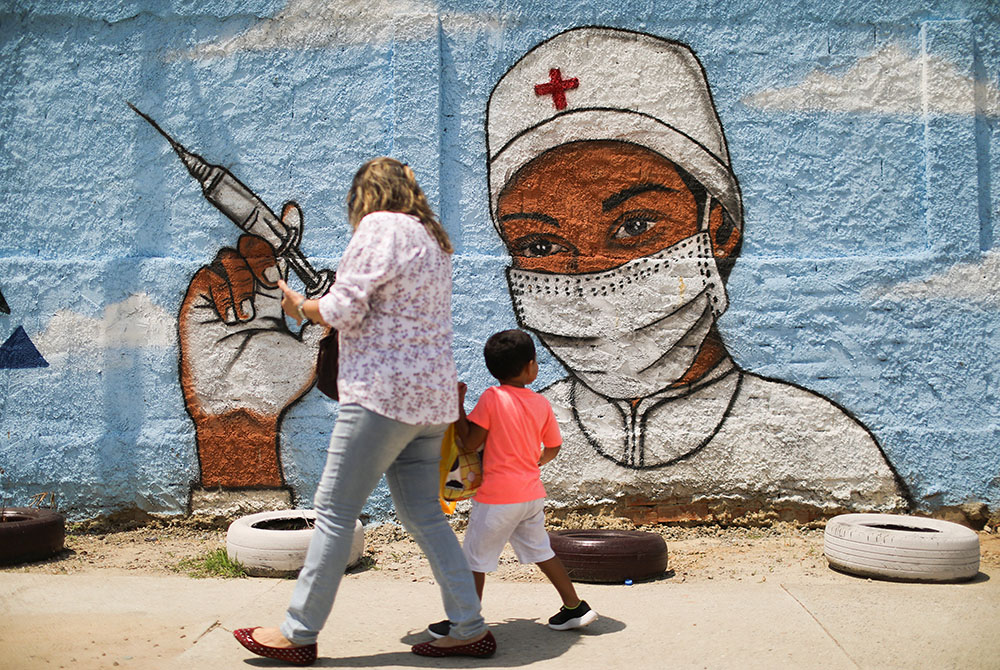 A woman and child walk past a painting on a wall March 12 in Rio de Janeiro during the COVID-19 pandemic. (CNS/Reuters/Pilar Olivares)

As of late September, Brazil was experiencing what Reuters reported was "the world's third worst outbreak outside the United States and India and its second-deadliest after the United States." The country was approaching 600,000 deaths.

When the COVID-19 pandemic hit, we Sisters of St. Joseph of Rochester missioned in Brazil sprang into action to help our communities in any way possible. We partnered with others to bring food to those in need and help get masks to health care workers. As cases and deaths continued to rise across the globe, the pandemic soon turned personal for us.

Every day we hear of members of our church communities, relatives of our sisters, or a friend's mother or brother who is sick, or in the hospital, or has died of COVID-19. That's why the two of us, Maureen Finn and Joana Mendes — who live in the city of Goiania in central west Brazil — are now contributing to the country's vaccination efforts.

As a social worker in Brazil's public universal health system, Joana knew that when the vaccine rollout began in Brazil in February, a program was already in place to immunize the entire country within months, and hoped for the best. The National Immunization Program is the agency that oversees vaccinations in Brazil. It is considered one of the most modern and advanced in the world, and one of the great virtues of the program is that it has the capacity to reduce regional and social inequalities.

The vast knowledge and practice of vaccination in Brazil could have facilitated the organization and expansion of the COVID-19 vaccination campaign. (As of Oct. 6 Brazil has provided enough vaccines for about 57.5% of the country's population, 242,736,755 doses.)

Unfortunately, there was a significant delay, but it was not due to the lack of interest of the population in general. President Jair Bolsonaro refused to get vaccinated, denied the seriousness of the health crisis and discredited scientists — despite having COVID-19 himself. As Reuters reported, When he went to give a speech on Sept. 21 at the United Nations, Bolsonaro defied U.N. rules requiring that all those attending the September U.N. meeting be inoculated. His health minister tested positive for COVID-19 and had to stay in quarantine in New York; on his return to Brazil, Bolsonaro and his team went into a 14-day isolation.

As countries around the world began to immunize for COVID-19, people in Brazil soon learned their government had not been ordering vaccines. Joana noted that the current congressional hearings on the pandemic uncovered that Pfizer had sent at least six emails to the Brazilian government in 2020 offering to sell them the vaccine. However, the emails were ignored. State governors have been uniting to try to purchase vaccines for their states, in the face of no federal leadership, and Brazil's minister of health has changed four times during the pandemic.

Despite the hurdles, we have continued to actively encourage and support others in getting the vaccine as it becomes more available. Joana* volunteers at a vaccination clinic alongside students from the Pontifical Catholic University, which created a task force to immunize people and record vaccination data; the experience has been an emotional one.

Welcoming people to receive a "dose of hope," as we see the COVID-19 vaccine, has been simply amazing. We see people like 76-year-old Dona Joana — who arrived very early dressed in a T-shirt with an image of Our Lady of Aparecida, the Patroness of Brazil — expressing gratitude, and, in tears, sharing how happy she was to know that in a few weeks she could see her children and grandchildren whom she's not seen for over a year. Another woman knelt on the ground to pray as she received her "hope and life shot" while praising the health care workers and science.

And while the health care workers have been pivotal in helping stop the spread, they, too, have been overwhelmed with emotion while getting vaccinated. Maria Luisa, in tears, expressed her joy and yet sadness that she felt privileged to be getting the vaccine ahead of so many people. Thiago Augusto reported, "Being vaccinated is exciting, mainly because we know of the need for people to have access to this vaccine. It is a feeling of gratitude mixed with the anxiety and concern that all people can get vaccinated and return to a normal life."

For many, however, that "normal life" now includes the loss of loved ones from the novel coronavirus.

In mid-May, Maureen learned that a family she had known for over 15 years — since becoming a pastoral presence in their small church community — was hit hard by COVID-19. Four adults and three adolescents in the family tested positive for the virus. With the father of the family still refusing to get vaccinated, his daughter asked her to try to persuade him otherwise. When she arrived at their home on a Sunday before Mass, the father was alone, pensive and standing in front of his home. They talked about his children and grandchildren sick with the virus, and he was clearly worried but full of faith. When she asked if he had been vaccinated and he said no, his reason surprised her. He said, "It's not right. I don't want to use a vaccine when those who have to leave home and go to work can't get vaccinated. They did this wrong, starting with the elderly. Vaccines should have started with those who have to go to work every day."

Maureen offered the father some other points of view, saying even the pope, who is very generous and tells us not to be individualistic, got vaccinated. She listened, spoke her piece, but the father continued to believe he shouldn't get vaccinated.

Just days after that exchange, sadly, the man's son died from COVID-19. We both went to the family's home the following Sunday to express our sadness. Before we left, the father made a point of saying that he was now considering getting the vaccine.

It's noble of him to want essential workers to receive the vaccine before he does, but what we all should understand is, by getting vaccinated, regardless of what order, we are helping each other live safer, happier lives.

The great need to get vaccines to protect people from COVID-19 leaves us feeling anxious, frustrated and wanting to give "a dose of hope" to people who are suffering the consequences of the pandemic, of social inequalities and governmental indifference.

[Maureen Finn has lived in Brazil since January 1984, after doing parish work in Selma, Alabama, for 8 years. In Brazil she has done pastoral ministry in small communities in central west Brazil, and currently is the regional coordinator for the Conference of Brazilian Religious in the state of Goias. She lives in community with Joana Mendes and three other Sisters of St. Joseph of Rochester.]

[Joana Mendes, Brazilian, entered the Sisters of St. Joseph of Rochester in January 1984.  She is a social worker and dedicates her time to supporting citizen participation in local health councils. She is a pastoral agent and works as a translator for other congregations.  She lives in community with Maureen Finn and three other Sisters of St. Joseph of Rochester, near the state capitol, Goiania, Goias, Brazil.]

*Due to an editing error, the wrong name was given when this column was first published. It has been corrected.