by Martha A. Kirk
Coronavirus
Spirituality 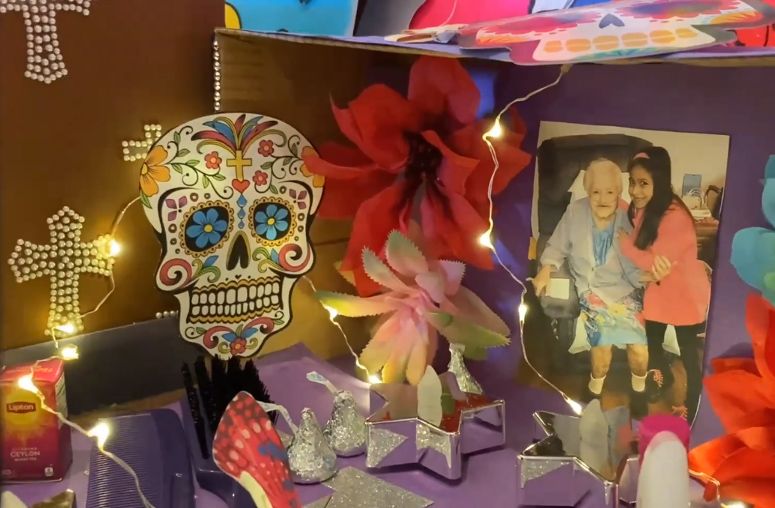 A student shares her ofrenda altar in memory of her grandmother during a Dia de los Muertos virtual gathering of the Incarnate Word family last fall. (Screenshot by Martha A. Kirk)

On Feb. 3, our local paper reported that we had more COVID-19 deaths in January than in the summer spike, bringing the county's total deaths to more than 2,000. In our ongoing grief, it has helped me to remember the special gathering we had last fall for "Day of the Dead" (Día de los Muertos) in San Antonio, our largely Hispanic Texas city.

"Mi ofrenda es para mi abuelo." "The day of the dead altar display is for my grandfather," the high school student explained. In the prayers the students of St. Anthony Catholic High School created, they spoke to those in the communion of saints with deep love and familiarity. "You can hear me now that you don't have to have a hearing aid." "Come to all of my baseball games now."

The global pandemic is leading us into the communion of saints in ever deeper ways. Our sisters, associates, students and friends do not have to be bound by space and time — we can bring words of compassion, encouragement and wisdom directly to each other on any day, not just on All Saints'/All Souls' Days (the usual time for Dia de los Muertos south of the border). Almost 100 gathered in a big "Zoom room" — from some 80-year-old Sisters of Charity from our retirement center, to the high school student who cried as he spoke of his grandfather.

Three of us from the University of the Incarnate Word — Gabriel Saxton-Ruiz, Yesenia Caloca and I — were working with Centro Incarnate Word, our Mexico City branch, to further the Charter for Compassion and lead our students into more civic engagement through service in March 2020. We invite students to empathy, but with compassion people realize a sense of agency. 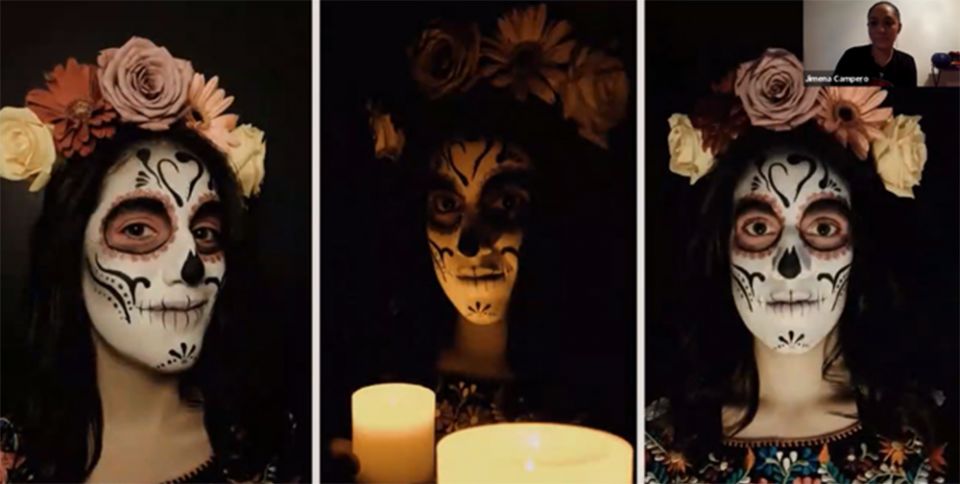 Lovely young people were transformed by makeup into eerie Catrinas, the personified figures of Dia de los Muertos. (Screenshot by Martha A. Kirk)

The founding call of the Sisters of Charity of the Incarnate Word is "Our Lord Jesus Christ suffering ... seeks relief at your hands." Those early sisters experienced more than 10% of the population dying of plagues in the mid 1800s.

Little did we know that within a week our world would flip over with fear of death from an uncontrollable disease, and a mandate to educate online rather than in person. The pandemic began to transform us. The "Incarnate Word family" — not only a few hundred sisters and associate members, but a network of 47,000 co-ministers in education, health care and other services — can be and needs to be in closer relationship.

More than a dozen teachers, campus ministers, and civic center staff — with help from the University of the Incarnate Word — met on Zoom and spoke of the value of facing death and compassionately comforting each other. Devoted teachers began inviting students to creative activities and dozens of students in our schools responded.

Remembering the dead led to an outpouring of creativity by the living: Incarnate Word Sr. Katty Huanuco from Peru (director of the Incarnate Word sisters' Justice, Peace, and Integrity of Creation Office), and high school and university students from the U.S. and Mexico.

University of the Incarnate Word doctoral student Sr. Adriana Calzada shared grim numbers of those who have died of COVID-19 all over the world and in each of the three countries of the people participating.

Sister Katty explained that the capitol city of Peru has a mixture of cultures from Europe, Africa and Asia, with the traditional cultures of the Andean highlands, the Pacific coast and the Amazonian rainforest.

The Andean communities mark the first day of the month of Aya Markay Quilla (November), the month dedicated to ancestors. The Dia de los Muertos includes customs that even predate the Inca culture. In homes, families have a "table of honor" decorated to welcome the spirits of those who have died — they include pictures of the deceased, flowers, fruits, sweets, coca leaves, and the special bread for the day called wawa (a Quechua word). Quechua is the first language of Sister Katty's family, who came from the Andean highlands. She shared a picture of wawa that her father had baked that day.

The youngest group sharing, St. Anthony Catholic High School, had touching memories of relatives. All gathered in groups of three or four with both the challenge and the opportunity of being with strangers who might only know one language.

Since a number of Incarnate Word sisters from Mexico were participating, their words affirming the students' fine work were especially meaningful. Mexican Sr. Lupita Ruiz spoke about how important it is to save our roots; this gathering was a marvelous opportunity to do that.

The community of Incarnate Word University Bajío in Irapuato, Mexico, made a film about calaverita literaria — texts in verse that began to be written during the 19th century. This literary form has developed to talk about death with a sense of humor. Whether one approaches this through psychology or theology, calaveras can encourage emotional and spiritual health. 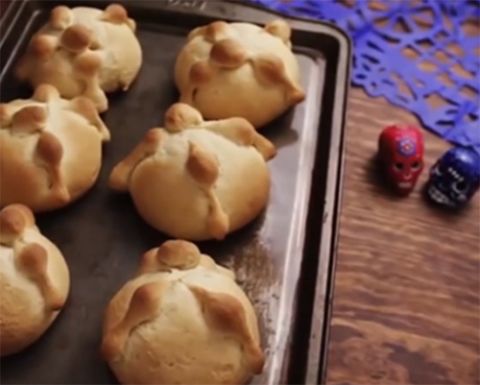 Students taught us how to make pan de muerto, adding each ingredient, kneading and shaping the "bones" that decorate the top of this sweet bread. (Screenshot by Martha A. Kirk)

The students shared thoughtful verses that they had written in creative ways. Their music ensemble played for us and the students taught us how to make pan de muerto, adding each ingredient, kneading and shaping the "bones" that decorate the top of this sweet bread.

From students and faculty of Centro Incarnate Word in Mexico City, we learned that in their cosmopolitan city many customs and cultures have blended. Halloween from the north meets indigenous traditions from the south. Incarnate Word sisters who have members from Limerick, Ireland, heard Mexican students creating limericks about Halloween! We watched as lovely young people were transformed by makeup into eerie Catrinas, the personified figures of Dia de los Muertos.

Saxton-Ruiz introduced the San Antonio campus where we teach. He reminded me of when I was doing research in Mexico and in the 1970s began taking students there to learn with our Mexican sisters. Among indigenous people in Vera Cruz, we learned to live closer to nature, to cherish family, to live with little, and to be resilient.

As students of our San Antonio location shared stories of beloved relatives, we were reminded that some were born south of the border, and many have parents or grandparents from there. The invisible lines or borders seemed to disappear as we know ourselves more as "Incarnate Word family" united in compassion.

All were invited to plant a Compassion Tree in memory of this gathering, since trees produce oxygen and help prevent climate change. We discussed in small groups how as part of the Incarnate Word family in different countries we might unite more in compassionate action to further the Charter for Compassion.

Sr. Leticia Rodríguez shared, "This gathering was so beautiful and creative, especially as we shared with the students."

She believes that we can help make a more compassionate world by "being more aware of our racism, unconscious and conscious. Being more inclusive, respectful and welcoming of people who think, look and are different to me."

Lucia Tinoco — a teacher in Bajío — wrote, "Community is created from compassion."

Let us compassionately unite with the communion of saints every day of the year. 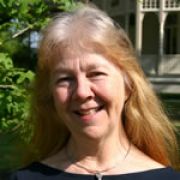 Coronavirus | May the communion of saints bring us comfort!

Workforce program moves people up out of low-paying jobs

Presence: You gotta be there

In praise of a snail's pace

Learning from COVID-19 that we are not alone, but there is much separation