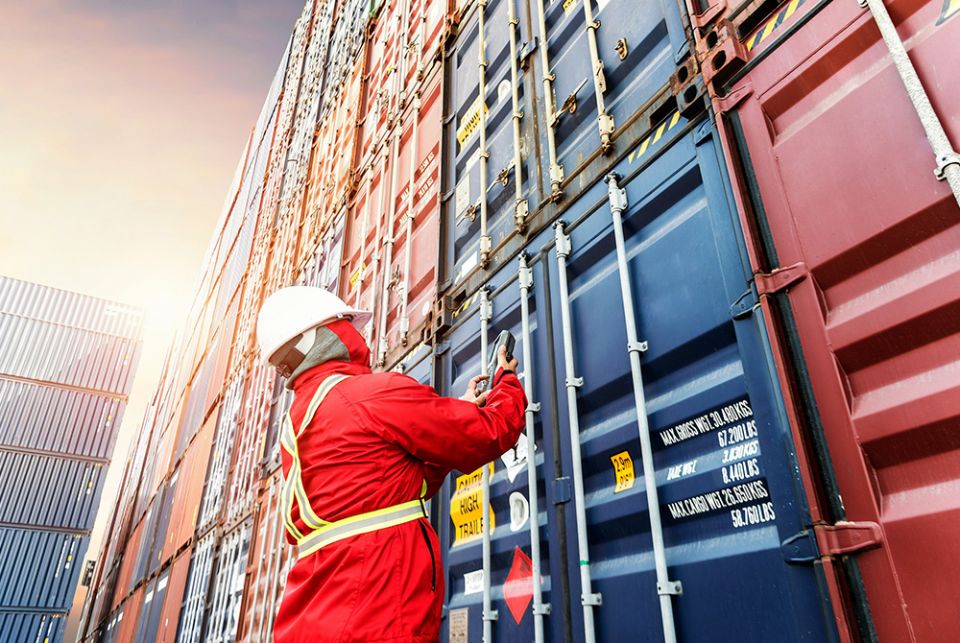 A seafarer checks containers in this photo illustration. Seafarers are responsible for delivering most food, medicine, and electronics around the world, but disembarking at most international ports has become an impossibility. (Courtesy of Solidarity with Seafarers)

Invisible to those ashore yet instrumental in keeping afloat the comforts of daily life, seafarers have long seeped through the cracks as they straddle worlds and identities.

They have home countries but live literally adrift, becoming strangers to all nations. They play a role in 90% of global trade but are not typically considered essential workers. They are prone to abuse and exploitation but often fall just outside the realm of trafficking advocacy.

Now, because of the coronavirus pandemic, hundreds of thousands of these itinerant workers are also trapped.

For seafarers, who are responsible for delivering most food, medicine, electronics and even racehorses around the world, disembarking at most international ports has become an impossibility. The ship may be welcome, but to the community where it docks, members of the crew are perceived as potential carriers of COVID-19, even though they have typically been at sea for longer than the virus lasts.

"They're sort of like prisoners, now more than ever," said Sr. Mary Leahy, a Sister of St. Joseph of the Sacred Heart who ministers to seafarers as the port chaplain for Stella Maris, Australia in Sydney. 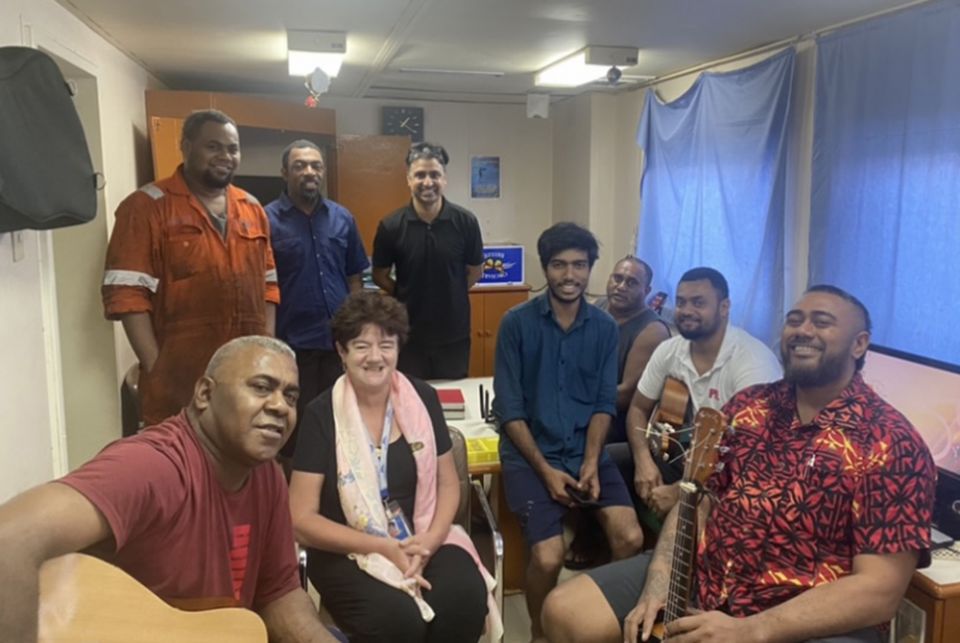 Sr. Mary Leahy (bottom row, second from left) smiles with members of the crew of the M/V Southern Moana ship, who are from Fiji, India, Sri Lanka, Myanmar and Singapore, shortly after conducting an Easter Communion service in their mess room on April 3, Holy Saturday, while the ship was in Port Botany in Sydney, Australia. (Courtesy of Mary Leahy)

The inability to get off ships means crew changes are less likely, so even when a seafarer's contract expires after several months of labor, his or her tie to the job can get extended indefinitely. And because crews tend to be made up of individuals who come from poverty, their desperation for an income can be abused easily, as official complaints may leave them blacklisted from other jobs, Leahy said.

"It's fertile ground for exploitation," she said.

Since the plight of seafarers is distant to those on land, the international campaign Solidarity with Seafarers is bringing it to the fore, educating the public on the link between the products they buy and the people who deliver them as well as encouraging corporations to examine their suppliers' human rights practices.

The campaign — a joint effort by Coalition of Catholic Organizations Against Human Trafficking, Stella Maris, and the Apostleship of the Sea of the United States — has its eye on one particular whale of a retailer: Walmart.

Petitioning for Walmart to sign the Neptune Declaration on Seafarer Wellbeing and Crew Change is the campaign's ultimate concrete goal. The international pact, which over 800 companies have already signed, would help recognize seafarers as essential workers, give them priority access to COVID-19 vaccines, and establish better protocols to ensure timely crew changes, said Jennifer Reyes Lay, executive director of U.S. Catholic Sisters Against Human Trafficking, which organized the petition.

Because Walmart has previously demonstrated a proactive interest in addressing forced labor practices in its supply chains, Reyes Lay said, this push for Walmart to include seafarers in that commitment is as possible as it would be impactful.

"It's modern slavery ... and companies that import stuff should be able to prove there's no slavery in the chain," Leahy said. 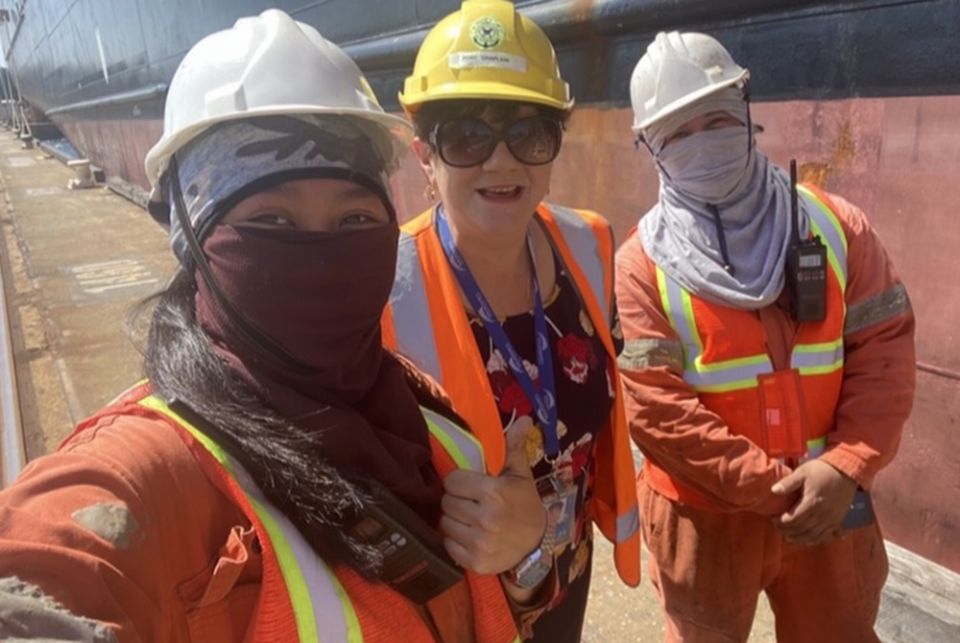 The perils of life at sea

Even before the new obstacles COVID-19 has inflicted, the life of a seafarer has always been precarious: Pirates, dangerous waters, lack of medical attention, labor exploitation, and high rates of suicide are facts of the trade.

Leahy recalled a few cases of injuries met with apathy. When one man had a stroke while at sea, for example, his captain had to fight for the ability to port and take him to a hospital, as the company that chartered the ship insisted that the ship wait a few days to keep on schedule. The man was able to recover at a hospital, Leahy said, only because his captain was adamant that they dock.

"It's like, 'We want you to keep working like a dog, and don't cause us any trouble by having to change our route or pay extra fees,' " said Fr. Sinclair Oubre, a U.S. merchant mariner, referring to the attitude of a ship's charter.

Oubre, executive director and port chaplain of the Port Arthur International Seafarers' Center in Texas, attributed society's and governments' lack of concern to "sea blindness": One's responsibility for the issue disappears with the ship as it sails over the horizon.

"A guy commits suicide or they run into a reef someplace — that'll be over there. It's not our problem," he said.

"We want you to bring us the stuff, but we don't want to deal with you at all." 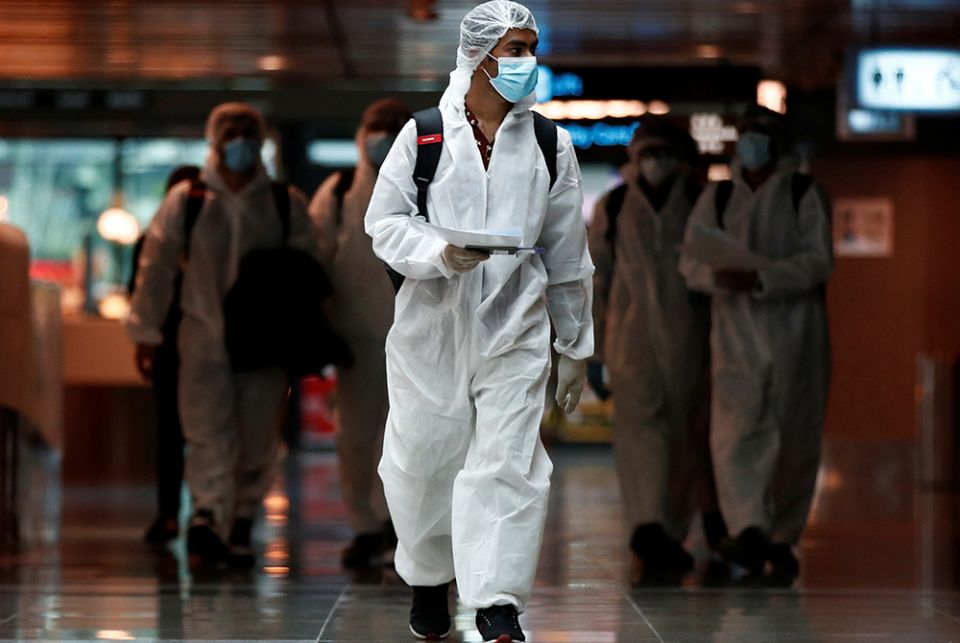 Seafarers who have spent months working onboard vessels during the COVID-19 pandemic arrive June 12, 2020, at Changi Airport in Singapore. (CNS/Edgar Su, Reuters)

Now, the pandemic has added "a great discrimination," Oubre said.

Few restrictions have been imposed on airline personnel during the pandemic, he said; meanwhile, "trying to get a seafarer off a ship [and] to an airplane so that they can get home, that almost became impossible."

"That outraged me. ... People were treating us like it was the 15th century again," said Oubre, who is also the diocesan director of the Apostleship of the Sea in Diocese of Beaumont, Texas.

Then there is the issue of vaccines.

Some ports have been able to work with local health departments to give crews their shots from the gangway, as was the case in Corpus Christi, Texas, Oubre said. But overall, there is no organized effort worldwide to vaccinate seafarers.

"And we fear that this is going to become another stumbling block to crew change," he said: Governments point to seafarers' lack of vaccination as a reason to keep them from getting off the ship.

"You get into a real Catch-22 situation: You can't get home to get a vaccine because you don't have a vaccine," Oubre said.

Campaign, port volunteers help how they can

The perils of this occupation are not lost on Pope Francis, nor are seafarers' essential contributions to society despite their absence in the media's discussion of essential workers.

"Without the people of the sea, many parts of the world would starve," Francis said in his prayer intention for August 2020.

Video of Pope Francis' prayer intention for August 2020, in which he specifically calls for prayers for fishermen, sailors and their families. (YouTube/Vatican News)

The Solidarity with Seafarers Campaign hopes to remind people who seafarers are, why they're crucial in the supply chain, and why it's important to take an interest, said Lisa Lungren, the national education and outreach coordinator on immigration and anti-trafficking at the U.S. Conference of Catholic Bishops' Migration and Refugee Services.

"When people go to Walmart or Costco, we just think our products magically appear," Lungren said, illustrating the mindset advocates hope to change through the campaign, which launched May 22, the National Day of Prayer and Remembrance for Mariners and People of the Sea, and will continue through June 25, the Day of the Seafarer.

Educational inserts for parish bulletins, a social media campaign, prayers and information to sign the petition for Walmart to join the Neptune Declaration are all a part of the campaign's resource packet.

The campaign is also promoting donations of nonperishables for port chaplains to give to seafarers, as well as slippers and toiletries, items that may not have been in care packages before the pandemic, when crews could get off the ship to buy basic items for themselves, Lungren said. 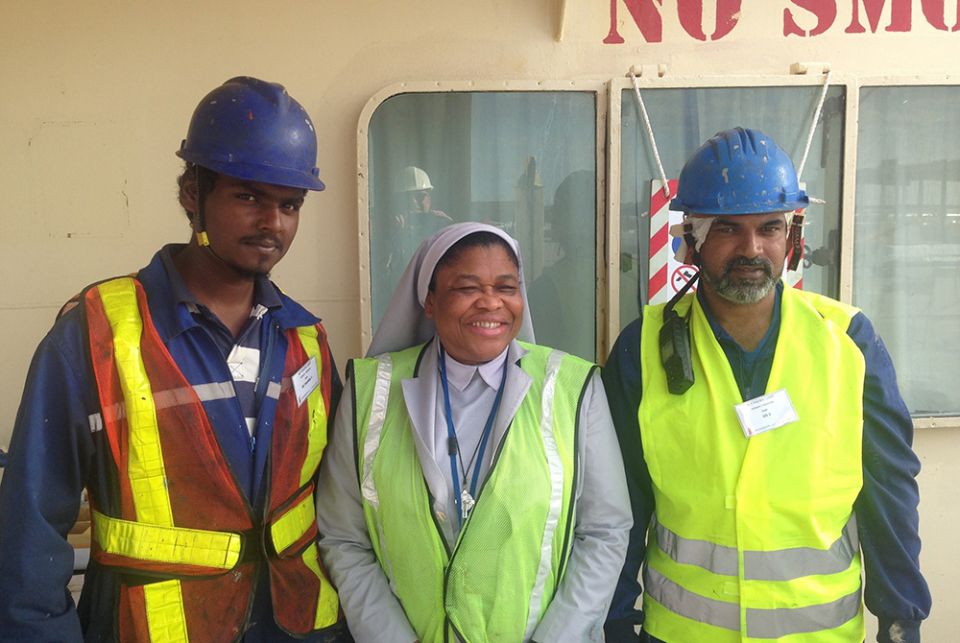 Sr. Joanna Okereke, center, is a Sister of the Handmaids of the Holy Child Jesus and the national director of the Stella Maris ministry of the U.S. bishops' conference. She and chaplains and volunteers run errands for seafarers; they learn what the crews' needs are, buy the supplies and leave them at the dock for the seafarers to pick up after the volunteers leave. (Courtesy of Joanna Okereke)

Now, people like Sr. Joanna Okereke run those errands for seafarers. Okereke, the national director of the Stella Maris ministry of the U.S. bishops' conference and a Sister of the Handmaids of the Holy Child Jesus, and other chaplains and volunteers learn what the crews' needs are, buy the supplies and leave them at the dock for the seafarers to pick up after the volunteers leave.

In addition to ministering to the seafarers' families while they're away — "many lose their families if they are at sea for close to a year and no communication" — Okereke said Stella Maris attempts to be the parish they otherwise wouldn't have and makes them "feel at home in different ports."

Though maritime ministries aim to "bring the church" to seafarers, as Okere said, Oubre noted that the church at large should do more to bring this cause away from the margins.

"We are truly the last flea hanging on the last hair of the tip of the tail of the dog of the Catholic world," he said. "We're way out there."

Increasing my vocabulary and surviving COVID-19 in 2021