by Lise Alves
Coronavirus
Ministry
This article appears in the Coronavirus: One Year Later feature series. View the full series. 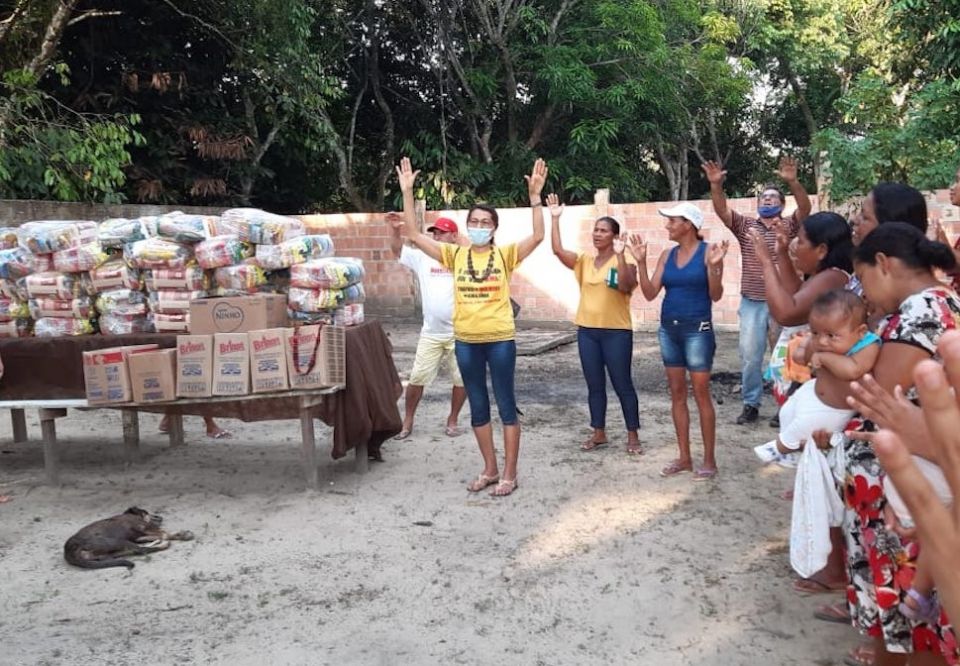 Sr. Maria Odete Pereira, center, of the Congregation of the Immaculate Heart of Mary gives thanks before the distribution of food baskets to residents of the Our Lady of Fatima community just outside of Manaus, Amazonas state, Brazil. (Courtesy of Sr. Roselei Bertoldo)

Editor's note: On March 11, 2020, the World Health Organization said COVID-19 could be characterized as a pandemic. One year later, millions of lives have been lost to the virus, and people worldwide are taking stock of the last year and what the future holds. This week, Global Sisters Report looks at the impact of the pandemic on religious life with a special series, Coronavirus: One Year Later.

SAO PAULO, Brazil — Religious presence in the Amazon region in the past year has been a challenge. But between distributing food and lending a friendly ear to those afflicted by unemployment, hunger and despair, the religious women working in Brazil's Amazonas state have been a driving force, helping the population cope with the dramatic situation of COVID-19 in the region. They have also, however, faced their own anguishes because of social distancing.

"I believe our greatest struggle is to know that these people, who live far from cities and [are] isolated, are in desperate need, and we are not being able to help them personally," said Sr. Roselei Bertoldo, missionary of the Congregation of the Immaculate Heart of Mary, who lives in the capital city of Manaus in the middle of the Amazon jungle.

"COVID-19 makes you very lonely, especially at night," said Sr. Maria Aparecida Marques Fernandes, a Franciscan Catechist who has been living in São Gabriel da Cachoeira, known as the most Indigenous city in Brazil, for the past eight years. The city borders Colombia and Venezuela and is home to 23 ethnicities and 18 different Indigenous languages in addition to Portuguese.

Fernandes, who has had COVID-19 twice, told Global Sisters Report that the most difficult aspect of the pandemic is the imposed social isolation and the lack of physical contact with people from the community.

"Listening is now done over the phone and over the internet," she said. "We [missionaries] were forced to learn another type of listening, something other than face-to-face communication. Isolation forced us to reformulate, to readapt; we had to pray differently and create new ways of being present." 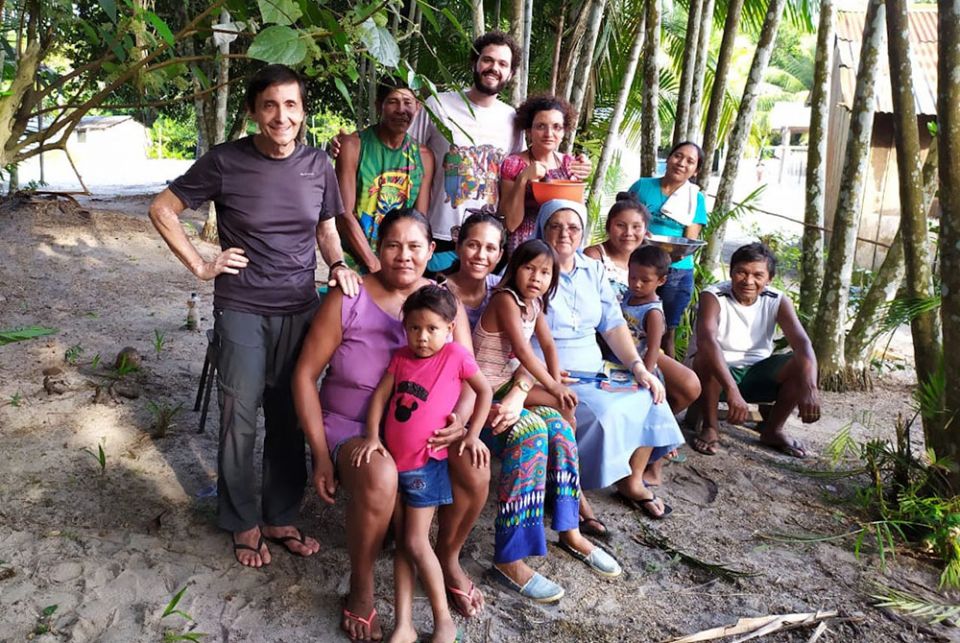 Sr. Lúcia Vieira Gonçalves of the Daughters of St. Mary of Providence, seated in habit, on an August 2020 visit to St. Jorge's and other communities along the riverbeds of the Amazon River and its tributaries, one of the main jobs of religious women in the region. (Courtesy of Sr. Mary Aparecida Fernandes)

Since March 2020, almost 320,000 people in Amazonas state, which has a population of 1.4 million, contracted COVID-19, and over 11,000 died from complications related to the coronavirus, according to official figures from the Amazonas Health Surveillance Foundation. Brazil has been one of the countries hardest-hit by the virus, especially with the recent outbreak of a more contagious variant.

Lockdowns are determined locally by mayors and governors. Currently, eight of the 27 Brazilian states have some level of lockdown, ranging from stay-home orders to curfews to only essential services operating during weekends. This is the second time Brazilian officials have imposed restrictions to halt the spread of COVID-19; the first time was in March 2020 and lasted, in some cases, until June.

To lessen the isolation felt by many forced to remain at home during the second wave of COVID-19, which began in December, the Archdiocese of Manaus at the beginning of February started a hotline for people who feel lonely. The group began with 30 volunteers, 15 of whom are religious sisters, including Bertoldo.

"They call to unburden themselves, to talk about their pain," said Bertoldo, noting that "being able to speak, being able to externalize what they are feeling is very important."

"During the first two days of operation, I had already received three calls," Bertoldo said.

And it is not only the population that feels the strains of isolation. Fernandes herself said what she missed the most during these past few months have been the visits to the remote communities along the river. 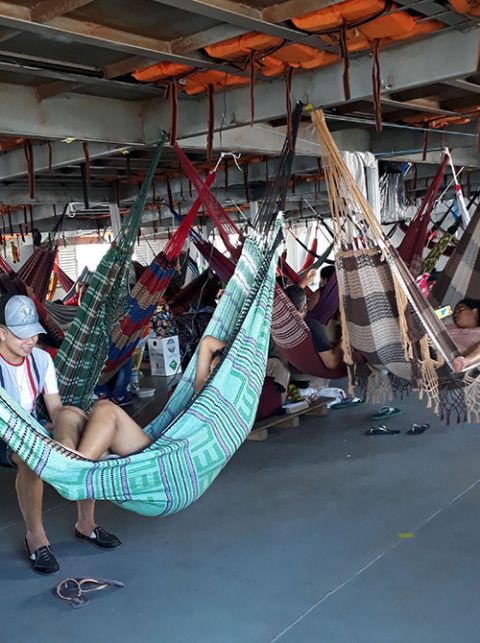 Passengers use hammocks to sleep on the dayslong trip along the Solimões River between Manaus and Tonantins in June 2020. (Courtesy of Sr. Alessandra dos Santos Santana)

"Between the first and the second waves [April to June and December to February], we returned to making our regular visits, and those were very fulfilling," she said. "I made eight visits between July and November, and although it sometimes took 10 days by boat to reach some of these communities, these visits have been some of the best experiences I've had in my life."

In addition to difficulties caused by social distancing, sisters in the region are also tackling pandemic-related hunger and unemployment in big cities like Manaus.

Bertoldo's congregation, for example, started to distribute food baskets and hygiene products to families living along the riverbed on the outskirts of Manaus, something the congregation did not do before the pandemic.

"The number of people going hungry in and around Manaus has surged, and many are desperate," she said.

The constant lockdowns and stay-at-home orders have also made vulnerable a surging mass of unemployed, who fall prey to people who pretend to offer employment but only want to exploit them. Bertoldo, who is also an active member of the Um Grito pela Vida (A Cry for Life) network, which combats human trafficking, said youths are particularly at risk.

"The exploitation of young people via the internet has grown significantly. There has been a surge of job offers over the web, and when these youngsters answer these ads, they are sent to houses of prostitution and places where they are forced to perform virtual sex," she said.

The network's work, which used to be done in schools and through conferences, is now conducted virtually through webinars about domestic violence, sexual exploitation and human trafficking.

"The number of official complaints has dropped a lot, even though we know that violence has not," she said.

The recent crisis over the shortage of oxygen in Manaus' hospitals and health clinics has also led religious sisters to raise funds for those in need.

The city, nestled in the middle of the Amazon jungle, has always had difficulties in the logistics of bringing in medical supplies. Since last year, however, in addition to people with regular ailments needing oxygen, the surge of those needing oxygen because of severe cases of COVID-19 has led to a collapse of the city's supply.

Bertoldo and her congregation have helped, alongside the Archdiocese of Manaus, to set up a collection fund to purchase mini oxygen plants so hospitals can produce their own oxygen supply and not rely on cylinders being brought from other parts of the country and abroad.

According to the religious, the fund has raised more than half a million reais (almost $90,000).

"It is very disheartening to see that many of the poorer population end up getting accustomed to the high number of deaths due to COVID-19," Bertoldo said.

Many times, however, the religious living in the Amazon region not only struggle with trying to help their communities, but also with feelings of helplessness.

"There came a time when I felt depressed and hopeless," said Sr. Benicia Rauber from the Congregation of St. Catherine. 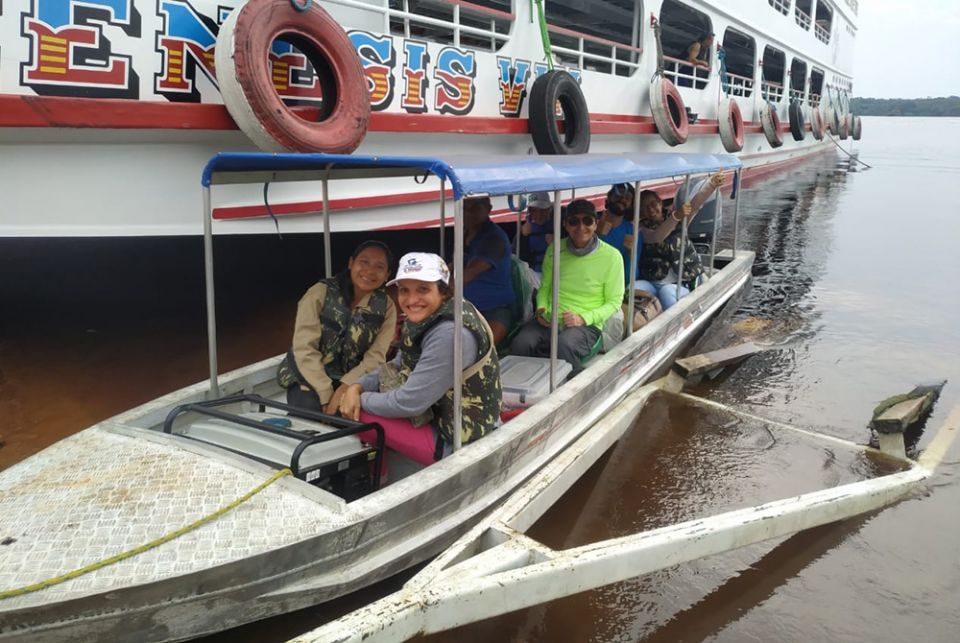 The missionary team, including two sisters, two aspirants to religious life, a priest and a seminarian, travels the Rio Negro in the Amazon region of Brazil in August 2020 to help isolated communities (Courtesy of Jonas Melgueiro)

For the past four years, Rauber has been living in the city of Tonantins, 863 kilometers (536 miles) from Manaus. With a population of about 19,000, the city is a three- to four-day boat trip up the Solimões River from the capital city, Rauber said.

"It was difficult to know that people [in Tonantins] died and see families suffer because they were not able to conduct a wake for their loved ones" because of pandemic restrictions, she said.

Her mission during these four years, she said, has been to accompany the various pastoral commissions in their ministries, visit families and the sick, and help to prepare for sacraments, baptisms and marriages. She often visited riverside communities, but since the pandemic began, her activities and plans have almost all been suspended.

"I felt powerless, discouraged and unable to help the neediest," she said. What made her regain her optimism was a visit from three missionaries who the Brazilian Conference of Religious sent to Tonantins during the period between the first and second COVID-19 waves. 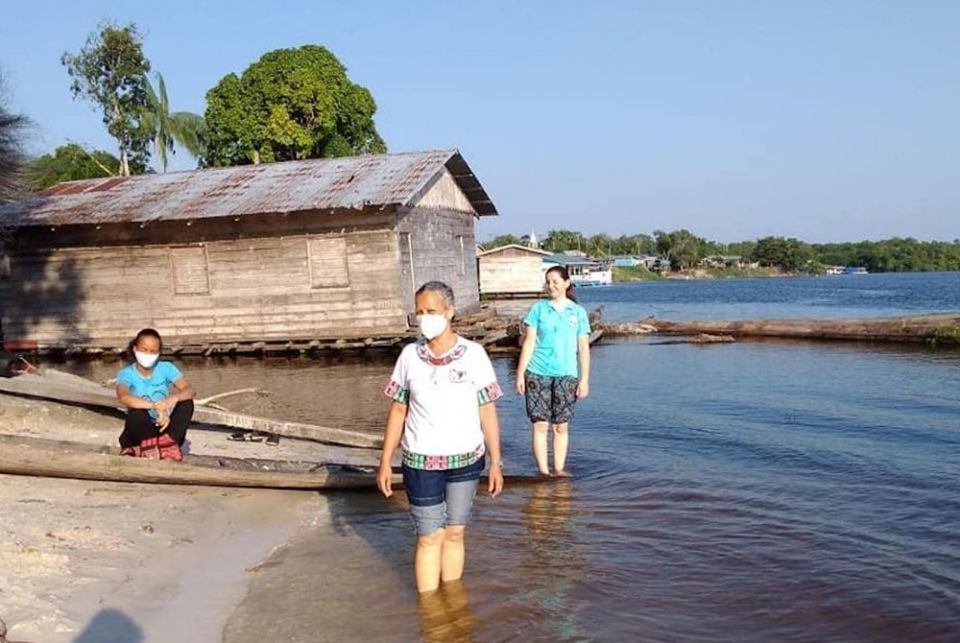 "Three sisters came to us with courage and hope," Rauber told GSR. "Together, we held meetings and visited families affected by the coronavirus. For us, it was an apprenticeship, a great joy to see the religious life dynamics again."

One of the missionaries, Sr. Alessandra dos Santos Santana of the Little Sisters of the Immaculate Conception, also found the experience rewarding. Santana, who has a degree in physiotherapy, helped patients who recovered from COVID-19 with the most common consequences of the coronavirus, such as fatigue, muscle pains and headaches.

And while she found herself working from 8 a.m. to 8 p.m. many days, Santana said she cherished the experience.

"I found an extremely welcoming people; people who were more available to engage, who lived their daily lives in a simpler manner," said Santana, who is currently in the northeastern state of Bahia, spending time with her family before heading to Santa Catarina state to work. "Simplicity brings happiness and joy. Within this simple life, they live the essentials of life." 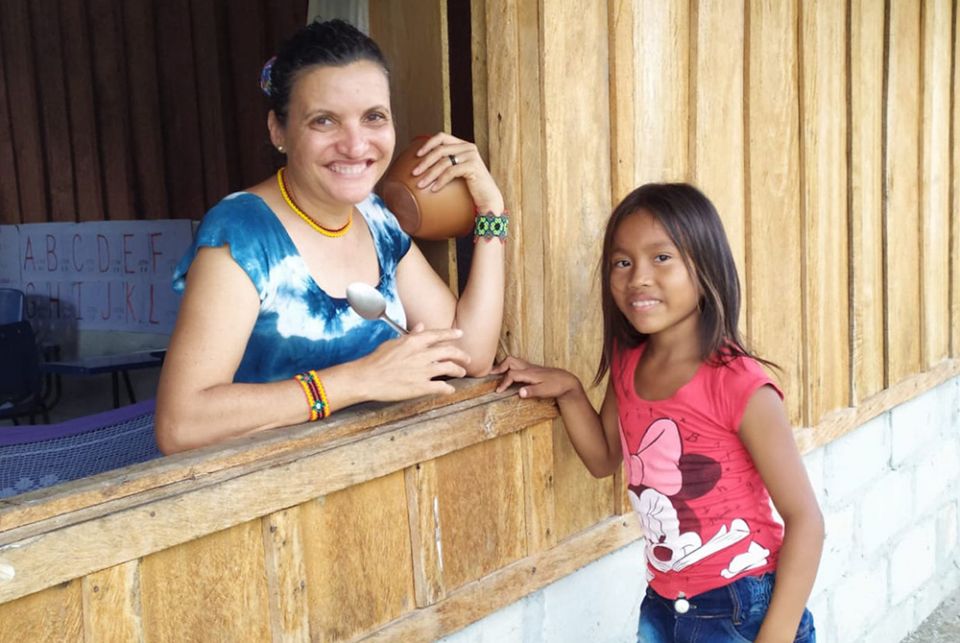 Sr. Maria Aparecida Marques Fernandes, a Franciscan Catechist, has a face-to-face conversation with a girl from the Curicuriari Tribe from her home in São Gabriel da Cachoeira, Brazil, in November 2020. (Courtesy of Fr. Maurizio Setti)

As for living in the Amazon region, Fernandes said she has learned lessons in these past few months she will carry with her wherever she may go in the future.

"During that last year, I have re-dimensioned my life. I've returned to the simpler things. I have learned to be more present in the lives of others. I learned that I only really need a few things to be happy," she said.

The village of São Gabriel da Cachoeira sits on the banks of the Rio Negro, the largest left tributary of the Amazon River, the largest blackwater river in the world and one of the world's 10 largest rivers.

"I've also learned that you can physically move away from the Rio Negro, but the Rio Negro will always be inside you," Fernandes said, chuckling.

Bertoldo said this pandemic is showing religious life "the great prophecy of caring and of listening." Religious sisters "have risen to the challenge and are making a difference."

"We are not giving up," Bertoldo said. "We are present in the communities, even if virtually, and working three times harder than we did before COVID-19. This pandemic has shown the perseverance of religious women."

[Lise Alves is a freelance journalist based in São Paulo, Brazil.]

Related: Tell us: What are the biggest changes your community faces because of COVID-19?

Lise Alves is a freelance journalist based in São Paulo, Brazil. She has contributed to English-language news outlets across the world, including The Rio Times, Catholic News Service, The Lancet, The Guardian and National Catholic Reporter.

Coronavirus | As COVID-19 rages in Brazil, sisters in the Amazon fight hunger and isolation

Love in the midst of the mess