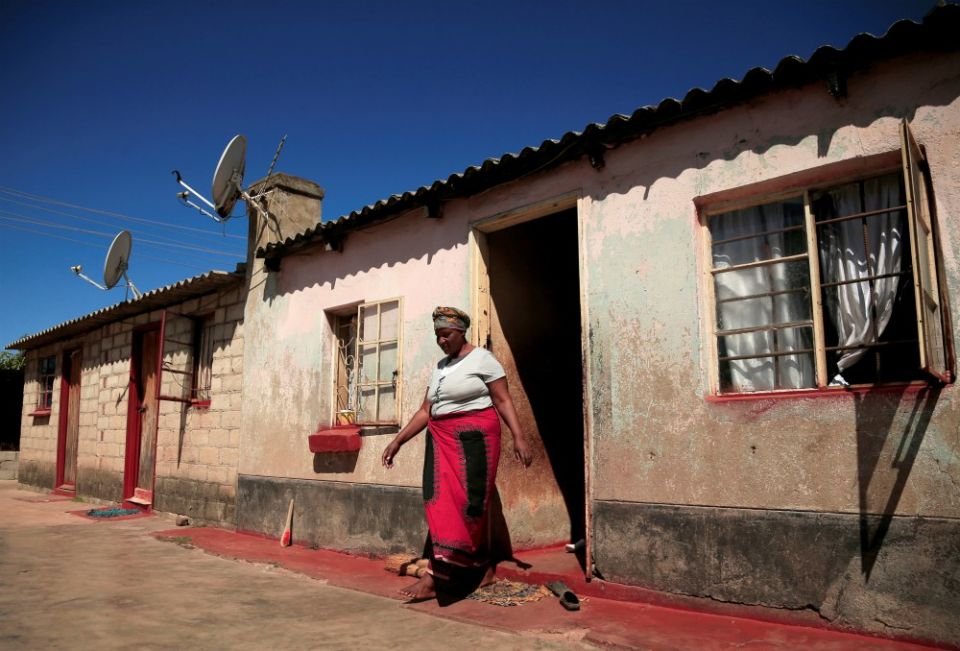 A woman walks out of her family home in Harare, Zimbabwe, on May 9 during the COVID-19 pandemic. (CNS/Reuters/Philimon Bulawayo)

Bulawayo, Zimbabwe — In early April, local media reported that a man in police custody in Bulawayo, Zimbabwe's second-largest city, had shown signs of COVID-19. According to police officials quoted in the story, the man "was at the time exhibiting more Covid-19 like symptoms, such as shortness of breath, shivering and sneezing." Bulawayo lies in the southwest of Zimbabwe, about 480 kilometers (300 miles) from the capital city of Harare.

The police immediately released the man, who had been locked up in a crowded holding cell with other inmates, and reportedly transferred him to a government-run infectious-disease hospital in the city.

Around the same time of the man's reported isolation, the government announced it was shutting down Thorngrove Hospital for renovations in preparation for any COVID-19 cases that might hit this city of more than 2 million residents.

The case highlighted Zimbabwe's lack of preparedness to deal with the global pandemic even as the country's president announced a 21-day lockdown that began March 31. The lockdown has been extended three times, most recently on May 16, when President Emmerson Mnangagwa extended the lockdown indefinitely.

By June 1, Zimbabwe had recorded 178 coronavirus cases, including four deaths. The country continues to struggle with lockdown violations, with more than 40,000 people arrested by May 18, according to the Ministry of Home Affairs.

In addition to the lockdown, the city struggles with unavailability of water, with some suburbs going for months without water amid reports some people are spending nights in water queues.

Yet just across town, Mater Dei Hospital, established by the Franciscan Missionaries of the Divine Motherhood in 1953, sisters have mobilized resources to boost the health center's ability to admit COVID-19 patients.

According to David Coltart, a city lawyer, politician and former minister of education who announced the international fundraising campaign for the Catholic health institution, Mater Dei is "the only medical facility that is anywhere near ready" to deal with COVID-19.

"The hospital needs all the help in can get. Truly, give thanks for the work of the Franciscan nuns," he added.

Sr. Teclar Mukuli, a Franciscan Missionary of the Divine Motherhood and a nurse, said Mater Dei Hospital created a wing to cater to COVID-19 cases with assistance from well-wishers.

"We are working with local health authorities in case we receive such cases," Mukuli told Global Sisters Report. She added that with the country's lockdown, the hospital was not as busy as it would be in normal times. It has not yet received any COVID-19 patients.

Mater Dei Hospital has 186 beds and has for years provided health services that remain unavailable in government hospitals. Many mission hospitals, especially in rural areas, are struggling with medical supplies and critical staff, such as nurses and doctors, because of a lack of funding.

In 2012, St. Francis Hospital in Columbus, Georgia, formed what it called "a sister hospital relationship" with Mater Dei as part of efforts to assist the Bulawayo health institution with equipment and training of medical personnel, among other things.

"When the pandemic hit, the hospital was hard-hit already by the country's economic crisis," Mukuli said, adding that Mater Dei still requires "equipment like ventilators, personal protective equipment, disinfectants and staff empowerment with regards to training us on the management or caring for a COVID-19 patient."

Since the first lockdown was announced March 31, Zimbabwe only had one coronavirus testing center located in Harare, which meant all suspected cases across the country had to wait for their results, further compromising the health of many people in a country struggling to enforce World Health Organization recommendations such as social distancing.

Treatment was also being done in Harare at a designated government health institution.

The concerns for more testing and treatment facilities outside the capital city worsened after the 11th case of COVID-19 was confirmed to be in Bulawayo. The 79-year-old patient died April 2.

The Zimbabwe Association of Doctors for Human Rights immediately issued a statement raising alarm after the man's death.

"It took five days (from 2nd April to 7th April) to get the result of the COVID-19 test a period which is rather too long. The absence of diagnostic facilities for COVID-19 brings to question the state of preparedness of centres outside Harare," the doctors said.

However, city health officials say local government health institutions designated as coronavirus testing and treatment centers are still lagging behind because of a shortage of testing equipment.

"I requested a detailed report on our health institutions in terms of COVID-19 preparedness and I was shocked to discover that while most were saying they are ready, they indicated that they can only handle mild cases, with all saying they are not ready to accommodate extreme cases. This is rather worrying," July Moyo, the cabinet minister heading the country's COVID-19 monitoring efforts, told state media May 9.

The country's ministry of health has encouraged the involvement of private health institutions in the fight against the coronavirus. Officials say such partnerships have helped make Mater Dei better equipped to deal with various challenges and have proven vital with the emergence of COVID-19.

As the efforts to assist the Franciscan Missionaries of the Divine Motherhood and Mater Dei Hospital to deal with COVID-19 cases continues, fundraisers say they have noted the extensive work being done by the Catholic Church.

"There may be help from overseas coming, but the Catholic Church is already feeding starving folk across Matabeleland [a drought-hit region southwest of the country]. There is a limit to what the church can do," Coltart said. "The church is facing demands of this nature in all its hospitals across the world. It is helping."

In an April 29 update, Coltart said Mater Dei Hospital had completed the screening and observation units at the isolation center thanks to donations, further highlighting the quick turnaround for the Catholic health institution when public hospitals were still struggling with resources and operating without life-saving ventilators.

"A look at our health and education institutions shows a gradual and steep decline. ... Now with the current COVID-19 there is need for outright and vigorous efforts to fight and prevent this pandemic, which if it is not carefully handled in our country, may spell doom to the whole of our nation where hospital structures are not fully-equipped and ready to combat it," the bishops said in an April 2 pastoral letter.

With government hospitals in Bulawayo having suspended the admission of patients with illnesses deemed not critical, while government doctors went on strike to protest poor working conditions, including lack of personal protective equipment, the situation remains gloomy for this Southern African country.

Coltart said supporters of the initiative to help Mater Dei Hospital in light of the COVID-19 pandemic have poured in from far and wide, ensuring that hospital staff and the city are ready for any coronavirus cases.

"Mater Dei is the best option for Bulawayo," Coltart said.

Q & A with Sr. Gertrude Sibanda, on the frontlines of maternal health care in rural Zimbabwe

Religious vows offer wisdom as we experience this epic uncertainty