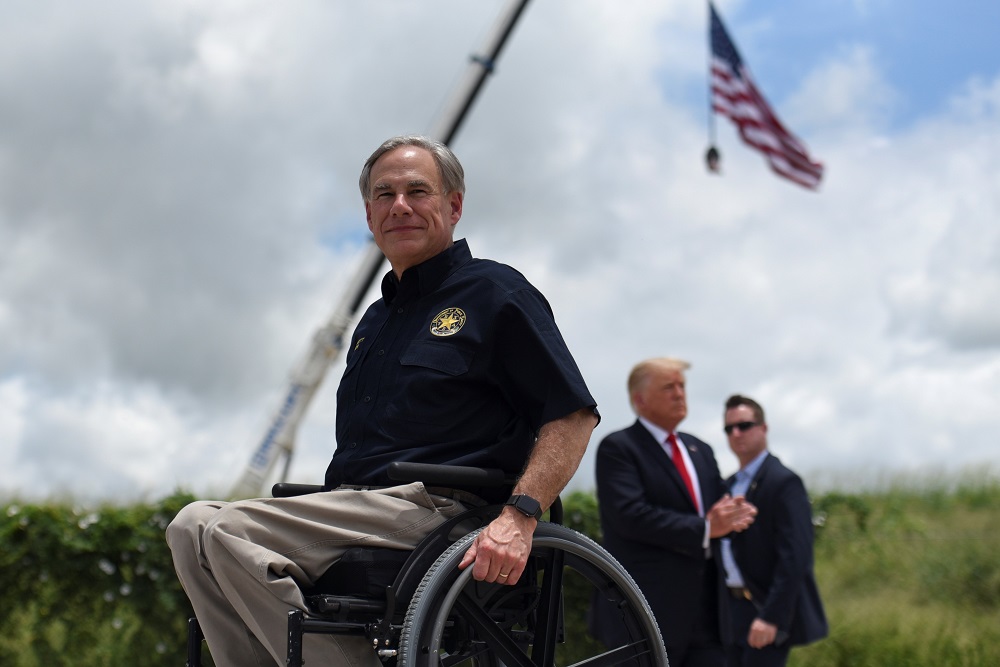 Texas Gov. Greg Abbott exits the stage with former President Donald Trump after a June 30 visit to an unfinished section of the wall along the U.S.-Mexico border in Pharr, Texas. (CNS/Reuters/Callaghan O'Hare)

The Biden administration filed a lawsuit July 30 against the state of Texas, trying to stop enforcement of an order aimed at migrants that it calls "dangerous and unlawful."

The order seeks to prevent anyone except state or federal authorities from transporting migrants who may have crossed the border illegally.

Texas Gov. Greg Abbott issued the executive order July 28 after authorities reportedly discovered a migrant family, which was being aided by the local Catholic Charities agency, at a fast-food restaurant without masks even though they were supposed to be in quarantine at a hotel after testing positive for COVID-19.

Abbott said the measure is to stop COVID-19 from spreading into the community, which is seeing a rise in infections, insinuating that immigrants are to blame.

But some questioned the order, including the bishop of Brownsville, Texas, who said the order amounts to racial profiling. The order also set off a legal battle with the federal government.

The U.S. Department of Justice filed the suit to block the order, which gives troopers the ability to pull over and impound a vehicle, if needed, that is suspected of transporting migrants. The department also filed an emergency request to immediately stop its enforcement, saying it would have "tremendous consequences."

In the suit, filed in El Paso's federal District Court, the department said Abbott's executive order causes injury "to individuals whom the United States is charged to protect, jeopardizing the health and safety of noncitizens in federal custody, risking the safety of federal law enforcement personnel and their families, and exacerbating the spread of COVID-19 in our communities."

Catholic Charities of the Rio Grande Valley, which was housing the immigrant family at a hotel where they were supposed to quarantine, said the incident that led to the order has been blown out of proportion and urged the state to reconsider.

Sr. Norma Pimentel, a member of the Missionaries of Jesus, who is executive director of Catholic Charities of the Rio Grande Valley in Brownsville, tried to clarify what happened in a Facebook Live video July 29.

The family involved was quarantined at a hotel where the Catholic nonprofit had placed them after they were released by Border Patrol and tested positive for the virus.

Catholic Charities of the Rio Grande Valley in the Brownsville Diocese has a long history of helping migrants released from federal custody with food and shelter before they go to their final destinations in the United States.

Because of COVID-19, Pimentel said, families who have a member test positive are quarantined in a hotel. Though it's not a requirement that all members quarantine, some families just want to stay together. It's a practice Catholic Charities of the Rio Grande Valley has had in place since the start of the pandemic.

The incident, she said, came about because "one of the families decided to go out of the [hotel] room and go buy a hamburger," but that doesn't mean that all of them do that, she said.

"What we're seeing today, this misinformation, that it's everybody, families are all over, exposing everybody to COVID, it's false. It's not true," she said in the Facebook Live interview conducted by the Diocese of Brownsville.

The Catholic Legal Immigration Network in a statement released July 30 by Viviana Westbrook, its state and local advocacy attorney, said the order was "an affront to human dignity and morality."

"This order, its origins and its goals are a direct attack on all of us, undermining the core value shared by Catholics and other people of faith across this country — we can and must welcome."

Brownsville Bishop Daniel Flores similarly asked on Twitter on July 28, after the order was announced: "How can the Governor's order identify them as 'illegal' and how does looking for them not constitute racial profiling of persons legally in the US?"

Catholic Charities of the Rio Grande Valley usually buses migrants to their shelters and, during the pandemic, to hotels to quarantine. The order could greatly affect the charity's and other nonprofits' daily operations.

Abbott said the order would reduce Texans' risk of exposure to COVID-19.

"The dramatic rise in unlawful border crossings has also led to a dramatic rise in Covid-19 cases among unlawful migrants who have made their way into our state, and we must do more to protect Texans from this virus and reduce the burden on our communities," he said.

Others say, however, that it's the governor's management of the pandemic that has led to the rise of infections and that he is instead scapegoating migrants.

Pimentel in a statement released by Catholic Charities of the Rio Grande Valley said that "at no time" have COVID-positive immigrant families been walking around exposing others in the community.

"They are kept in isolation until they test negative," Pimentel said in the statement.

She said the incident that led to the order was "an isolated case" but one that had caused "a great deal of misinformation and unfortunately serious consequences."

Of the governor's order, she said that "any law or policy that contributes to human suffering is wrong and needs to be corrected."