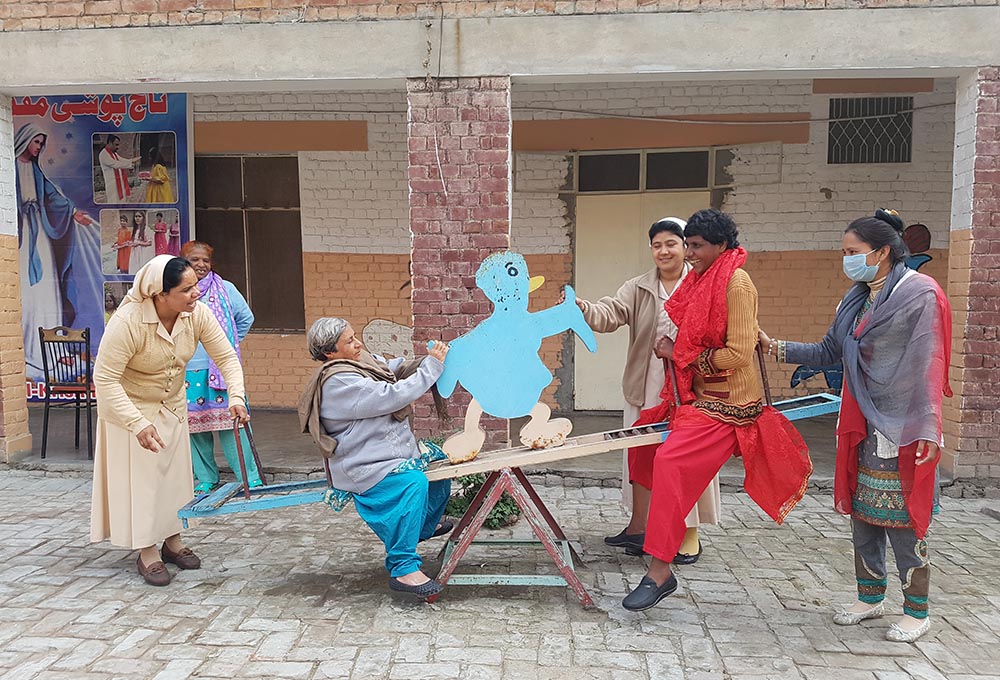 Since the onset of the coronavirus pandemic last year, the Sisters of Charity of St. Jeanne-Antide Thouret have abandoned the Lenten tradition of receiving charity trips to their home for the mentally disabled.

Looking after their 74 residents, ages 13-85, is the top priority for the six nuns serving at Dar ul-Karishma (House of Wonders), which was established on Feb. 28, 1997, in a narrow street of Youhanabad, a predominantly Christian district of Lahore, Pakistan. The facility has separate male and female sections, and is multifaith, including eight clients who are Muslim.

"There were no trips in the Advent season either," Sr. Mariam Gill, administrator of Dar ul-Karishma, told Global Sisters Report. "We are following the standard operating procedures to save our vulnerable residents. Finance is becoming a challenge, as donations have declined due to the impact of the pandemic on our country's already fragile economy,"

The sisters used to send a vehicle on Tuesdays to the Sacred Heart Cathedral to get bread offered during the St. Anthony novena. But since the pandemic, fewer parishioners are attending service at the cathedral so the rector now contributes about 500-1,000 rupees (US$6.34) every week, she said.

"That's barely enough to purchase the eggs for the next breakfast," Gill said. Gas shortages add extra burden of filling cylinders to cook the daily meals, and power outages interrupt music and dance, one of the residents' few joys, she said. 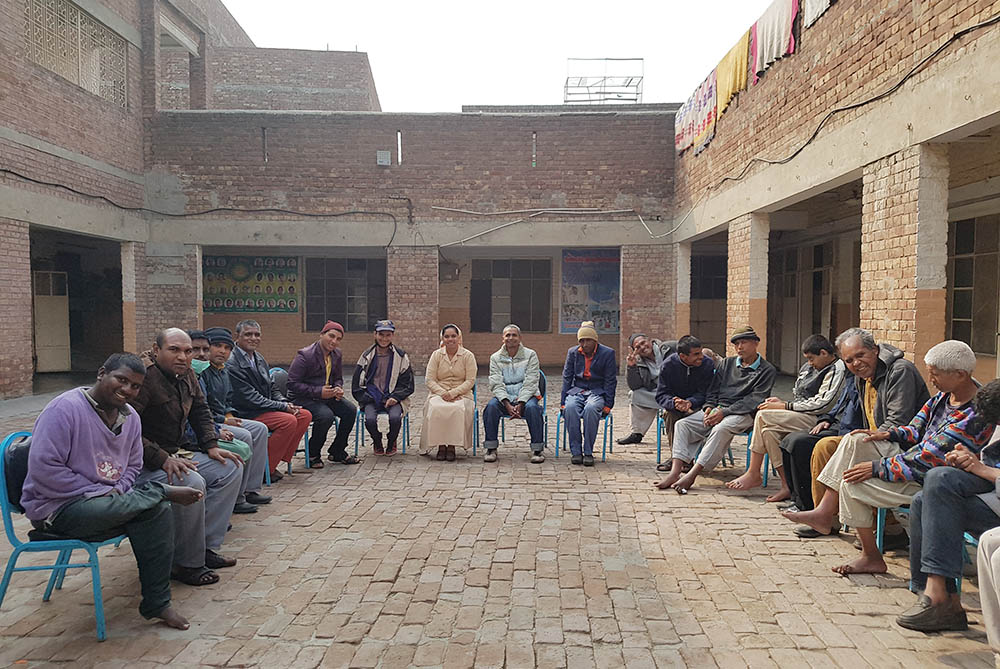 Dar ul-Karishma is one of seven rehabilitation centers for the disabled in three provinces run by Catholic women religious in Pakistan. Like elsewhere in the world, these centers are being impacted by the pandemic in multiple ways — cutting into donations and complicating the care for residents.

There were 826 professed religious nuns and 28 women religious congregations in Pakistan, according to the 2018 Catholic Church directory for the country. Catholic sisters are generally involved in education, medicine, promoting pastoral care and running centers for the elderly and the disabled.

Sister Anna Maria, a Sister of Charity of St. Jeanne-Antide Thouret who is from Malta, started the project with the encouragement of late Bishop Armando Trindade of Lahore. 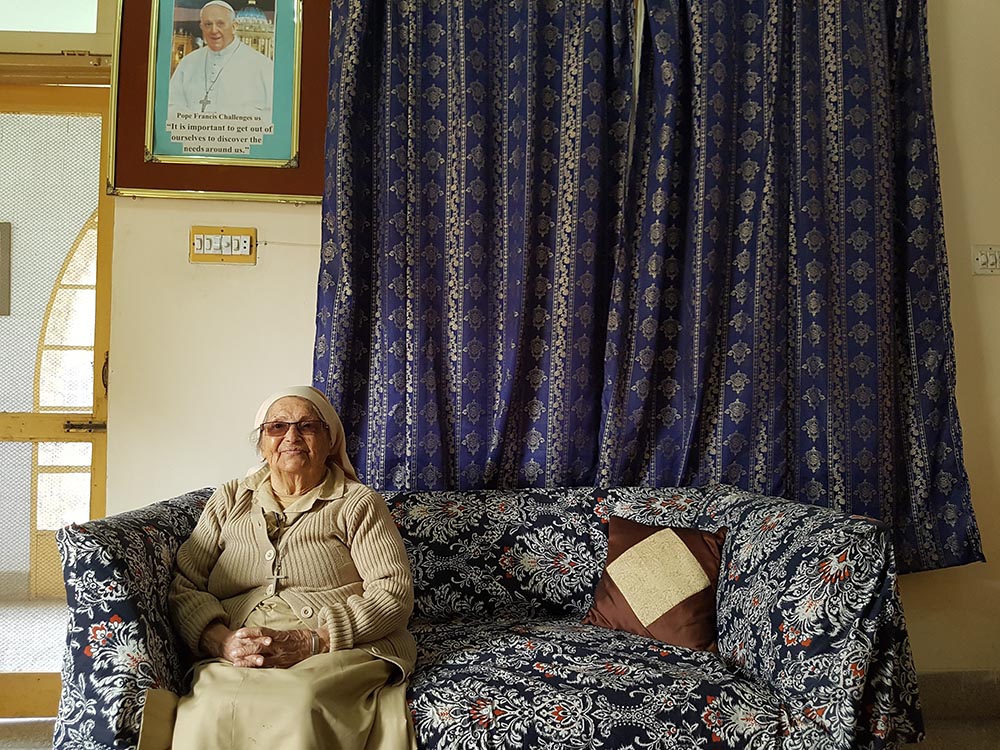 Sr. Anna Maria of the Sisters of Charity of St. Jeanne-Antide Thouret at Dar ul-Karishma (House of Wonders), which she founded on Feb. 28, 1997. (Kamran Chaudhry)

"I can't live without the center residents," said the 89-year-old nicknamed Amma Gee ("respected mother"). "The poor never leave empty-handed from our home. We make sure both the residents with disabilities and visiting poor get food. We are here for them." She noted that benefactors include Muslims.

A staff of 20 caretakers treat the medical and social needs of the disabled, filling their days with choir practice, physiotherapy sessions and sports activities. The Punjab Institute of Mental Health provides them free medicines.

"Most of them were left by someone at our doorstep," added Sister Anna Maria. Others are from the prison and the Punjab Institute of Mental Health.

"They are rejected by both the society and their families," she said. "There are no visits from the relatives either. They stay with us till death."

In recent years, the government of Islamic Republic of Pakistan has honored the services of several nuns dedicated to education and the disabled. 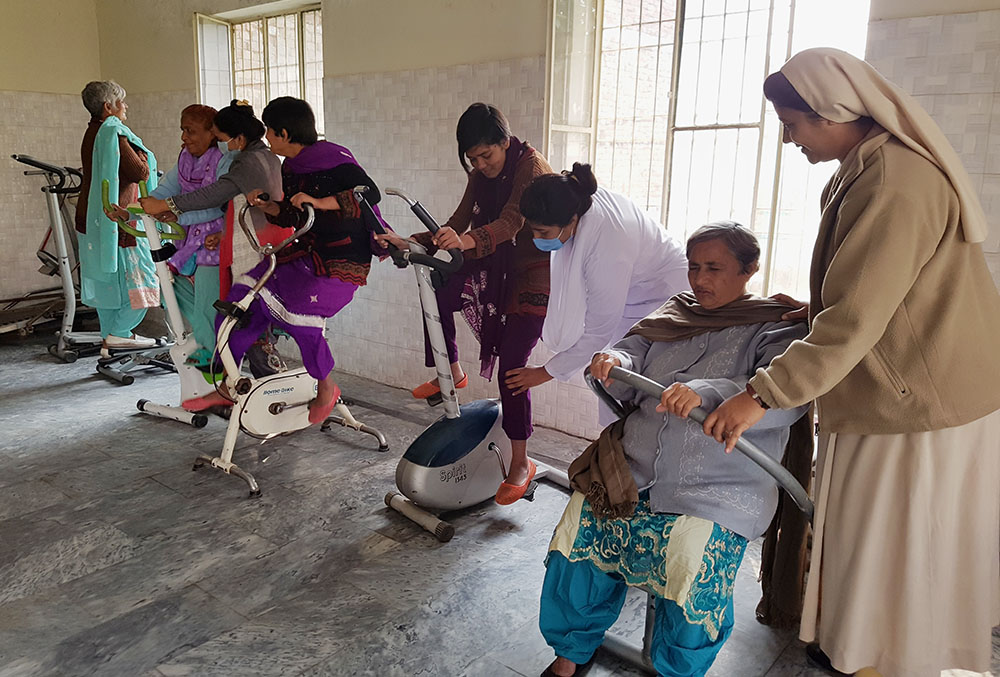 In July 2020, Sr. Ruth Lewis of the Franciscan Missionaries of Christ the King was nominated by the government of southern Sindh province for the Sitara-e-Imtiaz (Star of Excellence), the country's highest civilian award, for her services to humanity and Pakistan, following her death. She was also the recipient of two other notable regional awards, the Pride of Karachi award in 2014 and Hakeem Muhammad Saeed award in 2018.

The 77-year-old nun, who was in charge of Darul Sukoon, Home of Calmness, for underprivileged persons with disabilities, died from COVID-19 in a hospital of the seaport city of Karachi in July 2020. The center is home to more than 100 cognitively disadvantaged and physically challenged persons, mostly children and teenagers.

Besides financial assistance from the government of Sindh, the organization runs on charity and donations from private donors.

The Catholic Church in Pakistan is trying to support these houses for the disabled, even though the usual custom of parishioners' visiting has come to a halt due to the pandemic.

Since 2003, the administration of the Sacred Heart Cathedral of Lahore had been offering its members weekly Sunday trips to visit some of the church-run homes for the disabled, orphanages and troubled children. During these visits, the faithful used to serve food to the residents and hand out biscuits and chocolates among the diners at the facilities.

According to catechist Sarfraz Victor of the cathedral, the only visit scheduled was held March 23 at the National Marian Shrine in Mariamabad village of Punjab province.

Instead of the visits, the mother superiors of the centers were invited during Lent last year and this year to the cathedral to share about their ministries caring for the mentally and physically disabled following a Sunday Mass, he said. Parishioners donated food, clothes, money and other items, he said.

"Our main task is to inspire compassion, strengthen faith and save lives," he said.

The Missionaries of Charity, who run a "Home of Love" for mentally and physically disabled women and girls in Lahore, have also banned visitors. "Due to coronavirus, we are not receiving cooked food, used clothes and used shoes," states a notice pasted on the gate of the facility.

Fr. Mario Rodrigues, former rector of St. Patrick's Cathedral in Karachi, confirmed that the pandemic has also affected the visits of parish groups to the rehabilitation centers managed by the nuns. 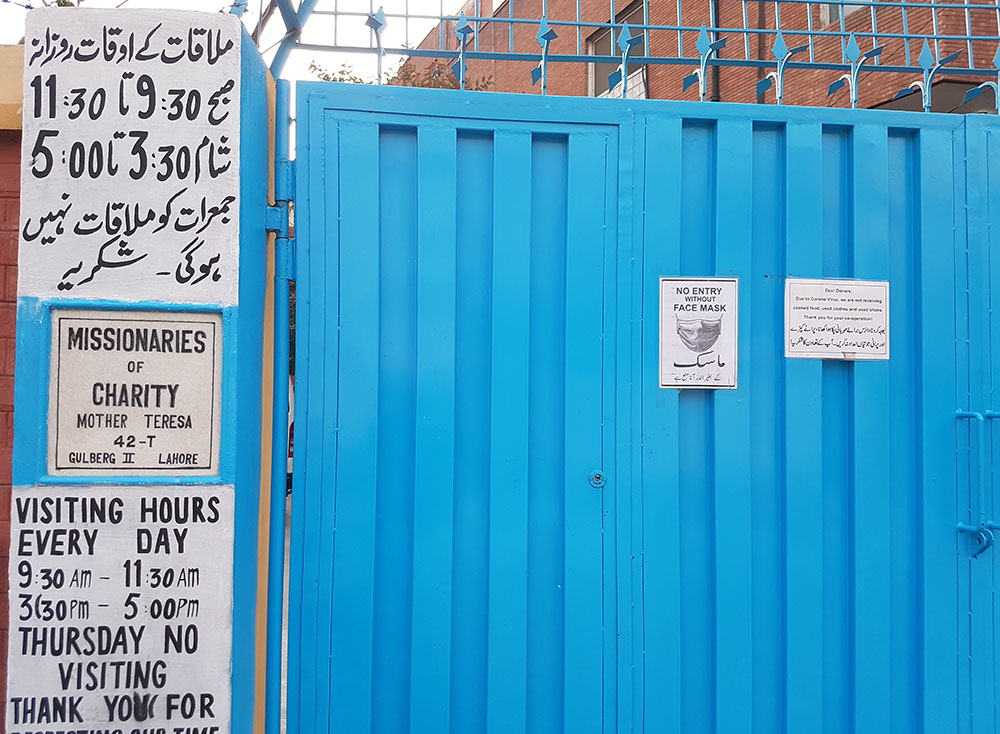 A coronavirus precaution notice at Home of Love, run by Missionaries of Charity nuns in Lahore, Pakistan. (Kamran Chaudhry)

"The archdiocese supports [the centers for the disabled] with a certain monthly subsidy," he said. Concerned parish priests also visit them for prayers, he said.

The Faisalabad Diocese, also in Punjab province, supports a home for handicapped children with an annual subsidy. Besides the annual support, parishes also send gifts for the residents.

Haq David, a Pakistani belonging to the United Presbyterian Church, donated the property to the local Catholic diocese to help the poor. Under the care of the Dominican Sisters of St. Catherine of Siena, the Miss Haq Home for Handicapped Children was founded in 1980.

Dominican Sr. Nasreen Arif became its administrator in December 2020 to revive the center.

"The whole system [of our center] had collapsed since the pandemic began last year. We are trying to revive it by calling back the previous guests. Seven polio-affected patients, including four females, have returned so far," she said.

The lack of contact because of the pandemic affects more than just finances. Kamran, 40, who was admitted to Dar ul-Karishma by his uncle in 2007, said he misses the visitors.

"We love to shake hands with them. The sisters taught me to smile," he said. 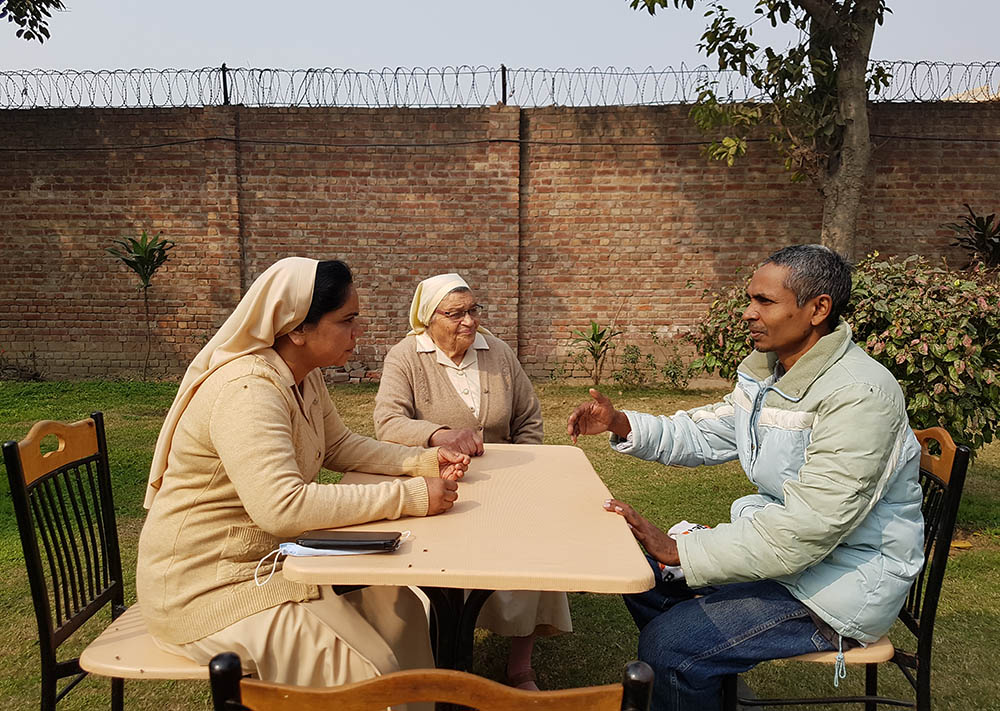 Sisters of Charity of St. Jeanne-Antide Thouret counsel Kamran, one of the 35 mentally disabled males at Dar ul-Karishma. (Kamran Chaudhry)

"I missed my mother [who died in my childhood]. I became very aggressive and once injured my sister with an iron rod. Once I beat her in front of her future in-laws," he said. "Now I listen to Amma Gee and help the staff in the kitchen."