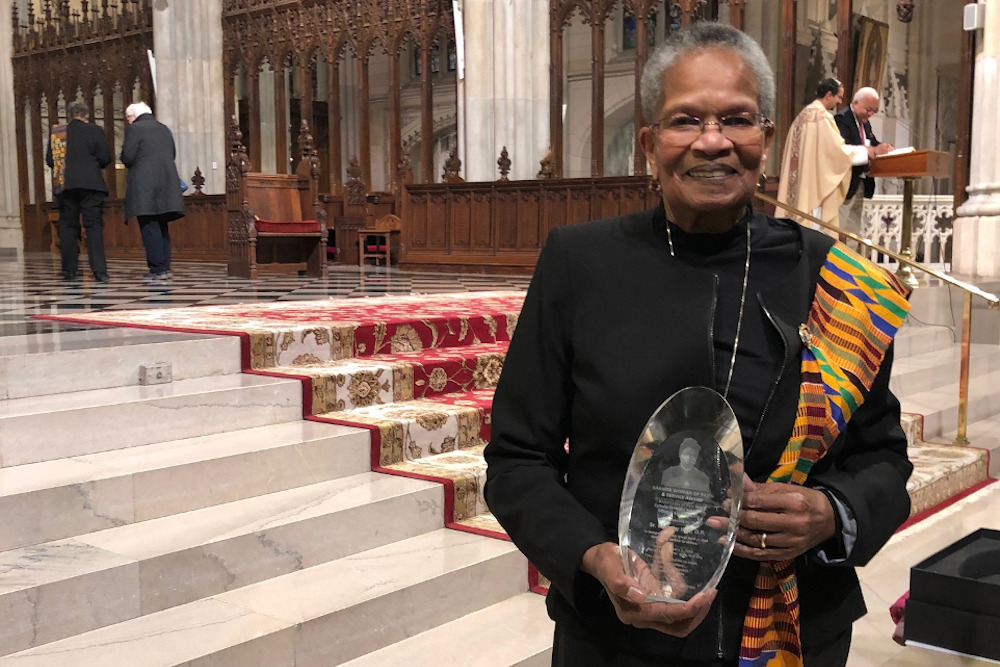 Sr. Dorothy Hall was honored in February 2020 as one of the inaugural recipients of the Bakhita Woman of Faith and Service Award at the New York Archdiocese's annual Black History Month Mass. (Courtesy of the Sisters of St. Dominic of Blauvelt, New York)

Is life returning to a pre-pandemic "normal" in New York City?

It is a question Sr. Dorothy Hall, a member of the Sisters of St. Dominic of Blauvelt, New York, and a lifelong New York City resident, and other sisters with ministries in the city face daily.

While the city is not in the crisis it experienced in the early months of the pandemic in 2020, fluctuations continue. Just when things seem to be returning to normal in New York City — many mask rules have been lifted in the city — outbreaks of new strains of the virus are reported, causing new worries.

In late 2021, Hall was able to return to her ministry of running a church-based food pantry in Harlem, though with precautions still in place.

"There are times when it's stressful because [of] not knowing what I was coming back into in terms of the clients coming and their vaccinations status," said Hall, a pastoral associate at St. Charles Borromeo Resurrection and All Saints in Harlem. "In the beginning, I had to take a moment to get used to being back."

Now that she is back, overseeing food pantries at St. Charles and at Resurrection Chapel in Harlem, Hall cherishes a ministry that has marked her time as a member of a congregation whose charism emphasizes serving the poor and marginalized.

Hall was once married and has two children and four grandchildren. She entered the congregation in 2002 following a long career as a program analyst with the accounting division of the U.S. Army Corps of Engineers.

Hall took final vows in 2007, and her work has been hailed and recognized by those outside and within the New York Archdiocese: In February 2020, Cardinal Timothy Dolan recognized Hall as a recipient of the Bakhita Woman of Faith and Service Award, an award named after St. Josephine Bakhita, a figure "canonized, a product of slavery, and noted for her human trafficking advocacy efforts," Hall said at the time. "This award celebrates faith in God, service to others, and is quite meaningful to me."

GSR: During the first year and a half of the pandemic, how did you do your work?

Hall: I did the ordering from home, and I was in constant contact with the person who works with me. I would tell her when we had a delivery or when to expect a delivery, and she would go over and accept delivery. She basically did much of the work in my absence.

The volunteers were great because they continued to come out every week — twice a week, as a matter of fact. They would come on Mondays to pack the food, and then on Tuesday, they would come back to distribute the food. 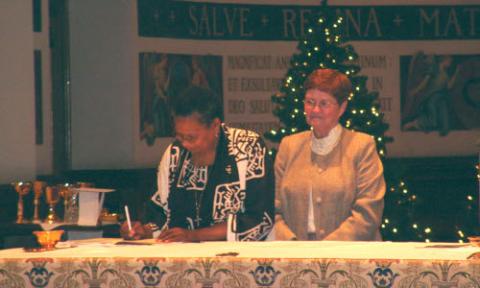 It's been a challenging two years now, just navigating things day to day. Do you think there's some sense of normalcy returning to New York City, or are you still pretty cautious about approaching everyday life?

I've pretty much gotten used to it, and with the people that come to the pantry, they know me, I know them, but basically, we still keep our distance.

We've never stopped wearing masks. We have to wear a mask at all times. And then the clients also, when they come, they have a mask, and those who don't, we give them one.

Have there been problems with that? My impression is of here in New York, people have been pretty cooperative on wearing masks.

Yes. I find that, too, because as I travel the streets, I notice, I pay attention. And just about everyone wears a mask.

The last two-plus years have taken a toll on people in New York City. What has been your overall experience?

We've had quite a few cases of COVID-19, people at both churches who caught COVID. At St. Charles, they lost quite a few parishioners to COVID. I've heard of some at Resurrection, but I know St. Charles had a lot.

You've known people who have died?

Yes. I would say perhaps maybe 30. It could be more than that.

Why has Harlem been particularly vulnerable to the coronavirus?

They have apartment buildings, and you have families living in apartments along with their grandparents. Everybody's in one space, and some of the apartments are not really that large.

Are there other factors as well?

Well, many people have poor health. A lot of them have diabetes or heart problems, for example. 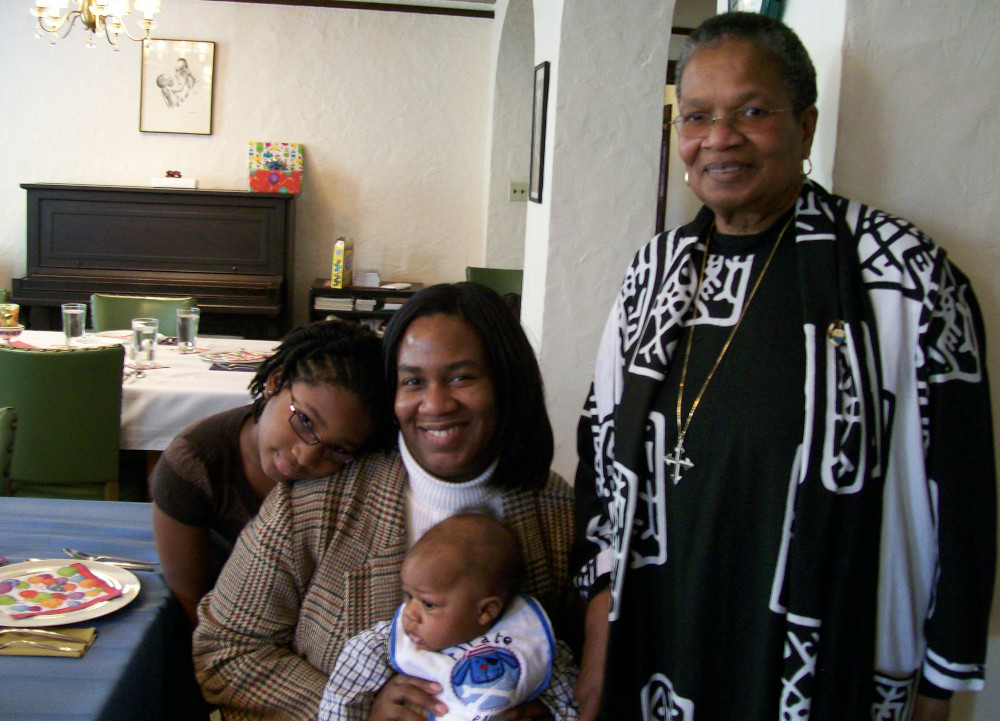 The issues of hunger, income, inequity, affordable housing — these are all linked somehow. How do you assess those challenges two-plus years into the pandemic? Have all of these problems become worse in the last two years?

In some respects, it's gotten better in the sense that more and more, they're making food more readily available in the area. Some pantries have increased their days. In fact, I know of one that has pantry five days a week whereas before, they had it twice. And I do know that City Harvest [a local food bank] has come into the area and that they're there once a week, distributing food. You have more places to get food.

We have not extended our hours or days, but we've had a great increase — like double, sometimes triple, the amount of people coming and still coming.

I've been blessed in the sense that during the pandemic early on, I got a notification from the New York City mayor's office that they would be distributing fresh produce. I can get it once every week, which is a great help, because this way, I'm able to give them fresh produce.

That's a more hopeful picture, that actually here in New York, government and nonprofits have come together and have just really worked to make the situation manageable. What are your numbers like?

Weekly right now, we are preparing 190 to 200 bags a week. And it all goes. Actually, the way it goes is 200 bags of dry goods and 200 bags of produce. This is what we distribute every week. Before the pandemic, the numbers were running between 80 to 100.

Are we slowly getting out of the pandemic, or do you feel it's still very much with us right now?

Well, personally, I feel that it's still with us, even though the numbers of those with COVID are going down. As for the mood, I would say that basically, people tend to be more optimistic than not. At the same time, I do know that many people are really tired of the pandemic. They're just tired of living this way.

"I don't think anyone should be hungry. It's something instilled in me by my mother because no matter who came to visit our home, she always fed them."

There have been these big changes in the last decade in Harlem, with a lot of gentrification. And yet, you see a lot of people experiencing homelessness. How would you describe the area right now? Is it a place of change, do you think?

Well, it is. There are new apartment buildings going up all over the place. There are supposed to be affordable housing units in those buildings, but the people that live here can't afford it unless they get assistance. And that leads to the homelessness.

You're dealing with some real challenges there in Harlem. Things can't always be easy. How do you deal with those challenging moments in your life spiritually?

Feeding the hungry is a passion of mine. And initially, when I started, I was in the Bronx, and I was really taken aback that there was such poverty in today's world. People were in dire straits because there, the median income was less than $14,000 a year. And when I started, I was perhaps feeding 60, 65 clients a week.

In the beginning, I was really stressed because I felt that what we were giving out was not sufficient to feed a family. And I just prayed. Eventually, doors opened up to me, and it went from 60, 65 people a week to 500 people a week. Basically, I think God has provided.

You said feeding people is your passion. Why is that?

I don't think anyone should be hungry. It's something instilled in me by my mother because no matter who came to visit our home, she always fed them. And sometimes, when we were children, we would get mad because she was giving away our food.

What do you think is the best solution to ending hunger?

To me, the solution would be if the big corporations, the rich, would contribute more of their earnings. It should be equitable. This is something I've always said, even before I entered [the congregation]. This is a rich country. There's no reason that people should be hungry, especially children.