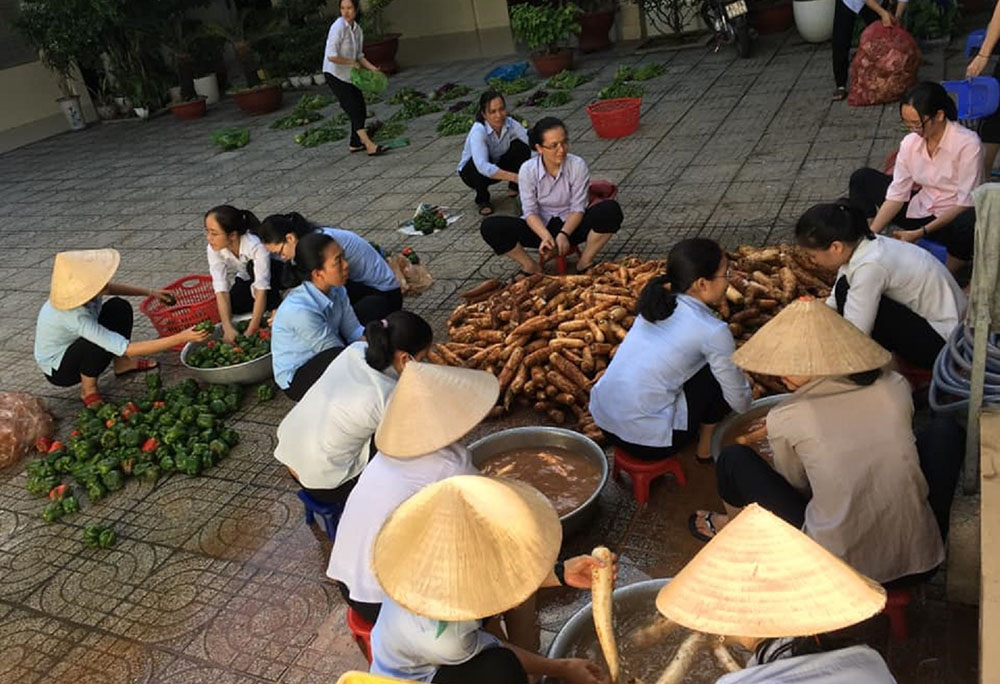 Groups of their neighbors and local authorities volunteer to collect and provide free food for lunches and dinners for people in quarantined places in Ho Chi Minh City. Vietnam's largest city (population 8.8 million) on July 9 started 15 days of tough measures to restrict movement to deal with the highly contagious delta variant of COVID-19 that was detected on April 27. 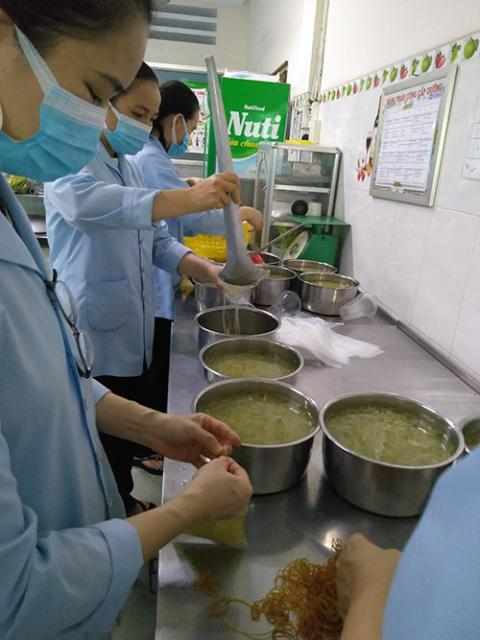 As of July 21, the new serious outbreak has infected 64,457 people in Vietnam and spread to 60 out of the country's 63 cities and provinces. Ho Chi Minh City, the epicenter of the ongoing fourth coronavirus wave, has recorded 41,343 confirmed cases.

The measures require local people to stay indoors, traditional markets to close, gatherings of two or more people to be banned in public places, and public transportation services to be halted. As a result, those who live in isolated areas where infections have increased have little access to buy basic commodities, suffer a severe lack of food, are losing jobs and are under a lot of stress due to social distancing measures.

The crisis has made a massive impact on the Southeast Asian country.

As of July 15, some 212,000 out of 230,000 self-employed workers, including food vendors, motorbike taxi drivers, lottery ticket sellers and hairdressers, were granted 1.5 million dong (US$65) each from the city government, according to Tuoitre Newspaper. The city is distributing 886 billion dong (US$38.5 million) to people in quarantine centers, COVID-19 prevention forces, unemployed workers and teachers at private nursery schools. Amounts range from 1.5 million to 3.6 million dong each.

"We started to offer free food to people in need on July 15 by cooking hundreds of portions per day," said Sr. Mary Pham Thi Huong, head of the day care center. Most sisters work at the center but have become jobless since May when the center was closed due to the pandemic.

Huong said she appreciated volunteers and local officials who worked with them by distributing food to people.

She said those who are deeply affected by the coronavirus are daily earners, street vendors, lottery ticket sellers, scrap collectors, motorbike taxi drivers, jobless workers and beggars. Many of them have called her to seek emergency aid. 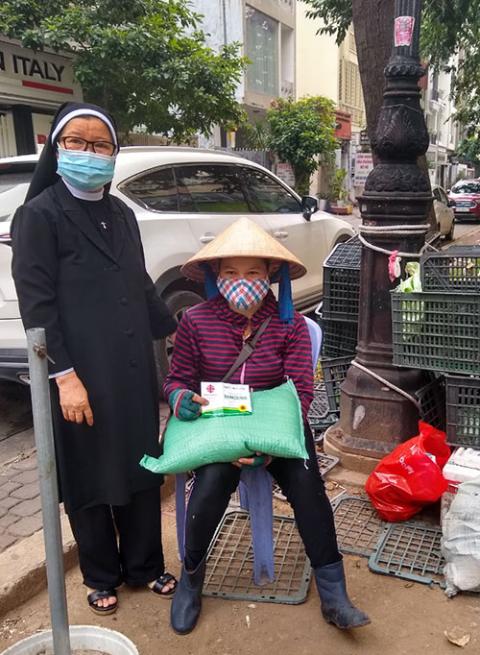 "We are moved to tears at the fact that many recipients said they have to use halves of portions for lunch and the rest for supper to survive in the hard time," the nun said.

She said that in early June she spent two days searching her area and found that lots of people were in a tight corner because of the pandemic.

"We rode bicycles to hand out rice and vegetables to local households, homeless people and those who live under bridges," she said. The nuns could not visit them once the country's largest commercial hub started to impose the strict curbs on movement.

"At first, we have to use our community's food to supply to vulnerable people," she said. "We are over the moon that other people who are interested in our charity service make generous donations to us to serve people," giving the nuns rice, fish, meat and vegetables.

The sisters are doing their utmost to get supplies to people "until our food runs out or the government lifts the curbs," Huong said, adding that two other communities of her congregation also dispense emergency food to people in need in the city.

Sr. Anne Do Thi Thoa, vice superior of the Servitium Christi community based in Ho Chi Minh City, said her sisters daily prepare 100-120 packages of eggs, fish sauce, cooking oil, rice, instant noodles, cake and vegetables. Local people keep a safe distance from one another when they come to collect packages at the convent, she said.

Thoa calls on benefactors to make contributions to the nuns so as to help out those who are affected by the COVID-19 outbreak.

"The COVID-19 pandemic is a chance to share what we have with our brothers and sisters in need. We could close our houses but open our hearts to share love with others in the hard time," the 55-year-old nun said. 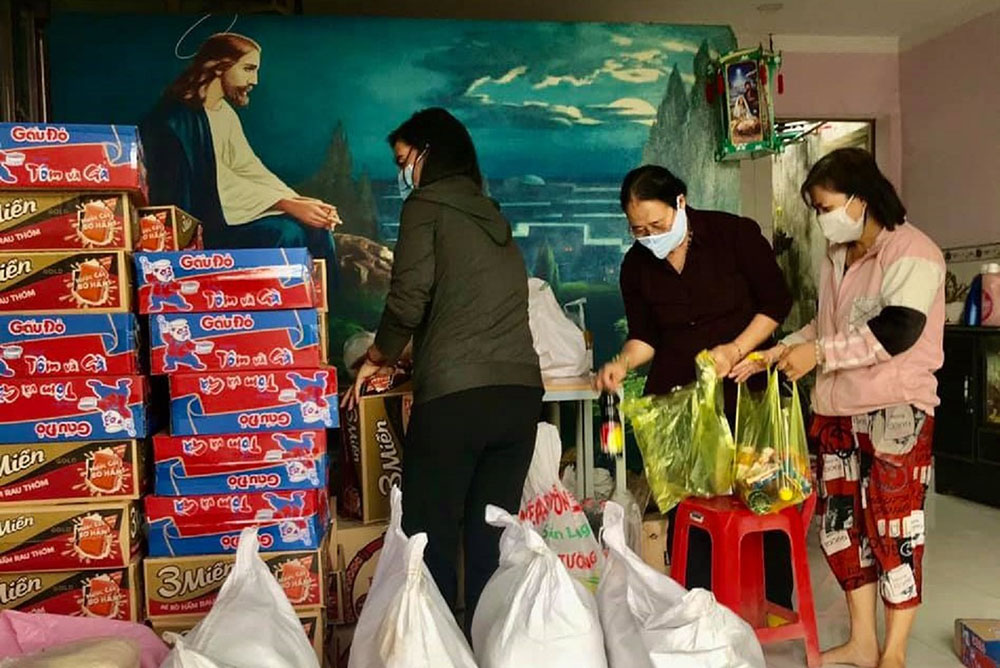 Dominican Sr. Mary Nguyen Thi Minh Du said many families could not afford to buy basic food, especially vegetables and roots. Those items are sold at much higher prices than before the outbreak as food supplies are limited and local traditional markets have been closed. Local people are allowed to go shopping every three days.

Du, who works at the motherhouse of the Dominican Sisters of St. Rose of Lima based in Thu Duc City, said priests, sisters' relatives, and people from other places make generous contributions — vegetables, rice, eggs, fish, rice noodles and other items — to the congregation to serve people lacking food.

"We quickly offer emergency food to people in isolated places and migrant workers who lost jobs due to the coronavirus and have no money to pay their monthly rent," she said. Lay volunteers help carry packages of food to recipients.

The nun said one day, many people with face masks queued up patiently in the rain at 5 a.m. in front of the convent's gate to wait to receive vegetables although they were told to be at the convent at 6:15 a.m. "They collected 600 kilograms [1,322 pounds] of different kinds of vegetables in a short time."

She said on July 16, sisters woke up at midnight and unloaded 5 tons of dragon fruits, banana, avocado, rice, instant noodles, cabbage, pumpkin, sweet potatoes and other vegetables from a lorry. The donations were from benefactors from Ban Me Thuot in the Central Highlands.

"Young nuns carry bags of vegetables weighing 30 kilograms [66 pounds] and above. We finished our work at 2 a.m. We are happy to see people have fresh food for their meals," she said.

"We try our level best to work with other people to feed people and respond to the national aims that no one suffers starvation and is left behind in this difficult time," she said.

Teresa Tran Thi Thu Ha from Thanh Linh Parish in Thu Duc City said many households, including hers, have survived for one week by receiving free fresh food from the Daughters of Our Lady of the Holy Rosary.

"Our Truong Thanh Ward has been quarantined, and at first, we had not a clue how we could get food. We are lucky that the nuns come to our aid," Ha said, adding that the sisters delivered food to their houses. 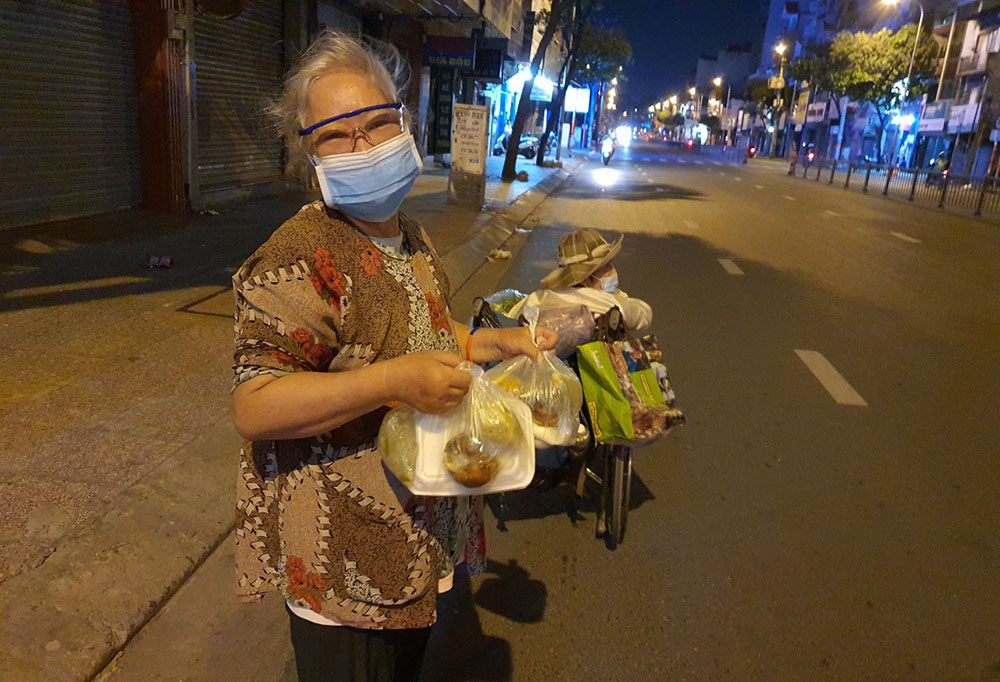 The 35-year-old migrant garment worker said, "We are living on mere donations. We will die of starvation without the nuns' help since we lost jobs, have no income and live far away from home."

Dominican Sr. Anne Pauline Nguyen Thi Ngo, a doctor who works at the public Thong Nhat General Hospital based in Bien Hoa, said sisters could not serve free chao — a kind of gruel made of rice and fish or meat — as they usually do for breakfast to hundreds of poor patients and their relatives in the compound of their convent due to social distancing measures since the July 9 crackdown. The convent is near the government-run hospital.

"I daily offer bread, instant noodles, cake and other basic food to patients at their places in the hospital while I give medical checkups and medicine to them. I am weary but delighted to do something helpful for the poor," said Ngo of the Dominican Sisters of St. Catherine of Siena Thanh Tam. "It is necessary to give them food as their relatives could not buy food from surrounding shops and bistros, which have been closed due to the COVID-19 outbreak."

She said that every day, she tries to distribute the full supply of donated goods she has received. 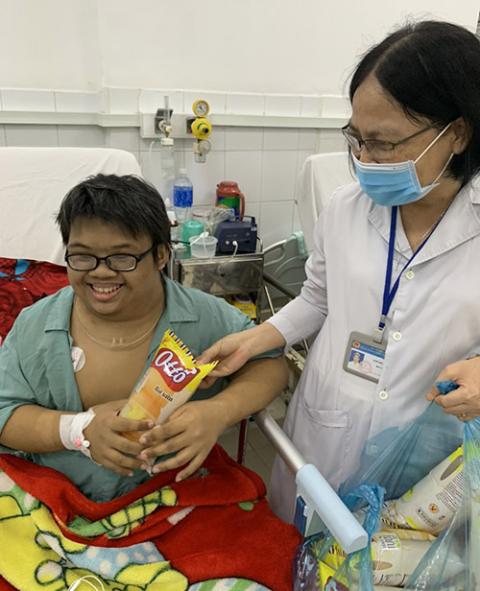 The 55-year-old Ngo said sisters at local parishes receive bananas, green dragon fruit, vegetables, pork and other agricultural commodities from local people, pack them and deliver them to factory workers, migrants and people in need in isolated and quarantined places as a way to share love with them in a hard time.

"Sister Khuyen works with some 3,000 people per day. Please pray for her to be healthy to serve our brothers and sisters," Luong said.

She said her community will send at least six nuns to give health care to COVID-19 patients at quarantine centers and field hospitals in Ho Chi Minh City.

On July 16, at the city's request, Fr. Joseph Mary Tran Hoa Hung, who is in charge of orders and societies based in the Ho Chi Minh City Archdiocese, called on local religious to volunteer to serve COVID-19 patients over the next one or two months at health centers.

He said those who are under the age of 40 and have no preexisting illnesses will be chosen, inoculated and trained in health care before being sent to the centers.

On July 19, Fr. Peter Kieu Cong Tung, head of the Office of the Archbishop's House, said in an announcement on the archdiocese's site that "430 men and women religious volunteers are expected to look after patients at hospitals in the coming days. This is an excellent opportunity for local religious to carry out their missions." Those volunteers planned to enter hospitals on July 22.

He urged people to pray for those religious, other health care givers and volunteers to be peaceful and in good health to serve victims.