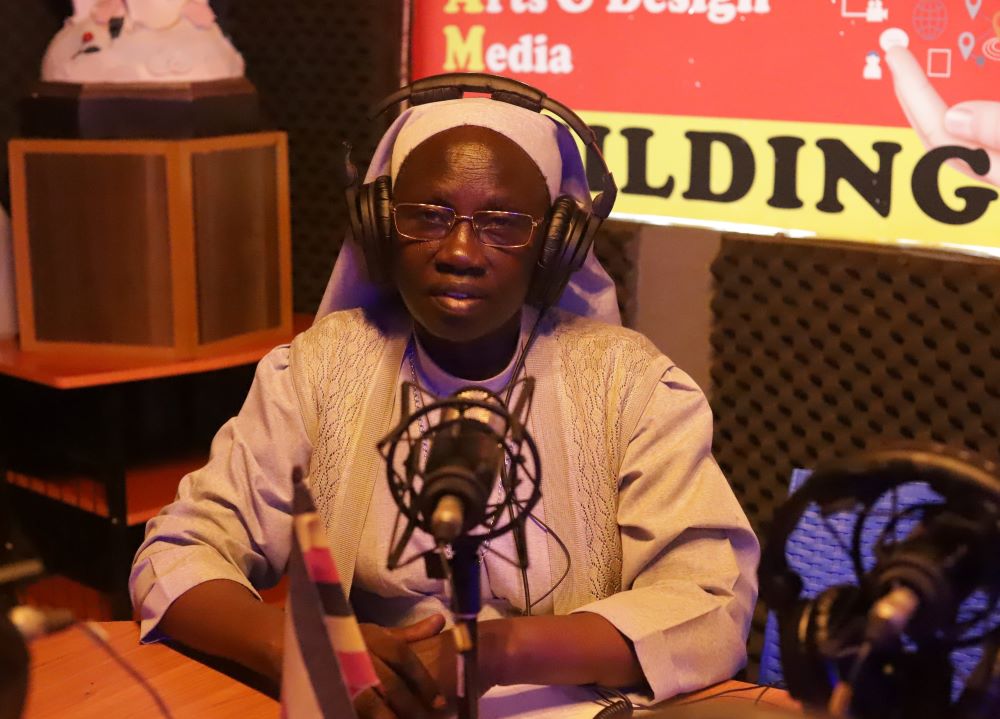 Sr. Mary Lilly Driciru of the Missionary Sisters of Mary Mother of the Church hosts her weekly radio show at Radio Maria Uganda on April 30. She educates residents on the benefits of COVID-19 vaccines and debunks the myths surrounding the vaccines. (GSR photo/Doreen Ajiambo)

Since March 21, 2020, when Uganda confirmed its first case of COVID-19, health officials have struggled to debunk criticism and misinformation about the virus and vaccines to fight it.

Many residents refused to get vaccinated, raising concerns that the vaccines affect fertility and male libido, have serious side effects or even cause death. As of October 2021, only 5% of Ugandans had been vaccinated in this East African country of more than 45 million people.

"When vaccines first arrived, they were met with resistance. Many people had a lot of misconceptions about them," Dr. Annet Kisakye of the World Health Organization in Uganda told Global Sisters Report. "Most believed they caused health complications. Some believed that they might die after a few months and refused to get vaccinated. There was a lot of misinformation spreading around, especially on social media, which wasn't true."

Reacting to the situation, the Association of Religious in Uganda launched the Catholic Sisters COVID-19 Vaccine Ambassadors Campaign in November 2021 to dispel myths about the vaccines and to encourage people to get vaccinated using fliers, a radio show and person-to-person interaction. 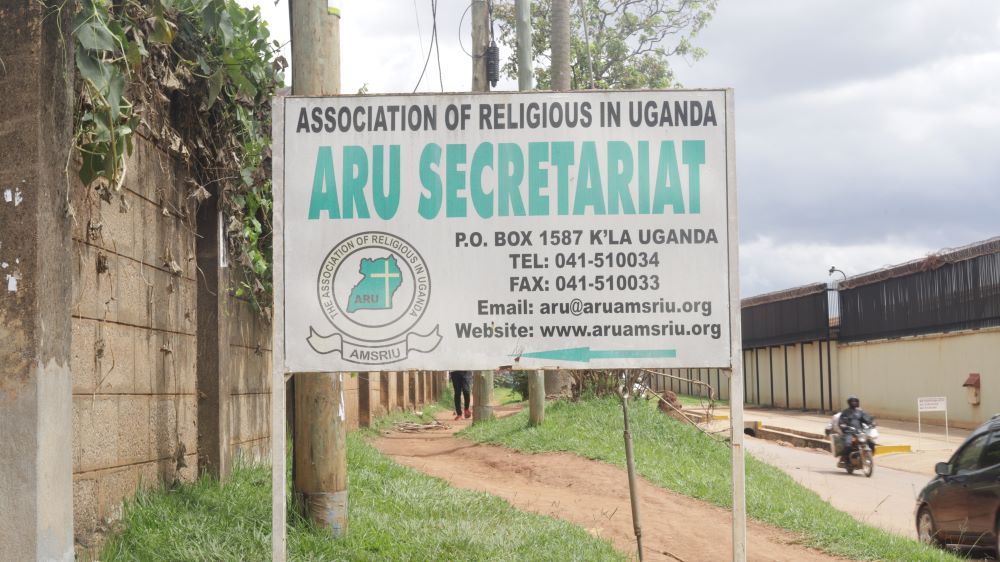 The idea came after the Conrad N. Hilton Foundation, in collaboration with the Vatican COVID-19 Commission, reached out to the Association of Religious in Uganda to help create awareness and debunk myths about vaccines and vaccination in the country. (The Hilton Foundation is the major funder of Global Sisters Report.)

"The biggest challenge was that people didn't want to hear about the vaccines. Therefore, the sisters being trusted members of society made it easier for them to be at the forefront," Mutombo said. 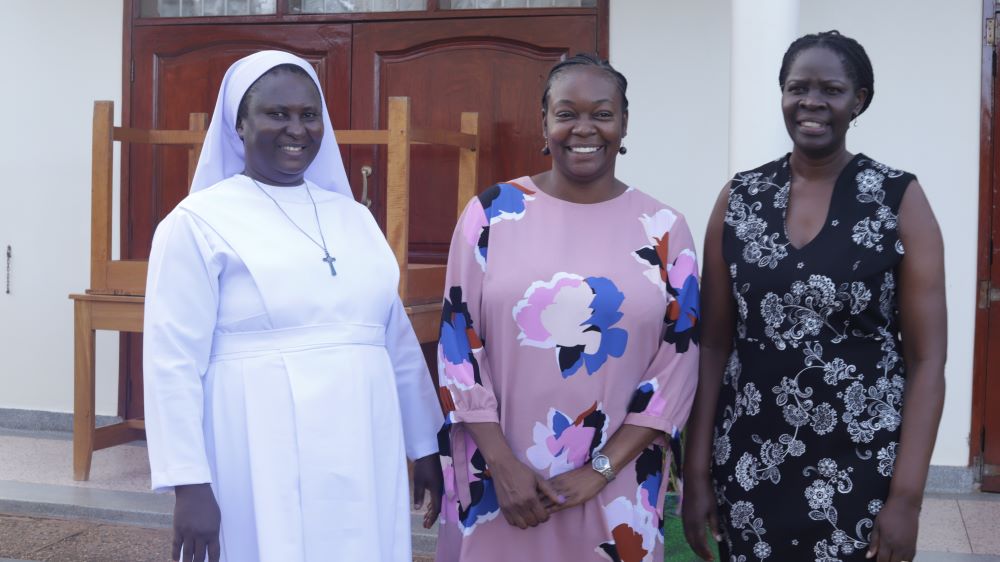 From left: Sr. Mary Lydia Apili Bwor, secretary-general of the Association of Religious in Uganda, Angelique Mutombo, senior program officer at the Conrad N. Hilton Foundation, and Jannet Apalamit Opio, country director at LifeNet International, during a conference in Kampala, Uganda, to educate sisters who are teachers on how to manage COVID-19 at their various learning institutions. (GSR photo/Doreen Ajiambo)

Kisakye agreed, saying most of the Uganda population is Christian and, therefore, knowledge about the vaccines was more believable when it came from the sisters.

"The sisters came in to help demystify the myth surrounding the vaccines because residents trust them," she said.

The Hilton Foundation sponsors the initiative in Uganda and other African countries, including Kenya, Zambia, Ghana, Tanzania and the Democratic Republic of Congo.

Sr. Jane Wakahiu, a Little Sister of St. Francis of Kenya and associate vice president of program operations and head of the Catholic Sisters Initiative at the Hilton Foundation, said the campaign aims to provide critical support to the sisters to battle the virus, educate citizens on the benefits of the vaccines, and ensure there's an increase in the country's vaccination rate.

"We started the sister ambassadors vaccine campaign to advocate and educate people about the vaccine because people had a lot of myths," Wakahiu told GSR. "The sisters needed to provide clear education about the vaccines. The other thing we needed was to increase the vaccine uptake so that more people could take in the vaccine. This is in line with the Catholic Church's social teaching to reach out to the most vulnerable and most poor who could not access the vaccine."

Sr. Mary Lilly Driciru of the Missionary Sisters of Mary Mother of the Church said the Association of Religious in Uganda appointed her to lead the team of religious sisters.

"ARU first engaged with the Ministry of Health here in Uganda so that they could educate us about the vaccines," said Driciru, who is the communications coordinator for the Association of Religious in Uganda. "After the education, we were tasked with giving out the message to the people. Apart from education, our sisters who already worked in the health sector also helped by vaccinating the people."

Driciru said with the help of WHO and health officials, the Catholic Sisters COVID-19 Vaccine Ambassadors Campaign launched across the country to explain the benefits of the vaccines.

The sisters visited health facilities, homes, markets, bus parks, and other social gatherings to explain to the residents how the vaccines work and their benefits and to dispel myths with reliable facts. The sisters distributed millions of leaflets and posters about the vaccine in rural areas to ensure the information reached more people.

The sisters' efforts and message prompted people to start lining up at vaccination centers, Driciru said.

"I began the campaign with our sisters here first because most of [the sisters] did not believe in the vaccines," she said. "We then organized many workshops, especially in the church, with people of different ages. Some of us had to be vaccinated in public for people to be convinced."

"I'm always in the studio to educate people about the importance of getting vaccinated," she said, adding that posters and banners about the vaccine in major cities and rural towns complement their show. "During the show, I receive many calls from people asking questions about the vaccines, and some are happy because through the education, they have accepted to be vaccinated."

In the six months since the start of the campaign, health records show that 38% of people in Uganda have received at least one vaccine dose, and 30% are fully vaccinated. Driciru said the sisters had been major contributors to these figures.

"This number will keep growing because the campaigns are still on," she said. "Schools in Uganda have recently resumed after two years in lockdown, and everything seems to be returning to normalcy."

Kisakye concurred: "I don't have the exact figures through their awareness campaigns, but I am sure many people have been vaccinated because they trust the religious nuns. The vaccination efforts have been teamwork because we had our part to play. The government has also made tremendous efforts to ensure that vaccines are available for everyone." 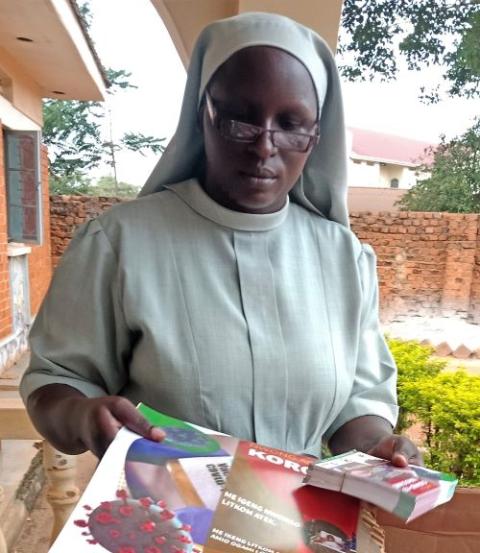 Sr. Winnie Tali of the Missionary Sisters of Mary Mother of the Church displays posters with messages encouraging residents to get vaccinated. The sisters distribute posters and leaflets to ensure people are vaccinated across the country. (Courtesy of Mary Lilly Driciru)

Some of the residents told Global Sisters Report that sisters did play a role in increasing vaccine rates.

William Mukose, 32, had vowed never to be vaccinated after some of his neighbors who had been vaccinated had strange illnesses and skin rashes. They were also feeling weak the day after being vaccinated, and he believed the vaccines were the cause, he said.

"But one day, when I was attending Mass at the church, the sisters were given time to address us, and they told us about the vaccines. At first, I had doubts, but then one day, when I was doing my business at my eatery, I heard the sisters again talking about the vaccines on the radio. Because of this, I was convinced," said the father of one, who owns a restaurant in the capital, Kampala. "I have received my first and second doses. My entire family is vaccinated and even the people who work for me. We are ready to fight this disease by taking care of ourselves and our customers."

Driciru said she hopes the combined efforts by religious sisters will see everyone in the country vaccinated before the end of the year. She said the sisters are now carrying out vaccine campaigns in schools to ensure everyone is vaccinated.

"We are now dealing with the school-going children so that they also receive the vaccines and agree to get vaccinated," she said. "Our target is to make sure we reach everybody and our entire country is vaccinated."

Related: Sisters in Africa debunk myths and educate people to get the COVID-19 vaccine