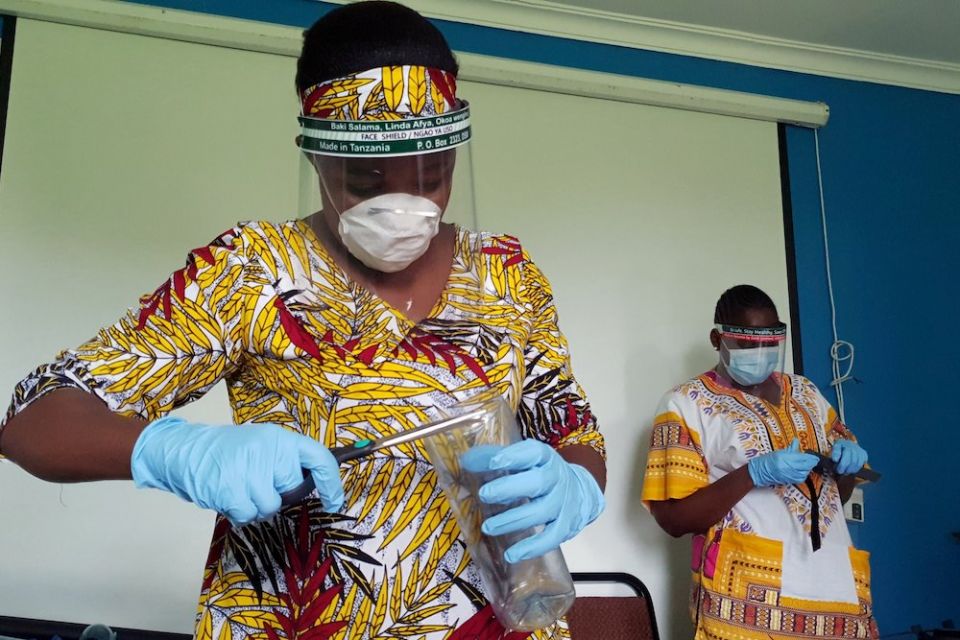 Workers prepare protective face shields from recycled plastics at the Zaidi Recyclers workshop in Dar es Salaam, Tanzania, May 21, 2020. Although the Catholic president of Tanzania has downplayed COVID-19 testing and vaccines, the church is telling people to take preventive measures. (CNS/Reuters)

Editor's note: After publication, the sisters interviewed for the story asked for their identifying details to be removed out of concern of retribution from the government. This story was updated at 8 a.m. Central time March 5.

The recent deaths of the 60 nuns and dozens of priests in the span of about two months in Tanzania has left religious sisters worried and stressed about their safety after church leaders said they died of various causes including respiratory challenges.

Fr. Charles Kitima, secretary of the Tanzania Episcopal Conference (TEC) — an official assembly of Catholic bishops, said in a statement that COVID-19 was alive and urged residents to take the necessary precautions such as wearing masks, washing hands and social distancing to combat the virus.

"Priests are dying and sisters are dying, but this number within two months has shocked us especially considering the Government has strengthened better health systems," said Kitima. "Please continue taking precautions against this disease by following the instructions of the Ministry of Health."

President John Magufuli has severely played down the threat posed by the virus and even declared that the country of nearly 60 million was free of the coronavirus because of the power of prayer — months after his government stopped publishing virus data. The East African nation stopped updating virus data on April 29, 2020, when 509 cases and 21 deaths were recorded.

The president has also warned Tanzanians against COVID-19 vaccines, saying the foreign countries promoting the vaccines have failed previously to help cure other diseases like HIV/AIDS, tuberculosis, cancer and malaria.

But religious sisters have criticized Magufuli and his government for misleading citizens by claiming that prayer will defeat the virus. One of the nuns from the central part of the country said they had lost  hundreds of sisters from the virus since the authority stopped updating cases and deaths of COVID-19.

"I feel very sad whenever I hear about the deaths of my fellow religious sisters," she said, asking Global Sisters Report not to use her name. "The ignorance is really costing us a lot, as we are losing very energetic people who do the work of God. I am worried and I don't know what's going to happen to us since there are no vaccines coming in the country."

Catholic sisters interviewed for this story asked not to be named due to the government's crackdown on expressions of differing points of view. Recently, Magufuli's government arrested critics and closed down three media outlets over COVID-19 coverage.

The nun urged the president to be patriotic and stop playing a dangerous game with the lives of people. The nun said she has recently noticed an unusual increase in the number of requiem Masses being held every week. Some of the sisters and residents have died of acute respiratory failure and pneumonia, she said, adding that, "those who died are said to have had underlying condition like diabetes, high blood pressure among others, but they later on developed breathing problems — but I'm certain it was coronavirus that killed them."

"When the year began, sisters and people from our surrounding parishes started dying, and it was quite disturbing as the rate was too high," she said. "In a week we could bury four or five people and even last week we buried four sisters from the neighboring congregation and a priest."

"This country does not care about its citizens because people are dying and no one cares. I want to tell everyone that there's COVID-19 and citizens should take precautions such as social distancing, hand washing and mask-wearing," she added. 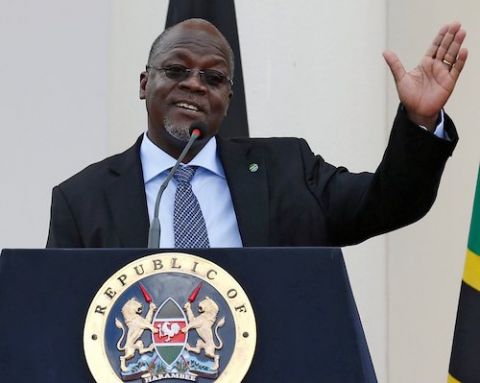 The World Health Organization (WHO) has expressed concern and urged Tanzanian authorities to release data on COVID-19 and implement public health measures to break the chain of transmission of the deadly virus.

"I renew my call for Tanzania to start reporting COVID-19 cases and share data," WHO head Tedros Adhanom Ghebreyesus said last week in a statement, noting that the country has not released information on measures it is taking to respond to the pandemic. "A number of Tanzanians traveling to neighboring countries and beyond have tested positive for COVID-19. This underscores the need for Tanzania to take robust action both to safeguard their own people and protect populations in these countries and beyond."

Catholic Church leaders have recently been vocal after realizing there was a surge in deaths from COVID-19 variants in their parishes. Archbishop Gervais John Nyiasongha said the country was not an island and urged the authorities to accept that the virus was alive and dangerous. Nyiasongha rallied other bishops and priests to provide leadership and guidance to their flock in the fight against the coronavirus from all aspects — spiritual, physical, medical and social.

"With this reality let us not stop advising, encouraging and guiding people of God in this fight against the Coronavirus," Nyiasongha said in a letter. "Let us fight Covid-19 using the spiritual, physical, scientific and social weapons. Let us not stop praying; avoid congested places; wash hands with soap regularly; sanitize; and take appropriate action when see the symptoms."

Sisters ministering in neighboring countries have also expressed their concerns and frustrations, saying that the rate at which the religious sisters and other people are dying should be enough for the government to sober up and take necessary precautions or even get the vaccines.

"Why should we not get vaccines like other countries?" asked another nun from Tanzania who currently ministers in Kenya. "The government is careless in regard to the virus and is quite frustrating; they need to take this virus seriously and fight it like other countries. Our people are dying. I have talked to some of my fellow sisters, and they are worried. Some want to leave the country."

For now, sisters say they have taken sole responsibility to protect themselves to curb the rise in the number of deaths among religious sisters.

"At our convent we are taking the necessary precautions to ensure everyone is safe," said the sister from the central part of the country. "We distance ourselves whenever we do activities such as having meals and praying. Those with flu-like ymptoms are isolated, and we also don't allow visitors inside the convent."

"We are taking individual effort to protect others as we pray for an end to this pandemic," she concluded.

Dormitory expansion in Tanzania is slow but keeps girls in school

To baffle, to build

Living in a COVID-19 world: focusing on what we can do