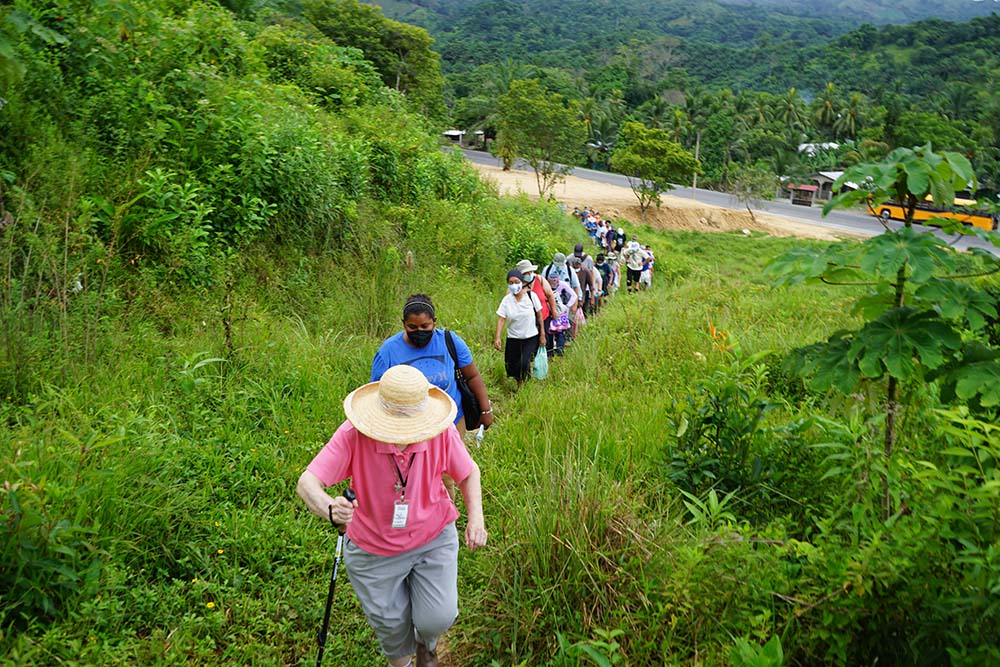 A 24-person delegation to Honduras organized by the SHARE Foundation begins to climb up a hillside to visit with the El Aguacate community, which settled an on unoccupied piece of land at the top of a hill after their homes and school were washed away by the November 2020 hurricanes. (Mark Coplan)

In March 2021, I moved to the U.S.-Mexico border in Southern California. I'm an unlikely person to be here. I'm white, non-Hispanic with much to learn about Latinx culture and history. A native English speaker, I grew up with a severe speech impediment (no longer discernable today) and struggle to learn the oral communication aspects of language. I feel my limitations daily.

I am on a spiritual journey of transformation here at the border. The needs are immense, and my ability to respond limited.

From late March until early July, the San Diego Convention Center served 3,213 unaccompanied migrant youth; as a faith leader, I was able to be present to them. With my limited Spanish, I prayed a blessing over each child who chose to come for a blessing. Tears silently streamed from many eyes as I made the sign of the cross on each one's forehead and paused with my fingertips gently touching the side of her face. I wondered when the last time was that this child felt the loving touch and blessing of her mom or grandma.

One little one who couldn't have been older than 5 hugged my leg and sobbed. With all my inadequacy for communication, I turn to God in a distinctive way to ask for God's love and mercy to be felt somehow through my tender touch of blessing and my eyes filled with love.

Regularly, some of my housemates and I walk along the border wall and spend time in contemplative prayer at the point where the wall juts out into the ocean. I saw a boy of about 16-18 years of age cross, and witnessed his arrest within 15 minutes of his crossing. Another person found me and some of my housemates shortly after he successfully crossed undetected with the help of a coyote. A backpack we found with two pairs of jeans, a couple of shirts, an international phone card, and deodorant made me wonder what happened to its owner. 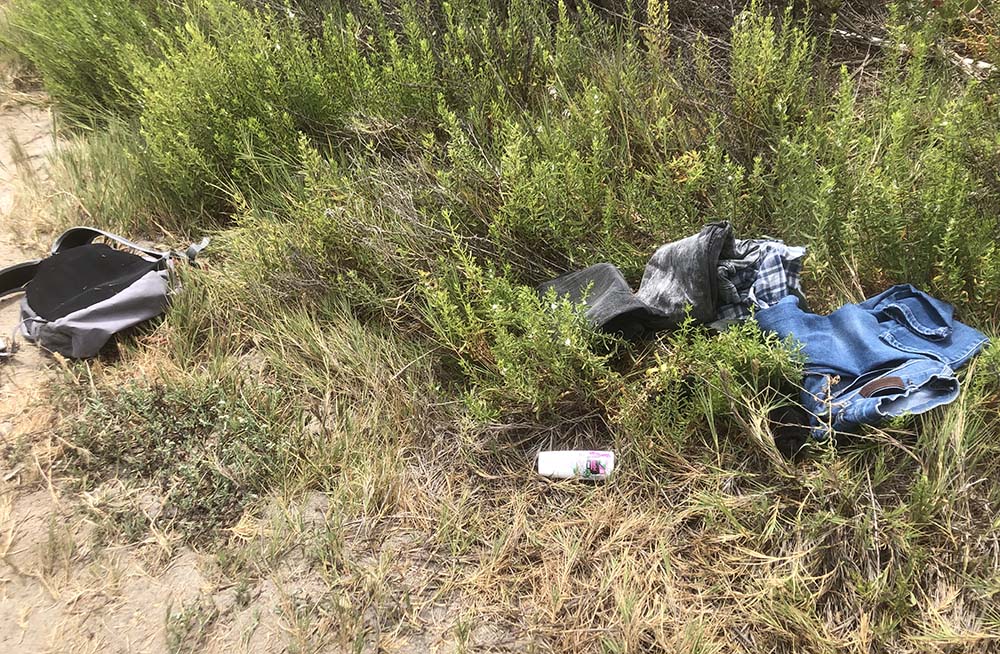 I take all these experiences to prayer and ask God: What is mine to do to break down the borders and walls that keep people divided? I try to do my part to make this space just north of the U.S.-Mexico border hospitable and welcoming.

A few days ago, I returned from a powerful 12-day experience in Honduras. I was part of a 24-person delegation organized by the SHARE Foundation, with support from the Leadership Conference of Women Religious and the Sisters of Mercy. We were in Honduras — hosted by Radio Progresso — at the invitation and request of Honduran environmentalists and grassroots leaders, to show solidarity with the Honduran leaders who risk arrest and even assassination for their advocacy for human and land rights.

The risk that land and human rights defenders face daily is tangible for the people we met.

My motivation to go to Honduras was to be a supportive presence to my Mercy Sisters in Honduras, who had a particularly challenging year with Hurricanes Eta and Iota (November 2020) and COVID-19. In addition, I wanted to learn more about migration and the country from which so many of the unaccompanied migrant youth came.

In my time in Honduras, I learned much about the root causes of migration, but also about the human right not to migrate, and all the obstacles people face who choose that option.

We followed a dirt path and climbed up a hillside to visit with the El Aguacate community. This community had their homes and school washed away by the November 2020 hurricanes. To re-establish their community, they selected an unoccupied piece of land at the top of a hill that has not been occupied or farmed for more than 35 years.

Plastic tarps held up by tree posts form their homes, and they carry water, food and supplies up the narrow dirt path — living with hope that the corn, beans and squash planted will be able to be harvested.

There is a tenuousness about their living: They know that an absentee landowner may forcibly remove them at any time. They are one of 600-800 such hilltop communities that are squatting in higher elevations after their homes and farms were washed away by floods. Despite international aid provided to a corrupt government, levees remain unrepaired, making the return to their original land impossible.

As I looked into the faces of storytellers during our 12 days in Honduras, I knew that I was seeing the face of the suffering Christ. Like Jesus, who risked persecution, political arrest and execution, these Honduran leaders believe in their vision of the kin'dom of God — where all have enough, the land and rivers are protected, and the people can live without fear of gunfire and violence. 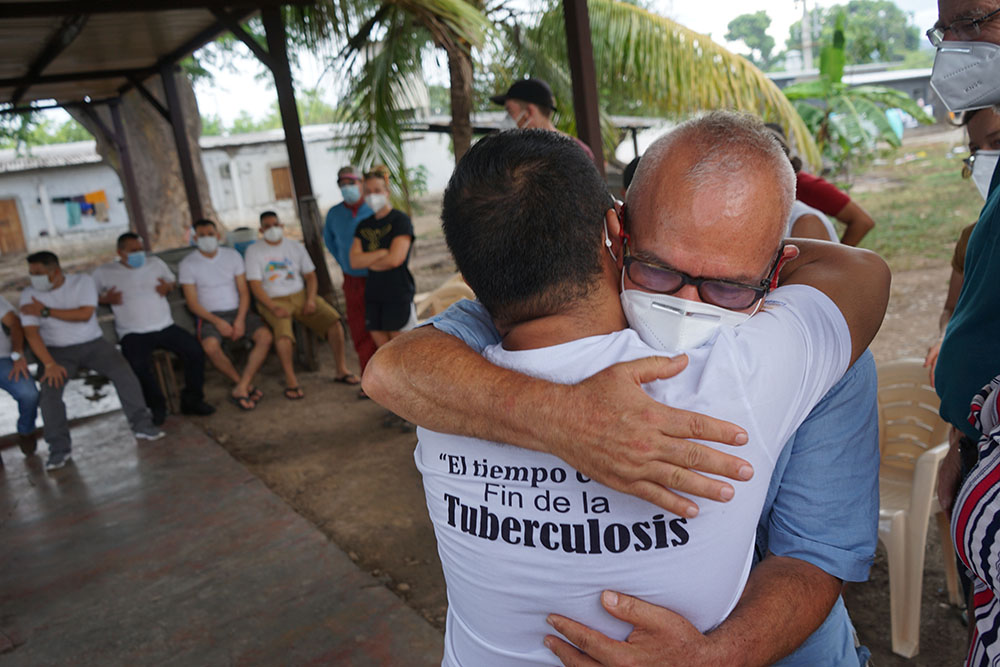 SHARE Foundation director and delegation leader Jose Artiga greets one of the members of the Guapinol 8 who has been incarcerated since 2019 without trial or options for bail. (Mark Coplan)

I have safely returned to my life at the frontera, the border land just north of Mexico. I don't know how those powerful 12 days will change and transform me, yet I know they will. My awe of the courage, determination, faith and resilience of the migrants here at the frontera remains as strong as ever.

I am also in awe of those who choose to stay in Honduras despite the violence, systemic oppression, and unresponsive and corrupt government.

As a privileged U.S. citizen, I have to ask hard questions of myself and my own government. Our government continues to support the oppressive Honduran government and its military and police, who use violence against peaceful protests and crush social movements. I feel a call to add my voice to those advocating for the suspension of U.S. security aid, such as in the Senate's Honduras Human Rights and Anti-Corruption Act of 2021 (S 388), and the companion bill in the House (HR 2716).

I continue to ask: How can I be a face of the mercy and love of God? What do I need to learn to be a catalyst in the transformation of oppressive structures and systems?