'Loving neighbor as yourself implies caring for Earth,' theologian says 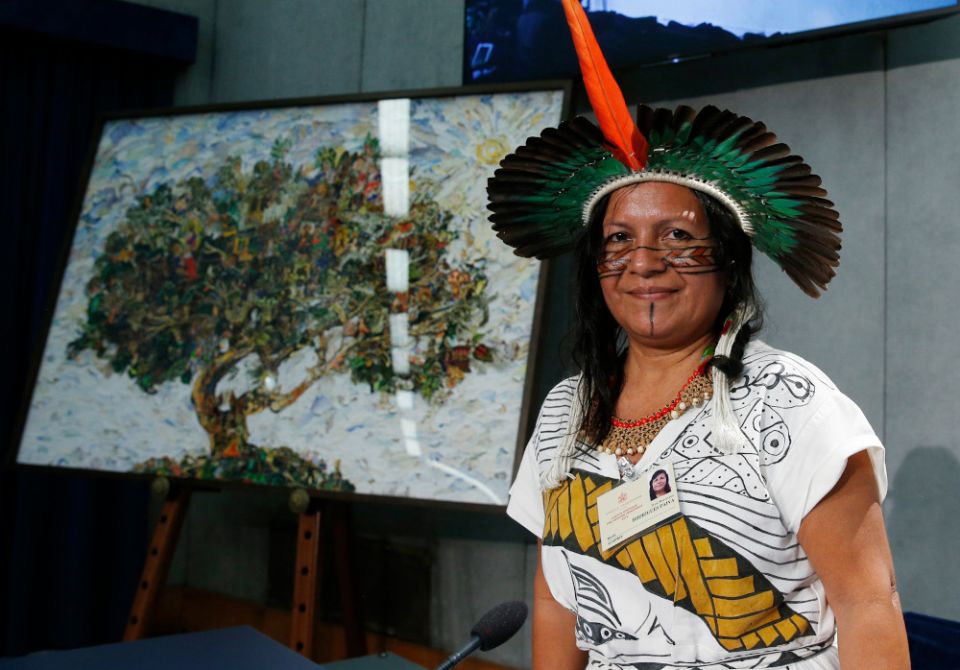 Marcivana Rodrigues Paiva, representing the Satere-Mawe indigenous people in Brazil, attends a news conference following a session of the Synod of Bishops for the Amazon at the Vatican Oct. 21, 2019. (CNS/Paul Haring)

Vatican City — The Synod of Bishops for the Amazon is calling Catholics to an ecological conversion in their personal lives and in the church throughout the world, a theologian participating in the synod said.

A church that walks together, as the word "synod" implies, "is a church that is committed to integral ecology, reminding us that everything is connected," Medical Mission Sister Birgit Weiler, an expert at the synod, told Catholic News Service. "What I do or don't do has an impact on the lives of others."

"Loving your neighbor as yourself implies caring for the Earth," she said. "Everything is interconnected."

This means protecting the environment and the diversity of nonhuman life in the world. It also means acknowledging "our responsibility for the health and future of people who live in situations of poverty and vulnerability, who are the ones who suffer most from pollution" and the lack of basic services such as safe drinking water, she said.

The church's task, Weiler said, is to foster discernment at all levels: individual, parish, diocese, bishops' conference and among the regional groupings of conferences of bishops.

"If you want to live your faith in God coherently, these dimensions must be part of your life," she said. "This is a process of deep conversion, because it implies taking others into consideration and considering the impact we have on the Earth and on the places where we live our daily lives."

In the Catacombs of Domatilla Oct. 20, in a ceremony evoking a similar gathering during the Second Vatican Council, synod participants signed a Pact of the Catacombs for the Common Home, pledging simplicity and a commitment to the poor. One paragraph spoke specifically of environmental commitments.

The participants promised "to assume before the avalanche of consumerism a happily sober lifestyle, simple and in solidarity with those who have little or nothing; to reduce the production of garbage and the use of plastics, favoring the production and commercialization of agro-ecological products, and using public transport whenever possible."

Indigenous people at the synod have spoken of the destruction of the forests and rivers in their territories, much of which is fueled by consumer demand in industrialized countries for beef, hardwood products and other goods.

The question this raises for people in consumer countries, Weiler said, is "What does it mean to have 'fullness of life'? When do I have enough?"

Indigenous peoples in throughout Latin America speak of "buen vivir," a Spanish phrase that is translated as "good living" or as "living well." It refers not in the sense of having many things, but of "enjoying what you have, without the need more and more and more," Weiler said. It implies "connecting with others, in community, and sharing with others."

For individuals, an ecological conversion may involve steps such as commuting by public mass transit instead of driving a car, carrying groceries home in a reusable cloth bag instead of plastic bags, buying clothing made of natural fibers or resisting the temptation to discard still-usable cell phones and laptops in favor of the newest model, she said.

The synod also is drawing connections between products consumed in industrialized countries and their impacts on ecosystems and people in distant places such as the Amazon. Because purchasing decisions can have environmental consequences, an ecological conversion also implies an economic conversion, Weiler said. 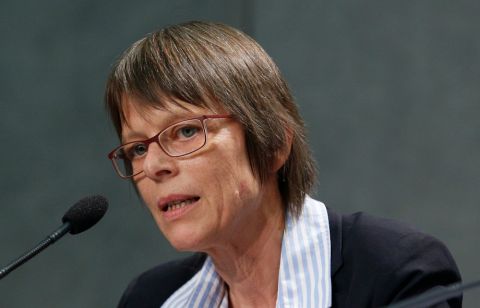 Medical Mission Sister Birgit Weiler speaks at a news conference after a session of the Synod of Bishops for the Amazon at the Vatican Oct. 11, 2019. Sister Weiler said women should be included among synod voting members and in church leadership positions. (CNS/Paul Haring)

A particularly vicious fire season this past summer in the Amazon basin, which made headlines in North America and Europe after it darkened the skies over Sao Paulo, Brazil, was exacerbated by drought and the increased clearing of land for cattle ranching in Brazil and Bolivia, bishops from affected dioceses told the synod.

Beef is not the only Amazonian export that leaves a large footprint in destruction of forests and displacement of people. International demand for gold drives gold miners farther up rivers and deeper into Amazonian forests to blast craters in the Earth with high-pressure hoses in search of flecks of gold.

To extract enough gold for a single ring, miners move a ton of Earth, and the mercury or cyanide they use in the process has poisoned not just rivers, but also fish and the people who depend on fish for food, Fr. Dario Bossi, provincial superior of the Comboni Missionaries in Brazil, told reporters on Oct. 21.

Bossi said the church could send "a very strong sign" if it eliminated the use of gold in its liturgies and sacraments.

Parishes and dioceses should investigate the source of their purchases and avoid buying objects that were produced in ways that harmed people or the environment, she said.

Some steps are already being taken. Parishes are beginning to conduct environmental audits to decrease their use of electricity and water, reduce greenhouse gas emissions, and avoid plastic waste.

Several religious congregations are examining their investment portfolios and debating whether an ecological conversion calls them to divest themselves of all stock in mining and oil companies or keep some shares so they can protest at shareholder meetings.

"The church must accompany people and encourage them" along the pathway to conversion, Weiler said. "If this is done in many places, the church will plant seeds of a way of living, of understanding life, of our responsibility to the Earth."

How do you teach a 'teaching document'? Arizona high school shows how

Planting good seeds in the fertility of the mind: Rise up to the Paris climate pledge