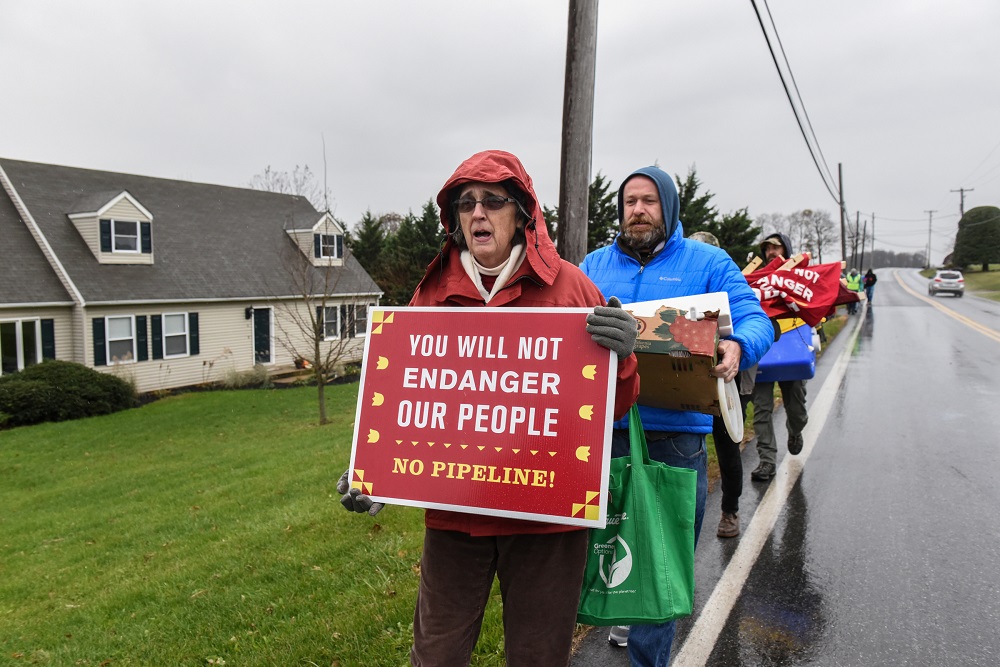 Protesters walk near a construction site of the Atlantic Sunrise pipeline in Holtwood, Pa., Nov. 18, 2017. The U.S. Supreme Court declined Feb. 19, 2019, to hear an appeal by the Adorers of the Blood of Christ that their religious freedom was being violated by the construction of the pipeline through their land in Columbia, Pa. (CNS/Stephanie Keith, Reuters)

Washington, D.C. — For the Adorers of the Blood of Christ, the U.S. Supreme Court's decision not to hear the order's religious freedom claims in a legal challenge to a natural gas pipeline through their land in Pennsylvania came as no real surprise.

"But we needed to see it through and that's what we did," said Sr. Janet McCann, a member of the Adorers' leadership team in St. Louis.

Without comment, the Supreme Court announced Feb. 19 that it had declined the congregation's petition for a hearing.

The Adorers' argument centered on their rights under the Religious Freedom Restoration Act, or RFRA. They maintained that allowing construction of the Atlantic Sunrise pipeline and its use would be contrary to their 2005 Land Ethic, which holds that all of creation is sacred and that it must be protected from desecration.

McCann said despite the court's decision her congregation realized the 19-month ordeal had given it ample opportunity for "continuing to educate ourselves and educating other people and heightening the awareness of what is happening with our earth."

"Also we learned the process of how to stand up and speak out to big, powerful multibillion-dollar corporations," she told Catholic News Service Feb. 20. "We're hoping that our willingness to kind of stumble through all of this will give some encouragement to other individuals, other communities or other entities to do the same."

The Adorers' opposition to the 42-inch transmission line operated by Oklahoma-based Williams began in July 2017. It found them becoming allies with other faith-based and grass-roots activists, namely Lancaster Against Pipelines, which continues to hold vigils and nonviolent protests along parts of the 183-mile pipeline route.

Early on, the sisters allowed Lancaster Against Pipelines to construct a symbolic chapel on their property adjacent to the project's route.

In their petition to the court, the sisters asked the justices to determine how widely government agencies must regard claims under the Religious Freedom Restoration Act and whether a lower court's review of an agency's order satisfies the religious freedom guarantees under the law.

Attorney Dwight Yoder, who filed the Adorers' case, credited the sisters for their prayerful presence as their appeals wound through the court system.

He also predicted that the Supreme Court's decision will have ramifications for other faith-based communities and organizations as they consider legal action based on religious freedom claims.

"This is a violation that's going to continue indefinitely," Yoder told CNS from his office in Lancaster, Pennsylvania. "Here are sisters that have committed their lives to living their faith and part of that is to care for the earth and use their own land in a way that is critical to their faith.

"To have a multibillion-dollar private company to force its way onto your own property and use the federal government to do so seems counter to the basic principles that the country stands for," he said. "The sisters are grieving that they're going to have the pipeline on their land."

Yoder is unsure if any other legal avenues remain for the sisters to explore. He said the option for the Adorers to seek monetary damages for the pipeline's construction seemed to have been left open by the federal court.

"I'm not sure it's something we can pursue," he said, "but we're going to examine it."

Despite the denial, McCann said the effort had been "God-led."

"Perhaps that's a call for all religious women or communities like Lancaster Against Pipelines, all of us, how we can use that gift of community."

Amid biting drought, sisters in Zambia fend off hunger with organic farming

'Hear us' - Demonstrations are integral part of Paris climate talks