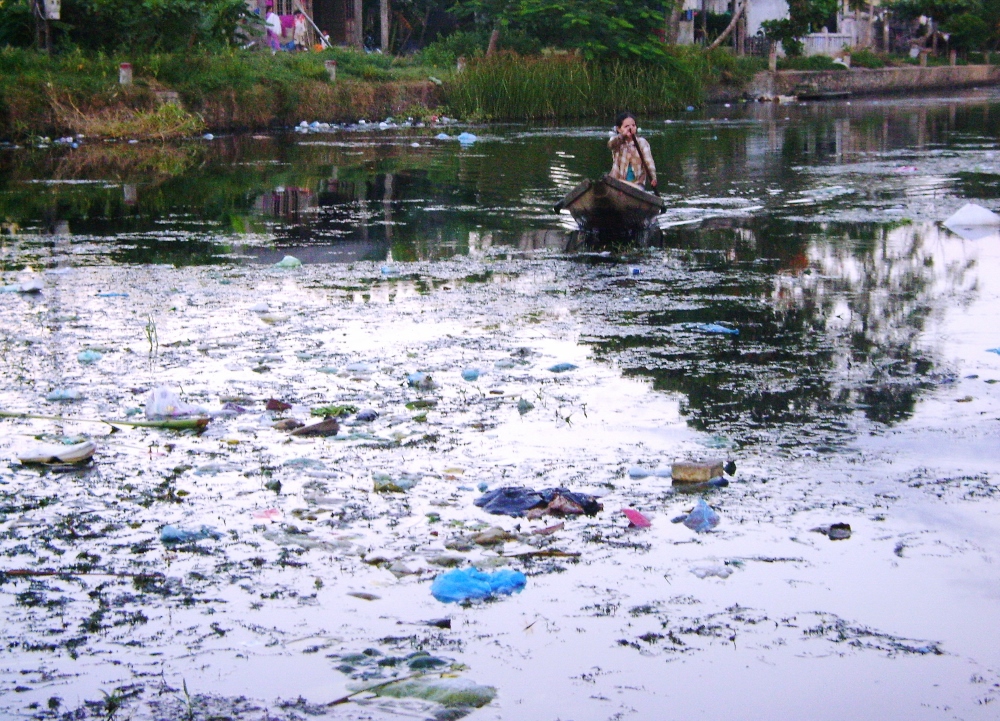 Hue, Vietnam — Religious representatives promised to work to protect the environment and cope with climate change at a national conference that drew 400 participants to this central Vietnam area in early December.

Some 160 religious leaders and social workers from 14 religions attended the national conference called Promoting the Role of Faith-based Organizations in Environment Protection and Climate Change Responses. The Dec. 2-3 conference was co-organized by Norwegian Church Aid, an ecumenical organization for global justice, the National Resources and Environment Ministry, and Vietnam Fatherland Front, an umbrella of the communist party.

Nguyen Thien Nhan, president of Vietnam Fatherland Front, told the conference participants that the environment in Vietnam has been badly damaged by excessive exploitation and overuse, which has seriously affected people's lives. On average annually, the country has 457 injuries or deaths caused by climate change.

He said experts warn that, without adequate attention given to the issue, the country's Gross Domestic Product could lose 3 percent to environmental pollution for every 1 percent it gains.

Nhan urged religions that focus on human development to actively assume their social responsibilities to deal with environmental problems and climate change. The 14 government-approved religions have 22 million followers out of the country's population of 90 million, he added.

NCA General Secretary Anne-Marie Helland said religious groups play a vital role in environmental protection and responding to climate change. She said, although religious people are committed and dedicated, they should be equipped with more capacity, knowledge and experience to be in the forefront of the issue. 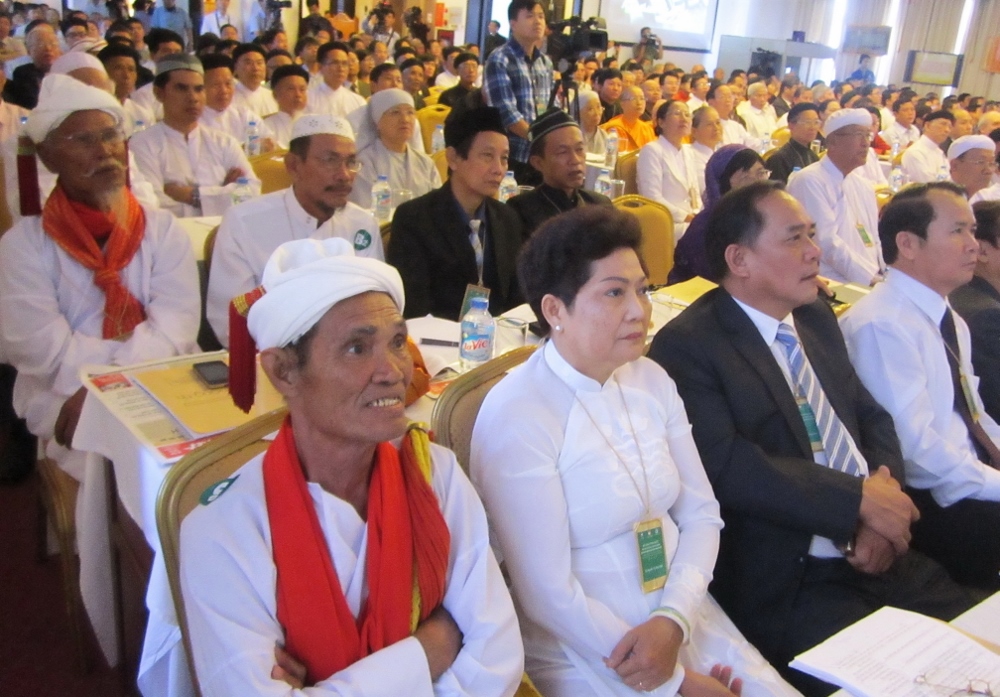 Religious leaders agreed. "To protect the environment means to protect ourselves because we are facing serious challenges and crisis of the environment," said Most Venerable Thich Hai An, vice director of the Social and Charitable Committee of the Vietnam Buddhist Sangha.

An blamed climate change and environment pollution for people's irresponsible exploitation of natural resources. Drought, flood and outbreaks of SARS and MERS viruses, caused by the environmental impact of pollution and increasing climate change, have led to widespread loss of life in the world, An said.

Participants also watched a 30-minute video of recent environmental damage in the country created by harmful emissions from traffic and industries, waste, polluted water, widespread deforestation, lack of rain, floods and earthquakes throughout the country.

Nguyen Ngoc Tran, a dignitary of the indigenous Hoa Hao Buddhism, who was introduced to the conference participants, said humans and all living things only exist and develop in case they have to rely on one another. "This means we have to maintain the biological diversity of creation so that we can live a peaceful life and pursue sustainable development," he said. "We must save natural resources and keep the living world clean, safe and peaceful for all living things."

He said that safeguarding creation means repaying it.

Nguyen Thanh Son, from an indigenous Buddhist sect founded in 1934, said humans living in harmony with nature means they save energy and avoid the depletion of the environment because "the environment will treat us like the way we treat it."

He said individuals and communities that work together for environmental protection safeguard themselves at present and in the future.

The conference included demonstrations by Catholic and Buddhist nuns, who displayed artwork made of used items and paper waste. They competed in cooking and flower arranging and rehearsed rescue operations together. 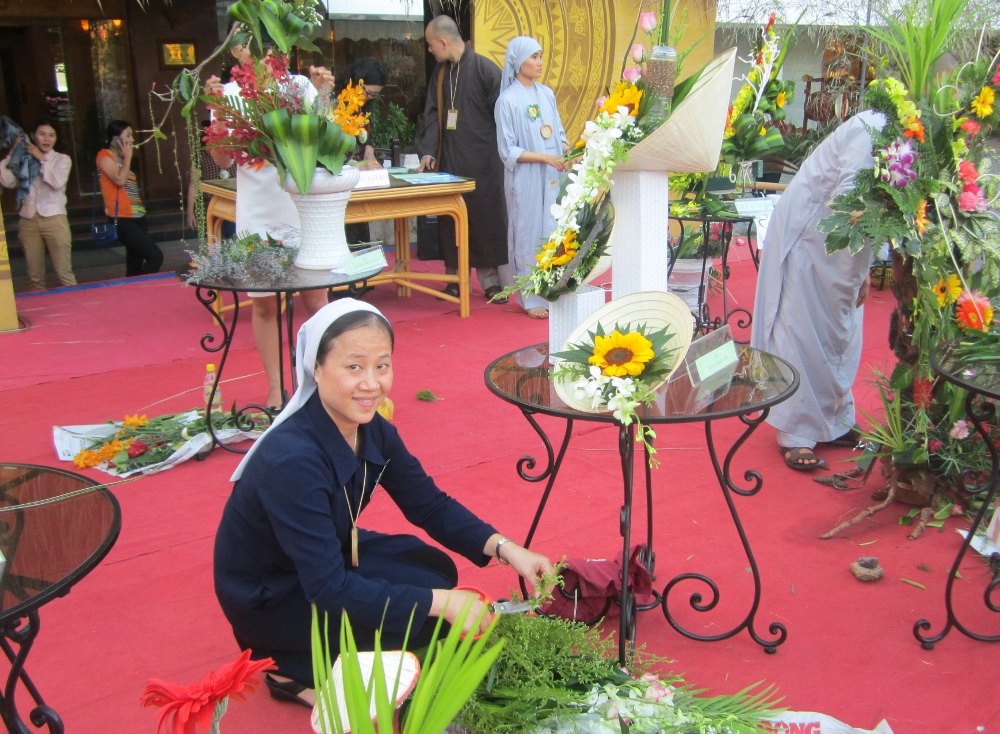 Religious representatives and organizers also signed a joint statement on their commitment to protecting the environment and coping with climate change.

After the conference, some participants shared their plans for environmental protection with GSR.

Sr. Teresa Nguyen Thi Kim Lan of Daughters of Our Lady of the Visitation said her congregation plans to raise awareness of environmental protection among local people at its clinic and catechism classes. They will teach people how to separate organic waste from inorganic waste before throwing them in the garbage, set up groups to collect used items to sell and help poor people, grow flowers in inundated areas and teach vocational skills to climate change victims.

Lan said local congregations have started to install solar heating at their day nurseries, create areas of new forest, open their facilities for people to shelter from storms, and treat cases of diseases related to weather.

Our common home in Honduras

Cleaning up litter, Nigerian students are agents of change