The short rainy season is supposed to start in Kenya in the beginning of October. But this year the first raindrops fell almost a month late, after the news was already full of desperate cattle herders and farmers pleading for water, physically fighting over desiccated water holes. As the October heat wave held its breath in anticipation of the rains, the thunderclouds massed over the streets of Nairobi as if to tease, but the rains did not come on time.

As politicians in America quibble over the existence of global warming, climate change has already become such a part of the lexicon in rural Africa that people discuss it in tandem with the weather, talking of "the Change" with a capital C. When the rainy season becomes increasingly erratic, subsistence farmers do not know when to plant their crops. Living hand-to-mouth with no other options and no margin for error, they can lose an entire harvest when the rains are late.

Increasingly, sisters are discovering that the first victims of climate change are the people they are already serving — the poorest of the poor. Long before Pope Francis codified "care for our common home" in Laudato Si', sisters have been working to encourage environmental projects.

At the "Catholic Sisters: Champions of Sustainable Development in Africa," which convened in Nairobi from Oct. 16 to 19, women religious discussed ways their congregations are working toward protecting the environment, especially for the marginalized people they already serve. Sponsored by the Conrad N. Hilton Foundation and the African Sisters Education Collaborative, the convention focused on fostering partnerships and the U.N.'s agenda for fulfilling Sustainable Development Goals by 2030.

Here, four sisters share the stories of how their congregations are addressing this issue:

We in Ghana engage in health care, but we had never thought of health care as related to the environment. But some of our sisters are working in a Catholic hospital, and a visiting international team of doctors noticed many people have goiters. We took samples from the area to investigate and we discovered there was cyanide in the region. The cyanide is from "galamsey" — illegal gold miners — and this is a big issue. Chinese miners come from abroad — sometimes they even have weapons to protect the illegal mines — and they are destroying the land for crops. It's hard to fight, because the government may also be involved. Oftentimes people involved in illegal mining get a tip-off before a raid by the police.

What can we do as a community? We invited a certain group of people who are advocating for a good earth to help us organize, but they received death threats, phone calls, even threats outside their home at night. They told us, "You sisters must pray in your churches, in your pulpit and classrooms. You need to inform people of the dangers of destroying the environment." Some of the sisters said training is not enough, let's take to the streets and demonstrate! We said we need to be careful about this. I've gotten some ideas from coming to this convening. We can contact people from other parts, organize ourselves and present the evidence of those who are affected. The government comes every now and then and says to the illegal miners, "Oh, you should stop." But we haven't seen any concrete steps against this, which is affecting our water bodies and our food cycle.

It is so clear that climate affects the poor. A looming example of this is hunger, which is so widespread in some areas. People are hungry and looking for help. The government may try to help by giving people a fertilizer subsidy, maybe 10 or 20 kilograms of fertilizer. But when the soil is already sick from pollution, that is not the adequate solution for people in the village. What happens after the subsidy runs out? The fertilizer may only be $5 per bag, but sometimes these people are making just $1 per month.

For our hunger and education projects, we use compost and organic fertilizers to help the people in the village rehabilitate the soil. They can easily make organic compost because the materials don't cost anything. And they need this organic fertilizer so they can get a higher yield from their small plots. Hunger mitigation also conserves the environment at the same time. If people don't have enough food, they don't have time to plant trees.

In Zambia, we experienced drought this year, which is connected to climate change. Last year, a Presentation sister went around the whole country to mobilize sisters to attend workshops on care for the earth. The Comboni sisters in Zambia are in a big project on moringa tree plantations. [The moringa tree is being promoted by the U.N. as a "miracle tree" because every part of it, from the roots to the leaves, is useful, and it is highly sustainable.] They have mobilized people, through this moringa tree plantation, to have an appreciation for saving Mother Earth.

In school, even with the youngest children, we teach them to be aware of climate change and how it's affecting us as a community. Every child has to plant a small tree and care for that tree. But one thing we need to be aware of is these big organizations, like the U.N., give money to the government to address environmental problems, but sometimes that money doesn't trickle down to the communities. Now it is our job to see that the money gets to the sisters and the communities.

As congregations we may have different charisms, but when it trickles down, we are thinking like mothers and sisters to everyone. How are we going to train the communities? How are we going to train the very young? This gives me passion for being a religious woman: We are thinking not just about what is up there in the sky, but also the practical aspect of life. If we really move together, even though we have different goals in our charisms, we are doing something that brings Mother Earth together and is a global development for all of us. 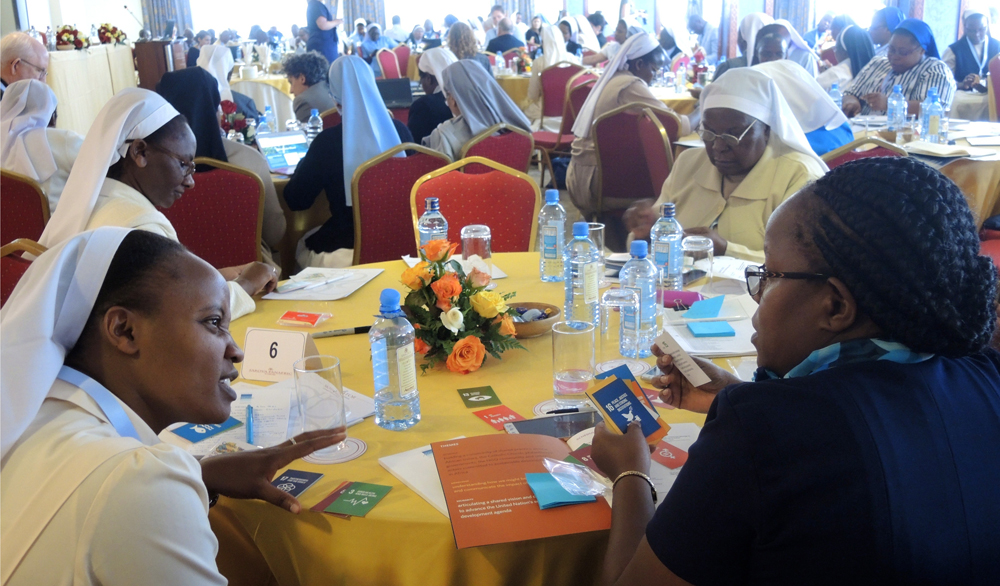 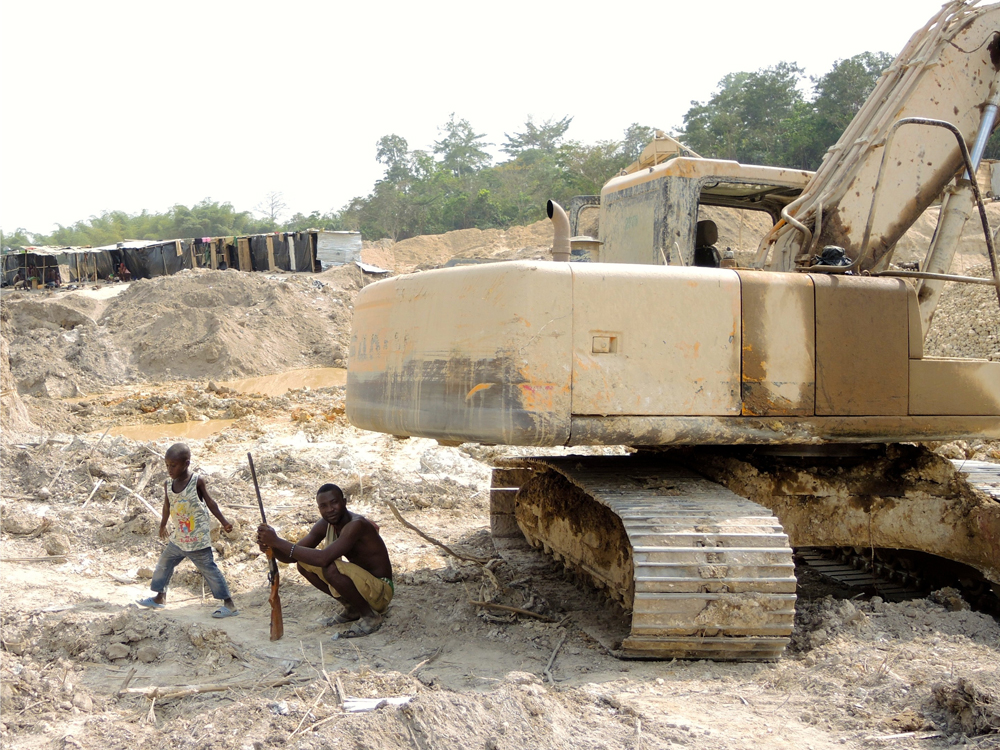 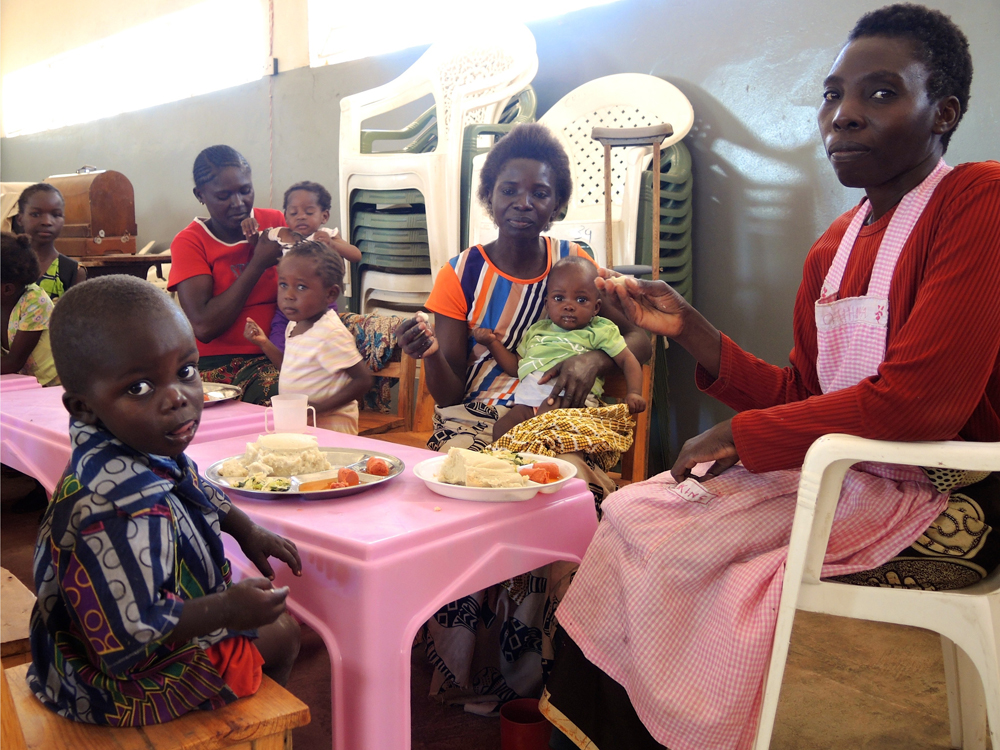 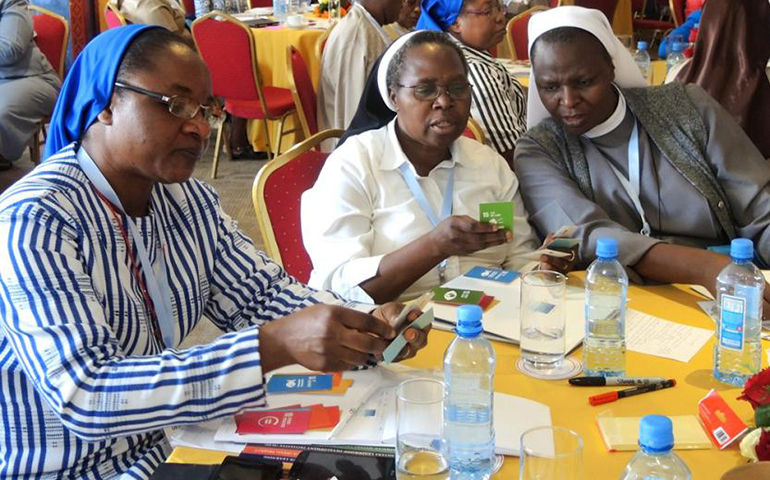