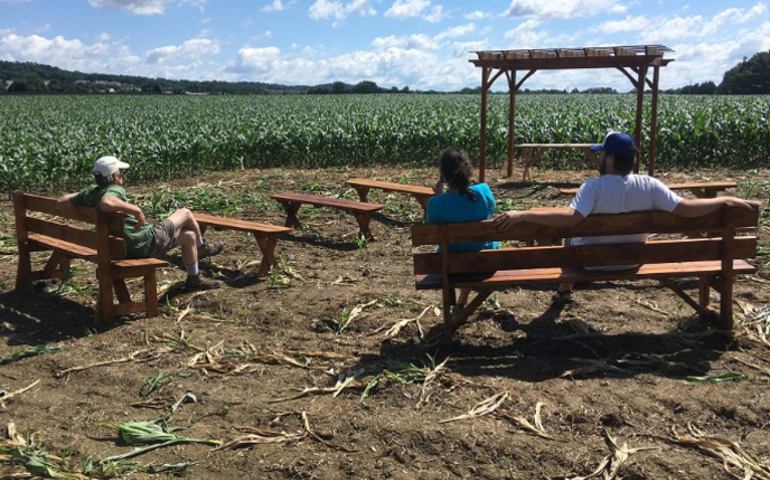 People sit at an outdoor chapel on the property of the Adorers of the Blood of Christ in 2017 in Columbia, Pennsylvania. (CNS / Courtesy of Lancaster Against Pipeline / Mark Clatterbuck)

Columbia, Pennsylvania — A Pennsylvania religious congregation planned to petition the U.S. Supreme Court to consider whether their religious freedom rights are being violated by the construction and pending use of a natural gas pipeline on its land.

The Adorers of the Blood of Christ are rooting their legal argument in the Religious Freedom Restoration Act, saying that their "deeply held religious convictions about the sacredness of Earth" would be violated once the Atlantic Sunrise pipeline becomes operational.

An attorney for the sisters in Columbia, Pennsylvania, contends that the U.S. Court of Appeals for the 3rd Circuit erred in allowing provisions of the Natural Gas Act that govern pipeline construction to supersede the intent of the Religious Freedom Restoration Act, known as RFRA.

The Adorers announced their decision to petition the high court during a news conference Sept. 7 on their property adjacent to the already-constructed underground pipeline.

In July, a three-judge appeals court panel agreed with a lower court ruling that the congregation had not made their religious objections known during the federal administrative process that led to Federal Energy Regulatory Commission approval of the 183-mile pipeline project.

Yoder said that forcing the Adorers to make such arguments during administrative hearings on the project would have placed an unnecessary burden on them under the law.

He said RFRA provides no provision for individuals to "proactively" inform a federal agency or federal employee to comply with the law. To do so "is absurd in our opinion," he said.

Instead, he said, federal agencies are compelled under the law to ensure that RFRA's protections are enforced foremost.

Sister Bernice Klostermann, a member of the congregation who has been involved in challenging the pipeline, told CNS that the order's claims are important in a country in which religious freedom is a cherished value.

"The previous court cases just seemed like there was something not quite right," she said. "As Americans, of course, we have a right to appeal. We want to do what we can to see if we can right this."

The Adorers have long held that allowing construction through their land would run contrary to the congregation's Land Ethic. Adopted in 2005, the document upholds the sacredness of creation, reverences the earth as a "sanctuary where all life is protected" and treasures the earth's beauty and sustenance that must be protected for future generations.

Klostermann said that the pipeline violates the congregation's Land Ethic because leaks of natural gas undoubtedly will occur, polluting the land and air.

"We are really collaborators with God. It's not like creation happened way, way long ago. Creation is a process. God created man and we are right here creating alongside of him. We are co-creators and stewards of the land," she said.

In an Aug. 31 letter to FERC, Yoder called on the agency to stop Transco from operating the pipeline until the Adorers have exhausted their legal appeals.

Yoder also reminded the agency that the 3rd Circuit panel "left open the possibility that the Adorers could pursue a claim for damages arising out of FERC's and Transco's violation of the Adorers' rights under RFRA."

In addition to announcing their Supreme Court petition, the Adorers said at the news conference that they planned to install a solar farm alongside the pipeline. They called the step an act of "resistance" that "would bear witness to clean, sustainable, earth-friendly energy sources."

As part of their plan to stop the pipeline, the Adorers have collaborated with local activists, including the grass-roots Lancaster Against Pipelines. The organization built a symbolic chapel adjacent to the pipeline route where the sisters and local residents have prayed, reflected and discussed actions to block the massive project.

Adorers of the Blood of Christ take pipeline protest to court

Adorers of the Blood of Christ resist pipeline plans

Reflections on the burning cathedral

The Good News of caring for God's creation